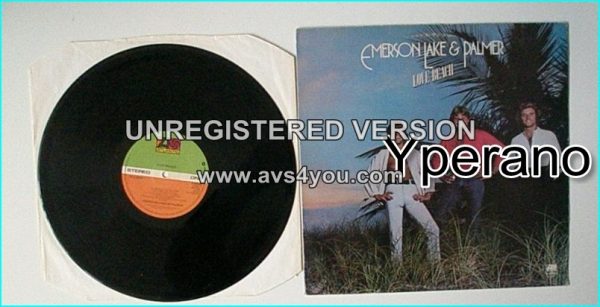 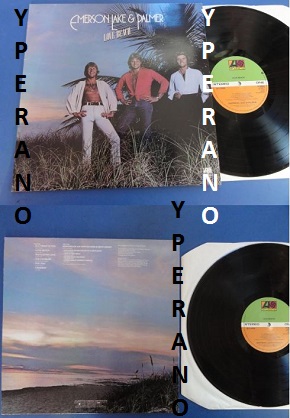 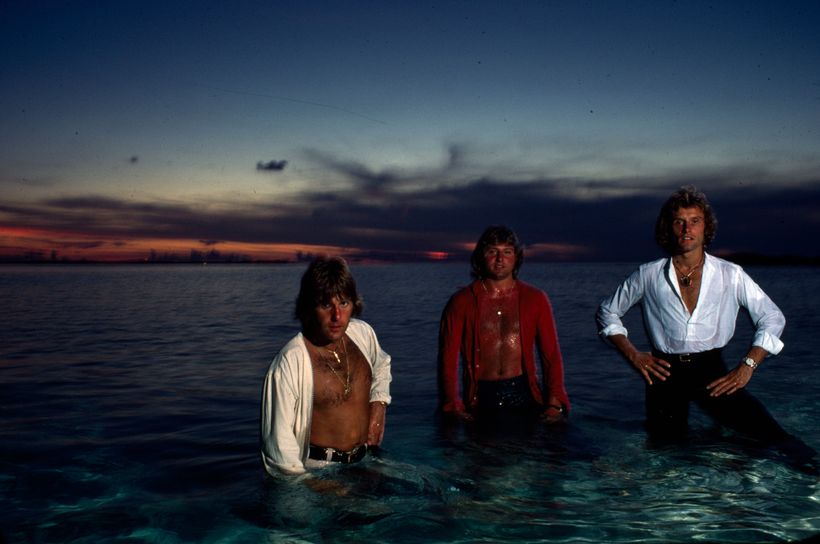 The front sleeve features the band kitted out like the Bee Gees’ less cool older brothers, however the music rules!

Love Beach is a studio album by English progressive rock group Emerson, Lake & Palmer released in 1978. It was the bands final album of original material until Black Moon (1992) and was produced to satisfy contractual obligations with the groups record company.
Original pressings of Love Beach carried no producers credit, but production and mixing of the album were largely carried out by Keith Emerson following contentious recording sessions in the Bahamas. According to Emerson, “everybody but me wanted to get the hell out of Nassau … in the end I stuck the whole album together … and sent it off to Atlantic.”

Don’t be fooled by the Bee Gees-esque cover photo, LOVE BEACH is not really ELP-gone-pop. True, many of the songs are more concise and accessible than those on previous albums, and there are a couple of Greg Lake-dominated “romantic” tunes, but those had always been part of the deal. They’re still at their classical-rocking best on “Canario”, and half the album is dominated by the 20-minute epic “Memoirs of an Officer & a Gentleman”, which stands up well alongside such long-form ELP classics as “Trilogy”.

Love Beach’s best songs are the final 3 tracks. Each represent something that ELP has been known for. “For You” is the Greg Lake ballad. “Canario” is the instrumental adaptation. “Memoirs of an Officer and a Gentleman” is the side-long epic. I think each rank right up there in each category!

“For You” has a more “modern” sound than “Still…You Turn Me On” and really flows so well. If they had released “For You” as a single rather than “All I Want is You,” they might have garnered some radio play. “Canario” is ELP doing what ELP does, and does well. The key track to “Love Beach,” however, is the epic.

“Memoirs of an Officer and a Gentleman” has all the various movements and sections like their more well-known epics such as “Tarkus.” Greg Lake’s voice sounds amazing on the track and Peter Sinfield’s lyrics are touching and powerful. Keith Emerson wrote the music for the track and his playing on it is typically great. Not to be forgotten, Carl Palmer sounds amazing on the entire album!

5.0 out of 5 stars Unfairly misunderstood.

The title and cover are ridiculous and in no way represent the music contained on the album. Greg Lake`s songwriting dominates the first half of the album, his contributions pushing the band in an out-of-character mainstream direction that Keith Emerson obviously has a hard time with. “Canario” is a fine ELP classical interpretation ala “Hoedown” or “Nut rocker”, all the band members shine, Greg Lake`s unusual guitar synth work and Carl Palmer`s “Glitter band” style stompng drum beat being particularly memorable. The second half is a twenty minute piece “Memoirs of an officer and a gentleman”, which is perpetually overlooked in favour of epics like “Tarkus” and “Karn Evil 9”. Although it doesn’t quite measure up to those classics, there is much to enjoy including some fine piano and Fender Rhodes work By Emerson.

5.0 out of 5 stars Side one – no. Side two – well, maybe…,
When Love Beach came out I bought it slavishly.  I could not see where all the poisonous criticism came from: there were good – no, GREAT things on it.  Was it perhaps the IMAGE that was getting in the way?

So I thought I’d listen again. For what it is worth (possibly zero! – its entirely personal) here is my view of the  music:

The Gambler
———————-
The chorus is great, with Keith laying down a fab blues synth backing (no, honest). And the KE solo is all anyone could wish for. For the love of Pete, whose idea was the girlie chorus? Otherwise very listenable.

For You
—————
Another intro that could be building to a classic ELP track, and Keith plays great piano under Gregs lead guitar line. The lyrics have  sophistication. Some great playing from all three here.

Canario
————–
Another promising intro. At last we have some  KE input and I like Greg’s guitar work.

Memoirs of an Officer and a Gentleman
—————-
An arresting opening which leads to some interesting harmonic ideas. And some truly lyrical piano work. The lyrics are interesting – perhaps as good as anything of Sinfields. No worse than Pirates anyway. And there is an attempt at empathy – generally a successful one – with a politically incorrect group: the class that made up backbone of the British Empire.

You can see why the punk generation would not want to hear it. But a story is definitely being told, with the words and music beautifully integrated. Some great lyrical ideas: “If you made the first eleven, then you’d be sure to get to heaven… I was taught how to win, and to lose with that ‘get you next time’ smile… When I finally marched from Sandhurst I’d learned to put my fellow man first…”

Keiths extended piano introduction to the love song is as good as anything on Brain Salad Surgery (I don’t recognise which piece of classical music its pinched from; if it is original it is terrific.) Again, words and music are brilliantly combined. The piano continues and Greg’s acoustic guitar solo is great, and Carl sticks in some nice glockenspiel. Then – hurray! – they take off all three together.

Ten minutes in, Carl and Keith set up a complex tapestry over which Greg can sing his Letters from the Front – not unlike a less bombastic version of Pirates. The lyrics are moving (“I’m writing to you from a convoy moving west. Its hell out here but we are trying to do our best”). Greg’s switch of octave for “The telegram…” is brilliant.

Finally, ‘Honourable Company’ starts up. Its going to be another Abaddons Bolero – hooray! Sounds like an ordinary march – till you notice the interesting time signature. And  the intro doesn’t disappoint. It DOES build imaginatively – I reach to turn up the volume. And with each new layer Keith adds something special, so that the downbeat fade-out ending is completely satisfying; a bombastic triumphal ending.

Overall
———- Memoirs seems to me to be the most under-regarded piece in the ELP cannon (spelling mistake intentional!). Lyrically it is a hugely brave attempt to empathise with a social class and generation that are quite foreign to our own; the music suits the content brilliantly, and all three contribute to the magic mix that was ELP. ELPs mastery of contrast was unmatched – and perhaps remains so: the light and shade of Memoirs is expertly handled, and generates a work that is both varied and coherent, and at its best genuinely moving.

I play Memoirs again… Yes: its worth the price of the album on its own.

As for the cover, have people forgotten what the 70s were like? I’ve got a dreadful feeling I dressed like that occasionally…

5.0 out of 5 stars gem containing their final masterpiece,
To be honest the vinyl version is a game of two halves, the first side being pop/rock the second a beautifully arranged concept called Memoirs of an Officer & A Gentleman. The short songs are pleasant enough soft rock but for an ELP fan at the time it must have been a big shock after all the genuine prog classics they produced just a few years beforehand. Because of this the side long concept which is in my opinion one of Gregs finest vocal performances and some great music, has been overlooked. This concept is still not prog but time has been kind to it and unlike many prog pieces from the past this one does bear repeated listens. The beautiful piano on “Love at First Sight” is a development from the Chopin piece Opus 10 Etude No.1 and is a triumph with wonderful playing from Mr Emerson and a surprise bit of classical guitar by Mr Lake in the middle, the only bit of acoustic on the album! Please give the concept piece a listen its one of my favourite things ELP ever did, even my wife likes it and she hates ELP!