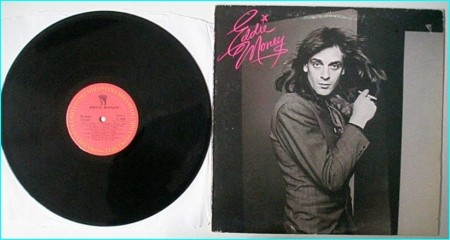 Eddie Money (born Edward Joseph Mahoney, March 21, 1949) is an American rock singer-songwriter who found success in the 1970’s and 1980’s with a string of Top 40 hits and platinum albums. His musical style is characterized by his recognizable vocals and memorable melodies, and his numerous MTV music videos during the 1980’s

Eddie Money is the self titled debut album by American musician Eddie Money originally released in 1977.
Containing two songs that achieved generous radio airplay (“”Two Tickets to Paradise”” and “”Baby Hold On””), the album peaked at #37 on the charts, establishing Money as a successful artist. “”Two Tickets to Paradise”” remains one of his most frequently played songs.
This album features Eddie Money on Vocals, Jimmy Lyon on guitar, saxophone player Tom Scott, and former Steve Miller bassist Lonnie Turner. Lyon also co-wrote about half of the album tracks, yet he would leave the band in 1982.

He was pushing 30 when his debut album came out. Not exactly a new kid on the block. And that was part of his appeal: a guy with lived-in looks and a voice to match, full of character, emotion and believability.

As Money recalled: “The first record was really from the heart, a personal and observational album.” He also stated frankly: “I always had bubblegum songs, because I wanted to sell records.”

This combination of emotional depth and pop savvy was perfected in the hits Two Tickets To Paradise and Baby Hold On. And as confirmed in a beautiful version of Smokey Robinson’s You’ve Really Got A Hold On Me, Money had soul.

5.0 out of 5 stars This debut and “”Life For The Taking”” ARE my Eddie Money Greatest Hits!,
Sometime in 1976 a friend of mine had the opportunity to attend a special live taping of “”Eddie Money”” for KQED television in a small area at San Francisco Cow Palace. He asked me if I’d like to go see the taping with him.

Nope, we never went to that show! I think we decided that going to see a movie at the drive-in, which was practically next-door to the Cow Palace, with a couple of girls from school was a much better way of spending the evening.

Okay, I’m an idiot on both counts. We didn’t get lucky at the drive-in with those girls…and we missed seeing Eddie Money perform before anyone knew who he was.

I remember hearing this debut album from Eddie Money for the first time. I was really blown away and remember liking it the very first time I listened all the way through. I was into much heavier stuff, but I also had/still have a soft spot for pop music disguising itself as “”Heavy”” rock. Money albums aren’t really “”Heavy””, but they do have a very hard edge and lot of guitar work that could classify him, to some, as a “”Heavy Rocker””.

From his New York accented, sort-of-raspy, Cindy Brady-esque mouth movement style of singing, comes an unforgettable voice that till this day is a one of a kind. With the exception of maybe “”Don’t Worry””, I feel that any of the tracks from this album could have been singles. If you like his 80 stuff, this may be a bit too…umm….RAW….for you. If you just want to hear a great rock record, then it’ll be MONEY well spent.

This combined with his second effort, “”Life for the Taking”” is really all of the eddie Money I need. Anything after seemed to have been the record companies taking over and pushing the AOR bit for Eddie.

Every track on his second effort is also a gem…well, maybe except for the biggest single from that one. Anyone remember the track “”Maybe I’m A Fool””? Eddie with a disco-styled song…Still, it does work. You won’t find one like this in his debut effort though. His first two albums could have been released as a double set and they sound like maybe they came from the same sessions. (I remember seeing some of that performance from the KQED special and I think he did, “”Gimme Some Water”” live even before the first release.)

Doubts? Go buy it, listen and dare to write me and tell me it not a great Rock record! I dare ya!

5.0 out of 5 stars Pretty Dang Good,
Eddie Money first and probably his best. Every song is good here. I wish he had been more consistent with later recordings. Although later individual songs were great, this would have to be his best record. It is classic rock from beginning to end. I don’t get tired of listening to it.

5.0 out of 5 stars Eddie Money Debut Is Great,
Eddie Money self-titled debut album is a great piece of straight rock. Such songs as “”Baby Hold On”” and “”Wanna Be A Rock And Roll Star”” are among the songs that dominated AM radio in 1977. There are a couple of filler cuts here, but get this one, LIFE FOR THE TAKING, and NO CONTROL, and you have all the Eddie Money you really need.

5.0 out of 5 stars Most Excellent Cruising Music,
This is one of the best Rock n Roll albums ever made. Only good to great songs. “”Save A Little Room In Your Heart For Me”” is a wonderful love ballad of longing that I used to play repeatedly while chasing my (now) wife. It is followed immediately by “”So Good To Be In Love Again”” (that I have CRANKED at my office right now…) which tells WHY chasing my wife was worth it. Maybe the best back to back set of rock and roll love songs recorded.
I recall that this was Eddie Money debut album and like a few other great debuts it captures lightning in bottle. As a debut, “”Eddie Money”” is on par with Elvis Costello “”My Aim Is True”” and Sprinsteen “”Greetings From Asbury Park””.

Great guitar riffs, driving beats, and Classic songs you haven’t heard enough of. Buy it. Crank it. Just leave it in the turntable and let it loop”

and a parody /cover version: