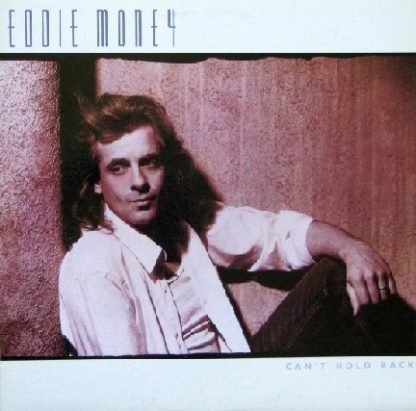 EDDIE MONEY: Can’t hold back LP 1986+ inner. Check videos Take Me Home Tonight, I Wanna Go Back, Endless Nights, We Should Be Sleeping. Check the covers of his hit by other bands

Can’t Hold Back is Eddie Moneys sixth album, released in 1986. It contains the hit single “Take Me Home Tonight”, the biggest hit song of his career. Take Me Home Tonight was a zinging rock’n’roll track co-starring one of his favourite singers, Ronnie Spector, reprising the Ronette’s classic Be My Baby. It shot to No.4 in the US, helping drive its parent album to platinum status.
Another hit followed with I Wanna Go Back, a great song by little-known American band Billy Satellite, recently covered by Ace Frehley. Quintessentially 80s anthem Stranger In A Strange Land, one of the album’s deep cuts, was later covered by The Who bassist John Entwistle.

1986s Can’t Hold Back, is an album which netted him three Top 40 hits and eventually gained platinum status. With some vocal help from Ronnie Spector and some exuberant sax work, “Take Me Home Tonight” emerged as Moneys highest-charting hit, going all the way to number four as the albums lead single. Following this, “I Wanna Go Backs sincere, semi-ballad charm peaked at number 14, while “Endless Nights” went to number 21 in May of 1987. Not only does Money have a perfect balance of catchy, hook-induced music and well-written lyrics, he also sports more confidence and energy throughout Can’t Hold Backs material than ever before. Although tailored for radio, the songs aren’t hindered by what could have been a mediocre, humdrum rock formula. Instead, Money infuses enough of his slightly sexy vocal character into the cuts to give them the added sparkle and crispness needed to rise above his past endeavors, evident in even the non-hits like “We Should Be Sleeping,” which just cracked the Top 100 but is a fine single nonetheless, and on both “I Can’t Hold Back” and Stan Meissners “One Chance.” Upping the ante from 1982s No Control, Can’t Hold Back exhibits the type of music Eddie Money was meant to make, and its at par if not better than his first couple of albums.

I’ve followed Eddie Money for many years but didn’t become a fan/critic until his 1986 Can’t Hold Back release. This should be the first cd you buy from him because its his most consistent. If you only want his hits get his greatest hits. On Can’t Hold Back, Eddie did some of his best work: “Take Me Home Tonight”, “I Wanna Go Back”, “Endless Nights” were all top 40 hits. But, unlike his other albums he has strong non-hits like “We Should Be Sleeping”, “Bring on the Rain”, “Stranger in a Strange Land” and “One Love.” After Can’t Hold Back, Eddie slips with Nothing to Lose (1988) being a re-tread of Can’t Hold Back. In 1991, he released another cd that REALLY wasn’t very good and his 1995 cd was just plain awful. I didn’t bother to buy his 1999 cd. So, I’d say everything from 1988s Nothing to Lose back to his debut, Eddie Money (1977), is worth looking into.

Classic rock fans, don’t hold back on getting this one!
I already owned Eddie Moneys Super Hits album and I have listened to his Greatest Hits Sound of Money album and I like them both, but that wasn’t enough. I wanted to hear some of his regular albums that had both hits and non-hits included. My first stop just happens to be this mid-80s gem entitled Can’t Hold Back.
Included on Can’t Hold Back is the major hit “Take Me Home Tonight,” the inspirational hit “I Wanna Go Back,” and the very underrated minor hit “Endless Nights.” If I’m not mistaken, “We Should Be Sleeping” was also a minor hit. But the greatness doesn’t stop there because there are many great non-hits that also make their voice heard on Can’t Hold Back, making this a worthy all-around album. My favorite of the non-hits is “Bring On The Rain,” and the title track isn’t bad either.

The only complaint I have with Can’t Hold Back is that I wasn’t crazy about two of the songs, “Stranger In A Strange Land” and “One Chance.” So that means that I liked eight of the ten songs on the album, and that would equal four out of five stars if I was rating Can’t Hold Back in that matter, but I’m not.

“Take Me Home Tonight” was one of the biggest hits of the year (1986), “I Wanna Go Back” is one of my favorite songs of all time, mainly because of its lyrics that a lot of people including myself can relate to, and all in all, Can’t Hold Back is probably one of the most overlooked albums from the 1980s. If you like classic rock, don’t hold back on getting this album because its more than worth the money.

Excellent Release by a Legendary Rocker….
This is DEFINITELY one of Eddie Moneys greatest albums of all time. Just about every song on this CD deserved to be a smash hit — especially “One Chance”, where he drives the vocal tracks straight home with absolute heart-felt emotion and finesse. He also paired up with Mr. Misters Richard Page and Steve George on this one, who had provided the background harmony vocals. I especially like the ending of “One Chance”, where the full band is faded out and Richard and Steves vocal tracks finish the ballad with “Can’t let it go on this way…(CLAP!!) Gotta get out of the rain…” Each and every time I hear those lines at the end of “One Chance”, the hair stands up on the back of my neck and it sends a quivering chill up and down my spine!

Aside from “One Chance”, pretty much most of the other tracks here are classic songs by the Money Man. My favorite track of the hit list here is “Take Me Home Tonight”, which is almost as hard-hitting as “Walk On Water” from 1988s Nothing to Lose release. The latter is also a good album to pick up, and I have a copy of it as well.

Anyway, if any of you are into that hard-driving, 1980s-style, power-ballad rock style of music then I would highly recommend this album for your media collection. Besides, after getting to hear “One Chance” for the very first time back in 1989 (after getting my first cassette copy of this album), I once had this short-lived inner desire to meet Mr. Eddie Money. But that, of course, is nothing more than wishful thinking.

Be the first to review “EDDIE MONEY: Can’t hold back LP 1986+ inner. Check videos Take Me Home Tonight, I Wanna Go Back, Endless Nights, We Should Be Sleeping. Check the covers of his hit by other bands” Cancel reply 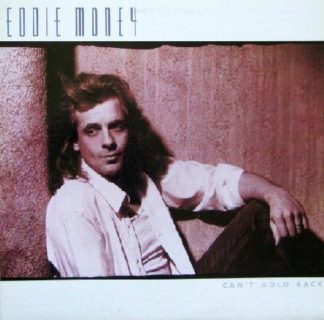 You're viewing: EDDIE MONEY: Can’t hold back LP 1986+ inner. Check videos Take Me Home Tonight, I Wanna Go Back, Endless Nights, We Should Be Sleeping. Check the covers of his hit by other bands £4.80
Add to basket