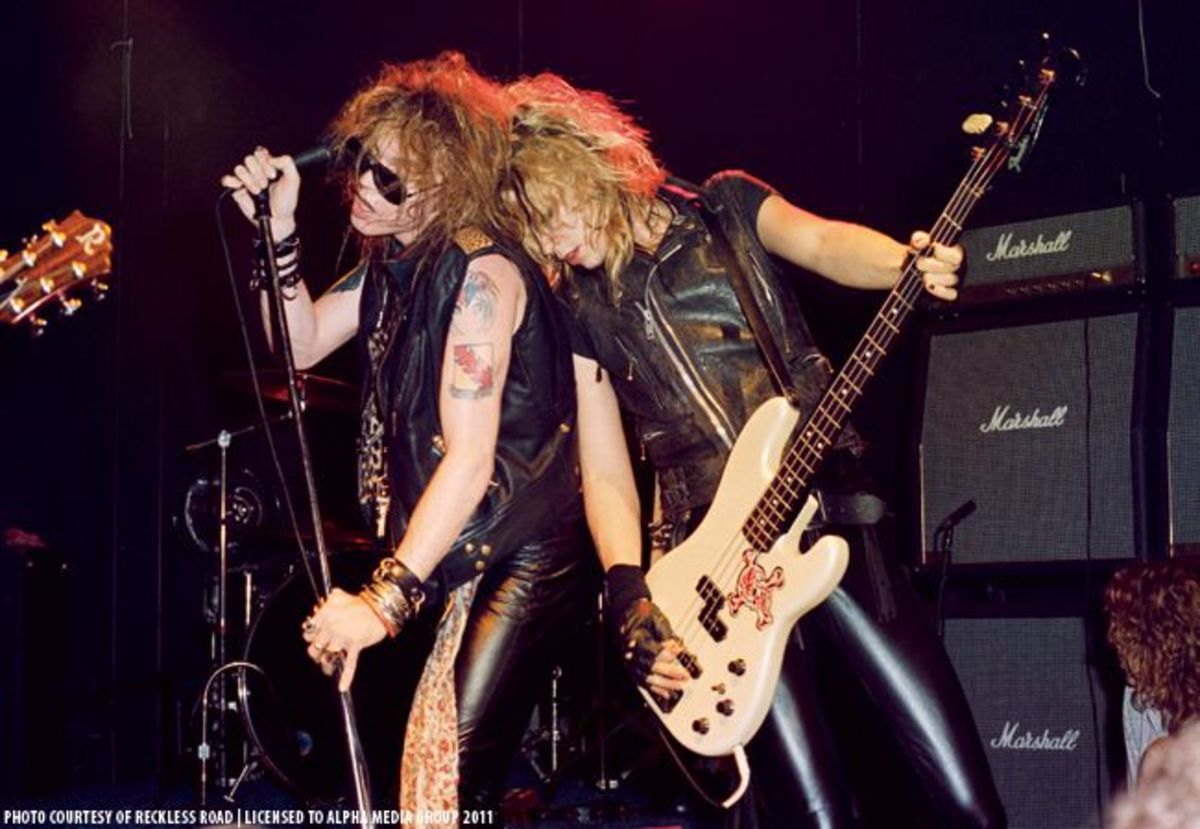 I can’t believe people have criticised this album so badly it a raunchy punk rock record full of great riffs and excellent lyrics yes i must say duff mckagan voice is unusual but lets not say it not a bad voice it a rough around the edges voice but once you get used too it..and once you get used to the diverse music on this album you’ll love it.
He made this while the double albums use your illusions were in the progress…and one song was initially going to be put on use your illusions.
Great album from the master who made the bass fashionable;
Duff mckagan believe in him.

In 1993 Duff McKagan was not clean yet, at least not for good.  It would take a critical medical emergency for him to get close enough to death and stop drinking.  The cover of Believe in Me, a skeletal Duff bathing in a martini glass, reflects the last of the old Duff.  It was his solo debut, following Izzy but before Slash.  Guns’ own Spaghetti Incident? hit the shelves two months later, as the end of the original band creeped on the horizon.

Fans were probably experiencing a bit of Guns overload.  Two albums, two live concert video tapes, loads of touring and music videos…Guns were everywhere from 1991-1993 and then it was the dawn of Guns solo albums.

Duff’s solo debut was a grab bag of different styles:  punk, rock, funk, jazz and ballads.  It was also loaded with rock star guest shots:  Lenny Kravitz and Sebastian Bach sang one song a piece.  Dave Sabo and Rob Affuso from Skid Row joined Baz on the album while Slash laid down a couple trademark dirty guitar solos.  Jeff Beck dropped by, and just about every Guns member except Axl himself contributed.

The best tracks tend to be the rockers.  Opener “Believe in Me” was a very Guns-like single:  short, sweet, catchy and with a Slash guitar solo to hit it home.  “I Love You” isn’t a ballad despite the title, in fact it’s a rocker and perhaps the best tune on the album. “Just Not There” also rides the GN’R train, normally bound for hitsville.  Sebastian Bach’s “Trouble” is plenty of fun, and Lenny Kravitz gets angry on “The Majority”.  These songs would have made a fine basis for a Guns album, but Axl wasn’t looking for songs that sounded like Guns N’ Roses.

An angry “(Fucked Up) Beyond Belief” (a song birthed from GN’R rehearsals) is noisy punk-rap, while “Fuck You” itself is basically a rock rap song featuring a guy named Doc.  “Punk Rock Song” is exactly what it claims to be.

During the period that Guns N’ Roses were inactive or just working behind closed doors, a lot of these solo albums really represented an alternate universe.  “What if the original members didn’t leave and instead recorded a new album?”  It’s possible these songs or songs like them could have been on that hypothetical album.  Instead, Believe in Me was a launch pad for plenty of Duff projects and albums:  Neurotic Outsides, 10 Minute Warning, Loaded, Velvet Revolver and many more.  Duff has proven that clean and sober, he can be one hell of a prolific songwriter.  Believe in Me is a good introduction to the many stylings of Duff McKagan.