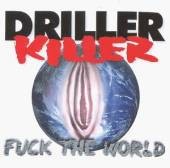 These guys are really hard to categorize. There’s aspects of metal, punk, crust, hardcore, thrash and all that good stuff. I’d definitely say that thrash, punk, and metal dominate. One consistency across the board is that scent of Swedish background and influence you get from good Scandinavian bands. I would definitely say “”Fuck The World”” is very comparable to Disrupt or even Doom. The vocals on “”Fuck The World”” remind me a lot of the low end vocals of Disrupt; low and guttural but still more understandable than a alot of stuff in this vein of music. Driller Killer have more of a metal presence than a lot of scandi-thrash bands I’ve heard, especially in the guitar solos which are filled with lightening licks and the technicality of a speed metal band. The drums are a lot like Disrupt or Doom as well, played at break neck speeds with the occasional break down. However, even their “”slower songs”” are still fast as hell. I really liked the lyrics which are incredibly short and simple, but just plain fucking merciless with no emotional bullshit attached and no over-wordiness. They’re mainly concerned with pure hate and loathing for just about everything that is slightly deserving ranging from the church to the douchebags within the scene. This album is a shitstorm of badassness that I would recommend to those who fancy Disrupt, Doom, or anything of the like. 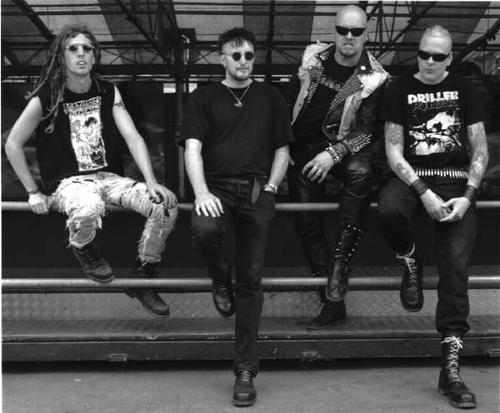 The Swedes DRILLER KILLER are hitting hard with this Hardcore Punk Dynamite! Infernal guitars with the smashing drums and the rabid vocals. The group’s sound has many influences from the Death Metal scene, namely something like Death X core. These guys are insane!!!