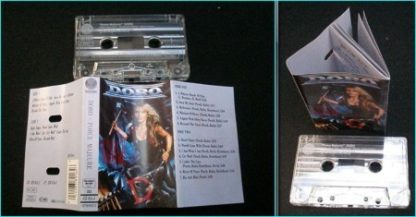 Force Majeure is the first solo album of the German female hard rock singer Doro Pesch. The album was released in February 1989.
After the success of Warlock’s album Triumph and Agony, which gained Gold status in Germany and reached the top 100 chart in the USA, Doro Pesch remained the only original member of the band. Some legal issues about the use of the name Warlock were raised by the former band manager and Doro settled the dispute, renouncing to issue any new album with the band’s name, but using her name instead for any new releases. However, the first print of the LP was issued with a sticker on the cover near Doro’s name with “”+ Warlock”” written on and for some fans Force Majeure should still be considered as the last album by Warlock.
Just like Triumph and Agony, the album was recorded in the USA and produced by Joey Balin. Bass player Tommy Henriksen, who was part of the last line-up of Warlock plays in this album, too. The line-up is completed by drummer Bobby Rondinelli (Rainbow, Scorpions, Quiet Riot, Black Sabbath, Blue Oyster Cult,) and guitarist Jon Levin, whose name was incorrectly reported as Jon Devin on the album sleeve.
Trying to follow the positive American feedback of the previous Warlock album, the songs of Force Majeure are even more oriented to radio-friendly pop metal than to the European power metal of Doro’s earlier works and include for the first time a cover, the famous Procol Harum’s “”A Whiter Shade of Pale””. The album sold quite well in Europe but had a limited success in the USA, reaching only the top 200 chart.

Force Majeure is the first solo album of the German female hard rock singer Doro Pesch. The album was released in February 1989. 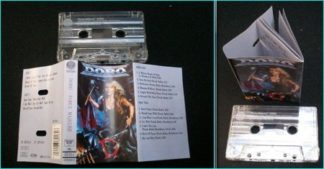