Recorded a mere nine months after their debut, Communique has often been written off as a mere carbon copy of the Dire Straits’ first album featuring less compelling material. Recording took place in the Bahamas with top production team Jerry Wexler and Barry Beckett and mixing at the famous Muscle Shoals studio; it consequently features a delicate and supremely balanced sound. Yet even Knopfler has said of this album that the tropical breezes made his song writing “lazy”. Whilst being unnecessarily self-deprecating, this has an element of truth about it and at the same time is precisely what is so engaging about the album. It is true that Knopfler doesn’t do as much to the songs hes written as on other albums–his guitar playing does not feature the same consistently bubbling energy of his work on the first album. But this gives a little more space for the rest of the band to shine. Pick Witherss drumming is especially hypnotic and David Knopflers intuitive rhythm guitar interplay with his brother comes across well. Overall, the consistently dreamy atmosphere of the record is decidedly captivating, and the most fully realised tracks, particularly “Once Upon A Time In The West” and “Portobello Belle”, are among their best-ever material. “Where Do You Think You’re Going”, a rather over-zealous attempt to imitate Bob Dylan, is the only song that seems somewhat out-of-place. This was the last album to feature the original Dire Straits line-up, with the departure of David Knopfler for a solo career shortly before the recording of Making Movies.

Tracklist
A1 Once Upon A Time In The West
A2 News
A3 Where Do You Think You’re Going?
A4 Communiqué
B1 Ladywriter
B2 Angel Of Mercy
B3 Portobello Belle
B4 Single-Handed Sailor
B5 Follow Me Home

5.0 out of 5 stars Dire Straits best,
It was my parents who introduced me to this band, that is, I heard them all the time in the seventies, after the release of “Dire Straits”. Of course, I got into all the ‘famous’ stuff they did; Sultans of swing, then Romeo and Juliet; Telegraph Road…then brothers in arms(most of the album). BUT something was overlooked. Something Dire Straits did went almost unnoticed at the time..though I secretly always liked it. Now, I personally regard Communique as the bands greatest album and I can barely listen to the rest. Take ‘once upon a time in the west’. This song alone has enough atmosphere to extinguish most of their other work. The guitar playing on this album is measured; beautiful. Mark Knopfler does ‘let rip’ on occasion (Lady writer) but it needs no endless guitar solos to prove great guitar playing from a man who is inconceivably joined to his guitar as much as Hendrix called it ‘an extension of the body’. Knopfler has a guitar in his hands all day but I feel that with this album he showed that he can allow a damned good band to speak too. Every good drumbeat, every rhythmic strum from his long-forgotten brother, every nuance in every song is fully the effort of a band, not just one guy who can play guitar, but four blokes with instruments creating something very unique, very atmospheric. This is the only album on which Dire Straits played entirely equally as a band.
===================================================
5.0 out of 5 stars “And the stalls are just the side shows…”,
Communiqué has received some criticism for sounding too similar to the bands debut release. Personally I believe this criticism to be a little unfair. Lets face it, Dire Straits were in a lose lose situation with Communiqué. If they had pursued a different musical direction entirely they would be criticized, and if they followed the same musical path they would be criticized for sounding to much like the debut. Dire Straits chose the 2nd option, which personally I am grateful for, as part of the appeal of Communiqué is that whilst it contains musical signatures of the debut, it is a less obviously commercial album than its predecessor. Dire Straits in my view were at their best when they were releasing material that was less commercial. This isn’t because of any musical snobbery but I feel and hear that when the music was less aimed at the mainstream, the feel of the music seems more relaxed and natural to the band. Communiqué is often over looked as a 2nd rate release compared to their fantastic debut, but I think if you take this album within its own context it is possibly one of their finest moments. Tracks like News, Once Upon a time in the West, Single Handed Sailor, Portobello Belle (surely a warm up for Romeo and Juliet) and Follow me Home are superb additions to the Dire Straits back catalogue, and it is these songs which provide the necessary link between the debut self titled album and the successor Making Movies. I often find myself listening to this album more than the debut, which says a great deal about Communiqué and its long term appeal. Give this album a few listens and like me you will find yourself returning to it time and time again. Enjoy.
===================================================
5.0 out of 5 stars Amazing album!!!!!!!!!,
Why communique has received such a bad press is beyond me. I am a hardcore dire straits and mark knopfler fan and to me this album is one of his best. I think one of the reasons it was not rated highly was due to the perfect first album being its predecessor, how do you live up to the debut album of all debut albums?
As “dire straits” kicked off with some improvised guitar from knopfler so does communique in the form of “once upon a time in the west”. The track is bluesy and concerns a wild west town and some of the goings on in this town. The track is very chilled out as is the rest of the album.

News is one of my favourite dire straits songs ever and start with just knopfler and his guitar. There are quiet moments and a very emotional fast guitar solo (one of his best). The track ends with pick withers one his own just drumming away, very groovy. KNopfler in the early Dire Straits days dedicated this track to John Lennon after he was murdered.

“Where do you think you’re going” starts with acoustic guitar and builds upto a crescendo with a great solo from Mark. This song made the “money for nothing” compilation and it is easy to see why. It is reminiscent of “On Every Street” from the “On Every Street Album” in the sense it has a fast rhythmic ending.

Communique is not a great song and is about Marks journalism career. The song is actually an interesting arrangement but never really takes off. As this is the title song you’d expect it to be a classic and is perhaps one of the reasons why communique got a bad press.

Lady writer certainly does take off, one of the best Knpofler tracks of all time. It is simiar to “Sultans of swing” with a very fast solo at the end with Illsey and D.Knopfler singing lady writer, very emotional and energizing.

Angel of Mercy is a good song but has never really done much for me. Remember I am talking about these songs in comparison with other dire straits songs, compared to any other song by any other artist this is pure class.

“Portobello Belle” is the “Romeo and Juliet” of the album and is slightly similar to “wild west end” in the sound of the guitar. It is a gorgeous song and uses quite a bit of piano, a sign of things to come with Makikng Movies.

Single handed sailor is so unique. The guitar is so melodic and full of rhythm and dynamics. It is a real privilege to hear this song and is testament to the beauty of MK!

Follow me home is reflective of where the album was recorded, in the Bahamas. It is very tropical like and is beautifully written.

I think one criticism of the album is that the songs are all quite similar which I feel has some justification. Lady writer is Sultans of swing 2.

The lyrics are awesome, the guitaring very similar to the first album and put simply, it is one of the greatest albums of all time and went on to sell over 7 million world wide.

Be the first to review “Dire Straits: communique LP 1979 UK. Classic Rock. Check audio (whole album) + videos “Once Upon A Time In The West”” Cancel reply 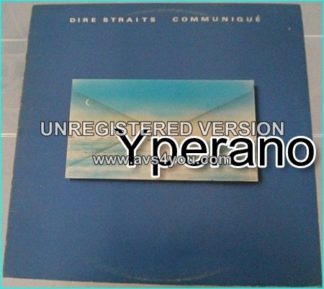