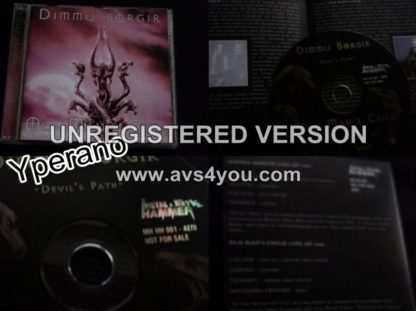 Split CD album that sees DIMMU covering twice the Celtic Frost classic Nocturnal Fear . Both bands are very good in this release. This is kind of cool – a split CD of two older and somewhat hard-to-find EPs by two of black metal’s more infamous outfits. Both offer a nice glimpse into the development of the respective bands and go a long way to explaining how they have reached their current styles. Dimmu Borgir music is typical mid-period Dimmu – fast with raw vocals and some keyboard melodies. Why they did two versions of “”Nocturnal Fear”” is anyone’s guess, as the only difference seems to be in the vocals. It’s a decent cover, but is a little too close to the original.
Old Man’s Child offer up 5 tracks that show a considerably different sound to their later albums. The songs are considerably more diverse and feature much freer arrangements than what came later. The sound is more closely tied to the classic Scandinavian black metal sound, too, with more use of acoustic instruments and folk influences. Also, the vocals are much more varied, ranging from the raw and brutal to somber, clean vocals, not unlike the first Dimmu album, For All Tid. The darkly gothic “”Og Jeg Iakttok Dodsrikets Inntog”” is particularly impressive and satisfying. Elsewhere, “”The Old Man’s Child”” is much more in line with the riff-happy, chug-fest that is the band’s current trade. It’s a nice mixture and a balance of styles that I wish they would have sustained a little longer .