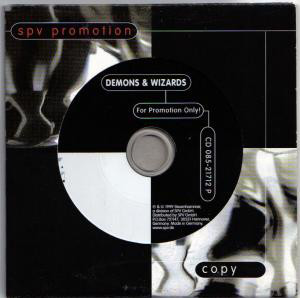 DEMONS & WIZZARDS: s/t [This is the project of the 2 leaders from the prestigious bands Iced Earth & Blind Guardian Promo copy] 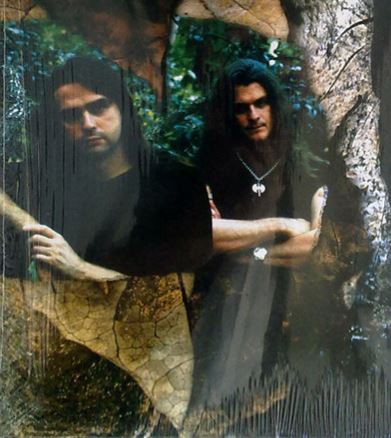 IEs music is intense, sometimes brutal that borders on the blatantly angry. BGs music is also intense, but in a more lyrically optimistic way.

On one hand, a friendship between Jon Schaffer and Hansi Kursch seems unlikely. Schaffer has never been accused of being a starry-eyed dreamer. And Hansi isn’t known for seeing the glass half empty. Yet, these two musicians bonded on their first tour together many years ago…and now regard one another almost with mystical reverence.

On this, their first collaboration, Schaffer and Kursch achieve synergy — a magical blending of styles that draws upon the foundation of both bands, yet transcends each.

Frankly, Schaffers guitar work never sounded better. And Hansis voice — an acquired taste to some — is at its melodic best.

My favorite track is “Fiddler on the Green,” a song that arose from two real-life tragedies in Hansi’s life. (In case you didn’t know, the CDs cover graphics are based on the story line of “Fiddler.”) This song has poignant lyrics, killer guitar work (both electric and acoustic) and stellar vocals from Hansi.

If you’re a fan of Iced Earth and/or Blind Guardian, Demons and Wizards is a must-have.

If you aren’t familiar with those bands, yet you like well-played metal with a lot of nice vocals — not to mention the aforementioned element of “magic” — you should give Demons and Wizards a try.

If you like what you hear, you’ll be pleased to know that Schaffer and Kursch are working on the next Demons and Wizards album — an album that will surely top my wish list for 2003.
—————————————————————-
5.0 out of 5 stars What A Rare Find ! ! !
I am 43 years old and listen to AC/DC, Black Sabbath etc. I’ve checked out lots of new bands on the internet through the years and have never found a single one worth buying, until now. I paid to download both of Demons & Wizards albums and after listening to the excellent side efforts from these two most talented musicians I had to order the actual CDs here through Amazon. I downloaded two albums each from Iced Earth and Blind Guardian and though the music was ok in my old rock opinion it is not even close to Demons & Wizards. I only hope these two guys remain friends and realize what a wide range of people they are reaching. Please give us more of this excellent music in the future.
—————————————————————-
5.0 out of 5 stars THE side project, and one of the best of 2000!
Being a huge fan of both Iced Earth and Blind Guardian, I have been very eager to get this album. Well, it is definitely a great album, but perhaps not quite as good as I thought it would be. Either way, it is quite amazing. Jon Schaffers riffing is, as always, godly, and Hansis over-the-top vocals add a melodic twist to the crunching heaviness. “Fiddler on the Green”, “Blood on my Hands”, and “Path of Glory” are my favorites. The transitions from acoustic melody to thrashy heaviness is killer. Mike Prator hits us with some incredible kick-snare drumming, the likes of which we heard on “The Dark Saga”. Oh, and I had no idea that Jon could play bass, not that hes all that great at it. Why didn’t Hansi just do it, he is a bass player! As great as this album is, theres something about it thats just…off. I don’t think Hansis voice quite matches the dark and heavy nature of the music, whereas Blind Guardian is more anthemic power metal, which suits him better than the thrashiness of Iced Earth. It just seems like hes trying to conform to the sound, and he doesn’t shine quite like he does in BG. Sometimes, it appears hes even trying to sound like Matt Barlow, and the attempt falls flat. Another thing is that the lyrics are kind of weird, and at times surprisingly violent. For instance, “Poor Mans Crusade” ends with the line “Lets kill them all”, and “Fiddler on the Green” is an eerie tale of a little girl being murdered, with the line “her body smashed, her beauty is gone”. It doesn’t feel like Blind Guardian or Iced Earth. But, maybe thats better.
It may sound like I’m putting this album down a bit, but it is really great, although I think there should have been a bit more soloing in it. It was one of the best albums to come out last year, along with Iron Maidens “Brave New World”, Nevermores “Dead Heart in a Dead World”, and Jag Panzers “Thane to the Throne”. I recommend checking out stuff from Iced Earth and Blind Guardian before you pick up this, but a fan of either band should not be without it. 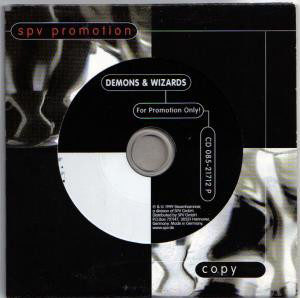