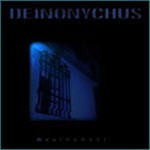 For optimal enjoyment of this album, please play with full loudness, preferably playing it at 4.00AM, while consuming a bottle of red wine, and having a bath.
This is suicidal Dark Metal. Mournument is the 5th full-length album of Deinonychus and it kind of celebrates Deinonychus 10 year career. Today, Deinonychus is a trio; founder Marco Kehren (who was also involved in the German band Bethlehem) still is the main songwriter, composer, vocalist and musician, William Sarginson (Cradle of Filth, The Blood Divine,) is on the drums and Arkdae (Dark Sanctuary) is taking the keyboards for his account. Deinonychus is truly original, mainly thanks to the unique vocals and sound. Melancholy is Deinonychus main theme trough 11 sad, dark and varied mid tempo songs. Marvelous SLOWED DOWN (!!!!!) cover of Candlemass Ancient Dreams too, which is in my eyes the best track on this CD. No back cover.

They have managed to produce a quite brilliant Gothic/Doom Metal album in the style somewhere between early KATATONIA and post-Gothic PARADISE LOST.

The singer of Deinonychus needs a hug. Having survived Bethlehems “suicide metal” period hes gone from teetering on the edge of the greatest of unknowns to merely bemoaning it.

Progress? With a title like Mournument, one expects a foray into melancholia. It opens with a rumbling wind, sparse guitar eventually segueing into the funereal keyboard progression that begins track two. Leaden drums eventually make their appearance, followed by Marco Kehrens oh, so tortured croak; it all makes sense.

So you find yourself immersed in a Skepticism-like web of glacial plodding, comforted in knowing that you can ease back, let despair wash over you for the next hour and wake up the next morning refreshed.

Three quarters the way through track two the tempo kicks up to speeds over 20 BPM. Interesting, you think, sluggish doom amped up and anxious, a bit different. Perspective changed, ready for more of the same come track three, but instead you’re greeted with a bracing slab of goth metal???

And thats how it goes, flailing back and forth in a mish-mash of goth/doom-laden despondency. It blends far, far better than you’d expect. One song you’re listening to a Lacuna Coil (musically, no female vocals here) styled workout, the next mired in doomy confines that sound like Skepticism played at 45 instead of 33. Just for kicks, throw in a heady undercurrent of Type O Negative. “Selek From Menes” wouldn’t be out of place on Type Os Bloody Kisses.

Theres just enough weirdness to keep it all glued together. “Arrival in Mesopotamia” starts with a low-fi intro that sounds like it was recorded from down the block before bursting into a muscular, up-tempo goth metal extravaganza. “A Misleading Scenario,” the most purely doom track on the CD, dwindles down to an isolated drumbeat before ending with an unexpected squall of guitar feedback. Album closer, “Ascension – the 40th Day After Easter” is the gem. Dirgey guitar underscored by double tracked vocals that sound like they were recorded at two different speeds, petering out at the end in a loop of what can only be described as calypso drums.

Schizophrenic to be sure. Lets hope Marco doesn’t get his hands on the right medication any time soon.