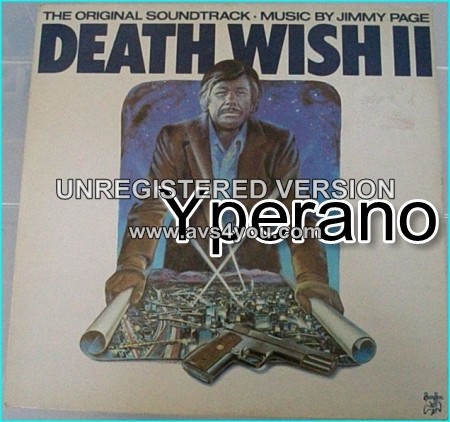 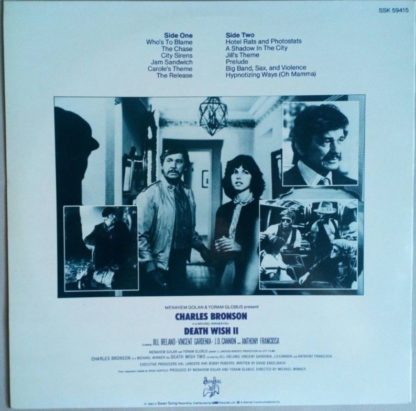 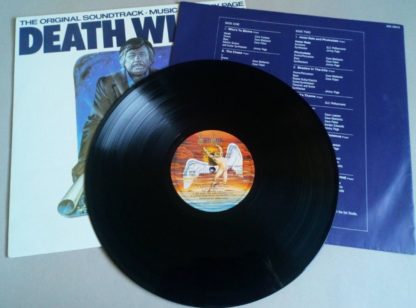 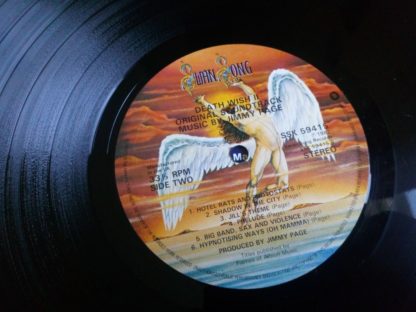 Death Wish II is a soundtrack album by Jimmy Page, released by Swan Song Records on 15 February 1982, to accompany the film Death Wish II.
Page was asked by his Berkshire neighbour, movie director Michael Winner, to record a soundtrack for the film Death Wish II in late August 1981. Page was given a deadline of a few weeks to write and record the album at his personal studio The Sol and to travel on location to Los Angeles with Winner for song writing themes. Winner later explained:
I’d lived next door to Jimmy for many years. It was a very bad time for him – the drummer (John Bonham of Led Zeppelin) had died, and he was in a very inactive period. (Led Zeppelin manager) Peter Grant and I made arrangements for Jimmy to do the Death Wish II score, for which he wasn’t actually paid, because Grant wanted to restore Jimmy back to creativity. Jimmy rang the doorbell and I thought if the wind blew he’d fall over. He saw the film, we spotted where the music was to go, and then he said to me “I’m going to my studio. I don’t want you anywhere near me, I’m going to do it all on my own”. Anyway, we gave him the film, we gave him the timings and he did it all on his own. Everything hit the button totally! I’ve never seen a more professional score in my life.
Death Wish II starred Charles Bronson, and was set around Los Angeles, which inspired Page to write a blues-flavoured soundtrack. The soundtrack features Dave Mattacks from Fairport Convention, former Pretty Things keyboards player Gordon Edwards, and veteran singer Chris Farlowe, who also later appeared on Pages 1988 solo album Outrider. Page used a Roland guitar synthesizer on a number of the tracks. Tracks from this album were later reused by Winner for Death Wish III. Page was later asked by Winner compose the soundtrack for Scream for Help (1985), but he declined and suggested John Paul Jones to the director instead.
This album is Pages only solo material to appear on Led Zeppelins record label Swan Song Records. His two later albums with The Firm were released on Atlantic and Outrider was on Geffen Records. Swan Song ceased operations in 1983. Even though the track “Prelude” is credited solely to Page himself, it is based on “Prelude No. 4 in E minor (Op. 28)” by Frédéric Chopin.

Personnel:
Jimmy Page acoustic guitars, electric guitars, guitar synthesizer, synthesizer, theremin, bass, producer
Gordon Edwards vocals, electric piano, piano
Stuart Epps engineer, mixing
Chris Farlowe Vocals
Dave Lawson piano, synthesizers
Dave Mattacks drums, percussion
David Paton bass
David Sinclair Whittaker piano
GLC Philharmonic orchestra
The Sol Symphonic strings
———————————————————————————————————-
5.0 out of 5 stars UNDERRATED PAGE SOUNDTRACK TO TYPICAL BRONSON THRILLER Two years after the demise of John Bonham (and hence, Led Zeppelin), Jimmy Page comprised this series of instrumental and vocal tracks for the sequel to Michael Winners 1974 thriller DEATH WISH, starring Charles Bronson as lethal vigilante, Paul Kersey. Page did a grand job, conjuring up those synthesizer sounds and drooping sonic effects to add menace and darkness to a brutal film, in which an ordinary man is taking the necessary steps to hunt down the thugs responsible for the deaths of his daughter and housemaid. ‘Hotel Rats and Photostats’, shadow In The City’,and the last few minutes of ‘The Chase’exemplify this, but there are some electric guitar-laden tracks to keep Zeppers happy such as ‘The Release’, the soft-rocky ‘City Sirens’, the downright dirty, pumping ‘Jam Sandwich’, the sleazily heavy ‘Big Band Sax and Violence’ and the final track ‘Hypnotising Ways (Mama)’.
———————————————————————————————————-
5.0 out of 5 stars Much better, in retrospect, than it seemed at the time, For true Page fans only. This was the first piece of music that Page put to vinyl after the demise of Led Zep. Michael Winner, who lived next door to Pages Tower House, asked him to score the film. A well thought-through and assembled collection of rock numbers, synthy ambient pieces, solo acoustic guitar mood pieces and orchestral interludes, which can be appreciated independently of the firm (for those of you like me who don’t like the Deathwish series). For die-hard page fans this LP is a must.
———————————————————————————————————-
masterpiece!!!!
a true classic! its a shame that it seems difficult to obtain as it truly is some of jimmy pages finest work.i only have this rare vinyl copy and i really hope that this will become available again as i have almost worn the groves out of the record!! maybe if all the people waiting to obtain this bombard the record label with requests, then they will organise a re-print CHARLES BRONSON RULES!!!!
———————————————————————————————————-
A most interesting page in Jimmy’s back catalogue
A year had passed since the last days of Zeppelin when Jimmy Page retreated to his own Sol Studios to record music for Death Wish II. At the end of 1981, Jimmy was still trying to come to terms to what had happened to his beloved group following the tragic end of his friend John Bonham. He had begun the year playing with Chris Squire and Alan White of Yes in an ill-fated project called XYZ – eX-Yes-Zeppelin. Also, Jimmy’s misuse of hard drugs hadn’t exactly decreased, things were not looking that bright….

So, in this fragile frame of mind, Jimmy accepted film director Michael Winners invitation to come up with music for his movie, starring Charles Bronson as a vigilante who tries to find five street punks who murdered his daughter and housekeeper on the dark streets of Los Angeles. Of course, he succeeds with a vengeance all too predictable and dated. The soundtrack though is another matter.

By using a few ideas he had since the days of Lucifer Rising and playing synthesised guitar along with his usual army of instruments, and counting with Fairport Conventions Dave Mattacks on drums and Alan Parsons Projects David Paton on bass as a core band, the music on Death Wish II speaks for itself. Mostly instrumental, only three short songs out of twelve are sung, Jimmys riffs such as on the bombastic opener Whos To Blame, The Chase and the heavy funk of Jam Sandwich are all very strong and creative, delivered with that raw intensity Jimmy knows so well – actually, that riff on The Chase is absolutely brilliant! And that symphonic middle section is of a stunning dark beauty. It would’ve been interesting to see how Zeppelin would react to it had Jimmy showed it to them before it was too late.

Chris Farlowe – who would also come to sing three songs on side B of Outrider in 1988 – provides vocals on Whos To Blame and Hypnotizing Ways, while Gordon Edwards, formerly of Pretty Things, sings and shares writing credits on City Sirens, the only song which isn’t credited to Page alone.

There are also things like Hot Rats And Photostats and Shadow In The City which are superbly moody and dark with bowed guitars, theremin and everything.

While I wouldn’t call this an undisputed masterpiece, it does generate a mood that was both fit for the film as well as Jimmy”s darker leanings. All in all, this might as well be his boldest, best work post-Zeppelin. Therefore, its a shame it has never been released on compact disc.
———————————————————————————————————-
Jimmy Page Is The Man!
I don’t think there’s ever been such a unique movie score in the annals of film. The superb mixture of Charles Bronson exacting revenge on punks in L.A. who assaulted his family, accompanied by the wild shrills, screeches, stingers, and riffs of guitar legend Jimmy Page is unprecedented. Somehow, for action movie and Bronson fans, this score has just never been topped…or tried again, for that matter. (Okay, so the GHOST OF MARS teaming of Anthrax and John Carpenter was a similar attempt, and a good one, but not quite as cool and unique as the unexpected DW II match!)

Long sought after by die-hard fans and hard to score, this soundtrack has a variety of haunting tunes that always deliver powerful emotion. Its a shame this gem is so hard to find and so expensive, but like a rare artifact sought after by Indiana Jones, its most definitely worth having if you’re into DEATH WISH II or Charles Bronson.

They don’t make movies like this one anymore, there are few leading men like Bronson any more playing these types of roles well, and there definitely aren’t music scores this unique, interesting, and challenging coming down the pike too often.

i have to say this has my fav music from him after The Zeppelin. 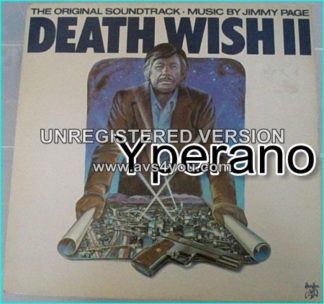