This German act features an impressive lineup consisting of ex-members of Copykill, Drift, Six Reasons to Kill, and Night in Gales playing a highly metallic form of European metalcore with a solid mix of crushing mosh rhythms and chunkier picking patterns with a few thrashier metal runs that totally kick ass. The vocals are searing yells with a good level of texture, comparable to what I personally think of as a standard of European metalcore. Most of the songs run three to four minutes and keep things tight and focused without any bullshit, and that’s a big part of what makes this a powerful record. Running time – 34:53, Tracks: 10

Hot on the heels of the recent head-caving affair from the UK’s ‘Burning Skies’ comes the debut full length from Germany’s ‘Deadsoil’. I know I’ve mentioned it before, but ‘Deadsoil’ are another high quality example of the current roster of the Lifeforce Records label. They may have lost Cataract and Heaven Shall Burn, but with the likes of Burning Skies and Deadsoil, Lifeforce’s mantle as one of the better Metalcore labels around is still well and truly intact.

Despite only forming in 2002, Deadsoil are no beginners when it comes to playing heavy music. Founding members Boris Pracht (Grr) and Christian Bass (Drr) put Deadsoil together after the demise of Copykill (Boris) and Christian parted ways with melodic death act Night In Gales; They were then joined by bassist Stefan Euterbach (formerly of Six Reasons To Kill/Gomorrha) and vocalist Friedrich Weber (ex – Drift) – the live scene beckoned and Deadsoil were quick to make an impression.

‘The Venom Divine’ is a scathing ten track, 35-minute metalcore album. Deadsoil’s style is a 60-40% split between Metal and Hardcore. It is the bands emphasis on the metallic aspect (just like Burning Skies) of their sound that makes them all the more appealing. It is certainly nothing new in terms of ideas or originality, yet again, like their label mates Burning Skies, the best thing about Deadsoil is their ability to write harsh, compact and visibly dynamic songs. As a result, there is pretty much no let up with this album – the tempo is always pushing the red line and with influences like ‘The Haunted’ and ‘Dew Scented’ the raging thrash element makes for a thoroughly convincing listen. Furthermore, the acerbic vocal attack from Weber gives this band its essential ‘anger’ factor – his style may be a bit generic (and the most hardcore thing about this band), but when the material is as gripping as this, it matters zilch.

It must be stated that although Deadsoil are not the most original, or sonically challenging metalcore band around, they do provide some variation – and it is with two tracks in particular (‘Hate’ and ‘The Absolute Never’) that I feel the band should explore a little further. Surprisingly, these tracks are the only compositions on the album that feature ‘clean’ melodic vocals. It might sound a bit ‘cliché’ to embrace this style in light of the fact that every 2nd Metalcore act is now doing it (wait till you hear the new Caliban!!), but these two tracks are proof that when it’s done well, it works a fucking treat. For me, the clean sections of these tracks come off sounding like ‘Alice Chains’ –dark and brooding, rather than anything remotely formulaic.

Backed by a punishing production (Berno Studio, Sweden), ‘The Venom Divine’ is a fabulous listen for fans of metallic, hard-edge metalcore. As stated, it doesn’t re-write the genre’s book of rules, but it most definitely gets the job done. Deadsoil have even arrived with the backing of Hatebreed’s Jamey Jasta – not a bad endorsement to have in your resume. Expect to hear more positive vibes about these guys. 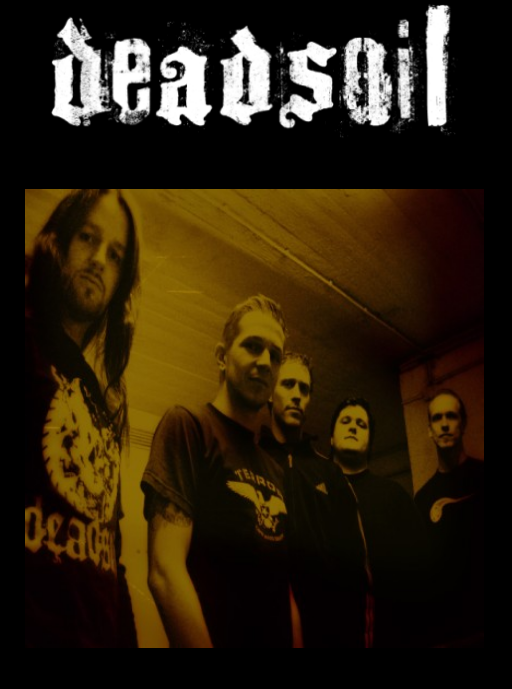