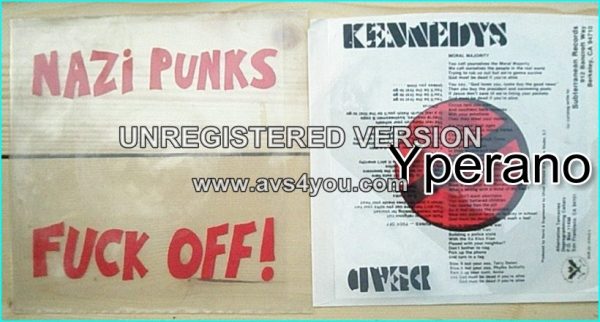 “Nazi Punks Fuck Off” was the fifth single by the Dead Kennedys. The record was released in 1981 on Alternative Tentacles with “Moral Majority” as the b-side. Both are taken from the In God We Trust, Inc. EP, although the version of the title track on the EP is a different recording from the single version.
The design crossed-out swastika has since become associated with both the Dead Kennedys and the anti-racist punk movement.
In the late 1970s, some members of the punk subculture on the West Coast of the United States began to use Nazi symbolism for shock effect, and others adopted neo-Nazism in earnest. Some listeners of the Dead Kennedys’ earlier songs “Kill the Poor” and “California Über Alles” missed the satirical intent behind those pieces and took Biafras lyrics at face value.
Despite their harsh view of fascism, the Dead Kennedys found favor among the nascent Nazi punk movement as radical right wing polemicists. As a result, their shows began to attract an unwanted audience of neo-Nazis. The Dead Kennedys used “Nazi Punks Fuck Off” to answer these audience members.

If you’ve come to fight, get outa here
You ain’t no better than the bouncers
We ain’t trying to be police
When you ape the cops it ain’t anarchy

Ten guys jump one, what a man
You fight each other, the police state wins
Stab your backs when you trash our halls
Trash a bank if you’ve got real balls

You still think swastikas look cool
The real nazis run your schools
They’re coaches, businessmen and cops
In a real fourth reich you’ll be the first to go