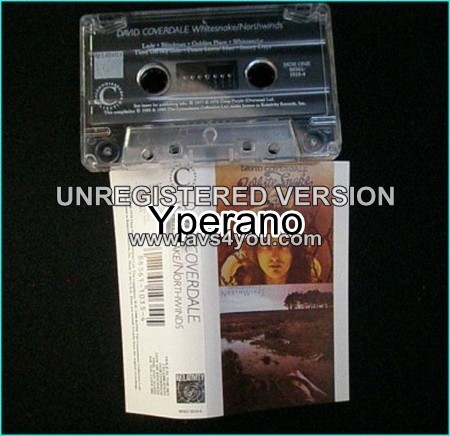 Taken together, David Coverdale‘s first two post-Deep Purple solo albums, 1977’s White Snake and 1978’s Northwinds, are rather more subdued and, while not exactly laid-back, more in a mainstream late-’70s rock groove than you might expect from a singer who fronted both Deep Purple and Whitesnake, with pit stops for roots rock, AOR ballads, and gently funky stuff.

David Coverdale decision to quit Deep Purple in the spring of 1976 allowed him to start work on his first ever solo album, “Whitesnake”. Exiled in Germany for tax reasons and unable to tour, the low-key release, recorded with the help of former Juicy Lucy guitarist Micky Moody, was the first tentative step towards what became a hugely successful career with the band who took their name from this album, Whitesnake. Taped in late 1976, with former Deep Purple bassist Roger Glover producing (and playing bass), the album was issued early in 1977.

Such were the positive vibes surrounding it that David Coverdale began work on his second solo album almost at once. “Northwinds”, recorded in 1977 (again with Glover producing) is widely regarded as one of his best. Musically and vocally strong, it reflected a growing confidence in his career outside Deep Purple (whose demise is documented on the song “”Breakdown””) and was issued just as Whitesnake were playing their first “”back to the roots”” live shows in 1978.
This tape enables fans old and new to pick both up at a reasonable price.

David Coverdale was Ian Gillan‘s replacement when Gillan left Deep Purple. Both men are very good vocalists, but Coverdale has the most soulful voice of the two. His love for Blues, Funk and Soul was the reason for the shift in style when he entered the band but it became even more evident on the first solo album he released after Purple’s first breakup. The album was titled ‘White Snake’ and that’s a small taste of things to come, because less than two years later he adopted the name Whitesnake as his own band’s name. A few members of the future Whitesnake are already present on this solo album. The guitarist Micky Moody is one of them. Another musician I should mention here, is the drummer Simon Phillips, who is probably also not a stranger to you if you’re interested in Rock history. Ex-Deep Purple bassist Roger Glover handled the production.

Although this album bears the same name as his later Hard Rock outfit only the title song resembles the stuff he would later release. That’s because it’s the most straight ahead Blues Hard Rock song present. The rest of the album is a more soulful affair. That is of course the reason why the many Whitesnake-fans never bothered to give it a listen. They should, though. It’s different but just as good as ‘Saints and Sinners’,  and a way of a lot better than the slick hair metal that finally got Coverdale mainstream success (I’m of course talking of Whitesnake’s best selling album ‘1987’* with its 2nd version of ‘Here I go again’).

I already mentioned the title track. Here are a few more:

‘Lady’, with its background singers, horns and Moody’s fluent slide guitar is an upbeat sounding Soul Rocker that’ll put you in a good mood.

‘Blindman’ is a semi-ballad that puts Coverdale’s voice to perfect use. Again Moody’s slow guitar melodies (in the second half of the song) lift the song to an even greater height.

‘Goldies Place’ is slow, funky and laid back and shows some similarities to Steely Dan material.

‘Hole in the Sky’ is a soulful ballad with a very strong chorus. If the album would’ve been a success this song could’ve become a true classic.

‘Celebration’ is a Funk & Soul party song that’ll bring you in a festive mood. It’s energizing and an invitation to shake your lazy fat ass.

‘White Snake’ is a consistent album in the sense that the Soul aspect is always present and that the song writing is good throughout. At the same time it’s varied, with introspective and slow songs on the one side and more upbeat sounding stuff and a few (relatively mild) Rockers on the other. All in all it’s a good album and more entertaining than Coverdale’s second solo album ‘Northwinds’.

But after ‘Northwinds’ the band Whitesnake would come into existence and that would be the start of a whole new and more successful chapter in Coverdale’s history. If you want to get to know the band at its best, forget everything they released in the second half of the eighties, unless you’re into Hair Metal. Many rock critics and other invertebrae will be whispering at you from the undergrowth that ‘1987’ is their best album. It’s not. It’s just their most commercial. If it’s simply quality you’re after, and also if you’re into Classic Rock and Blues based Hard Rock, listen to this tape that still stands as their finest release ever.