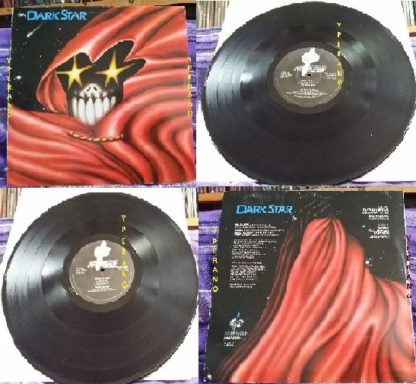 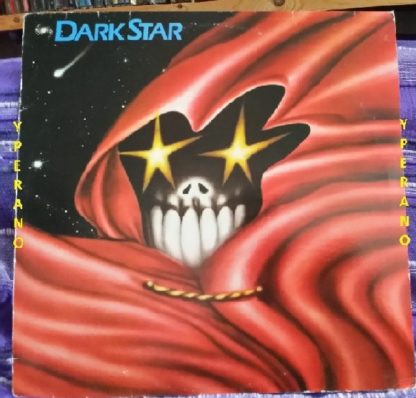 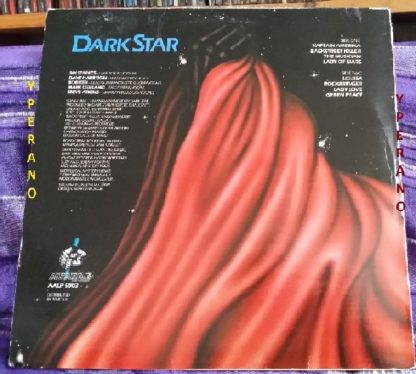 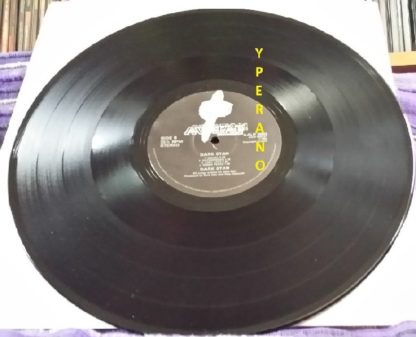 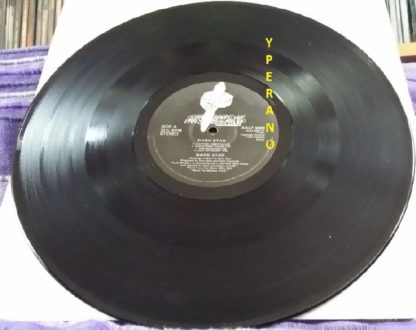 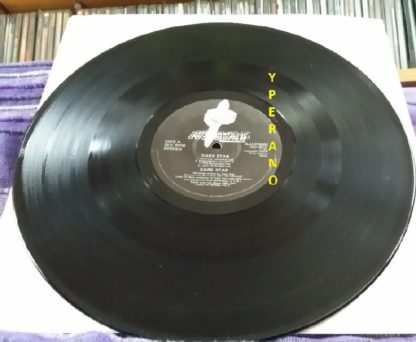 B1 Louisa
B2 Rockbringer
B3 Lady Love
B4 Green Peace

Consisting of vocalist/keyboardist Rik Staines (aka Harrison), guitarists Dave Harrison and Bob Key, bassist Chris Causton, and drummer Steve Atkins. One of countless bands associated with (and perhaps ultimately damned by) the New Wave of British Heavy Metal movement, the obscure Dark Star are perhaps best remembered for their memorable participation in the now legendary Metal for Muthas, Vol. 2 compilation in 1980. The excellent “Lady of Mars,”that was submitted for consideration to EMI, which promptly requested it for the second Metal for Muthas disc.  The very melodic, Thin Lizzy-inspired contribution became a highlight of that influential compilation, the band quickly set about recording a few more tracks for a proposed independent EP. Unfortunately, Dark Star’s “trusted” business partner for this project suddenly pulled a fast one and vanished with all of their cash, leaving only a handful of copies of the single, which was thereby instantly rendered mega-rare status in decades to come. This was hardly any consolation for the group, which nevertheless rebounded by signing with Avatar Records and seeing a proper release of the “Lady of Mars” single by late 1980. A short U.K. tour with fellow NWOBHM hopefuls White Spirit and Angel Witch followed and, after welcoming new bassist Mark Oseland, Dark Star proceeded to record their eponymous debut album in 1981. Now highly regarded as a minor classic, the LP drew positive comparisons to Def Leppard and Diamond Head and led to more touring in the U.K. and continental Europe, but wound up lost in the shuffle when Avatar was forced into bankruptcy a year later. The members of Dark Star had had their fill of failure by then anyway, and decided to go their separate ways — only to unexpectedly resurface under a very commercial AOR guise for 1987’s Real to Reel album (available for sale here on LP, so search it out).

THIS MIDLANDS band, originally called Berlin, were years ahead of their time.
Dark Star were led by the strange, charismatic and hairy Rick Staines, who had a penchant for leather trousers and kimonos. His band appeared on the classic first ‘Metal For Muthas’ volume 2 released by EMI with their best cut, ‘Lady Of Mars’.
The song was to appear again on their cult début album ‘Dark Star’ put out through Avatar in 1981.
‘Dark Star’ was full of weird and wonderful, slightly spacey, British Metal that came across as refreshingly
original for the period, when so many were content to plagiarize old Sabbath and Judas Priest riffs.
Amazingly enough, a slightly revamped, more mature version of Dark Star reappeared after a five year absence
in 1987 on the FM/Revolver label with a new album called ‘Real To Reel’ but by then the band had moved into a totally new direction.

———————————————————-
Formed in Birmingham, England, in 1978, by ex-Sweaty Betty vocalist / keyboard player Rik Staines and ex-Suicide guitarists, Dark Star are best known for their single ‘Lady Of Mars’ which was included on the legendary NWOBHM compilation ‘Metal For Muthas Volume 2’, and was a firm favourite in rock clubs at the time.

They released their début self titled album in 1981, which gave us classic NWOBHM tracks like ‘Kaptain Amerika’, ‘Backstreet Killer’ and ‘Green Peace’.

Over the years Dark Star toured with bands such as Budgie, Magnum and Ten Years After, also embarking on the ‘Metallical Mystery Tour’ with labelmates Limelight and Chevy.

In 1985 Dark Star sadly called it a day, with a further studio album ‘Real To Real’ emerging on FM Revolver in 1987.

The NWOBHM scenes foundation was built on singles. There were tons of singles released during the NWOBHM. (Most bands could only afford to finance singles.) Full-length albums were the exception, not the rule. I mention this because Dark Star delivered one of the more highly regarded singles of the NWOBHM with Lady Of Mars (1980). This song was also one of the highlights of the Metal For Muthas Volume II compilation (1980, Sanctuary Records). Lady of Mars appeared on Dark Stars self-titled debut (Avatar Records). And believe me, the Dark Star album shows that Dark Star were not one-hit-wonders. Lady Of Mars is just one of the standout tracks of this very solid album. Dark Star is a well-rounded offering. Check out the Thin Lizzy swagger of Lady Love, the somber beauty of Green Peace, the almost Cat Stevens-esque The Musician, and, of course, the exceptional rocker Lady Of Mars. Actually, all eight tacks on Dark Star are worthwhile. No stinkers here!

I’ll Take You Away To The Stars
It is Lady of Mars for which Dark Star are best remembered, and it is a real piece de resistance. I like it, I like it a lot and so will you. It was the mainstay of their début album (self-titled), a single (1980) and on the Metal for Muthas (volume 2).
The lyrics mysterious though they maybe allude to an escape to the Kosmos, they are not running away to Gretna these days eloping has gone inter-galactic folks. Hold tight the starships are leaving.
It is a fine example of the breadth of NWOBHM nourishing goodness. There is a bit of switch halfway through the song that manifests itself as a 60s style medley worrying reminiscent of Spinal Tap Sings “(Listen to The) Flower People” and Other Favourites. I do enjoy a good singsong don’t you?

5.0 out of 5 stars
Excellent melodic vocals, crunchy guitars with just enough keyboard flavoring to put this classic at the top of my list. This period of metal was brief, but it restored credibility to rock n roll. For those who want to hear a band play music they actually created(not something a producer or add executive thinks will sell), get this LP.

Dark Star…another number in the catalogue of forgotten NWOBHM rangers, deservedly in the semi-cult category (if only among NWOBHM enthusiasts). They fought their way through a couple of 45s to win a tactical victory in form of a slot on Metal for Muthas compilation. That went for Lady of Mars, a spatial, atmospheric cross-breed of a ballad and a stomping anthem blown full of naivety and simplicity, still catchy, adept, and strangely touching.

It requires emphasis here that Metal for Muthas wasn’t that spectacular, especially from a current point of view. Lady of Mars formed a mid-record apex of the compilation and a strong reason for anyone into traditional heavy metal to check ’em out.

But before withering away completely and sharing the fate of so many second and third line NWOBHM bands Dark Star landed themselves a full LP on Avatar Records. It was to be their only serious effort to land a place in the sun, which would ultimate fail.

Discounting Lady of Mars, this should tickle a fancy of those into heavier moments of Thin Lizzy (on Jailbreak and Chinatown) and UFO and it is possible to feel for some Blue Öyster Cultish weirdness too, if only for a teaser. Dark Star lends a lot in sound and even appearance to 70s hard rockers and give an impression to have one leg in the past-gone decade and other striving for opening the 80s.

Checking out the songs, you’ll find it is good solid stuff, with not much surprises. Kaptain Amerika is a opener echoing apparently how shit the Cold War was. Continuing into Backstreet Killer, a lengthy mid-pace rocker with a nice stomping riff and a head-nodding chorus, and struggling with The Musician before reaching their single spot-on with Lady of Mars we have A side wrapped up conveniently.

Good, standard, no-frills NWOBHM, Dark Star shows the more laid-back, mid-paced and calmer side of British heavy metal at the time. Damn hard to find, apparently it hasn’t been reissued on CD.

5.0 out of 5 stars NWOBHM master work
Another magnificent band to originate from the ultimate epicentre from which U.K. heavy metal bands have traditionally been born and bred, Birminghams Dark Star formed in 1978, toured with Budgie in 1979 and released the famous “Lady of Mars” single the following year, and the song was also included on the second instalment of the noted “Metal for Muthas” compilation. Thus they were at the peak of their powers and creativity in January and February of 1981, when they recorded this; their one and only self-titled full-length proper for Avatar Records.

Wow! Its rare that you find an album that is so captivating and classy from beginning to end but here it is, this is just what “Dark Star” is. The band combines the pomp and grandeur of ’70s rock with the new-found rawness and aggression that was characteristic of NWOBHM music of this time period, and this LP was recorded during the movements absolute peak. Opener “Kaptain Amerika” pummels with guitarist Dave Harrisons 50-megaton heavy rock riff and vocalist Rik Staines’ raw reverbed delivery. Following that is “Backstreet Killer,” which is a feel good ’70s-stye rocker with molten riffage where you could potentially burn a joint during its 7-minute+ runtime and bask in its euphoria. Closing out side one of the LP is of course “Lady of Mars”. The bands ultimate masterpiece, is “Lady Love.” Man oh man is this a classic song! The vocal harmonies are as beautiful as any song by the Beatles, but it is definitely NWOBHM of the highest order, with a nice early Tygers of Pan Tang vibe going on. Once you listen to it, its chorus will not leave your head for days. This album was rightfully a success that eventually went on to garner classic status and earned the band a tour that same year with the likes of Magnum, Chevy and Limelight.
One thing is certain though, if you are at all an enthusiast of the NWOBHM or just great rare early ’80s U.K. hard rock in general, you absolutely must get this LP. A master work that continues to endure with each passing year. 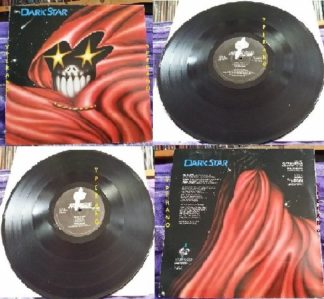