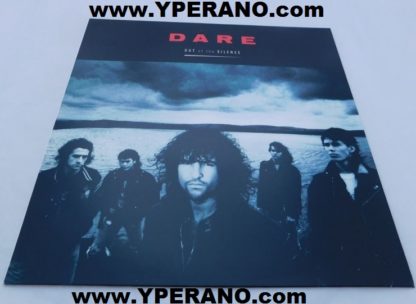 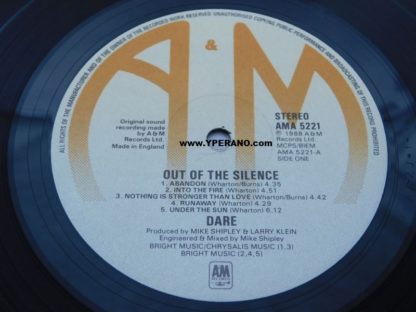 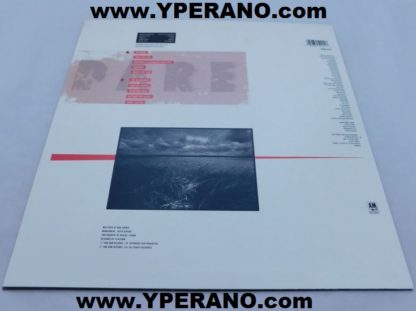 a video of the actual LP for sale: 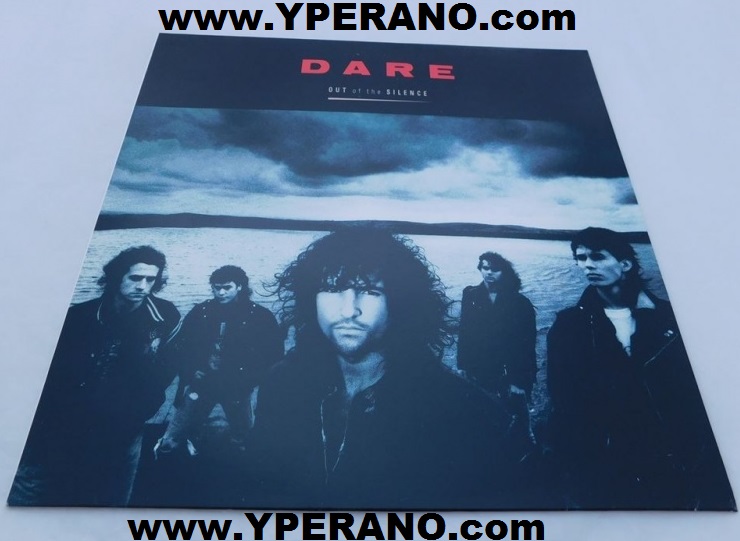 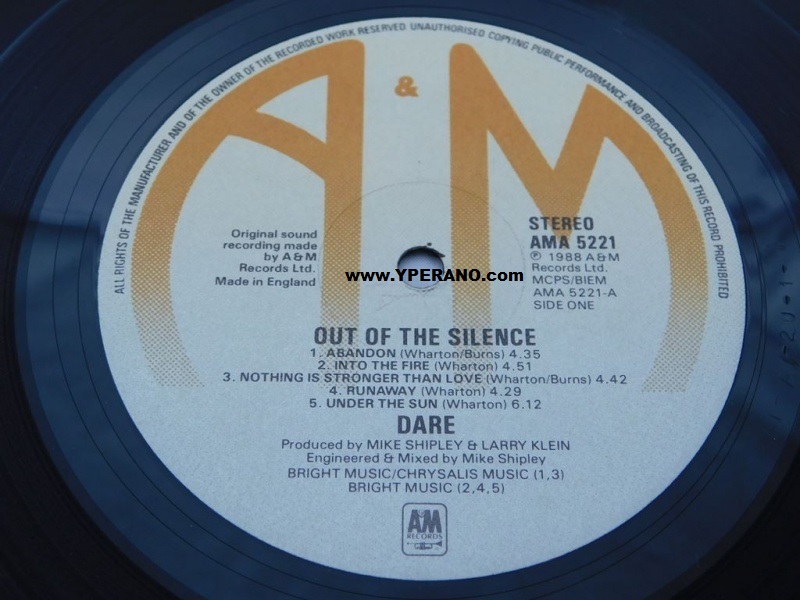 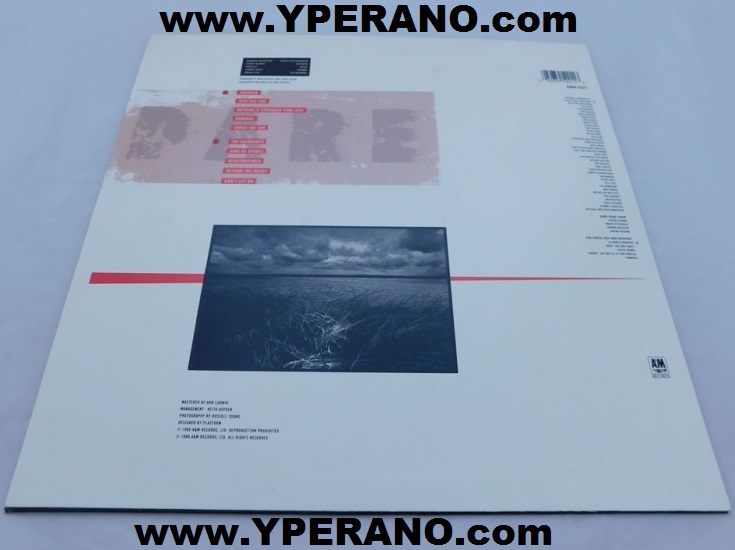 Dare was formed in 1985 by former Thin Lizzy keyboard player Darren Wharton after Phil Lynott had dissolved the band. By 1987, Dare had gained a local following in Oldham and in 1987 were signed with a four-year deal by A&M. The band’s debut album, Out of the Silence, was released in 1988 on A&M Records.

5.0 out of 5 stars purely exceptional
Some albums just touch you, you know the feeling, the first track reveals its first few chords and well your hooked. This album got me ten or more years ago, and even today tracks like Under the Sun and Don’t let Go remind me of those things I wish I could forget, but this album and the need to play and play won’t let you. If you like your rock smooth, mellow, honest, based on melody and not just the thrash and clash of drums and guitar BUY THIS. Raindance is a highlight and should have made the top ten. King of Spades, Abandon- all the tracks are fantastic. I know I love it for sentimental reasons, but the plan fact is it is just brilliant, please buy it these Oldham boys deserve to still sell
————————————————————
5.0 out of 5 stars Superb Debut Album,
This Album is a soft Melodic Rock Classic with a great bland of keyboards guitar harmonies and catchy Riffs. Still sound sounds good today and delivers what so many bands have tried to do and failed. Like FM (Chris Overland etc) Dare seem to be another one of the those bands that did what matters right (Great Albums and Live performances) but sadly never made it to the best of their potential-Shame. Very under-rated Band.
—————————————————–
5.0 out of 5 stars BRILLIANT
This is one of the all time classics.One of the best albums to come from the 80s.To all those people who have never listened to this album it is A MUST. Sung with true feeling and the unmistakable voice of the one and only DARREN WHARTON (Thin Lizzy).His tribute to Phill Lynott has to be heard to be believed in the Hauntingly beautiful King of Spades.This is a MUST HAVE ALBUM for ALL
——————————————————-
5.0 out of 5 stars Brilliant,
One of the best AOR albums you will ever hear. Darren Wharton is one of the best songwriters around. Produced by Mike Shipley and Larry Klein. Giant, mike spiro , mutt lange music buy this. 10/10
——————————————————
5.0 out of 5 stars Out of the Silence……………….Dare.,
This is THE seminal album from Dare, I bought it twenty years ago and I’m still playing it, not a ‘bum’ track on it. Rock doesn’t get much better than this. My personal favourite is “King of Spades” but they’re all terrific. If you’re thinking of buying it, don’t hesitate. Nobody makes ’em as good as this anymore !.
——————————————————-
5.0 out of 5 stars 5 Star Darren,
Where to start other than to say that this is one of those classic AOR albums that sinks its hooks and melodies straight into you from the first play. The musicianship is superb, the songs well crafted and structured, the melodies and hooks are so memorable, it deserves to be in the all time top 10 of AOR albums along with the likes of Touch, Balance, Signal, Talk of the Town etc
Dare have moved on to a more Celtic ethereal sound nowadays, good for some, not for others. Putting that to one side as one should do, this is without doubt an outstanding piece of AOR history and craftsmanship from a band at the absolute peak of their desire and writing skills.
This is a must for your collection!! Don’t let the band miss out by copying it, buy an original and show respect to an album and band that deserve to still be talked about in many years to come!!
———————————————————–
5.0 out of 5 stars Superb melodic rock!,
I have discovered Dare recently and I have to stay that they have an outstanding inspiration for writing wonderful melodies. It`s easy listening, but it`s not cliche at all. This is a great debut album and the songwriting is wonderful. Must have.
———————————————————-
5.0 out of 5 stars Shattering the silence.,
Some bands stand the test of time, Dare are one of those bands. You wouldn’t think they formed in Oldham,Manchester as their sound is so strong and being AOR reminiscent of so many US bands. Singer Darren Wharton’s silky smooth vocals stand out a mile,emotional and powerful in equal measure. “Heartbreaker” being Bon Jovi-esque rock whilst “Under The Sun” tugs the heart strings and takes you on a journey of broken hearts and broken promises.
I really cannot find fault with this album, the musicianship is solid and not over the top. Having seen the band live in early ’90s around North UK, playing to bigger crowds each time; its a shame they never cracked the big time. A follow up album -maybe mistakenly- went for a more heavy rock sound losing the gentle soul stirring songs that made this debut such a gem and so went their fanbase.
Bands like this just don’t come out of UK anymore,if you can find the album buy it, every song will remind you of a special time in your life.
————————————————————-
5.0 out of 5 stars A blast from the past…,
One of my very favourite albums. This album is hard to find because it has been discontinued. 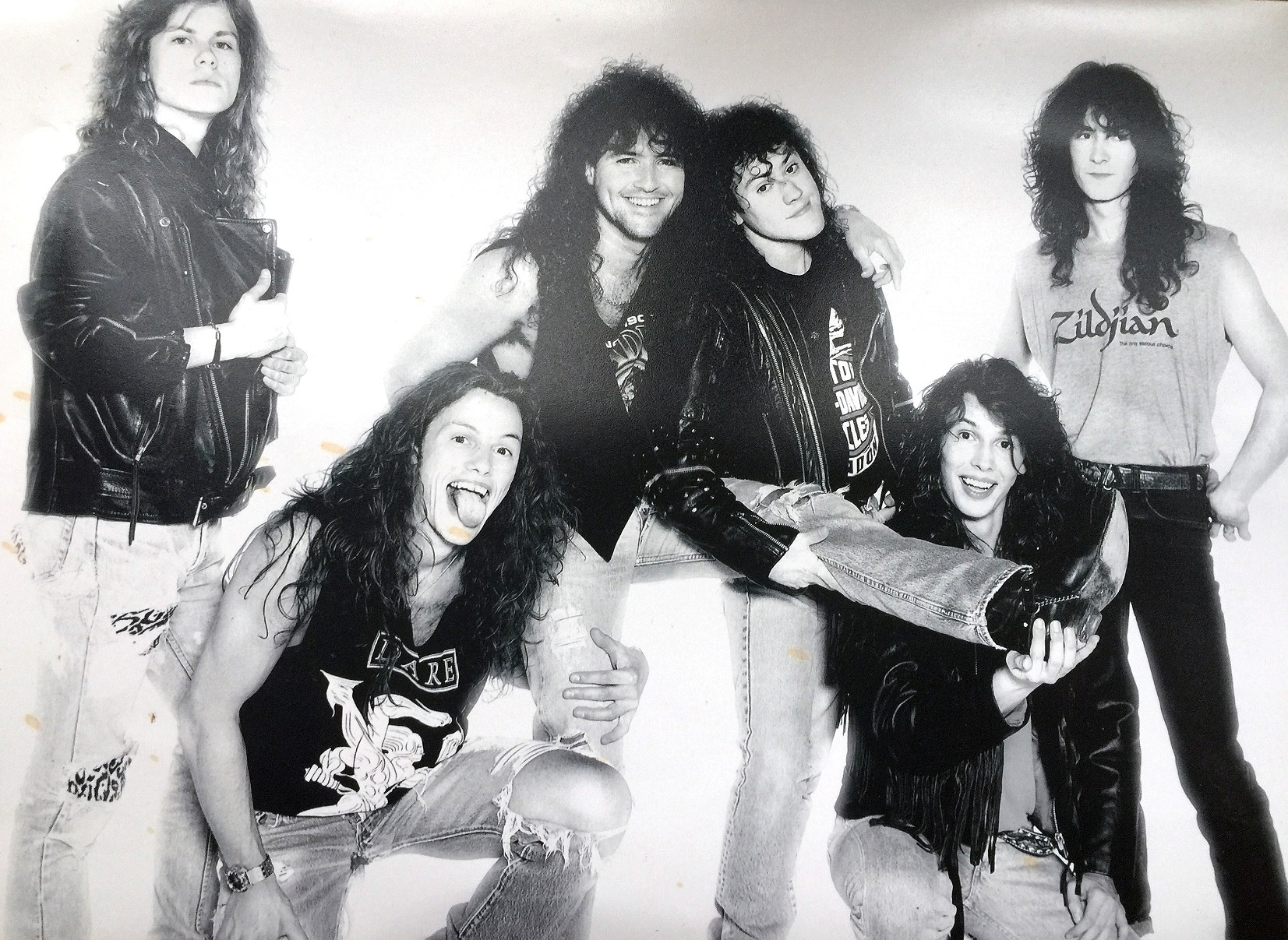 Be the first to review “DARE: Out of the Silence LP with inner 1988. UK ama 5221. Darren Wharton (Thin Lizzy keyboardist). Check videos “Abandon”, “The Raindance” + audio (whole album) + a video of the actual LP for sale..” Cancel reply 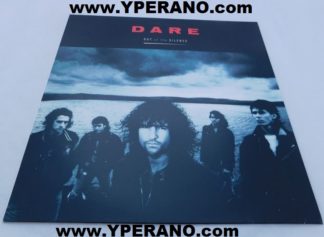