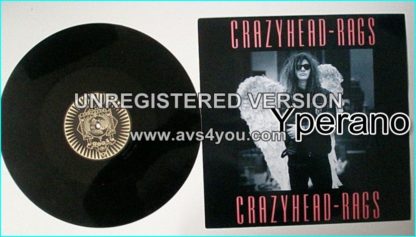 RAW Magazine review No.3:
This is more like it. Especially like the brass section. Yeah more polemical stuff from those long haired greasy biker type hippies. Nice quotes on the back of the cover. Nice well-I-Give-a-F**k vocals, nice loose production and the dumbest drumming outside of the Ramones. Music for the working man, or, and perhaps more to the point, music for the unemployed man (or woman). Like punk really DID happen.

Tracklist
A1 Rags
B1 Rub The Buddah
B2 Screaming Apple

A storming single from a band who were the one-time pretenders to the Grebo crown and boasted members with names like Porkbeast (bass), Fast Green Dick (guitar) and Vom (what do you think: drums, of course). Unavailable on CD.

Crazyhead are an English garage punk band from Leicester, England. Though lumped in with the largely media-created Grebo scene, they were more influenced by the Garage Rock of the late ’60s, as well as bands like The Ramones, The Stooges and Captain Beefheart. They described themselves as an “urban bastard blues band”, and their songs ranged in theme from trenchant social commentary to the surreal, but always with an underlying vein of black humour.

Formed in 1986, they signed to independent label Food later that year and their début single “What Gives You The Idea That You’re So Amazing, Baby?” reached number 2 in the UK Indie Chart in March 1983. For the rest of the year they toured extensively, supporting The Cult, then Julian Cope, and also played the Glastonbury Festival. Their second single “Baby Turpentine” reached number 4 in the Indie Chart.
In mid-1988 their third single “Time Has Taken Its Toll On You” reached #65 in the Top 100, their label now owned by EMI. The band embarked on another UK tour to promote their début album Desert Orchid, released in October 1988, along with another single, “Rags”, and then toured Europe supporting Iggy Pop. 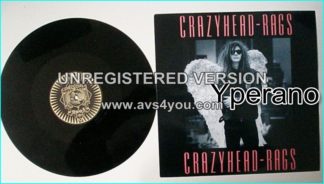