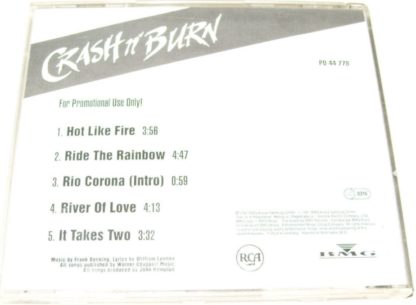 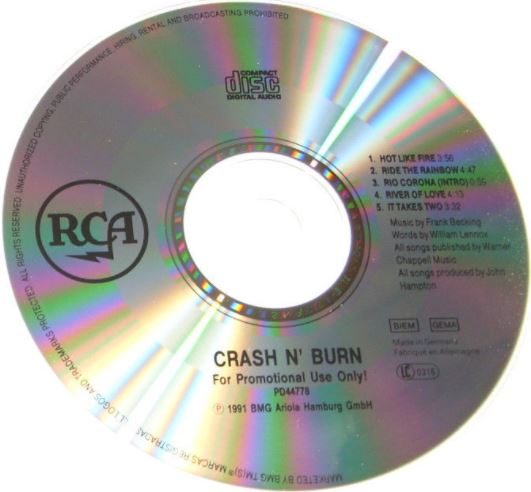 British born vocalist William Lennox and guitarist Frank Beckings chose to regroup, with Irish bass player Gareth Thomas (ex-PADDY GOES TO HOLLYHEAD and DOCTOR AND THE MEDICS) and drummer Ingo Plaz joining a revised line-up. Plaz decided to leave later in the year, so ex-NENA drummer Rolf Brendel was drafted and the band changed names to CRASH N’ BURN, with BMG taking up their option on the band for Europe and Britain. This release here, turned out to be a collection of catchy songs and, prior to its release, the band toured Britain as support to FM, followed by a guest slot on the SCREAMING JETS tour.

Love this one – pretty solid release – sounds a bit like The Cult at times
————————————————————
This one is amazing. Hard to compare to anyone else, the singer sounds slightly like Davy Vain, but the music is much more melodic than Vain. Anyway, get it for yourself. You won’t regret it. Absolutely no fillers!
————————————————————
i agree ! hard 2 compare indeed. catchy rock music. killer opener with Hot Like Fire.
———————————————————–
Disagree with the Vain comparison. Sounds more like Jailhouse meets The Alarm. Like Foolhouse and Glorious Bankrobbers in ways. I can kind of see The Cult comparison. Anyways, this sounds like a new genre- Southern Glam. Good stuff.
———————————————————–
a very cool CD..all the songs are very catchy..my faves are ‘hot like fire’, ‘ride the rainbow’, ‘river of love’, and ‘it takes two to rock’….They rocked like a younger version of the cult… get this cd if you can. I hear this band as a Southern Sleeze Beez.