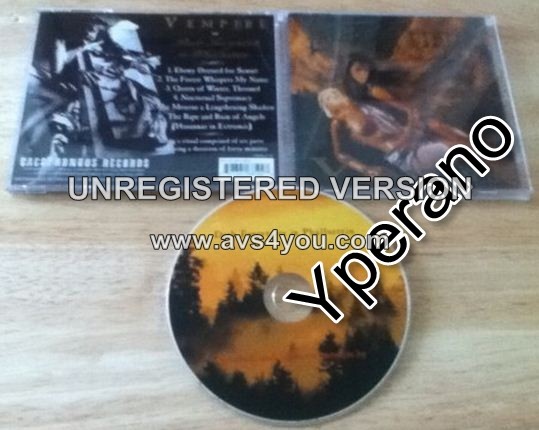 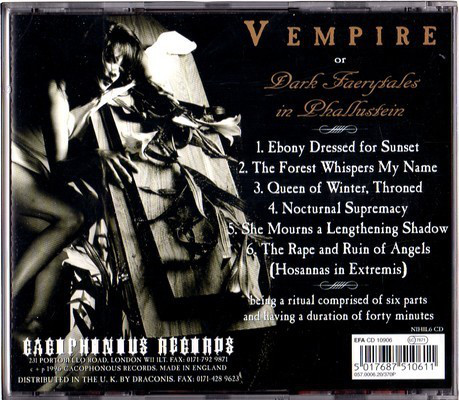 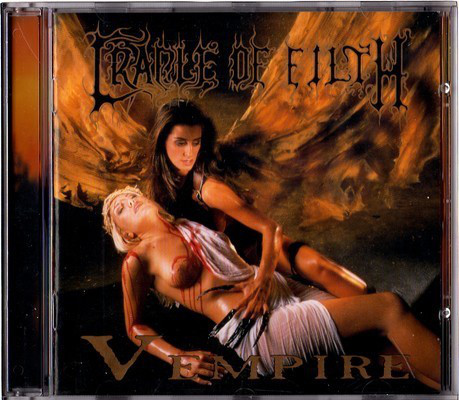 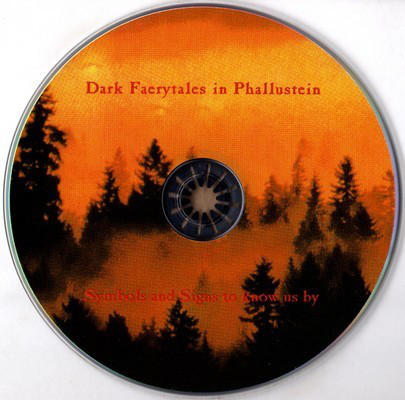 ========================================================
A Magnum Opus… – 100%
This is, in my humble opinion, Cradle of Filth’s finest moment to date. With this they proved how good they once were.
COF certainly set the bar for their genre with this interim release. It is unfortunate they were never able to reach these heights again, as every subsequent release failed to match or better V Empire.
This is an epic album! Its entire duration feels like a dramatic build-up, with each highlight reached feeling darker and more emotional than the one preceding it. Every track, including the instrumentals, is essential, each subtle nuance resonating long after it has ended. The mood on this album is much darker than anything Cradle released after it.
On V Empire, COF achieved the perfect balance between the raw production and overall feel of The Principle Of Evil and the over-produced, polished sound of later albums like Damnation And A Day. Though it is questionable whether or not the music is deserving of its black metal label, V Empire definitely belongs in the collection of any extreme metal fan.
Many, even Cradle Of Filth themselves, have tried to emulate this milestone of melodic black metal and failed. It is a memorable album where every track is fully progressed with highs and lows developed beautifully, with the exception of Ebony Dressed For Sunset, which is more of an interlude. For me, the definite highlight is The Rape And Ruin, starting as brutally intense black metal and rising paradoxically into intricate symphonic melodies, the standout crescendo of an already stellar tracklist.
One crucial element of Cradle of Filths creations that is always overlooked, is the eloquence of Danis lyrics. Parting dramatically from the tried and tested content of blasphemy and evil, instead it weaves a poetic tapestry of darkness, vampirism and the darkly erotic. The words add excellently to the overall effect and atmosphere of the songs.
Although the mid-length songs, namely The Forest Whispers and Nocturnal Supremacy, stand alone excellently, I feel the album is best experienced in its entirety, with each song flowing into the next seamlessly. It is certainly a passionate effort from one of the finest extreme metal acts of the 1990s.
Since discovering this album I have searched in vain to find more to stand among its ranks. It will always stand out to me as COFs greatest release, an inspirational album no matter what genre you place it in.

The band? Cradle Of Filth. The album? Well, I’m going to cheat and mention two: ‘Vempire’ (or ‘Dark Faerytales In Phallustein’) and its successor ‘Dusk…And Her Embrace’.

I don’t know why a 14 year-old decided to buy ‘Vempire’ out of the blue like he did. Maybe it was the naked women on the front cover? More likely it was because of the overt ‘parental guidance’ sticker that it had plastered on the front cover. Ever one to push boundaries, he probably looked at the sticker and the imagery and thought in his wicked way that this was the perfect album to buy. Whatever the reasoning, he bought it and the rest is history.

When I heard the album for the first time, I recoiled in horror. I can laugh about it now but at the time, I was still someone who was still feeling his way into the metal world. As such, I loved many of the usual suspects like Guns ‘N’ Roses, mid-era Metallica, Def Leppard and Iron Maiden. However, Cradle Of Filth was an entirely different proposition. It seemed like the most extreme music on the planet and I wasn’t sure I liked it.

Incessant lightning fast double-pedal drumming, frenetic evil-sounding riffs, sinister atmospherics from abundant keyboards and those high-pitched screamed vocals…this was the stuff of nightmares. And whilst I wasn’t sure that I liked it, I felt compelled to listen. I was drawn in and became fascinated with the sounds that Cradle Of Filth created.

Finding out that the band was local to me only increased the fascination. I was amazed that such a band could reside in such a sleepy place in Suffolk so far away from the bright lights of any of the big cities. And yet here they were. As it transpires, band mastermind and lead vocalist Dani Filth now lives only about 500 metres from where I grew up in my family home and where my parents still live. This is possibly as spooky as some of the band’s music.

The early key to my love of this record was, ironically, the instrumental track ‘She Mourns A Lengthening Shadow’. It was a very melodic piece of keyboard and synth driven classical-sounding music. If a band could write something so beautiful, I reasoned that the rest of the music couldn’t be that bad. As it turns out I was right because littered within the relentless machine-gun rhythms, staccato riffs and high-pitched screams, there is an awful lot of melody to be heard. Not only did the music contain great melodies but a surprising amount of groove and head-bang worthy material as well.

Take the mid-section of ‘The Rape And Ruin Of Angels’ as a prime example of the melodic sensibilities of Cradle of Filth. The track quietens and is dominated by a lovely bass rumble before the keys and guitars kick in with devastating effect. It is akin to an oasis of beauty within the desert of extremity and the huge juxtaposition works brilliantly, creating drama and the necessary hooks to keep the listener returning time and again.

To this day however, ‘Queen Of Winter, Throned’ remains the stand-out track on this mini-album from 1996. At over ten minutes, the track has a genuinely epic feel and it darts from one segment to the next throughout its significant length. As the track advances, it also builds. The tension increases and so does the speed until you’re hit with one hell of a crescendo. It is actually very melodic and groovy, dominated by a mid-tempo riff, flamboyant drumming and layers of synths that take the atmospherics to a whole new level.

This was, as it later transpired, the track that inspired my brother to take up drumming and to later play in several local metal bands. He explained to me that it was the way in which Nick Barker was able to keep up the relentless pace and precision for so long and to up his game in the final moments of the song that captured his imagination and his utmost respect.

Years later, it was fitting that Mr Barker was to visit my brother in the hospice in the days before he passed away, helping him to set up his electronic drum kit and encouraging him to play a few beats. To be honest, this act of kindness had even more of an impact on us all than the album itself back in the day.

For all these reasons, ‘Vempire’ or ‘Dark Faerytales In Phallustein’ is a very special album in my collection and will forever remain so.

At the beginning of this article, I mentioned two Cradle Of Filth albums. In the next instalment of this series, I’ll take a look at the magnificent ‘Dusk…And Her Embrace’ 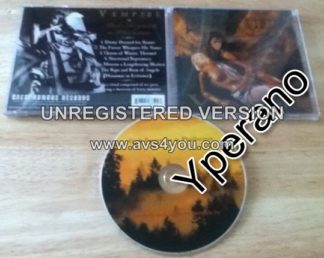