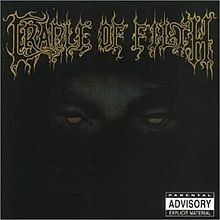 From the Cradle to Enslave is an EP by Cradle of Filth. It contains two original tracks; the title track and “Of Dark Blood and Fucking”. The rest of the disc consists of two cover versions and a re-recording of a track from the album Dusk… and Her Embrace. The album was recorded during a period of upheaval for the band, with Gian Pyres and Nicholas Barker leaving prior to its release (Pyres would return for the recording of Midian) and Stuart Anstis and Les Smith departing the band soon afterwards.
From the Cradle to Enslave was the first of Cradle of Filths songs to have an accompanying video. The video was directed by Alex Chandon, who also made the film Cradle of Fear, starring Dani Filth. It featured explicit images of nudity and gore and was released in two versions, edited and unedited.
Dani Filth revealed his antipathy towards the title track in Kerrang! issue 1130: “We have to play it at every gig… I’d like to erase it, so I wouldn’t have to play it again. After a while you just want to play something different. Theres something about the hook that just strikes a chord of fear down my spine.”