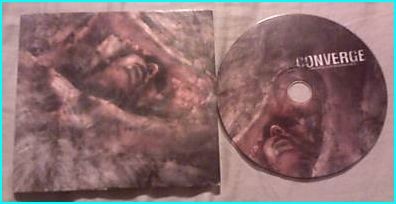 5.0 out of 5 stars converge are truly a magnificent band,
what can i say? this album isn’t really for the people who aren’t into the hardcore metal genre, but those who are.. this is a must have. the album cuts a little short, song duration wise, but the brilliance is condensed into more concentrated songs. BUY IT!

5.0 out of 5 stars A Great CD, bottom line
Jacob Bannon is one of my favorite vocalists today. He writes some of the best lyrics I’ve ever heard or read. Most of the songs are spectacular, and it’s hard for me to pick the highlights of this CD. So if you’re a fan of Converge, this is a definite must-have in your collection. If you’ve just heard of them but not owned any of the CDs, this would be a great starting point. But if you don’t like them, well whatever, your choice.

5.0 out of 5 stars Please explain something to me………
I bought this CD the other day, it was the last Converge I still needed. I wasn’t expecting it to be fantastic, since the tracks are obviously just demos and unreleased tracks.

Now I AM CONFUSED. The demo tracks are on this CD are MUCH better than their counterparts on When Forever Comes Crashing! The demos sound much more crunchy and aggressive… I’ve always thought WFCC suffered from low-quality recording and here’s the proof.. the demos are BETTER. Great songs, great riffs.

Finally. The first 7 tracks. These range from decent to awesome with one MAJOR standout.

This album is a MUST for Converge fans.

5.0 out of 5 stars In the dark of our longest nights, we fall apart. Waiting for our end before it begins, we fall apart.
Converge, what can be said that hasn’t already? Such an incredible band that even an album full of b-sides and demo versions is better than most of what is being released out there today. Even though line-up changes have plagued converge,Jacob Bannon has always kept it together and kept the band strong. His lyrics are so passionate and heart felt, that many of his songs have brought tears to me eyes (i.e The Saddest Day, Flowers and Razorwire,) Being that about half of the songs here are demo versions of songs from “”When Forever Comes Crashing”” some who have that album, may be worried they waste their money and not get enough bang for their buck. Worry not though. Not only are the new songs more than worthy but it just can complete any Converge fanatics collection. So be it casual or obsessive fan, I recommend this.

Downpour – 4.5/5 An opening song you should expect, heavy and relentless. The converge trademark. It only sets up for what is to come.

Flowers and Razorwire – 100/5 One of my favorite song ever. The first minute is a ballad type, before becoming pure and brutal. I’d buy this cd simply for this one. Lyrics that tug at your heart and music that makes you thrash like tomorrow is never coming.

Tremor – 5/5 The “”You Fail Me”” album had “”Hope Street”” and “”Unloved and Weeded Out”” has “”Tremor”” a short song, which keeps you headbanging through the whole thing. “”In the dark of our longest nights, we fall apart. Waiting for our end before it begins, we fall apart.””

Home Song – 4.5/5 The drumming in the intro here(which compliments the bass nicely), just made me want to pace around and start throwing punches, then the breakdown kicks in…slowly followed by Jacobs vocals and all bets are off. A mosh pit anthem

For You – 5/5 Could be called “”Home Song pt 2″” cause like the song mentioned before, this is a pit anthem. It starts out with some scratchy guitar work, before rapid drums hitting in every direction starts. Another song that if it doesn’t leave you dead, will definetly leave you headbanging.

Jacob’s Ladder – 5/5 A sad song, with frantic music. The lyrics to me portray longing but then a hatred for this longing. Mourning perhaps.

Undo. – 6/5 Another amazing song, with a great intro riff. One of the best here and is sure to be considered a Converge classic in a few years.

Towing Jehova (Demo) – 6/5 One of my favorite songs from “”When Forever Comes Crashing”” the demo quality gives this a harsh type sound which I felt it needed in the other version.

The High Cost of Playing God (Demo) – 4.5/5 The songs lyrics really left me speechless after hearing it, overall the music is good here but the lyrics make this one what it is.

When Forever Comes Crashing (Demo) – 5/5 a trippy type guitar riff starts this song and carries on once everything else kicks in. Jacob’s vocals sound have a static effect on his voice (due to the fact that it is a demo)

The Year of the swine (Demo) – 10/5 My favorite song off of WFCC. The breakdown at the end is mind blowing. The lyrics are some of the most emotional i’ve heard from Jacob Bannon. “”Just for one split second, I want to be the lucky one, not to have the pleasure of tasting the salt of tears when we kiss.””

Letterbomb (Demo) 4.5/5 – A slower song, maybe even the slowest from WFCC. Which only makes Jacobs vocals sound more throat ripping.

Locust Reign (Live) 5/5 – These two live ones are from the Poacher Diaries split album. They do a decent job of capturing a Converge live show, but trust me I saw them live in Sayreville, Nj on the 15th of July during SOTU tour and this is just one amazing live band you have to see for yourself.

This is Mine (Live) 5/5 Two words, pure chaos. Almost like being hit with a huge wave. or atleast that is how I feel after hearing this.

So, in conclusion if you love Converge, buy it. Enjoy.

Be the first to review “CONVERGE: Unloved and Weeded Out [Digi-pack] Check samples” Cancel reply 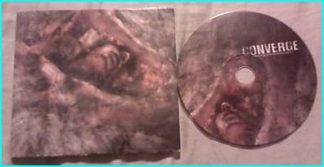 You're viewing: CONVERGE: Unloved and Weeded Out [Digi-pack] Check samples £7.00
Add to basket