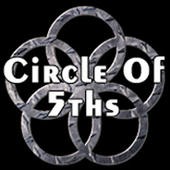 Sabbath, Biohazard and Rage Against The Machine and melody combine with some excellent female vocals. The music is mainly mid tempo and thrives on a thick guitar tone. Spotlight of the band is vocalist Shyra. Her vocals are upfront and not very aggressive. Which is in contradiction to the heavy music. Her voice gives the band also its own identity. Catchy chorus’, groove guitar and strong vocals are combined into an interesting sound.

TRACKS: 1. words 2. consummate 3. one day 4. american society
From the ashes of local heavy-metal favorites Drone rises Circle of 5ths, comprised of members from the now-dormant Drone along with the singularly named female singer Shyra. The group has mostly kept mum about this new project, but the band is ready to unleash a four-song EP and start gigging in the area. According to Circle of 5ths guitarist-vocalist Steve Mahoney, this new group is loaded with all the heavy guitars and rock grooves familiar to Drone fans, but coupled with a new emphasis on pop song writing. “”We’re trying to write catchy songs that retain an aggressive edge,”” Mahoney said. “”It’s way, way better than anything Drone has done. And we don’t want any preconceptions that this is just Drone with a girl singer. It’s a completely new sound.”” Catch the group’s dÃ©but tonight in Marysville. Fans of “”Behind the Music”” also may want to catch Circle of 5ths’ May 13 show at Stockton’s Weber Point. Shyra is a former dancer for MC Hammer, and her old boss is expected to be in the mix at that Stockton gig

Be the first to review “CIRCLE OF 5ths: Blurring the Lines CD CHECK AUDIO SAMPLES Sabbath, Biohazard, Rage Against The Machine” Cancel reply