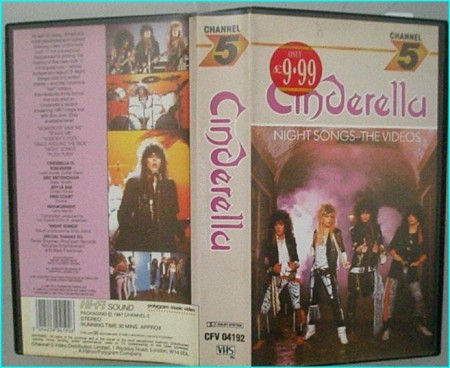 Night Songs-The Videos contains:
“Somebody Save Me”,
“Shake Me”,
“Nobodys Fool”,
“Once Around The Ride”,
“Night Songs”,
“Push Push”

Jon Bon Jovi discovered this Pennsylvania band, whose album is filled with the kind of catchy pop-metal his own band plays. Produced by Andy Johns.

Remember how cassettes smelled when you first opened em? I thought of that when I re-visited this album. The production is 80s to the MAX, high treble, thin sounding drums. But for me, Tom Kiefer was the coolest part of their sound. All growly and mean. And the videos for shake me and somebody save me were great with dudes flipping guitars around their necks. Cinderella were pretty cool.

I recall cold school nights driving around town with several friends, playing Cinderella on cassette. These songs have a raw edge that spoke to our angst and sexual tension with the opposite sex. (Ever notice how these hair bands were all men?) Even today, these early Cinderella tracks bring back good memories, and I remember every snarling word. Cinderellas sound is unique among metal bands, which is one reason they continue to stand out for me today. Though they never made it as big as other metal bands, Cinderellas tracks feel like coming home.

Biography
Hard rock band Cinderella gained success in the mid-’80s, turning out a series of million-selling albums and hit singles while placing music videos in heavy rotation on MTV. By the mid-’90s, the groups mass popularity had subsided due to professional setbacks and perceived changes in taste. But they continued to tour regularly well into the 21st century.

Cinderella was founded in Philadelphia, PA, in 1983 by singer/songwriter/guitarist/keyboardist Tom Keifer (born January 26, 1961) and bassist Eric Brittingham (born May 8, 1960), who quickly added lead guitarist Jeff LaBar (born March 18, 1963). Guitarist Michael Kelly Smith and drummer Tony Destra were also early members of the band, but they left in 1985 to form Britny Fox. Cinderella then added drummer Jody Cortez and continued as a four-piece. Insisting on playing original material, they performed in clubs and bars in Pennsylvania and New Jersey, and in 1985 Jon Bon Jovi caught one of their shows. He was sufficiently impressed to alert his record company, Mercury, which signed the band. Their début album, Night Songs, was released in June 1986. Shortly after its completion, Cortez left the band and was replaced by Fred Coury (born October 20, 1964). The LP was not an immediate success, but it gained momentum gradually while the band toured extensively as an opening act to promote it. It broke into the Billboard chart in July, and the track “Shake Me,” although it failed to chart as a single, got enough radio attention to turn up on Billboards Album Rock Tracks chart in August. On October 1, the album was certified gold. That month, Mercury released a second single, “Nobodys Fool,” accompanied by a music video that earned play on MTV; it broke into the charts in November and peaked at number 13 in February 1987. Its success further stimulated sales of the album, which was certified platinum in December 1986 and broke into the Top Ten by the end of the year; it peaked at number 3 in February 1987, and that same month was certified double platinum. In April, Mercury released a third single, “Somebody Save Me,” which peaked at number 66 in May. (The album was certified triple platinum in May 1991.) 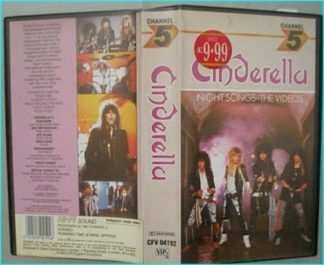