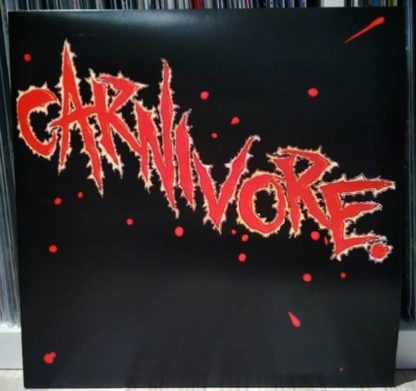 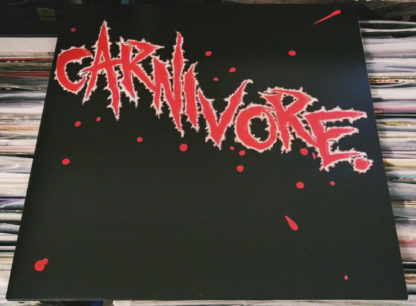 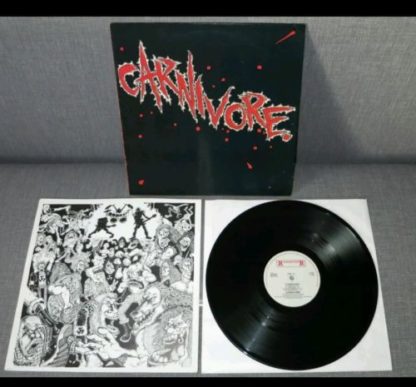 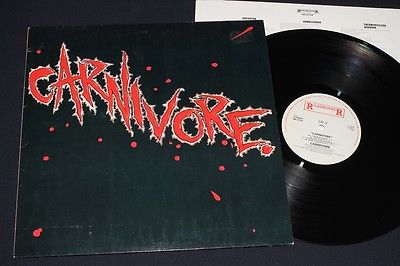 Back to a time when Roadrunner released good albums still comes this monstrous album. Carnivore was an American crossover thrash band from Brooklyn, New York founded by the late singer and bassist Peter Steele (Type O Negative). Carnivore released their self-titled debut album Carnivore in November 1985 For this album, the band spelled their names in what they thought were “exotic” ways, Petrus T. Steele and Louie Beateaux. The band often dressed as warriors in torn clothing and spikes attached to hockey gear during their live shows at this period

The debut album was heavily influenced by the contemporary New York metal scene. It also drew inspiration from Black Sabbath and early Judas Priest. The ‘post-apocalyptic’ theme that dominated the first album was apparently inspired by a dream Pete Steele had and which became the basis for the lyrics of “Predator”, the first song from the original album. The lyrical theme was then expanded on to describe human society (or the lack of one) between imaginary World Wars 3, 4 and possibly 5 (as referenced in the song “World Wars III & IV”). Other lyrical themes included nihilism, anti-religious sentiment, cynicism, and explicit but tongue-in-cheek depictions of gore and despair.

Manufactured in the Netherlands (back cover).
Made in Holland (disc labels).

There is no numbering on the back cover, track positions are listed on the labels as 01 to 08.

Greetings and felicitations, children of technology. Welcome to the post-apocalyptic world of Carnivore. Few bands are hardy enough to survive thermonuclear destruction but, led by the imposing Petrus T. Steele, this trio of New Yorkers had what it takes to survive World War III (and IV.)

Along with Keith Alexander on guitar and Louis Beateaux on drums, Petrus and Carnivore unleashed their S/T debut album in 1985. It’s a raunchy and primitive mix of Punk and Metal with a hefty dose of Doom and Steele’s beefy vocals. Although the style is crude the performance is tight with live energy and just enough production effects to sound suitably futuristic. Predator kicks the proceedings off and sets the scene of life beneath the rrrrruined city. Male Supremacy has a dirty Crüe-style opening riff and unforgettable chorus. Armageddon has rampaging Crossover Thrash velocity and another golden chorus hook. There are also playful, musical detours: God is Dead’s chorus is mellow bongo-driven weirdness and Male Supremacy culminates in romantic balladry as Petrus returns home to his woman after a hard day’s war.

The second side has the remarkable Doom sections (the “Crush Kill Destroy” section of Thermonuclear Warrior for example) and the rollicking, propulsive World Wars III and IV which ends the album on a high. Lyrically, Carnivore stick to what they know: the life and philosophy of post-apocalyptic, cannibal barbarians hunting for unsuspecting victims to chow down on. It’s something we can all relate to. The whole album is right up my Venom-loving street: filthy and rowdy with the hyper-masculinity of Manowar and a pre-GWAR sense of fun and mythology that wisely stops short of out-and-out comedy.

Petrus T. Steele would later change his name to Peter Steele and go on to great success in his next band Type O Negative. There is very little of Type O’s seductive, swooning October Rust style here but there are plenty of other similarities: the Hardcore elements of Type O’s debut Slow, Deep and Hard and later tracks like Kill All the White People. The shock-tactic humour, bass-heavy Doom riffs and songwriting chops are also heavily indicative of Steele’s future musical direction. Despite their talent for post-nuclear survival, Carnivore only lasted for one more album before calling it a day but their music has proved more resilient. Carnivore is full of choice, prime cuts. Bon Appetit. 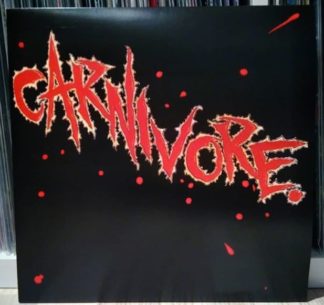