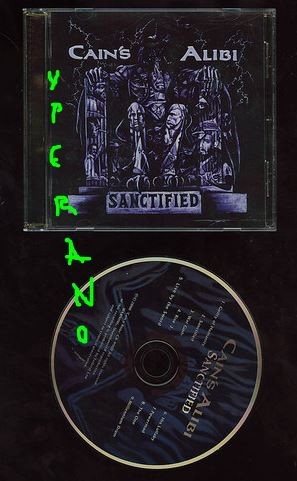 “Sanctified,” by Cain’s Alibi, is an exploration into the dark and twisted side of humanity. Cain’s Alibi has a strong and noticeable hair band influence, however, this shit blows the crap out of all the hair bands of the 80s. The musical interpretation of Cain’s Alibi is at the same time haunting and inspiring.

Never judge a book by itâs cover, no matter how weird the band name or oblique the CD cover. Those were my impressions at first but in no time I was humming and bopping to the heavy muffled crunches and harmonies of the Bill Clinton inspired lyrics of  GUILTY OF HUMANITY . The cool sounds of Cain’s Alibi don’t stop there. With  SANCTIFIED  thumping and well heard bass lines is the song that should have made Ozzy’s ‘Ozzmosis’. Lines such as  I sell what I think that you want to hear, You buy every word that I say + I break every promise I make to you, Its all part of the game that we play  are my kind of lyrics; direct, to the point and speak the truth but they are not always so simple. In general they exert interest and are thoughtfully provoking. They cover topics such as society’s sins, political powers, human gullibility, war and how people control their own destiny. What does the music sound like you ask? Well, most of the times I kept getting hit with sounds of Sacred Reich in their days of  The American Way  but not speed wise. They also tinker with the sounds of Pantera’s  “Walk” in  RISE UP (One of few songs with many backup vocals, which they could have done more of), Alice In Chains and a bit of Soundgarden. So their music is very 80;s bound metal. The production and mixing in the studio could be factors of this cause and effect. Yet on songs such as  HIS LULLABY, POWERMAD  and  MILLENIUM DRUM  Cain’s Alibi change their style some with references to slow bluesy rock and roll and progressive rock (Rush, Enchant to name a few). Much to my surprise this is a strong melodic release that still sounds great after countless. On many changes and breaks, the sing alongs continue. The duties of the musical and lyrical arrangements are listed as shared. Who you say would this CD be geared for? Well if you are one of those who believe a vocalist makes or breaks a band then Paul Miller deserves a strong merit and this is for you. Catchy hooks, melodies, a few guitar surprises and plenty of sing alongs are some of the bonuses SANCTIFIED has to offer

Great progressive metal cd from Minnesota. Very well produced CD.
Cain’s Alibi are a band to watch; this is only their second release. It is very strong and varied enough in sound to keep you interested. Recommended.