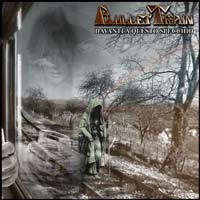 Pure heavy metal but with a lot of thrash metal influences in many parts.

1. IN FRONT OF THIS MIRROR Davanti a questo specchio 05:20

Unexpectedly, some passages of the opening track from which it takes title this demo, see the delicate arpeggios, the subtle vintage vibe, the brackets stiffened from a vein hard and certainly the particular song acute Cosimo Crott, I have awakened memories of the distant past, shredded ancient and historical landmarks of rock Italic signed by monuments such as Le Orme, New Trolls or Balletto di Bronzo. Of course I speak of reverb and very personal, based on the stimulus of little signs barely perceptible, which led me to make this analogy as risky within a context certainly quite different. It is in fact a very contemporary work by Bullet Train, Tuscan group recently established (2003), but formed by musicians of good experience, working for many more years in other bands voted to traditional metal. For this reason, while recognizing the sextet Tuscan influences attributable to the prog settantiano, also claims the proximity to the thrash metal genre, so a blend stylistic airing on paper rather bold and not easy to implement. A confirmation of the double attitude of the Bullet Train emerges from a song like “”Song of anger””, which waiver forms prog-rock to become heavily indebted to the school thrash bay-area, focusing on the impact of aggressive purely heavy and massive rhythmic cues and frantic. There is no time to ask questions about the identity of the dominant Bullet Train returning elegant and nostalgic tones of the remarkable “”The Castle of time,”” good episode in crescendo then covered with a patina flavor seventies. Song that coagulates effectively both classic prog tradition that modern interpretations metal, where the outstanding work is not intrusive keyboards and the dry and scratchy guitars, nocturnal atmosphere and thoughtful and a melodic aspect particularly intriguing. Perhaps the addition of a tail instrumental wider would be beneficial, whereas the piece closes abruptly and rushed, but overall the final result looks very positive. Finally, “”A Silvia”” incorporates part of the previous theme thanks to a development bitter-sweet, which takes the form of a romantic ballad. Here the carpet of guitars robust leaves ample room to the stage voice and text bitterly dedicated to young girls and the blossoming of their femininity. If I wanted to insist on parallelism initial bring up the famous “”game girl”” would be too easy. Considering also positively disc box very organized and professional, it is clear that the test of the Bullet Train shows a group with all the papers in order to pursue a future discourse interesting and original. Probably you will need some adjustment style, because at some point the sound seems too retro-prog to appeal to fans of metal and other too edgy for lovers of vintage rock. Unless they can in the complete integration of the two lines, an operation for the moment only at the embryonic stage.

Founded in 2003 as a collaboration of various musicians belonging to two distinct groups, the Tornado (melodic thrash) and Twilight Zone (power metal), the Tuscans Bullet Train has always been dedicated to the revival of a heavy metal mold 80, with varied and enjoyable inserts thrash and progressive settantiano. Components, such that we find explicitly in the first demo-cd of the band, “”Deny Religion”” (previously reviewed in these pages) and, to a slightly rivisionata, even in the new effort of the Tuscan band, “”In Front Of The Mirror””. Four pieces, all sung in Italian, which run more or less covertly territories very close to the world of rock, thrash and progressive, giving a lot of space to arpeggios and the guitar in general. Compared to the previous demo-cd, then, we find the Bullet Train engaged in the research and manufacture of mechanical sound very intimate and personal, ranging from one dimension to another with very sound craftsmanship and expertise. Symptomatic, in this sense, the opener “”In Front Of The Mirror””, the title track very apt and very vibrant. Very specifically, in addition, also the final “”A Silvia”” in which the voice of Cosimo hurtling always shades of very high despite the rather relaxed atmosphere of the song … To conclude, in short, the Bullet Train confirm the good things they did catch a glimpse with the previous work, showing that they have been working hard, looking for a way more personal and varied.”