Bullet LaVolta was an alternative rock band from Boston, Massachusetts that was originally formed in January 1987 by four college disk jockeys: Clay Tarver (guitar, now of Chavez), Bill Whelan (bass), Corey “”Loog”” Brennan (guitar) and Chris “”Cruster”” Guttmacher (drums). The band later added singer Yukkie Gipe after he responded to an advertisement. They played their first show at a dive bar in Boston called Chet’s Last Call to a crowd of about fifteen people, but soon became one of Boston’s most popular live acts. They gained most of their notoriety by playing college shows in Boston (usually at either MIT or Harvard, with bigger acts like The Lemonheads, Dag Nasty, and the Rollins Band). 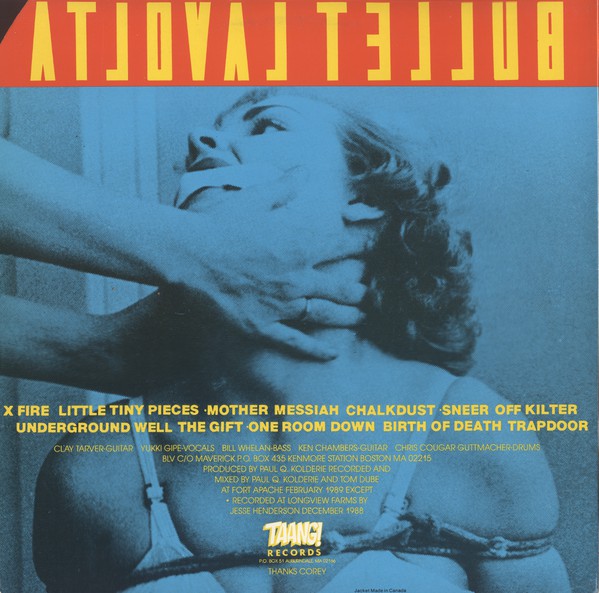 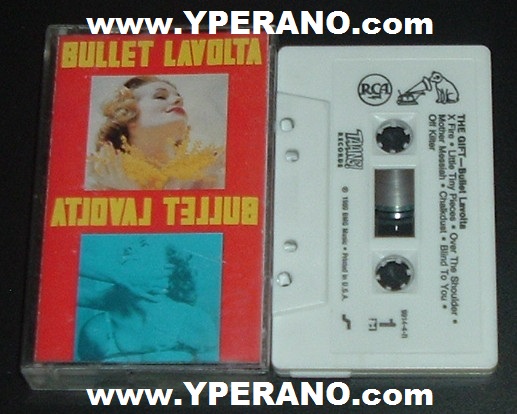 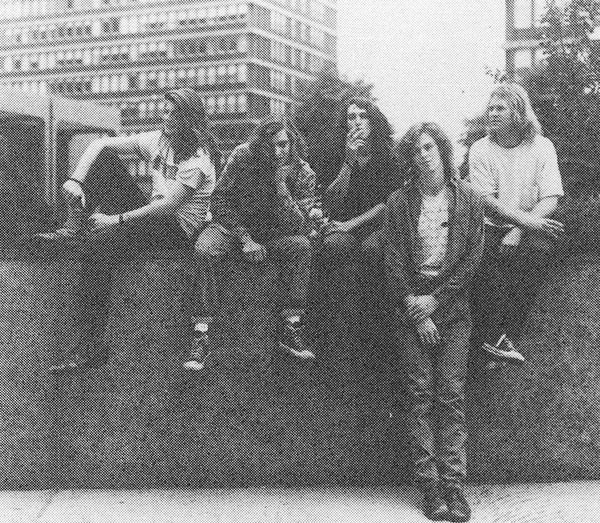 Being from Maine, I was pretty into what was coming out of Massachusetts (Maine had no national acts, The Brood were an international hit – but most people stateside had no clue) and in the late 80’s, it was pretty awesome:  Dinosaur Jr., Pixies, and Bullet LaVolta were the bands I most enjoyed.

Like a lot of bands of the era, BLV were a post-hardcore band that started to inject some 70’s rock into the mix.  However, unlike many of the SST and Sub Pop acts who leaned more toward Black Sabbath, Stooges, MC5 and Led Zeppelin, BLV tapped Thin Lizzy, AC/DC, Van Halen, Boston and Aerosmith along with the usual Black Flag, SSD, Husker Du and, of course, Mission of Burma attack.

The Gift was probably their best showing; the first EP was still heavily swayed by hardcore, while Swandive had the band going way too far down the Jane’s Addiction / Soundgarden path (needlessly, as the album dropped the same day as Nevermind).  This album had the perfect synthesis of punk snarl, hard rock balls and unimpeachable pop chops – never too clean, but never too sloppy either.

For a band that almost no one outside of New England remembers, there was quite a buzz for these guys in the days before Mudhoney’s crash landing on the scene.  Having a few other like minded acts (namely the Moving Targets) on the Boston scene, the press even toyed with dubbing it ‘speed rock’.  They put on high energy shows (even in their darkest period they were a fantastic live act) and had a knack for catchy songs that didn’t sacrifice power – it seemed like it was gonna happen for them. It didn’t.

The album is tight and terse, thanks in no small part to fairly nubile producer Paul Q. Kolderie’s (just about everyone in the 90’s Alt Rock era) spartan production (similar to – but more dynamic than – Dave Tarling’s SST work).  There are a handful of tracks that were recorded at different times by different producers, but it doesn’t shake up the whole too bad.

The key tracks are the undeniable classics that come from the debut EP, “Dead Wrong”, “Autopilot” and “Over The Shoulder”, in particular, while “Little Tiny Pieces”, “Chalkdust”, “Underground Well” and “Birth of Death” are the strongest of the new set (though there are really no horrible tracks – while “Mother Messiah” is a bit poppier than I can generally stomach, I can’t deny the chops in producing such a track).