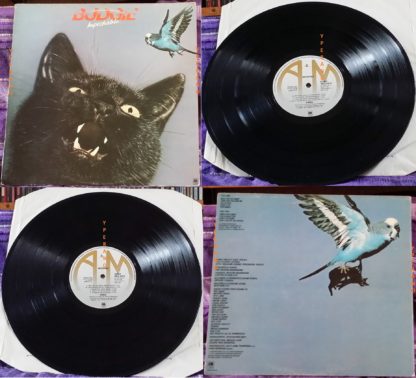 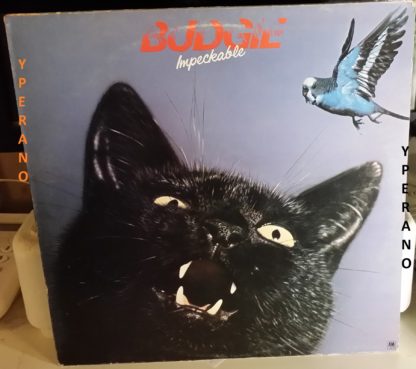 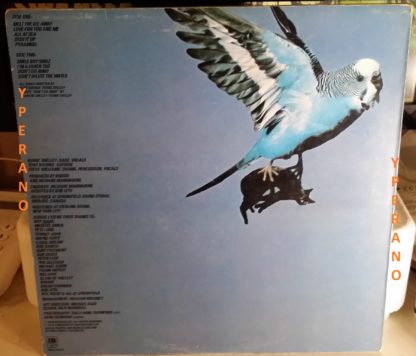 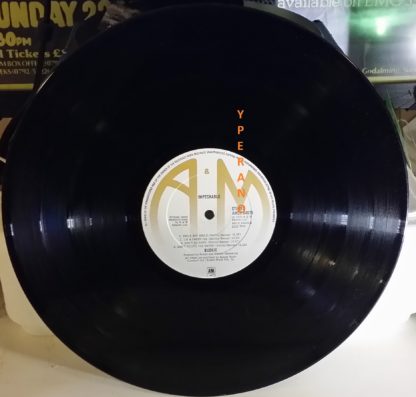 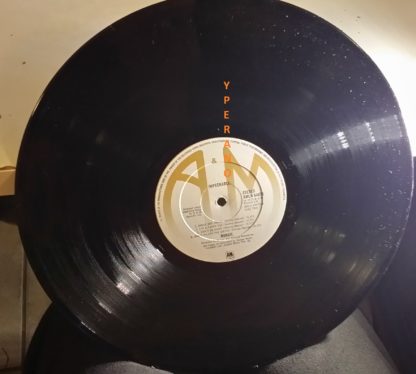 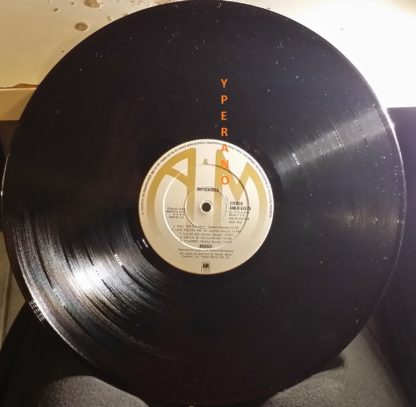 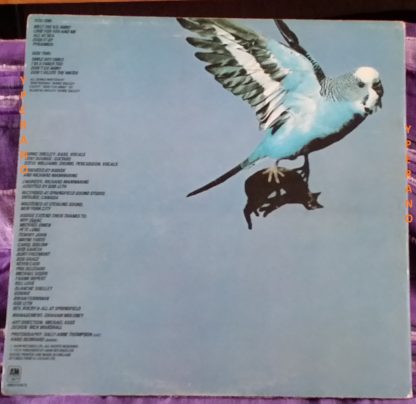 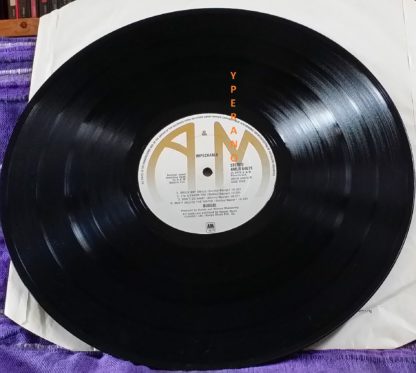 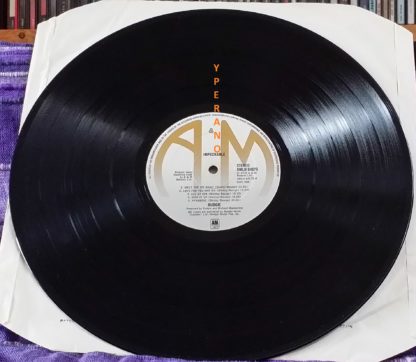 BUDGIE Impeckable LP an audio review of the album:   http://chirb.it/wAaH0N 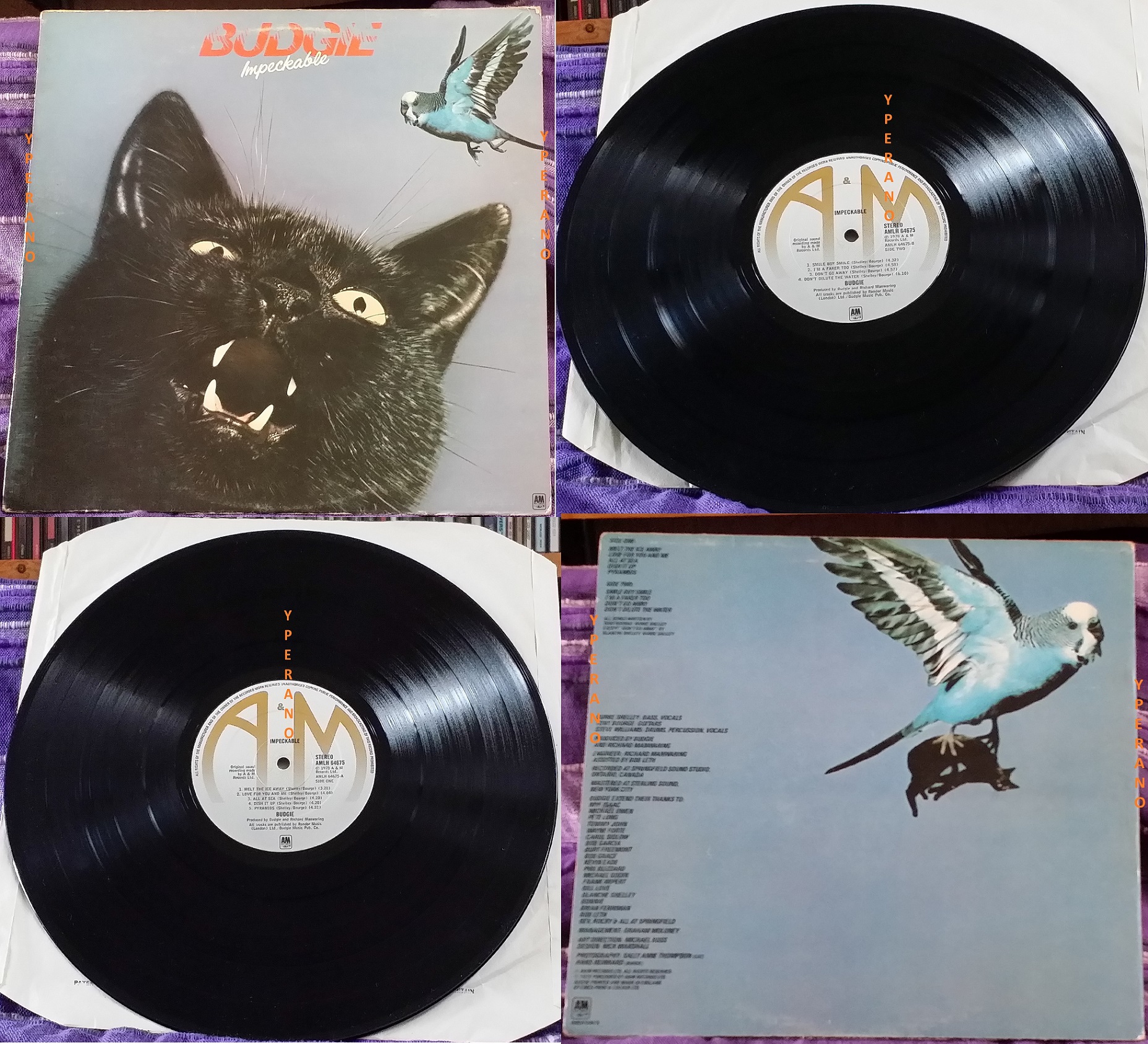 American thrash metal band Megadeth released a cover of “Melt the Ice Away” as a Spotify bonus track on their 2016 album Dystopia.

Joy of Budgie – 87%
Impeckable, the seventh album by Welsh heavy metal underdogs Budgie, is in many ways their definitive album. On a trail blazed with more classics than otherwise over their all-too-brief, not-too-usual career, Impeckable is like the crossroads where all of their distant, sometimes even contradictory qualities meet and reach their logical fruition. It is arguably even more eclectic than the divisive Britannia album, and yet it can be considered their most accessible, likeable record. In isolated moments it is peculiarly heavy for a ’77 recording, yet elsewhere it is subtle, candid, and even sweet. Impulsive and free-spirited on one hand, yet indisputably the mature product of veteran artists on the other, it is an album that truly lives up to its own lofty handle by not only presenting a classy cadre of rock ‘n’ roll brilliance, but in displaying perhaps the purest essence of its creators’ collaborative efforts.

But first examining the record on a superficial level, the new listener will be pleasantly surprised to find that the Bourge/Shelley/Williams lineup has come full circle, completing the same creative arc that the original Bourge/Shelley/Phillips lineup once did: progressing from a stunning, innovative debut into an uneven, experimental sophomore effort before finally emerging as a focused, confident declaration of prowess. In regards to the various styles that the band had been fooling around with, Budgie is now a master of all trades and jack of none. It’s a stretch to even continue considering them as a heavy metal band at this point; the heavy moments may seem rather brief and isolated as the band leaps about chameleon-like among varied musical environments while Bourge and Shelley sport perhaps their least dissonant tones yet. But they excel at clever rock ‘n’ roll hooks (“Love for You and Me”, “Smile Boy Smile”), they’ve fully cultivated the art of balladry and emotionally poignant compositions (“All at Sea”, “Don’t Go Away”), and they’ve mastered their unique take on supa-phat funk rhythms (the irresistible groove of “Dish It Up”). And all the while, they’ve retained a link with the primitive heaviness that got them to this impeccable crossroads, presenting the quickened chug of New Wave bangage (“Melt the Ice Away”), snaky chromatics fit for a tyrefitter’s grip (“Don’t Dilute the Water”), and even a self-referential throwback to their own heavy days gone past (“I’m a Faker Too”). There’s a bit of just about anything anyone’s ever liked about this band expertly strewn among these nine tunes, how could it not be recommendable merely on these grounds?

But it is Impeckable’s most intangible quality that I personally find to be its most fascinating. And that, simply, is its sense of pure joy. If this seems contentious, it’s merely a symptom of the quality’s extreme scarcity in rock music in general, even more so in metal, and practically unheard of on a studio recording (live recordings tend to capture this fleeting moment better than the endless takes of the typical studio drudgery). Let it be known that I’m distinguishing the sense of “joy” from the sense of “fun” that more regularly pervades certain spheres of the metal underground. Sure Tankard and Municipal Waste and GWAR are having fun making their records; I’ve no doubt, since I’m sure having fun listening to them. But I’m talking about a deeper feeling: the sense that every note, every beat played on this record is a reflection of the immense pleasure and satisfaction that these three gentlemen derived from writing and performing music together.

It’s hard to describe… how does one truly relate such a feeling into words? But I do feel it every time I listen to this album, in every unaccompanied riff and beautifully crafted solo from Tony Bourge (arguably his finest work in both regards), in each of Burke Shelley’s free, emotive vocal melodies (which range from a shrill wailing to a soft and lyrical croon), and even in the uninhibited manner of Steve Williams percussive accompaniment. This would be the last album these three would make before Bourge departed for different ventures. But if there was any tension between the trio during the recording of Impeckable, it doesn’t manifest itself in the slightest bit. The chances of me meeting any of these fellows to confirm this are pretty slim, but I would bet any money that all three of them had a blast making this record together; you can just feel it dude, I swear it. The pure unadulterated joy of making music with your mates: that is this album’s most memorable quality and it elevates it from a good career-summary-type send-off into a treasurable, meaningful farewell.

Impeckable then is a true expression of the band at their most comfortable. If I’ve rated it lower than several of their early efforts, it’s simply because, despite this album’s faultless presentation, I’m forever inclined toward the group’s (and most every other group’s) less mature recordings; despite the occasional missteps and unusual directions/decisions, the enthusiasm of youth propels them to their greatest heights. This album is a consistently high plateau, “objectively” better perhaps, but it’s the “peaks and valleys” albums that I find myself returning to the most.

That aside, this is another fine addition to Budgie’s hearty catalogue and for most, should be the last word on ‘em. Budgie without Tony Bourge is like what Budgie would be without Burke Shelley i.e. not Budgie at all. For the daring, there’s more out there to discover, but for the discerning listener, the original seven are all of the ones worth knowing. 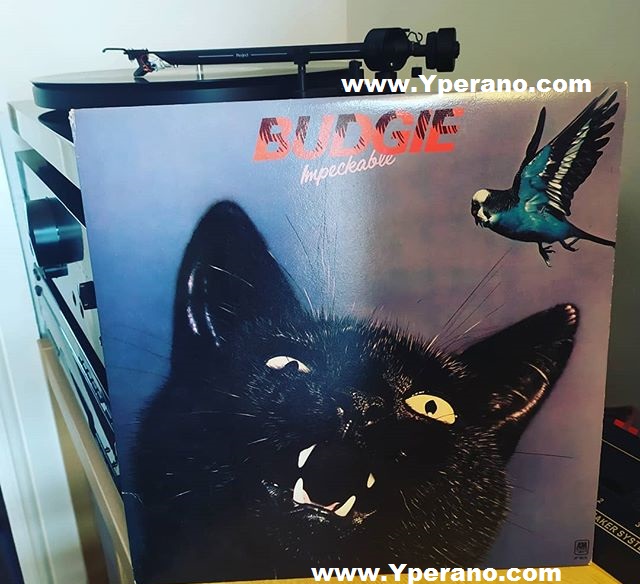 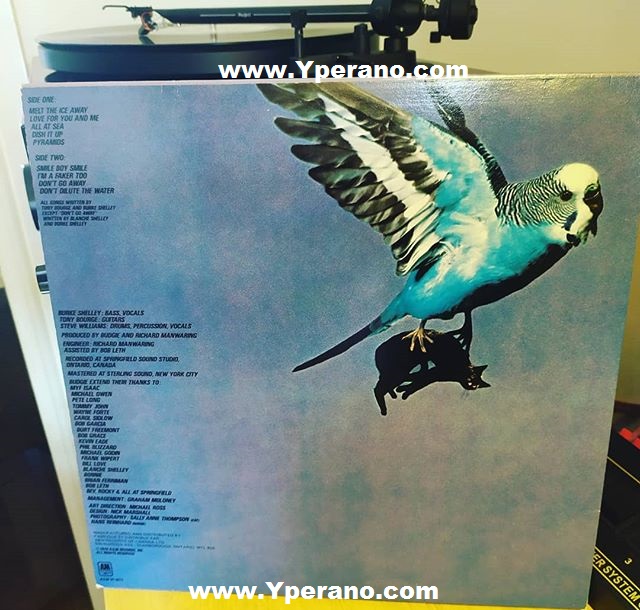 An overlooked classic by underrated legends – 100%
Always loved this band’s amazing and powerfully catchy mix of punchy heavy rock and melodic, almost progressive leanings. Unfortunately, many of the albums after In For The Kill are not only rather hard to come by but rather pricey when they are found. Having found a used copy of the previous album If I were Britannia, I’d Waive The Rules years before, an offering I found to be less then satisfying save for 3 or 4 cuts, I had avoided this 1978 swan song by the band with original guitarist Tony Bourge. I was however familiar with several tracks via The Ecstasy Of Fumbling comp.

But, this album DELIVERS in spades and has gotten zero attention or love from even the fans. Starting with Melt the Ice Away a rocking tight track with much better production than this band has previously seen which gives way to the mid paced and slightly funky Love For You And Me, then into the melodic All At Sea with it’s great build up chorus and back down to melodic verse which is a hallmark with this great band.

Next up is Dish It Up which is a great title for the funkiest track this band has ever produced. Pyramids is an amazing mix of every nuance, lick, power chord, funky breakdown and melodic passage that this album holds one of the albums many highlights that I would play to someone who wanted a song to sum up the album as a whole.

Next up is the bouncy, playfully funky Smile Boy Smile which featured prominently in the bands live sets from this time and again has some really great breaks, mixed with melody and power chords. This song sits perfectly between the aforementioned Pyramids and the lights out I’m A Faker Too which has an In For The Kill feel mixed in with the slight funky melody of the verses which give way to a face cracker of a chorus, really wanna hear a live version of this and Pyramids.

Don’t Go Away follows as another in a long line of great melodic, setting-a-mood Budgie songs, complete with great echo effects and nightly cricket sounds before Don’t Dilute The Water rounds out the album, and although a little bit long in the tooth manages to combine elements from the entire album – great chords, great melody, a bit of funk and great changes between them all. This band will always be one of the single most underrated, overlooked, cast off, and forgotten of the 70’s heavy rock, proto metal bands. This their 7th album is easily their best produced album in which everyone including Bourge’s guitars can be heard and heard very well, where many of the earlier albums he seems to be in the background in generally poorly produced or mixed albums.

This is a great last album with Tony Bourge that just drips with his great guitar work made even better by the rest of the band and overall solid production where past albums sometimes sounded uneven here and there. Definitely the best of the 3 albums made for A&M records before giving way to Big John Thomas and the big power chord less riffing NWOBHM era of the band. If you’re a fan of this band’s sound don’t pass this up as this has become my most listened to Budgie album. 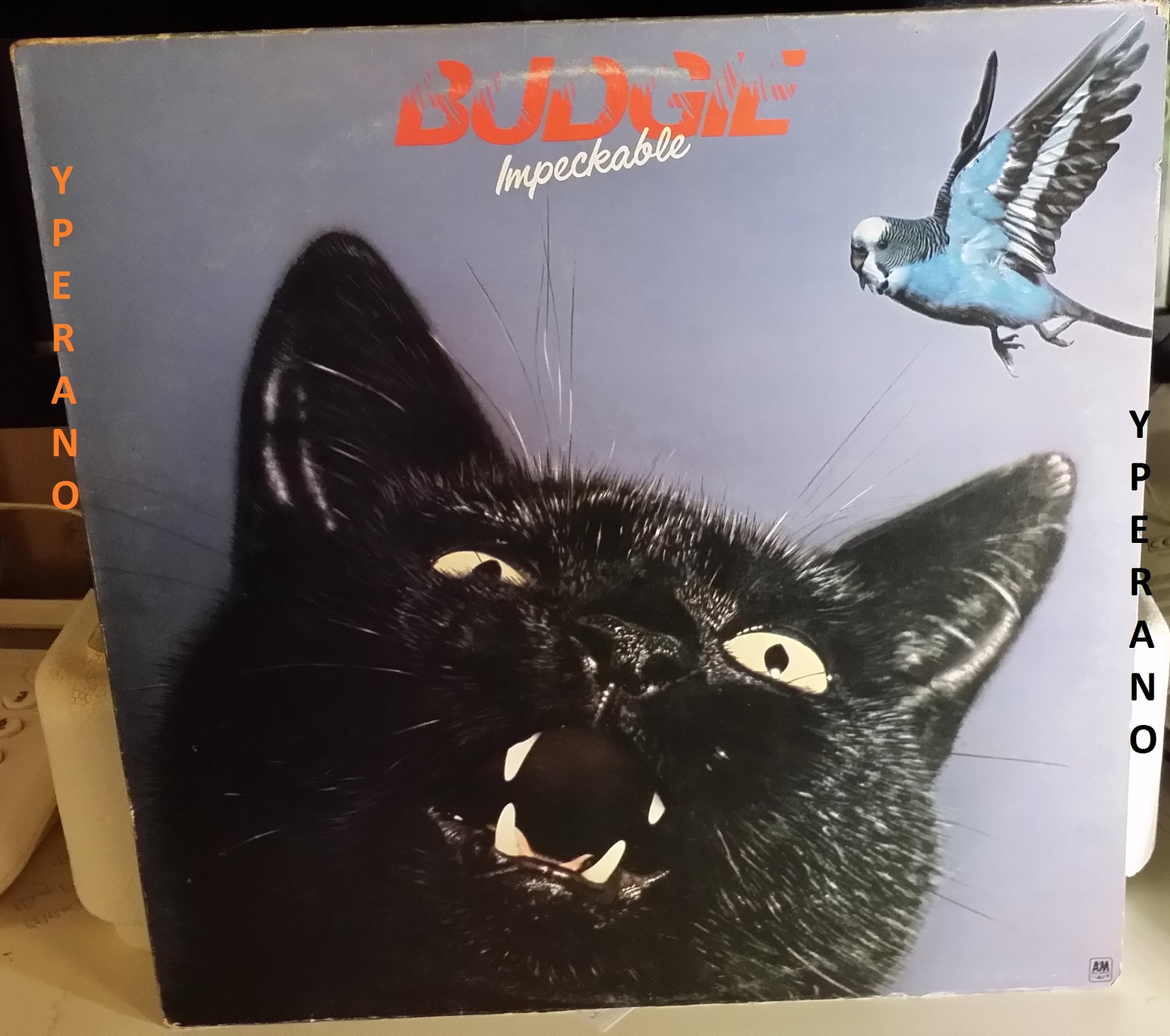 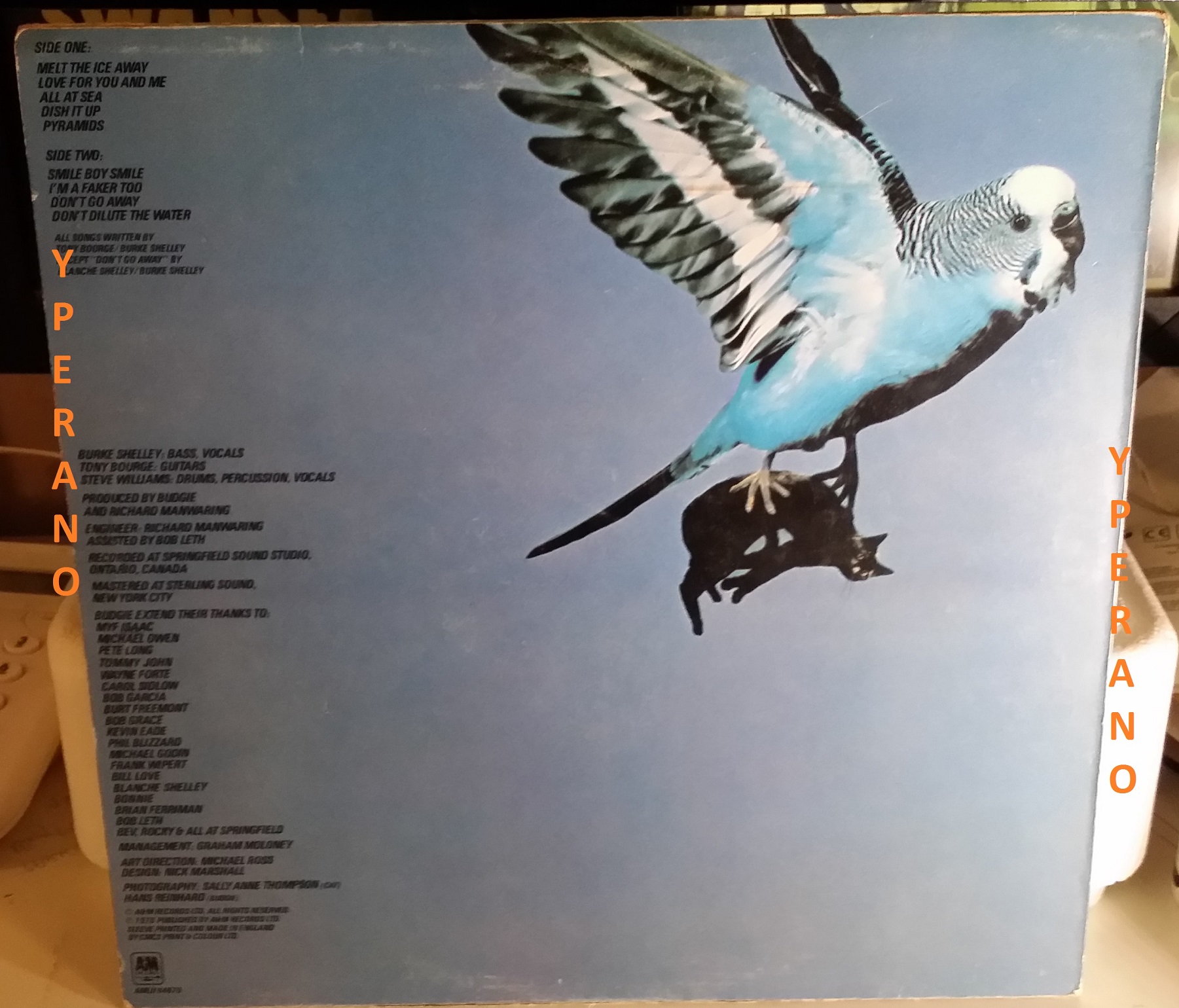 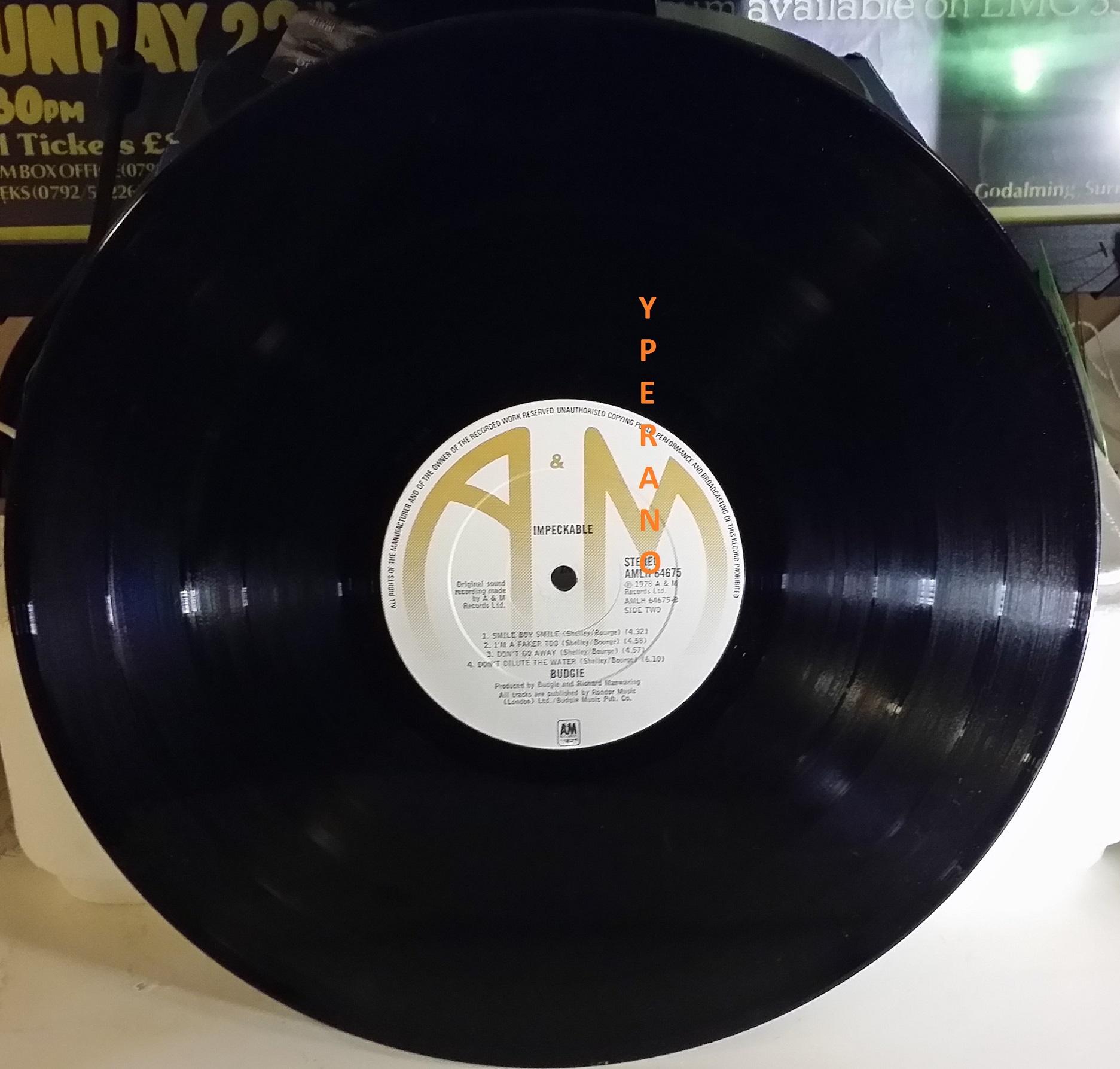 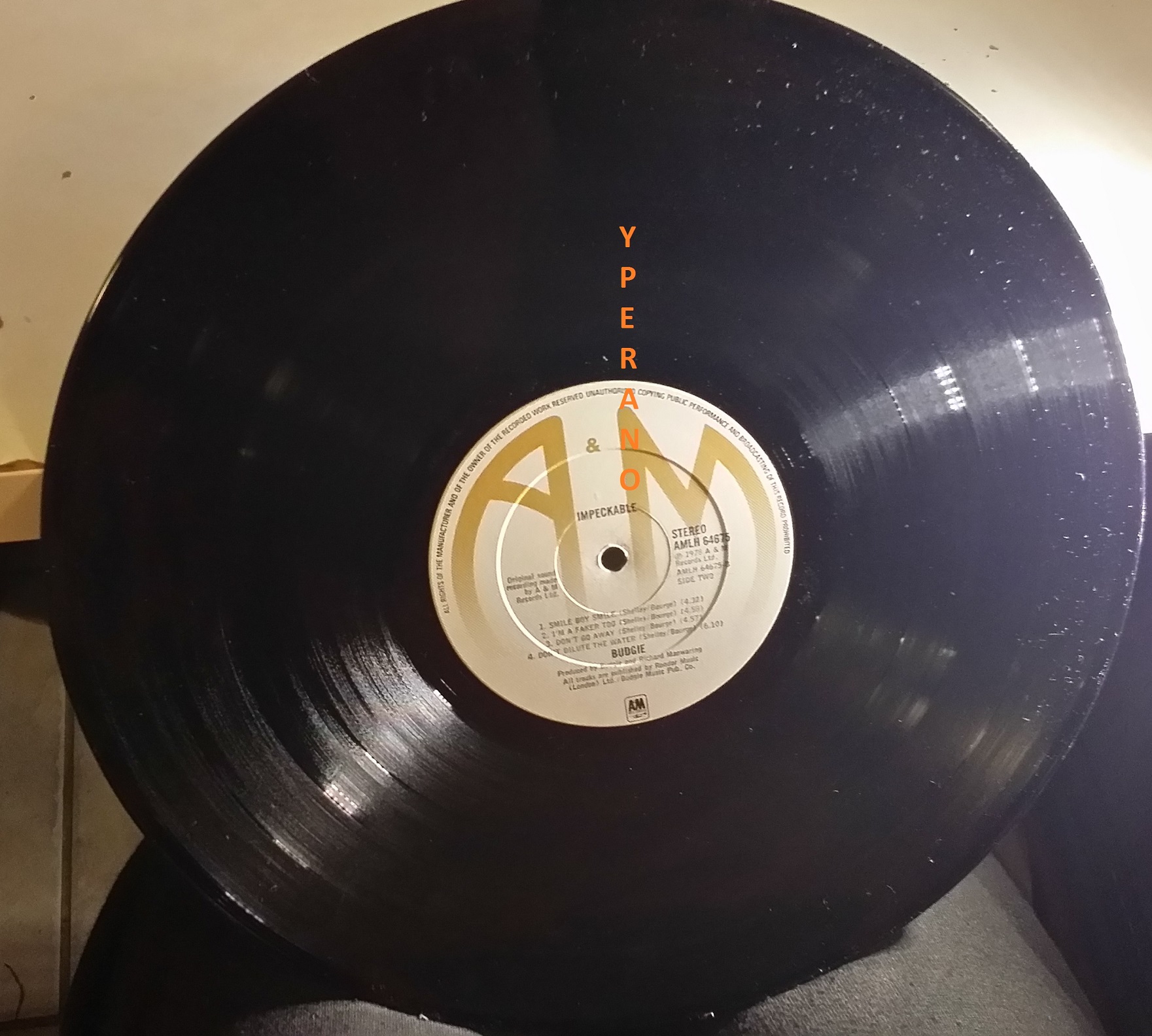 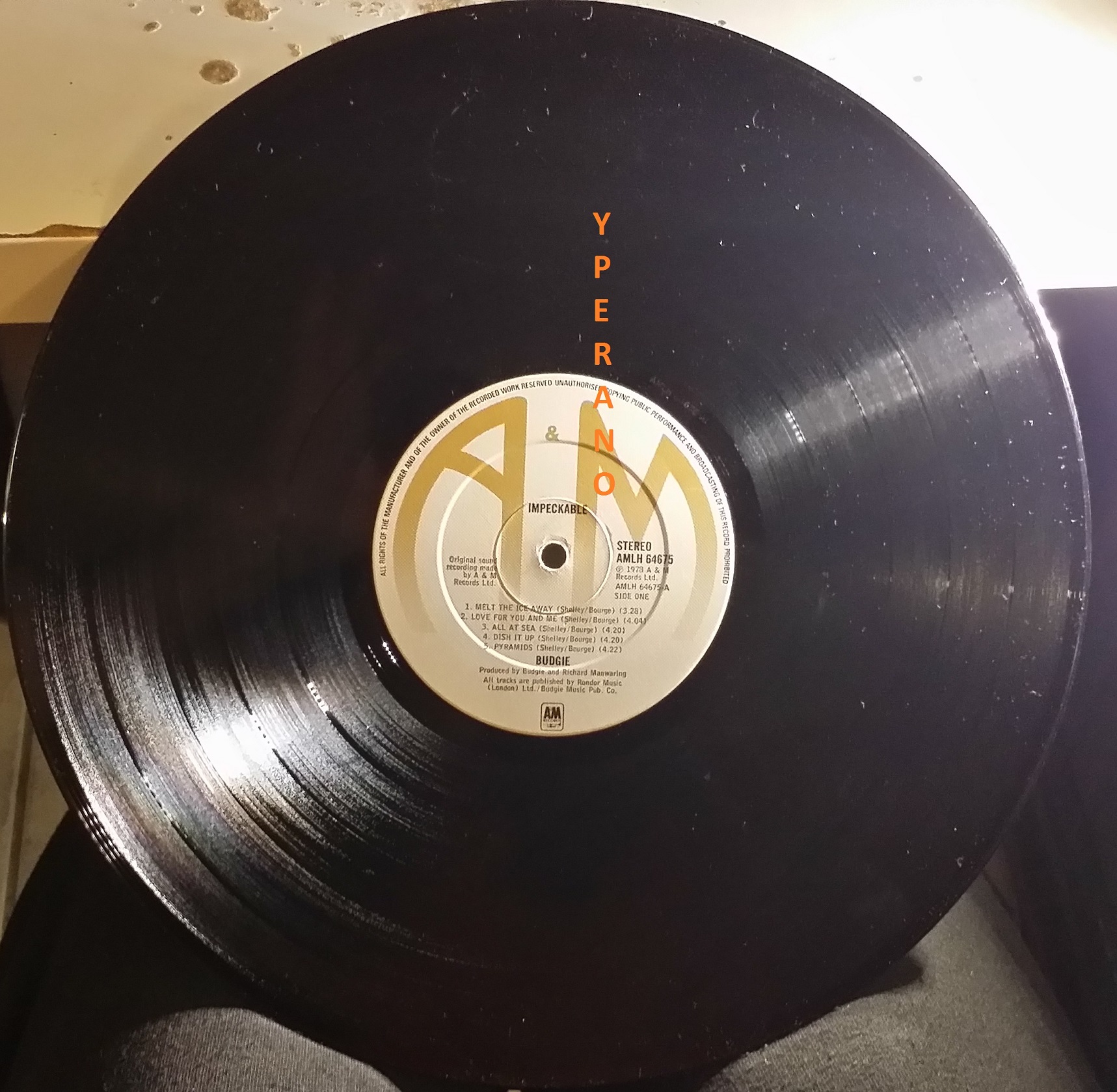 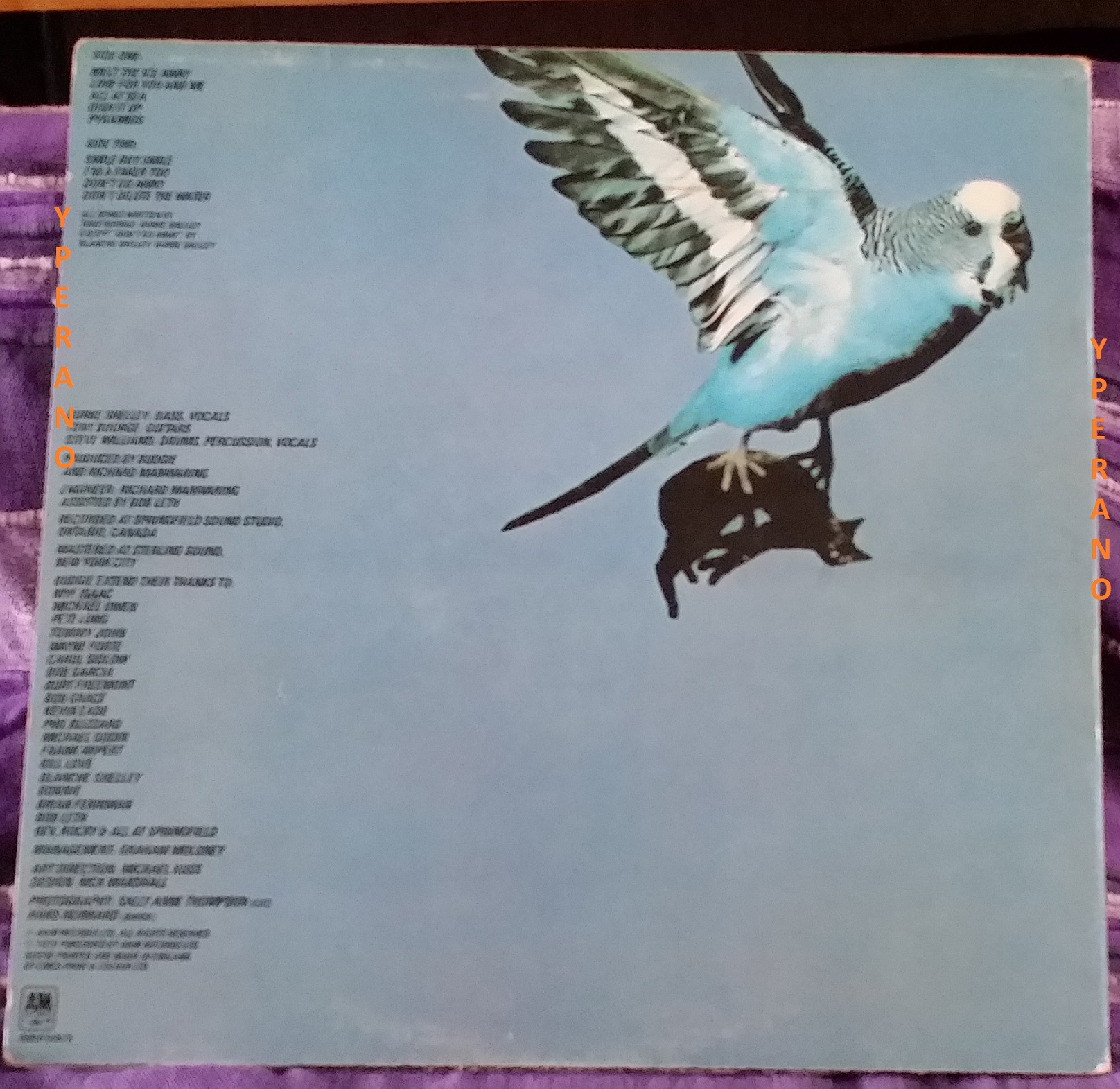 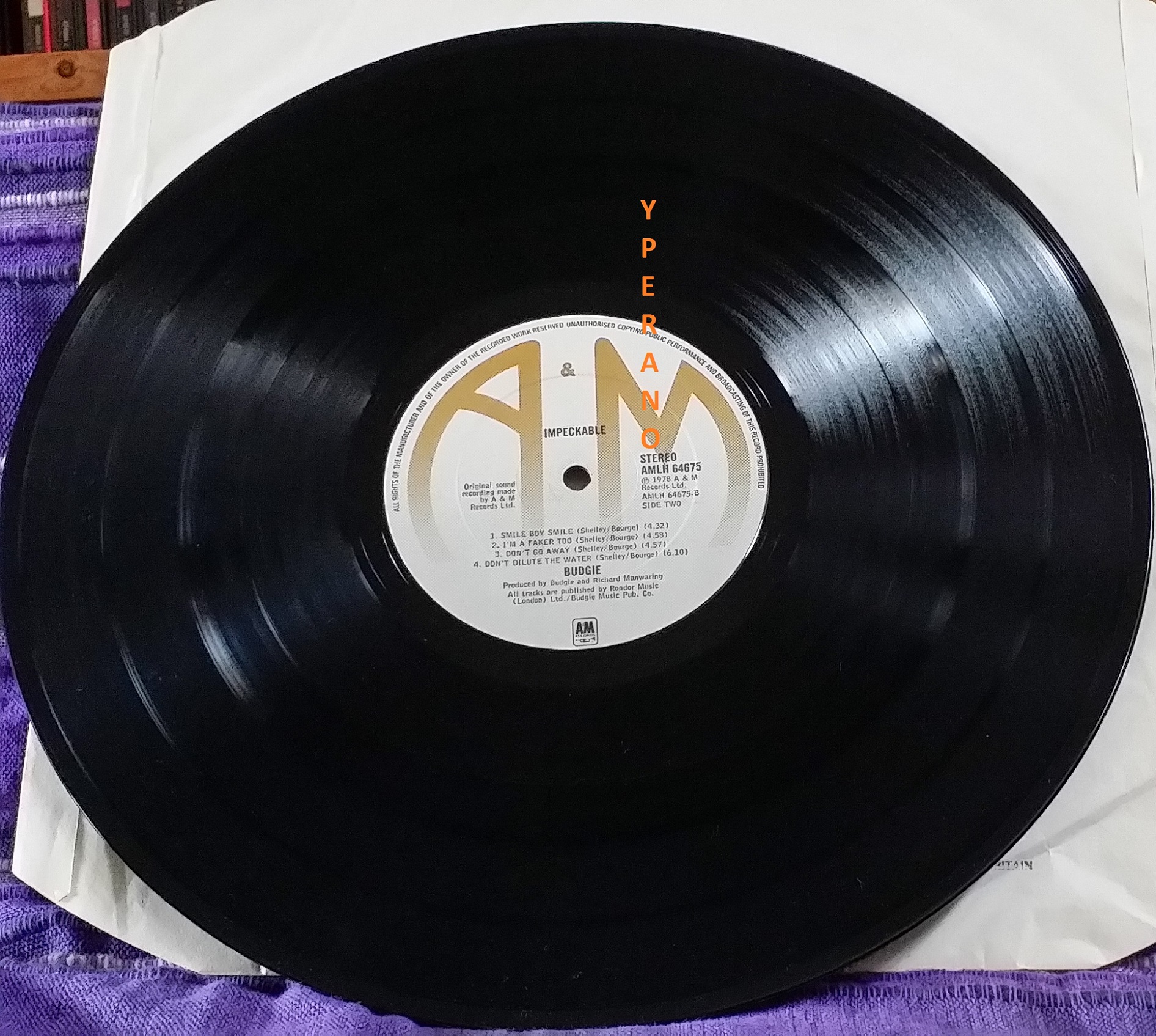 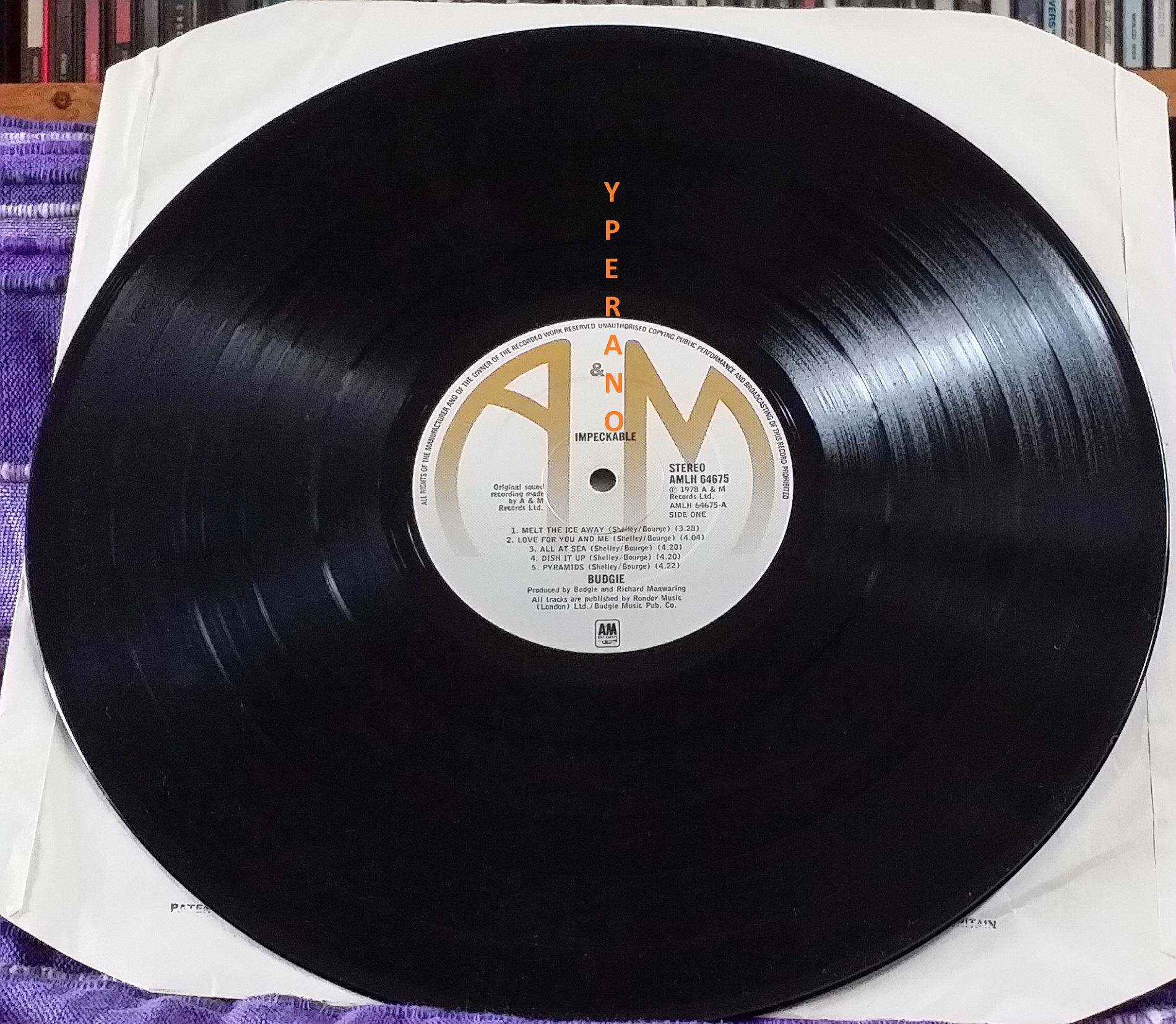 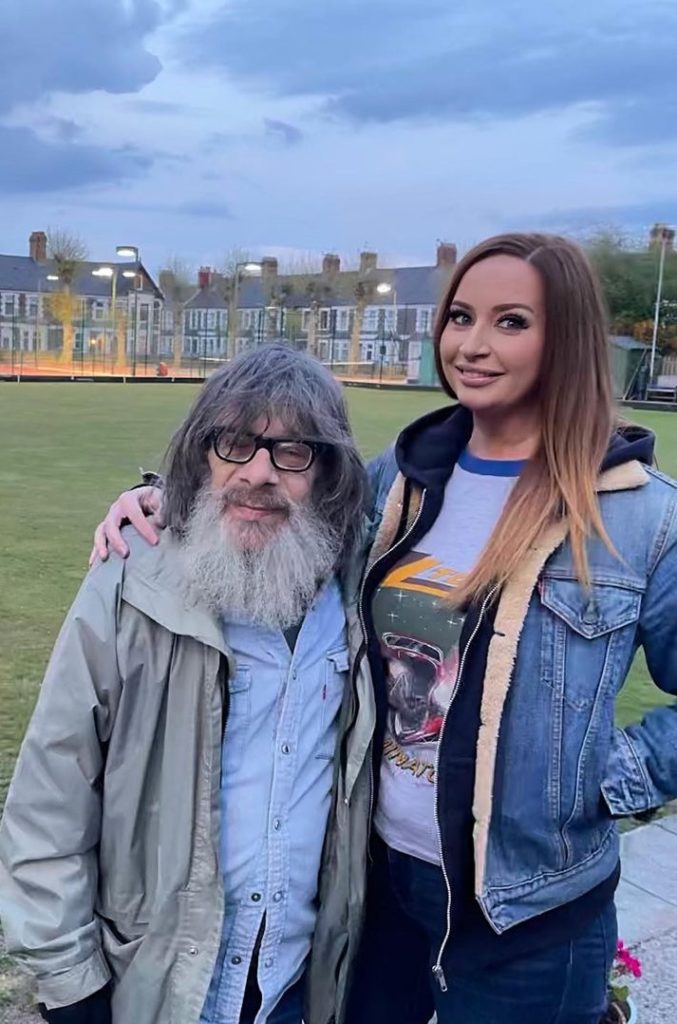 Be the first to review “BUDGIE: Impeckable LP 1978 UK. Megadeth covered the song “Melt the Ice Away” from this album. Check audio + rare videos!! Check audio and video reviews too.” Cancel reply 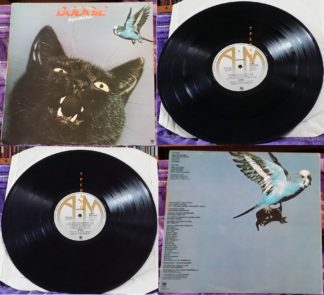 You're viewing: BUDGIE: Impeckable LP 1978 UK. Megadeth covered the song “Melt the Ice Away” from this album. Check audio + rare videos!! Check audio and video reviews too. € 17.96
Add to basket