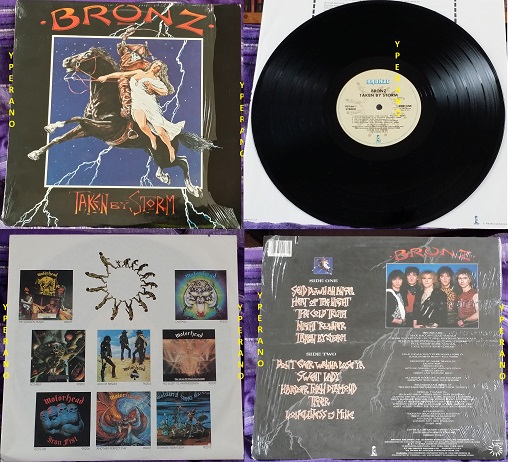 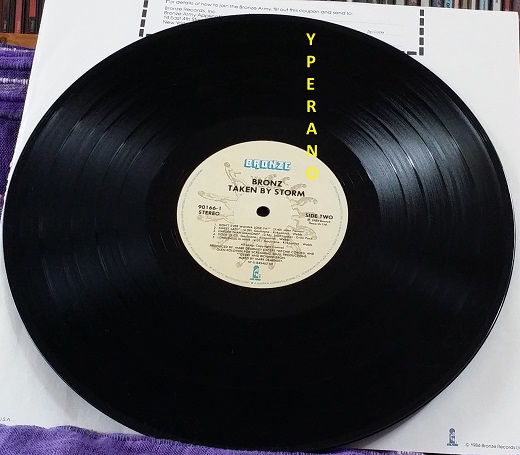 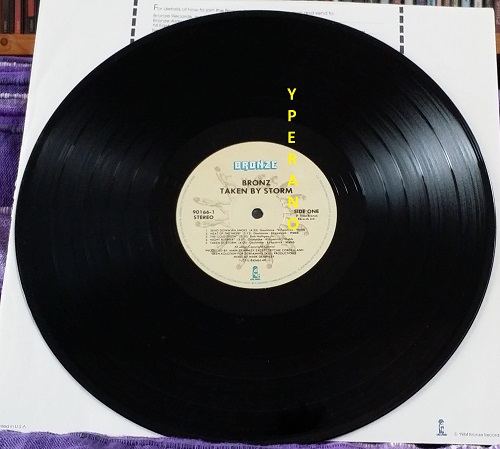 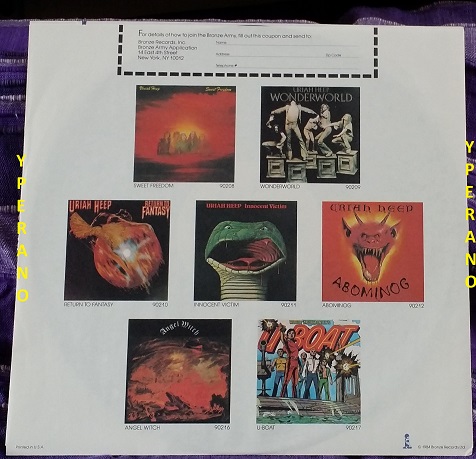 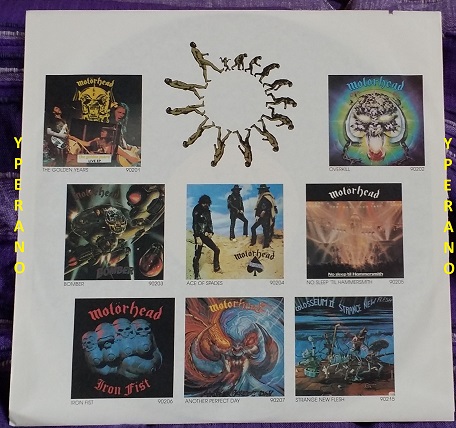 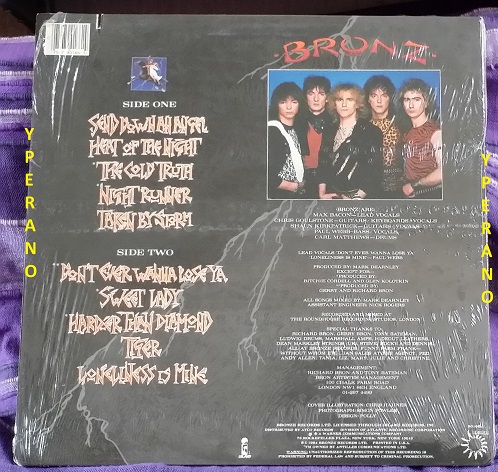 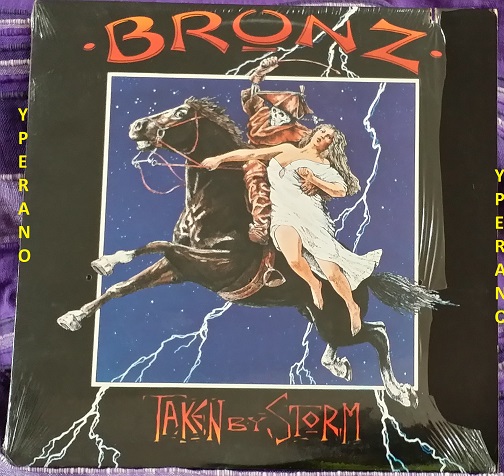 BRONZ: Taken by storm Full-length, Bronze Records 1983
I would describe this as “pop-NWOBHM” in the vein of Tobruk. It has that gigantic, 80s style production, big keyboards and some heaviness. But every song has such well-executed (and loud) pop hooks, all the so-called “glam metal” bands that dominated MTV back in the day pale in comparison.
Each and every song has bombastic, larger than life choruses, with great background vocals (which is something that I always value highly in a band). All kind of gels into a cohesive whole – aided in large part by the production, and everything is competent, this comes recommended. 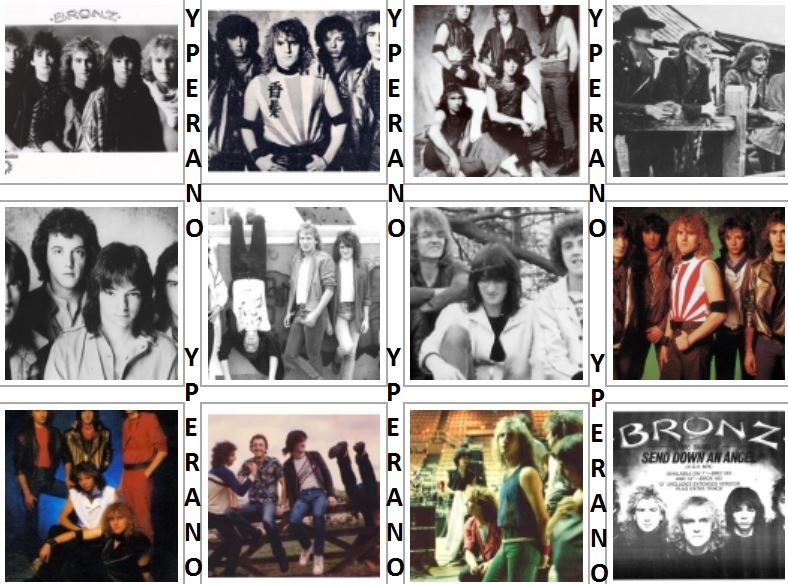 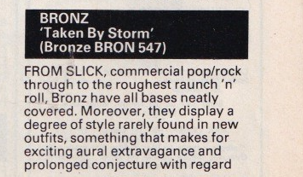 classic aor – the real thing – and a great album – brings back memories.

Superb album this was  excellent. Loved Max on Nightwing and here too.

Bronz were really GOLD with this one should of been PLATINUM Maxs vocal ability was superb to say the least? Should be on any serious music lovers playlist.

What a classic album; was tough to find. If you have heard it then you probably already have it. great choice!

I really liked the Dennis DeYoung type vocals and the songs are great.
“Send Down an Angel” is an incredible song. There are plenty of bright moments along the way.

Fantastic release that stands shoulder-to-shoulder with such classics as Lionheart’s “Hot Tonight” and Orion the Hunter’s lone 1984 effort. Max Bacon’s finest hour and an excellent vehicle for his high-reaching vocals. The brillance of “Send Down an Angel” has only been echoed a few times since this release… notably by bands like Shy, TNT, Masquerade and Steelheart.

Max Bacon is as excellent as ever and ‘Send Down An Angel’ is definately the best song on show. The cover of ‘Don’t Ever Wanna Lose Ya’ is OK too.

SEND DOWN AN ANGEL was a great song,but the one I like the most is TAKEN BY STORM. This LP sounds awesome.

Of the songs, album opener ‘Send Down An Angel’ is a nice piece of pomp, with strutting piano lines and keyboard layers a la Grand Prix. This vein is continued with ‘The Cold Truth’ sounding like very late seventies US AOR. The title track ‘Taken By Storm’ and the New England cover ‘Don’t Ever Wanna Lose Ya’ kick ass.

OOOHH,Wow!!!!!!!!! I have been looking for this LP for two years now, This is definitely worth owning! Very well produced and very original sound, there is no mistaking this BRONZ’s sound. Has been my favorite band since the early 80’s.

Taken by storm and Stranded are the best tracks off this gem of a record. Any real 80’s rock fan won’t hesitate to buy this album. A long awaited album from a brilliant, unique rock band.

I really like the song “Send down an angel”. Great singer.

Wow, no mention of the awesome infectious ‘Harder Than Diamond’? Yes Send Down An Angel is the best song. Harder Than Diamon is right behind it. The Cold Truth is great and so is Taken By Storm. Great Hard Rock/AOR

MAX’S VOCALS SUPERB, AS USUAL. Of course, “Send Down An Angel” is marvelous….but there are a few more diamonds on this album. You can’t deny the quality of the songwriting and the voice of Max Bacon. “Harder Than Diamond” are one of the best tracks on the  LP, along with “Cold Truth” and “Night Runner”.

AOR with some Pomp Rock here and there…tracks 1,3,5,6, & 8 are the ones that i liked the most. Definitely one of my fave AOR, melodic rock albums of all time. Every time I give this a spin, it brings back a bunch of good memories. I love Max Bacon’s voice.

Shaun Kirkpatrick Talks about BRONZ the band in the ’80s:

After an early tie up with Dave Panton as their part-time manager in 1980, the band played many support slots at The Marquee and Music Machine with Angel Witch, More, Diamond Head, and Anvil. The band reappeared in 1983, with Goulstone on guitar and keyboards, Shaun Kirkpatrick on guitar and backing vocals, Clive Deamer on drums, plus Paul Webb on bass guitar and vocals. They were signed to an independent record label, Bronze Records. The band recorded Taken by Storm with Ritchie Cordell and Glen Kolotkin, later helped by Gerry Bron and Mark Dearnly on production.
They were launched onto the US market via a tie-in between Bronze Records and Island. The line-up, then based in London, consisted of ex-Nightwing vocalist Max Bacon, Goulstone, Kirkpatrick, Webb and new drummer Carl Matthews. In 1998, an album of unreleased tracks from that time, entitled Unfinished Business was released.
Following the demise of Bronze Records and original line up in 1984, after a major US tour supporting Ratt, Kirkpatrick assembled a completely new line-up. With producer Max Norman they created their second album, Carried by the Storm, which was recorded in Londons Roundhouse and Power Plant recording studios. The band then comprised Kirkpatrick (guitars / Roland guitar synthesizer), Ian Baker (lead vocals), Mickey O’Donoghue (guitar), Clive Edwards (drums), and Lee Reddings (bass). Guest musicians included Phil Lanzon, Chris Thompson, Stevie Lange, Gary Barnacle and Charlie McCracken. During the final recording and completion of the album, the record label went into receivership, and until 2010 Carried by the Storm remained unreleased. 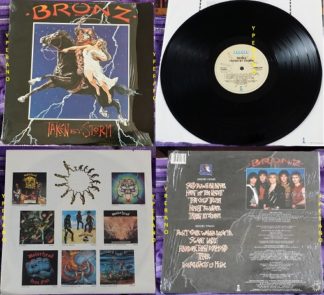