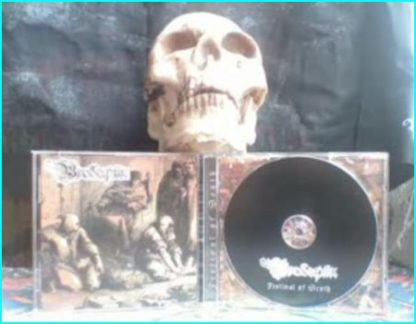 Holy Shit, is this not the most brutal fucking release out there or what!!!! BRODEQUIN’s first CD was just sick, with the vocals of Mike Bailey and the attack from Chad Walls and James Bailey, BRODEQUIN has released a most sickening effort. From the beginning to the end these sickos just waste everything in sight. With “Festival Of Death” I am thinking that all the fans of brutal and sick music will eat this up. “Mazzatello”, “Lake Of The Dead” and “Trial By Ordeal” are just a few of the songs that are brutal!!! BRODEQUIN rules.

I don’t give a shit what idiots say. Brodequin is the best and sickest death grind band around. I mean just listen to the vocals. They are way too sick and brutal. Jamey Bailey is a fucking animal. The drums are way faster then any death grind band I have ever heard before. This drummer is somewhat a king of blast beats. It seems like he never tires out. The guitars are obviously chunky and technical. The beginnings of their songs do tend sound alike some times. The growls get a bit monotonous after some time since they are basically all the same and they don’t vary much. Apart from this they kick ass. I recommend track like “Mazzatello” which is extremely fast whilst “Torches of Nero” has a killer riff in the middle. I must not forget to mention the song “Billes De Rais” for the amazing percussion piece. The production is good and the recording is done in a way to make them sound extremely sick. This CD is fucking great. Two horns up!! 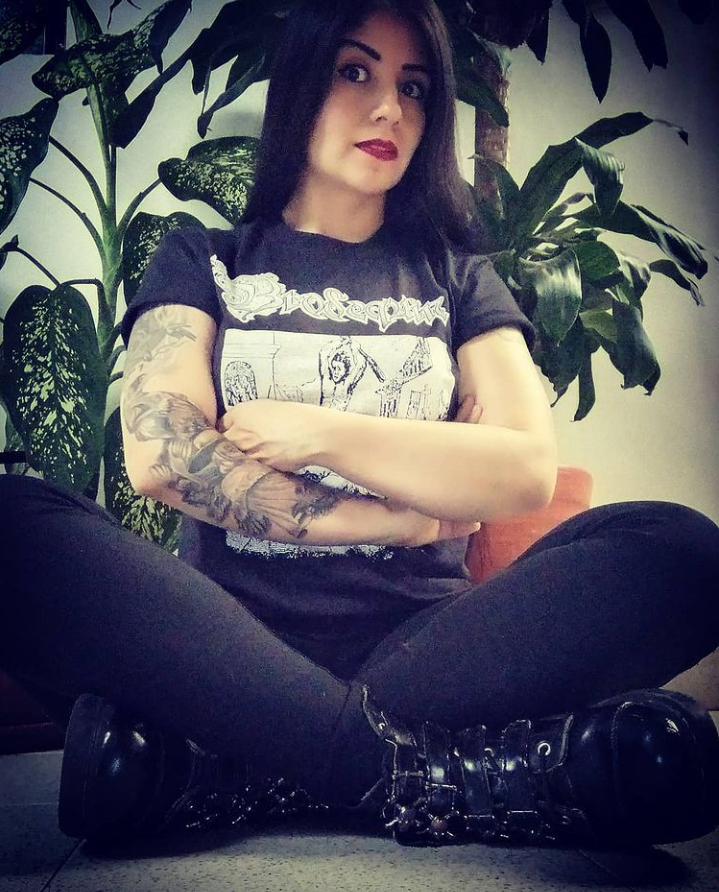 All music and lyrics written and performed by Brodequin

I think people who don’t appreciate this album don’t truly completely love death metal. What is true love if it’s not to keep loving the object of your affection even when it’s displaying it’s ugliest face for all the world to see…Doesn’t mean you can’t like ‘’some’’ death metal and not like this.

Of course there’s always a good dose of brutality in death metal but this pretty much is the essence of brutality itself. I won’t go into clichés or metaphors to describe how brutal this is, you just have to hear it.

First time I heard this album I sat in front of my speakers the whole time, kind of mesmerized, possibly drooling, unable to react to such a powerful onslaught, then played it a few more times. I still can’t do much while listening to this, I just sit there transfixed. I’m not even such a big fan of brutal death metal usually except for some of the classics like Disgorge or Devourment which I enjoy once in a while. Brodequin really hit something different there.

To me the vocals are what keeps this album together and make it so good, Jamie Bailey is some kind of an ungodly beast to emit such a harsh relentless abrasive growl. It doesn’t even sounds like he uses his vocal chords. It’s more like the sound is produced somewhere very dark deep inside his ribcage and then vomited straight up his oesophagus unaltered by a normal human vocal apparatus…a true virtuoso of death metal vocals. And the best thing is there’s no stupid pig squeals or gurgling or any of that fake vocal shit that make me hate a lot of bdm bands. These vocals while being some of the most aggressive ever still retain an earthly organic tone.

Then there’s the drums…they’re fast…This is one of the main critiques about this album. Some say ‘’ this album is shit because it’s way too fast’’. I say ‘’it’s not shit, you just don’t like fast music’’. You can’t be a judge of an extreme genre of music if you don’t know how to appreciate it. It’s like bashing classical or opera without knowing anything about it. I’m not comparing Brodequin with any of the great composers, but you know what I mean. By the way I’m not a big fan of opera but I do consider it extreme music, one of my most intense musical experiences was seeing Carmen at the Bern opera house while backpacking through Europe. I thought I should see something like that once but never thought I would enjoy it this much, made me gain a lot of respect for this genre…Anyway the drums are really intense on this release. Furious blast beating at least 80% of the time and then dry aggressive pounding whiplashing beats. Chad Walls is not only fast but also precise and meticulous listen to his drumming carefully, there is something close to perfection there. But this could all be lost on me if it wasn’t of Bailey’s vocals…I don’t think this album would grab me as much if it was only for the drums.

Guitar is just good kind of old-schoolish pounding riffs played real fast and they are really enjoyable even if they are not the main feature of this album. To those who say you can’t hear the guitar, I just say ‘’ what the fuck’s wrong with your ears’’. The production is actually quite good and the guitar are well mixed in, they’re just not as prominent as on most DM releases, and are not there to play a nice melody but just to nail your face to the ground.

The bass just provides a nice cohesive rumble bounding everything together in a nice solid extremely dense package.

The lyrics are great too, if you care to read them, because they are totally inaudible. They have a certain educational value. You will learn about the most sadistic devices ever invented by Man. Way more efficient at making you feel sick and disturbed than your usual serial-killer/gore-splatter themes. You will also learn about interesting historical figures who suffered horrible deaths like Gilles de Rais… Well written intelligent lyrics, often lacking in this genre.

Needless to say I strongly recommend this (as well as Instruments of torture) to any fan of true death metal. It’s pure brutal bliss.

A Strange and Underrated Album. – 92%

Brodequin is an interesting band, and certainly one that I thoroughly enjoy. ‘Festival of Death’ seems to be a love or hate relationship. Some people seem to like it and think it is quite unique in approach and execution. I am most definitely one of those people. I genuinely enjoy listening to this album, as weird and unconventional as it is.

Now, let’s get the obvious part out of the way, this album is fast. And by fast, I mean faster than what you think is fast. Chad Walls sets the tempo quite high on this album, insanely high to be perfectly accurate. And, honestly, what is wrong with this? Nothing at all, of course. I personally think Chad Walls executes fantastically on this album. I mean, to me, ‘Festival of Death’ is almost a concept album. Not exactly a concept of story or lyrical themes, but of production and approach. I believe this is exactly what they wanted to make, basically speed Death Metal with a focus on drumming.

For the reviewers that say they can’t hear the guitar riffing, I say to you…uh what? I’m listening to this album as we speak on some shitty earbuds (the standard iPod issue) and I can hear everything that the guitars are doing. Now, this isn’t to say that the guitars aren’t lowered in the mix, because they certainly are, but so what? I can still hear them and to be honest, I find them to be a highlight of this album. As for how the guitar riffing sounds on this album, they basically move along quickly with a deep muddy sound. The guitars do sound quite a bit muddy indeed, but this doesn’t inhibit your ability to distinguish the guitar riffs. Regardless, I think it was exactly their intention to have the guitar riffing low and subtle in some parts, and in fact, there are many parts that give a very catchy and melodic vibe, if you listen closely. They throw in a lot of squeals and even some solo sounding sections for variety.

Continuing on with the drumming, I have to say that I find them to drive the music forward. Chad Walls appears to be the lead almost, and he does throw in some interesting fills and rolls. However, the majority of the album he is blasting away, at lightning speed. It is quite impressive how fast his blasts are. There is actually a live video of him playing “Torches of Nero” (on Youtube) and it is really neat to watch. He is blasting so fast that he is making the hi-hat produce a ringing sound. I guess drummers can appreciate this more so, and Chad Walls does happen to be one of my favorite drummers.

‘Festival of Death’ is a fairly short album, clocking in at nearly 31 minutes. However, it zooms by about as fast as Chad Walls is drumming, and it never gets boring. The guitar riffing is varied enough to be interesting throughout. I believe the production on this album was deliberate, like it or not. I suppose it certainly isn’t for everyone, which would explain some of the negative reviews. However, don’t let that discourage you from trying out this album, because you might actually really like this album once you become familiar with it.

As for the vocals, they are quite interesting and innovative. I haven’t heard a voice quite like Jamie Bailey before. His vocals are basically an inhaling whirlwind of sound, and fit well with the overall atmosphere of the album. In fact, they actually are able to create a bit of atmosphere to go along with the down-tuned muddy *nearly* incomprehensible (at times) guitar riffing.

I think some people may need to let this album grow on them for a time before they give a final verdict, because it is very unconventional and may take people by surprise. After several listens it really starts to become clearer exactly what Brodequin is trying to do with this album. I believe they were trying to create an album that is focused more on drumming and make the guitar work a little bit more subtle, and it is nice to see a band trying to throw in a little bit of innovation, isn’t it? To be honest, Brodequin is a pretty unique band in general anyway, and ‘Festival of Death’ is a great display of this.

Overall, this album is a pleasure to listen to, in a strange kind of way. I don’t find the album to be all that intense, but it certainly is brutal. ‘Festival of Death’ is a very uneasy speed induced album that has a lot of strange riffing and a very gifted and unique vocalist. I believe this album is underrated and gets a lot of criticism for the wrong reasons.

Standout Tracks: “Trial by Ordeal”, “Torches of Nero”, “Lake of the Dead”, “Flow of Maggots”. 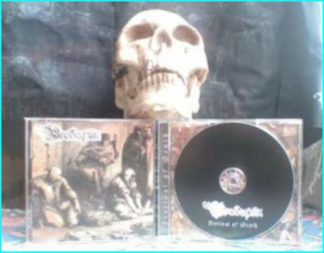