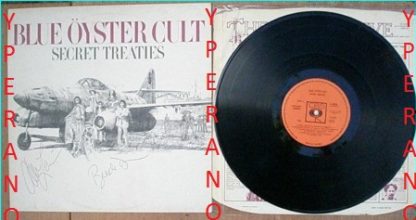 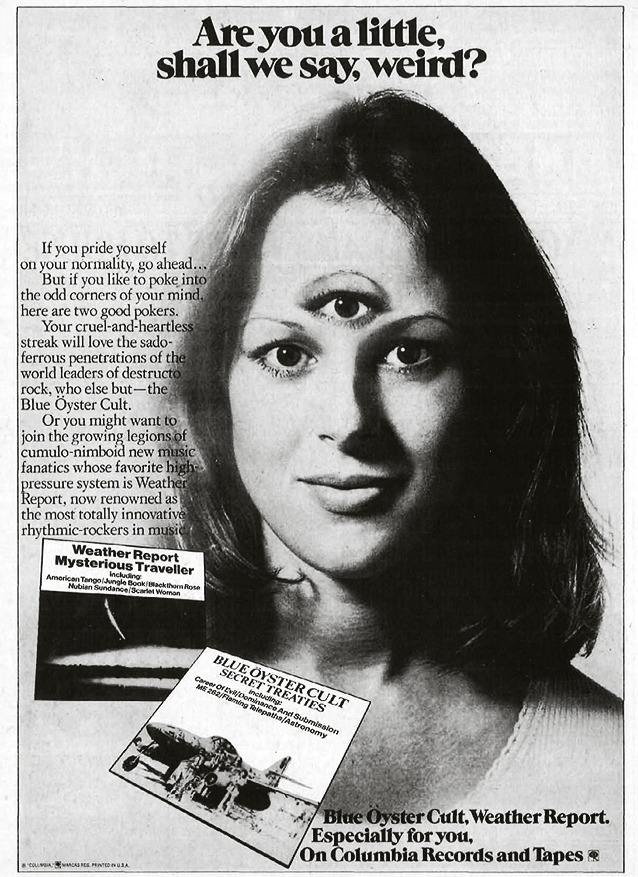 One of the greatest early metal albums. Period. Why? The songs, culled from the bizarre Bouchard/Pearlman “”Imaginos”” song cycle concept, flow into each other to form a demented, horrifying stream of consciousness approach. This creepy approach has undoubtedly influenced later bands in the genre. The songs themselves are eclectic and tight, from the straightforward heavy guitar riffs of “”Career of Evil”” to the proto-punk of “”Dominance and Submission””, and the downright chilling epic, keyboard-heavy ballad “”Astronomy”” (later covered by Metallica). Buck Dharma signature guitar soloing approach finally fully materialises on this album, and the keyboard arrangements show that non-guitar melodic instrumentation can be vital in creating moods, even in heavy metal. Besides, “”Harvester of Eyes”” has a superb guitar harmony line. Even the album packaging rules. This is an essential Blue Oyster Cult album. And that that. Original vinyl copy. SIGNED.

Secret Treaties is Blue oyster Cult third studio album, released in 1974. Without question blue oyster cults best album…
In 1975, a Melody Maker poll of critics voted Secret Treaties as the “”Top Rock Album of All Time.”” The album spent 14 weeks in the US charts, peaking at #53. It went gold in 1992.
The cover depicts the band standing beside and sitting on a German Me 262; this scene is inspired by the song of the same name

Side one:
“”Career of Evil“” (Albert Bouchard, Patti Smith) – 3:59 ‘Career of Evil’ kicks off Blue Oyster Cult’s third LP in supreme fashion. Co-written by drummer Albert Bouchard and Patti Smith (who was dating keyboardist Allen Lanier at the time), the song adds a certain amount of polish -to great effect- to the band’s mix. The lyrics are awesome too: “I’d like your blue-eyed horseshoe, I’d like your emerald horny toad, I’d like to do it to your daughter on a dirt road.” ‘Career of Evil’ sets the tone for the entire album, and it’s killer.
“”Subhuman“” (Eric Bloom, Sandy Pearlman) – 4:39
“”Dominance and Submission“” (A. Bouchard, Bloom, Pearlman) – 5:23
“”ME 262“” (Bloom, Donald Roeser, Pearlman) – 4:48 “Goering’s on the phone from Freiburg / Said ‘Willie’s done quite a job’ / Hitler’s on the phone from Berlin / Says ‘I’m gonna make you a star’.” So begins Blue Oyster Cult’s song about the German fighter plane used in World War II, which was capable of flying 120 miles per hour faster than the U.S.’ top aircraft. It’s one of the most fiercely rocking songs in the band’s catalogue, boasting almost as much firepower as the track’s subject. 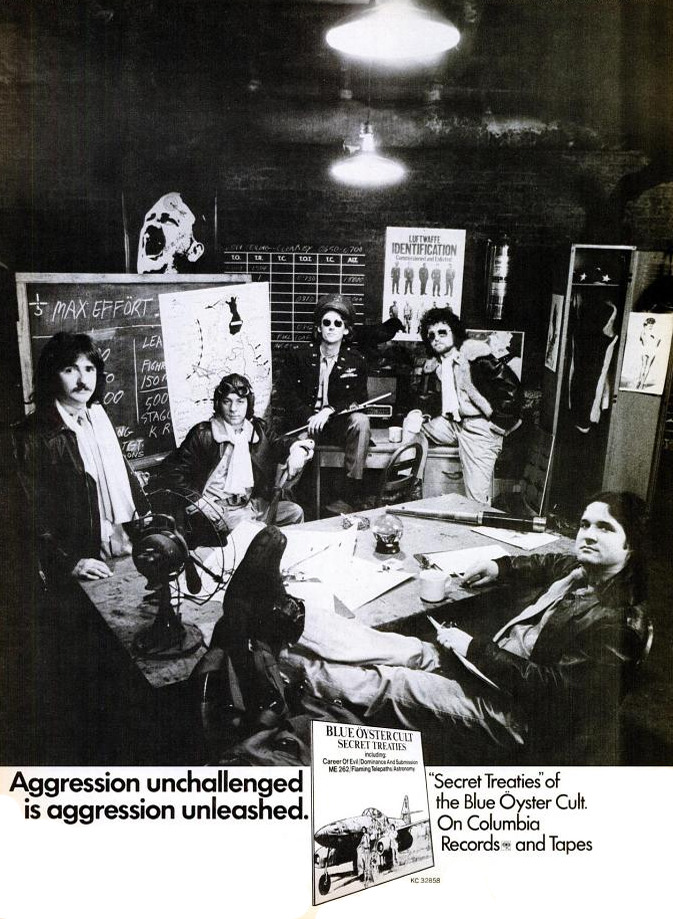 “Secret Treaties” is one of the all-time great hard rock records. What do you recall about the making of that record?

It was an interesting time because we were accelerating in popularity, working a lot, and the songs had to be written between touring. We had the band house in eastern Long Island and I was the only one living there and the band would come in and rehearse in the living room. When the band would leave I had a whole household full of instruments just lying there, including the upright piano. It was just a fertile time to be writing and coming up with stuff.

Is that your favorite BOC album?

I’d say it is. We certainly lean on that record a lot for our live show. 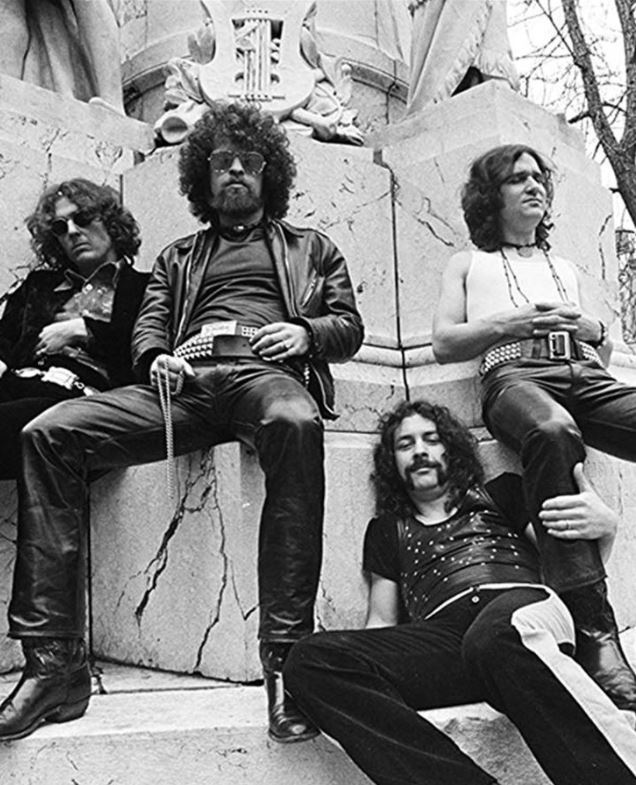 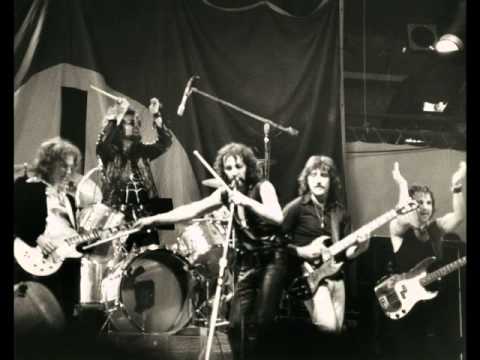 While the speed-freak adrenaline heaviness and shrouded occult mystery of Tyranny and Mutation is the watermark for Blue oyster Cult creative invention, it is Secret Treaties that is widely and critically regarded as the band classic. Issued in 1974, Secret Treaties is the purest distillation of all of BoC strengths. Here the songs are expansive, and lush in their textures. The flamboyance is all here, and so are the overdriven guitar riffs provided by Buck Dharma and Eric Bloom. But there is something else, textually, that moves these songs out from the blackness and into the shadows. Perhaps it the bottom-heavy mix by producer and lyricist Sandy Pearlman, with Allen Lanier electric piano and Joe Bouchard bass coming to rest in an uneasy balance with the twin-guitar attack. Perhaps it in the tautness of songwriting and instrumental architectures created by drummer Albert Bouchard, Bloom, and Don Roeser (Buck Dharma). Whatever it is, it offers the Cult a new depth and breadth. While elements of psychedelia have always been a part of the band sound, it was always enfolded in proto-metal heaviness and biker boogie. Here, BoC created their own brand of heavy psychedelic noir to diversify their considerably aggressive attack. Listen to “”Subhuman”” or “”Dominance and Submission.”” Their minor chord flourishes and multi-tracked layered guitars and Bouchard constantly shimmering cymbals and snare work (he is the most underrated drummer in rock history) and elliptical lyrics – that Pearlman put out in front of the mix for a change – added to the fathomless dread and mystery at the heart of the music. Elsewhere, on “”Cagey Cretins”” and “”Harvester of Eyes”” (both with lyrics by critic Richard Meltzer), the razor-wire guitar riffs were underscored by Lanier organ, and their sci-fi urgency heightened by vocal harmonies. But it is on “”Flaming Telepaths,”” with its single-chord hypnotic piano line that brings the lyric “”Well, I’ve opened up my veins too many times/And the poison in my heart in my heart and in my mind/Poison in my bloodstream/Poison in my pride/I’m after rebellion/I’ll settle for lives/Is it any wonder that my mind is on fire?”” down into the maelstrom and wreaks havoc on the listener. It a stunner, full of crossing guitar lines and an insistent, demanding rhythmic throb. The set closes with the quark strangeness of “”Astronomy,”” full of melancholy, dread, and loss that leaves the listener unsettled and in an entirely new terrain, having travelled a long way from the boasting rockery of “”Career of Evil”” that began the journey. It a breathless rock monolith that is all dark delight and sinister pleasure.

Metallica covered the song for their 1998 Garage Inc. album.

Albert Bouchard Drums, lead vocals: Lars told me that his first rock concert was BOC in Copenhagen. His father took him. I remember a horrible show but he remembers it fondly. Just goes to illustrate that whenever you play a show you never know who in the audience might see in in a whole different light. We did play Astronomy that night. 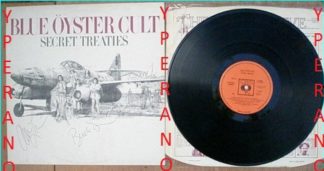