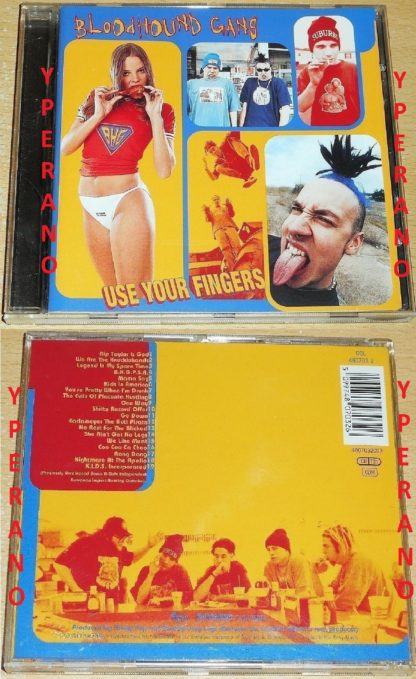 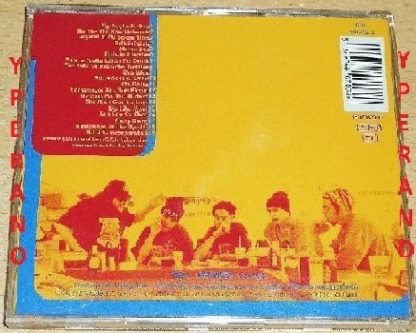 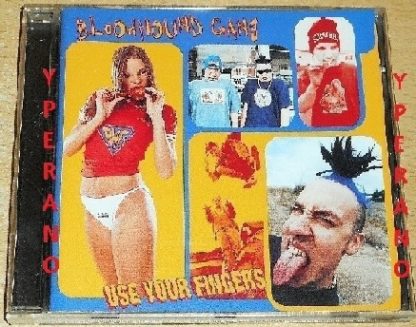 BLOODHOUND GANG: Use your fingers CD. 20 songs, incl. a Kim Wilde cover. THE most cheerful music Check video + all samples. 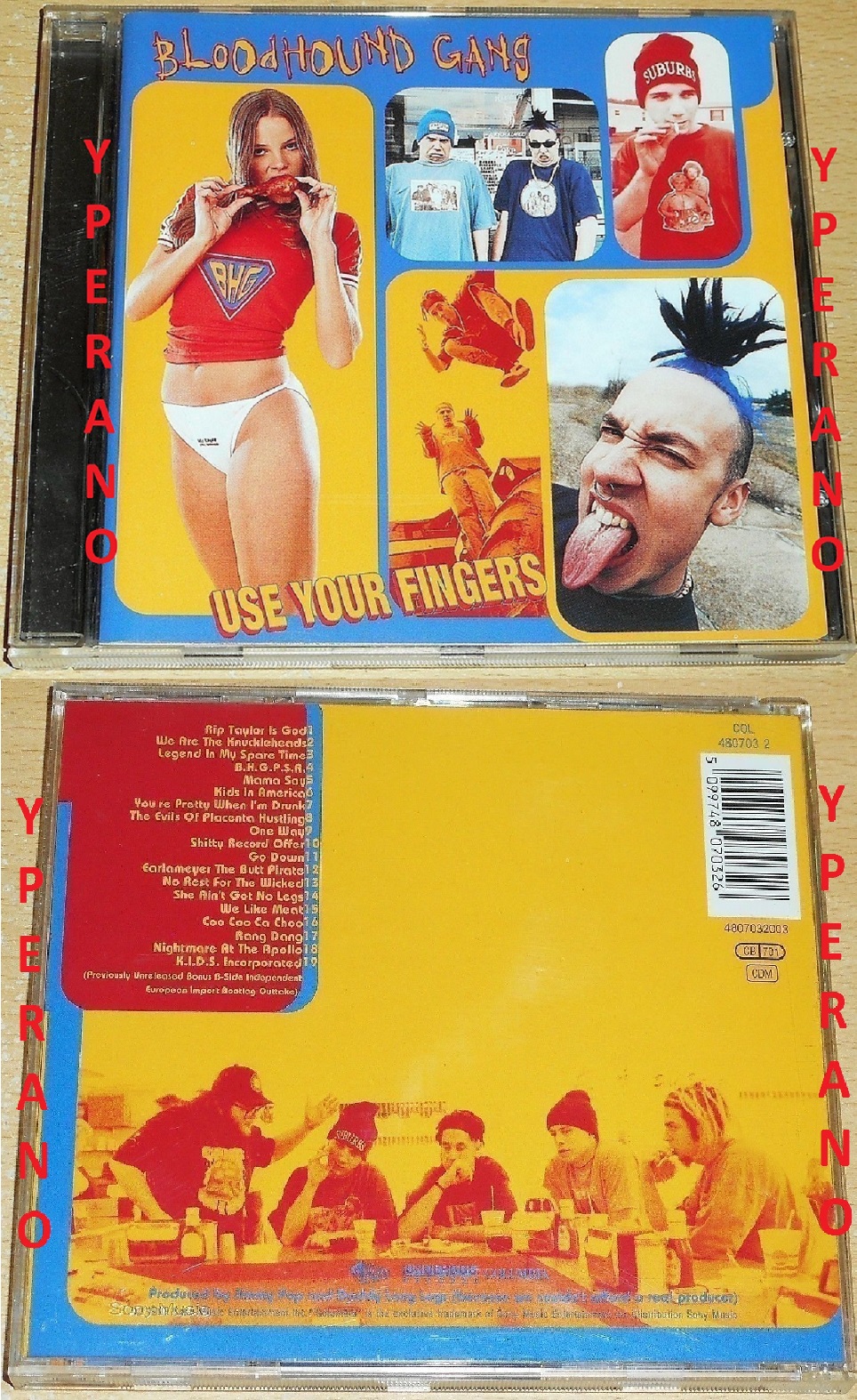 Samples:
“Legend in My Spare Time” – “Do What You Want to Do” by T-Connection
“Mama Say” – “Goodhumor Man” by Blue Mitchell and “Save a Prayer” by Duran Duran
“One Way” – “Boogie Shoes” by KC & The Sunshine Band and “Theme from Sanford & Son” by Quincy Jones
“We Like Meat” – Quote taken from 1953 film Stalag 17
“Rang Dang” – “White Lines” by Grandmaster Flash and “Not to Touch the Earth” by the Doors
“One Way” contains a sample from “Theme From Sanford & Son,” and initially, according to the bands website prior to 2004, resulted in a cease and desist from Quincy Jones (it was ultimately resolved – Jones received co-writing credit, and the song remains on the album).
“She Ain’t Got No Legs” originally contained a sample from The Cure, but frontman Robert Smith refused to grant permission.
“Coo Coo Ca Choo” originally contained a sample from “Sunshine of Your Love” by Cream, but guitarist Eric Clapton refused permission, so had to be replaced with a live guitar part (played by Lüpüs Thünder).

Trivia:
“Kids In America”, on the album, is sung by someone completely unrelated to the band. This is Rob Vitale from the band Black Train Jack.
The song “You’re Pretty When I’m Drunk” is sung a cappella.
The “obnoxious model-beating lead vocalist of a certain chart-topping heavy metal glam rock band” alluded to in “Shitty Record Offer” is a parody of Axl Rose.
The band has described the album as “the one that resulted in the most cease and desist orders in the bands history.”

White rappers generally divide into two camps: the Beastie Boys disciples and the House of Pain clique. For the former, honky hip-hop has nothing to do with the African-American experiences that gave birth to the rap form; rather, it is borrowed to express the middle-class, often suburban, ennui that comes from too much pop culture and too much time on ones hands. In the latter, groups attempt to co-opt the Afrocentrism and identity worship from black rap and use it as a template for their own particular ethnic trumpeting–Irish, in HOPs case. On their debut album, Use Your Fingers, Bloodhound Gang make it clear which group they expect to be confused with: “No, I’m not the guy from the Beastie Boys!” yells Jimmy Pop (or is it his partner Daddy Long Legs?). Hailing from suburban Philadelphia, BG are a self-contained frat party dying to offend anyone who’ll listen with their often hilarious, in-your-face political incorrectness. They fight for their right to be moronic throughout–whether worshiping Rip Taylor or invoking the Cavity Creeps from an old toothpaste ad. Its not all just fat-chick and cripple jokes, though: BG back up their obnoxious idiocy with some fairly wise musical maneuvering. While their age and background lead them to repeatedly mine the ’80s for material–Duran Duran and Cure samples, Michael Jackson and Blondie interpolations, a “Kids in America” cover–their sly comments and ingenious a cappella snippets prove they’re surprisingly sharp and able lads.

5.0 out of 5 stars Wow! Amazing! Definitely 5-star material.,
This album is absolutely amazing. It truly does put “Hooray for Boobies,” which is a great CD, to shame. eware, trendy MTV-watchers, as this CD will probably not appeal to those who simply ride the wave of trends going on. “The Bad Touch” is a great song, but don’t buy this album expecting every Bloodhound Gang song to sound like it. This album boasts such great cuts as “We Are The Knuckleheads,” “Legend In My Spare Time,” “Mama Say,” “One Way,” and “You’re Pretty When I’m Drunk.” If you consider yourself open to all forms of music and not expecting a poppy MTV album, buy it. Go!

5.0 out of 5 stars The funniest one of the bunch…,
‘Bloodhound Gang is here to get it on, so rock on brothers, rock on’.

Be the first to review “BLOODHOUND GANG: Use your fingers CD. 20 songs, incl. a Kim Wilde cover. THE most cheerful music Check video + all samples.” Cancel reply 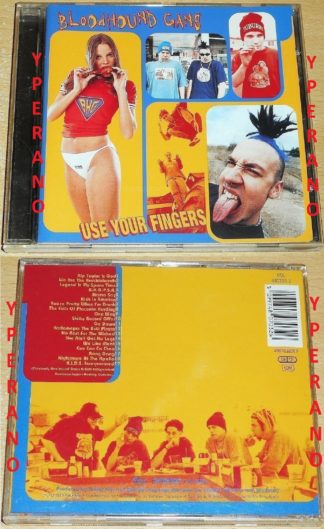 You're viewing: BLOODHOUND GANG: Use your fingers CD. 20 songs, incl. a Kim Wilde cover. THE most cheerful music Check video + all samples. £3.00
Add to basket