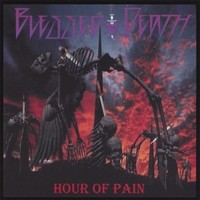 BLESSED DEATH arrived on the metal scene in the 1984. They released their debut album KILL OR BE KILLED in 1985 (currently out of print) which featured their own unique blend of heavy speed, power, death and destruction. The album quickly gained a lot of attention among the underground scene, especially in Europe. It has grown to be an 80s thrash metal classic featuring a song that has become somewhat of a legend and metal anthem Knights of Old Bridge.
Two years later BLESSED DEATH released their second album DESTINED FOR EXTINCTION in 1987 (also currently out of print). This album took on a much more extreme and aggressive direction than the first, featuring an all out onslaught of furious thrash speed metal while still retaining their signature heavy doom laden edge.
From Plasmatzees Blessed Death web page: One of the fastest and heaviest albums of all time, and what’s best, the band did not forget to include a good portion of melody (not a contradiction!) while making full use of my beloved guitar solo battles between the left and the right channel. The perfect combination of heaviness, speed, melody, doom, death, and an ever present atmosphere.
BLESSED DEATHs’ unique and original approach to metal was a result of a broad range of influences, from Black Sabbath, Pink Floyd, Led Zeppelin and Deep Purple to Judas Priest, MotorHead, Slayer, Merciful Fate, Voivod and Celtic Frost.
Dueling guitar solos at lightning fast speeds, a rock crushing rhythm section, haunting harmonies, vicious vocals with earth shattering screams, combined with a very PISSED OFF attitude, made up for a sound like no other, with a rage that rips through your soul.
BLESSED DEATHs latest release HOUR OF PAIN was actually recorded back in 1991. They disbanded shortly thereafter in 1992, and as a result of their departure, along with other problems, the recording was never released. 15 years later, after an ever growing demand from emails and message board posts, the band decided to independently release their final work.
HOUR OF PAIN is a true to life representation of what the band was experiencing and feeling at that point in their lives. The collapse of the Berlin Wall, the growing threat of terrorism, war, Earths’ destiny as a result of mankind’s wasteful and destructive nature, the rising population of phoney people with delusional self-centered notions of what life is about, and a general discontent for modern society.
The material on HOUR OF PAIN portrays a more confident and refined writing style. It truly reflects all of the bands’ musical influences without compromising their originality or heavy dark and aggressive sound. The first half of the album showcases slower and more melodic tracks that progress into a complete barrage of furious and relentless thrash tunes. Whether you’re into speed, thrash, power, alternative, progressive, death, goth, black, doom, whatever, there is something in this album that everyone can connect with.
reviews

I’m not really sure what happened to Blessed Death in the late 80’s, I know a lot of people expected even greater things after ‘Destined for Extinction’ and it just never happened, now finally it has!!

‘Destined for Extinction’ has to be one of the greatest metal albums of the late 80’s, thrash with doom laden riffs, there really is nothing that compares…perhaps Carnivore would be close (another of my late 80’s favs) but they are more hardcore crossover.