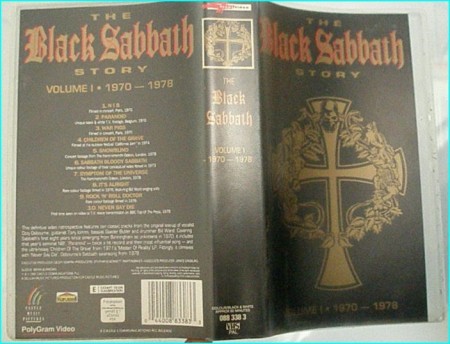 Of all the Black Sabbath material I have seen, heard, or experienced in my lifetime of experiencing Black Sabbath videos, cds, clips, etc. this video has to be my favorite. I prefer the Dio years to the Ozzy years, but the reason why I love this video so much is due to the attention given to Bill Ward and Geezer Butler – Geezer in the interviews, and Bill Ward in the video clips and segments. You can really get a feel for both of their playing and for their immense musical prowess (as if that was ever an issue). In short, this video exemplifies the two members of the band that, in my opinion get the smallest amount of attention yet deserve the greatest amount of attention.

There is some truly golden footage here. The conceptual video for “Sabbath, Bloody Sabbath” is hilarious due to Ozzys facial expressing during cutaway segments of the video. Also, Ozzys dancing in War Pigs is also worth seeing for the laugh but as comedic as the videos are, it is important to remember that this video is as much of a sociological and historical account of the early Sabbath years and the culture at that time as it is a documentation of Sabbaths early material. I do laugh at times at the video, its hard not to sometimes with Ozzys stage clothing seemingly borrowed from the nearest hippy-cowboy store – at times I wouldn’t be surprised to see Geezer or Iommi or Ozzy riding a tie-die pony onto stage – though the magnitude of each song presented always makes me stifle my laughter and bow down to such masterful progenitors.

Amongst the classic footage of War Pigs and the unbelievably classic footage of Paranoid are videos of Bill Ward singing solo accompanied by Geezer Butler on bass (Its Alright) and a decisively rock and roll song way different from what we are normally used to hearing from the Birmingham godfathers (Rock N Roll Doctor). These two songs reveal a much more expansive and varied ability on the part of Black Sabbath. Though Iommi has always had a certain talent for the blues – most evident on the debut – Rock N Roll Doctor shows him in top form years later.

The quality of the videos is excellent. The sound quality on each song is strong. None of the videos are bootleg recordings or difficult to hear. “Children of the Grave” gets my vote for poorest quality though the footage is incredible. A sea of fans, elated to see the band shot from the back of the stage above the drums occupies a large portion of the video though my favorite shot is of Ozzy removing his tasseled shirt and throwing it into the audience – it makes me wonder if that shirt still exists somewhere, a fragment of musical history lost to the years.

Between each of the ten tracks are interviews with Iommi and Butler which provide context and anecdotes for the songs, moments in time, and Black Sabbath story. These interviews show both men in as professionals artists and, most importantly, simple good friends.

Sabbath goes to video, hilarity ensues
I found two things… The first was that Black Sabbaths music videos were hilarious, and the second was that the rare live footage on here was purely amazing.

We first get to see a live rendition of NIB (a song that, by this point, I’m sure NONE of us are sick of… right). Now, this song sounds great on the album but LIVE… well, it sounds great, because they played it almost directly from the album, solos and all. Not always great, but it fits here. Then we get to hear some alternating interview clips from Tony and Geezer. These are gold, because they tell some nice little anecdotes about the heyday in Sabbath, featuring a quip about Tony Iommi fried on hash, and trying to play a flute in front of a huge audience in concert… without putting it up to his lips.

Back to the video… There are two videos worth mentioning on here, that are not live, but were music videos. The first is Paranoid, and if you haven’t seen it yet RUN! NOW! Because its one of the most essential 70s videos in the history of 70s videos. We’ve got psychedelic wheels spinning in the walls, we have cameras zooming in and out at an alarming, and we got four band members wearing bellbottoms… genius. The second is Sabbath, Bloody Sabbath, and thats one for the books. Just watch it, you’ll know what I mean.

Anyway, focusing more on the music available… the live tracks are great, a real treat, and my favorite comes on next. War Pigs, with some of the original lyrics still intact. Alot of people aren’t cognizant of the fact that Ozzy used to sing the song about witches and black masses instead of making a slight allusion to such subject matter. Here it seems like hes improvising and can’t decide which to focus on… still a great video.

The last high point I will focus on is the song Snowblind… a live version of this song is always a treat, but to see them stumbling about the stage, Ozzy smiling and clapping all the while, yelling cocaine… man its good.

All in all its a great video. To the Black Sabbath pack-rat its a definite must, but due to its rarity. 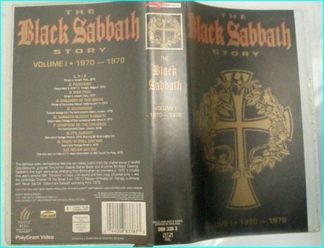