Check the video above 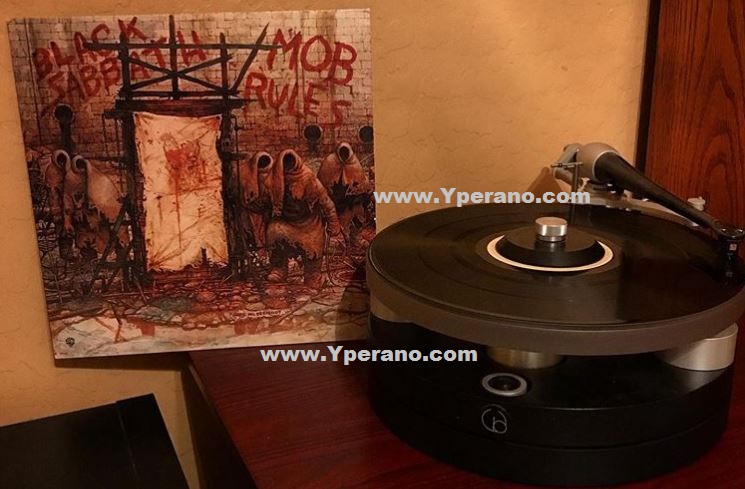 B1 Country Girl
B2 Slipping Away
B3 Falling Off The Edge Of The World
B4 Over And Over
Playing time: 40 min

Black Sabbath had put itself back on track both musically and commercially with the 1980 album HEAVEN AND HELL, as the addition of new vocalist Ronnie James Dio was the shot in the arm Sabbath needed. A follow-up was released one year later, MOB RULES, which follows in the same mega-decibel approach as its predecessor. While it is still a vast improvement over Sabbath final two albums with Ozzy Osbourne (1976 TECHNICAL ECSTASY and 1978 NEVER SAY DIE), it doesn’t exactly match the inspired performances and top compositions featured on HEAVEN AND HELL.
The opening track, “”Turn Up the Night,”” kicks off the album with a jolt of electricity, while other hard rocking highlights include the mid-paced “”Voodoo”” and the raging title track–the latter would be featured on the soundtrack to the cult animated movie, HEAVY METAL. Another standout was the near eight-minute epic “”The Sign of the Southern Cross,”” which starts as a gentle acoustic composition, before transforming into a classic slice of plodding Sabbath metal. Although Dio had been a major factor in returning Sabbath back from the dead, he would leave the group under less than amicable circumstances after the release of the 1982 live album LIVE EVIL.
=========================================================
“”Mob Rules”” is Black Sabbath´s tenth studio album, released in November 1981.
In the UK, it became the fourth Black Sabbath studio-album to attain Silver certification (60,000 units sold) by the British Phonographic Industry, achieving this in February 1982.

It was the first album to feature Vinny Appice on drums, who had replaced original member Bill Ward in the middle of the tour in support of the previous year “”Heaven an Hell””.

The cover art is a modified version of artist Greg Hildebrandt´s piece entitled “”Dream 1: Crucifiers”” from 1971, with Black Sabbath licensing its use for the cover of “”Mob Rules””. The original artwork has been augmented for the album, where not only have the band and album names been conspicuously added to the back wall, but also the hook hanging on the left side of the structure was changed to a crucifix, and the stain in the middle of the structure has been altered to resemble a devil head. Lastly, Greg Hildebrandt name has been added to the bottom center of the piece, as the original was rectangular in shape with the artist name & year in the lower left corner, thus being truncated in the album square presentation.
The lyrical themes are dark, notably on tracks such as “”The Sign of the Southern Cross”” and “”Falling Off the Edge of the World””.

Notes:
E5150 and Mob Rules from this album also appear on the soundtrack to the movie Heavy Metal with a slightly different mix.

“We were all going through a lot of problems at that time, most of it related to drugs,” Toni Iommi told Guitar World, recalling the recording sessions for the band’s 1981 album Mob Rules. “Even the producer, Martin Birch, was having drug problems, and it hurt the sound of that record. Once that happens to your producer, you’re really screwed.”

Screwed or not, Mob Rules has generally been compared unfavourably with its predecessor, Heaven And Hell. Original Sabbath drummer Bill Ward had departed, Vinny Appice had replaced him, but he wasn’t going to stay for long: Appice and singer Ronnie James Dio would move on after disagreements the following year about the Live Evil album, hooking up to form Dio.

Sabbath’s second album with Ronnie James Dio was also the first album the band recorded without Bill Ward, who quit during their 1980 tour. But his replacement, Vinny Appice, was solid enough, if lacking some of Ward’s flair. The album’s centerpiece is Sign Of The Southern Cross, a seven-minute epic in which the power of Iommi’s funereal riff is matched by the mystique of Dio’s lyrics. Four other songs are genuine classics: Voodoo, Turn Up The Night, the belligerent title track, and the thundering, apocalyptic Falling Off The Edge Of The World. But never again would Black Sabbath and Ronnie James Dio reach such heights together.

Other albums released in November 1981: Re-ac-tor by Neil Young and Crazy Horse, Shake It Up by The Cars, Diary of a Madman by Ozzy Osbourne, Music from “The Elder” by Kiss, Too Fast for Love by Mötley Crüe, Till Deaf Do Us Part by Slade, Renegade by Thin Lizzy, I Love Rock ‘n’ Roll by Joan Jett & the Blackhearts, For Those About to Rock We Salute You by AC/DC, Bad Religion by Bad Religion, Prince Charming by Adam and the Ants and Take No Prisoners by Molly Hatchet.

Martin Birch’s production is spot on – as usual. The feel of the album is raw, live and direct, which was exactly right for the time. If you consider that we were on the verge of a major breakthrough in the way heavy metal was to be defined, with bands like Iron Maiden making their impact and Metallica about to get going, then Mob Rules is exactly what Sabbath should have been doing at this point. Listen to it now; it stands up really well up against anything you hear today. The vibe of the record was so well-balanced.

For me, there are three stand-out songs on Mob Rules: Turn Up The Night, which had the same feel as Neon Knights from Heaven And Hell; Falling Off The Edge Of The World; and Sign Of The Southern Cross– all Sabbath classics.

Mob Rules is the best album Black Sabbath made with Ronnie Dio, ahead of both Heaven And Hall and Dehumanizer. It set a standard that Dio himself tried to emulate when he left Sabbath and made the Holy Diver record – which in a way was the natural successor to Mob Rules. (Andy Sneap: producer, Judas Priest live guitarist)

It isn’t easy to figure out exactly who deserves the blame for this sludgefest. Dio’s lyrics are insipid and clichéd, but since the vocals are usually buried in the mix, that’s only a minor annoyance. His bass rumbling like an overloaded truck, Geezer Butler is busy, busy, busy. But not quite as busy as guitarist Tony Iommi, who uses the album as an opportunity to demonstrate how swiftly he can play. (In case you’re wondering, he’s quicker than Mark Farner, not as quick as Johnny Ramone.) As for the new kid on the block, drummer Vinnie [sic] Appice, his thumping is so leaden and uninspired you have to listen twice to notice him. (Rolling Stone)

Mob Rules is a magnificent record, with the only serious problem being the sequencing of the material, which mirrors Heaven and Hell‘s almost to a tee. In that light, one can’t help but compare otherwise compelling tracks like Turn Up the Night and Voodoo to their more impressive Heaven and Hell counterparts, Neon Knightsand Children of the Sea. That streak is soon snapped, first by the unbelievably heavy seven-minute epic The Sign of the Southern Cross, which delivers one of the album’s best moments, then its segue into an unconventional synthesizer-driven instrumental (E5150) and the appearance of the roaring title track. (AllMusic)

Dio Sabbath sounds remarkably different than Osbourne Sabbath, musically and obviously vocally. The fact that these are two different bands is clearly evident on the second side of Mob Rules. Opening with “Country Girl” and sliding into “Slipping Away”, the songs carry with them far more influence from Dio’’s lyrics and presence than either Iommi or Butler’s musical contributions. “Falling Off the Edge of the World” begins like a typical Dio effort but by the song’s climax has achieved a level comparable to that of earlier Sabbath numbers blended with the influence of Birch’’s work with Maiden. (Consequence Of Sound)

Michael Knoop: Love this album. Such a sinister and heavy vibe. I get a metal boner every time Sign Of The Southern Cross blows out about 75 seconds in. Same thing with Falling Off the Edge Of The World. Vinnie Appice is an absolute monster on the title track. Voodoo, Country Girl and Slipping Away are all great album cuts. Even the instrumental interlude E5150 sounds sinister.

Hai Kixmiller: How does it stand up today? Hmm, I think it’s a prime example of what was and is NWOBHM. Hard driving, fist pumping, guitar riffs. Songs about myths, occult, fantasy, horror. It’s great catchy metal music that headbangers still pass on to the young blood and say, “listen to this, raise your swill and devil horns and prepare to have your eyes opened and mind blown!”

Gary Claydon: Loses little, if anything, in comparison to Heaven And Hell which itself holds its own with anything done by any Sabbath line-up. Simply a great rock album. Sign of the Southern Cross, Slipping Away, Falling Off The Edge of the World and the mighty Voodoo are all stone cold classics.

Bob Zelenka: A metal classic for sure.While not on the level as Heaven And Hell, but still some of the all time best Dio sung songs. Sign of the Southern Cross, Mob Rules, and the criminally underrated Turn Up The Night! Overall still one of the great rock/metal albums of the 80s.

Pete Mineau: I’ve always been an Ozzy era fan of Sabbath. Even the weakest albums by them during that period had that “classic Sabbath sound”. In my opinion, Mob Rules, which is a very listenable album, has a “Rainbow-lite sound”. I say “lite” because, even though Tony Iommi is an incredible guitarist with a style all his own, he lacks the chops of Ritchie Blackmore.

Jim Linning: I can’t find a weakness and what seals the deal for me is that it comes in at exactly 40 minutes so there is no wasted space – every second is vital with no unnecessary noodling or fannying around. The production is also pin-sharp, preserving the power of Tony Iommi’s riffs, the precision of Appice’s drums, the thud of Geezer’s bass and possibly most importantly the clarity of RJD’s voice. Quite stunning really.

James Utvandraren: It’s an album with well-crafted songs that all flow together very nicely. I know that Tony Iommi has said many times that he switched around his songwriting approach for this version of Sabbath, as Dio’s voice and melodic intelligence could effortlessly carry over whatever riffs Iommi put together. He didn’t have to double Ozzy’s voice with his guitar riffs any longer to get the melody across. It shows on here, and is also perhaps why most die hard old school Sabbath fans may have a problem with the new sound, first on Heaven and Hell and then on Mob Rules. The songwriting is more mature and incorporates a greater extent of varied riff changes and melodic arrangements. The addition of Vinny Appice on drums kicked up the energy level a bit from Ward’s shuffles and the whole band sounds amazing. I know they were falling apart during this time, but I honestly can’t hear that on this recording.

To me, Sabbath was always at their best with their darker ambient numbers. I absolutely love Falling off the Edge of the World as it showcases that Sabbath atmosphere, with heavy riffs and ominous clouds on the horizon. Over and Over closes the album, and the Dio-era, with a slower number that perfectly walks the band towards that crossroads that sent them down two different paths afterwards: Iommi’s trademark riffs under Dio’s powerful storyteller voice. The perfect final curtain for this lineup and a great trampoline for Holy Diver.

Neil Wilson: I personally consider The Mob Rules as one of Black Sabbath’s greatest albums! It’s the closest album – musically speaking – that is anywhere near the classic early sound of the band at their peak! While it may not have the commercial appeal of its predecessor, Heaven And Hell – which I also love – it does have those doom-laden undertones throughout, something the band hadn’t captured since Sabotage!