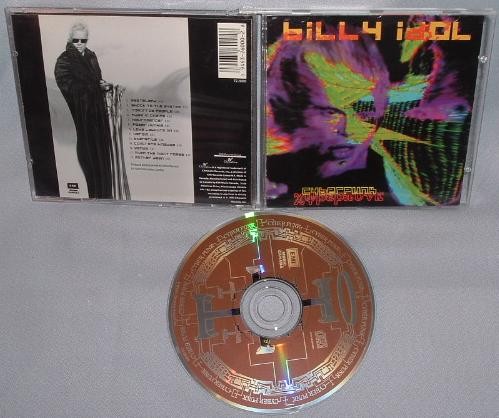 Billy Idol, truly immersed himself in the world of cyberpunk before making his fifth album, recruiting a raft of experts to help realise his futuristic vision! WHAT A DUDE!

Cyberpunk, Idols attempt to restyle himself as a futuristic cyber-rocker, works when he falls back on his effortlessly catchy guitar hooks and melodies of his past hits (the first single, “Shock to the System,” for instance).

Especially noteworthy is his techno-dance interpretation of the Velvet Undergrounds “Heroin” (featuring a repeated Patti Smith quote)
…This is old-fashioned glam-pop and occasionally glorious, as it gets…

5.0 out of 5 stars Remember historical context
When reading editorial reviews of Cyberpunk by Billy Idol, you should consider the historical context of this albums production. Three facts are crucial, but none of them affect the quality of the music. First, critics never took Billy Idol seriously despite the excellent quality of his music in terms of songwriting, performance, and production. His musical catalog up to this time was easy to deride and dismiss, and easily lumped in with a lot of crappy music from the eighties. Despite the technical and artistic superiority and historical precedence of his music (Billy was a contemporary of the Sex Pistols, not of Poison), critics mostly dismissed him as a “hair-band” disguised as a solo artist. In other words, nothing that Billy Idol did at any time — in the eighties or nineties — would have been taken seriously by critics.

The derision Billy Idol received from critics had very little to do with the success of his adaptation of the cyberpunk literary movement, technical expertise in the production of the music, or the quality of the songwriting. It had everything to do with the fact that he was Billy Idol and doing something artistically daring. It wouldn’t have mattered what the artistic experiment was: critics would have said it was crap. He could have done a classical album, a blues album, a compilation of Doors covers or anything else he artistically “deserved,” and critics would have hated it because it was done by Billy Idol.

Second, nobody would have bought anything by Billy Idol in 1993: this was the era of Nirvana. Billy has even said this was part of the inspiration for Cyberpunk: he was a real punk and people were trying to tell him he wasn’t “punk enough.” I was unaware of Billy Idols punk connections in 1993, and I’m sure so were many other people. I remember actually seeing Cyberpunk in a record store the week it came out and thinking “Oh, cool; is this about the game Cyberpunk, or is it inspired by William Gibson?” After that brief thought I think I caught sight of In Utero and that was it for Cyberpunk.

Third, you should consider that Billy Idols experiment was part of a larger movement in rock, mostly undertaken by older rockers like him. Michael Hutchence, Axl Rose and a few others tried out new production techniques, perhaps inspired by Trent Reznor. This naturally included new subject matter. Its also easy to forget that Billy had done this sort of experiment before, with his album Whiplash Smile, where most of the album is performed by Billy (vocals, guitar and bass), Steve Stevens (guitar, bass and keyboards) and programmed drums. Although Cyberpunk appears to include a full band of Mark Younger-Smith and other band-members of that time, it seems to include a lot of programming and new production techniques. Again Billy was trying out new things in true punk spirit.

The best thing about all this historical context is that none of it matters, except in understanding what Cyberpunk is about. Regardless of what critics think: Billy Idols experiment works in many ways. Despite derision over “popularization” of cyberpunk or misinterpretation or whatever, I think this album encapsulates things rather nicely. Its easy for people who are not Billy Idol fans to think this album came “out of nowhere.” Not so if you realize that Billy was always a science fiction fan (his love of Star Trek is well-known from interviews from at the earliest the early eighties). I get the same basic themes out of this album that I get out of the works of William Gibson and Neal Stephenson: corporate control of an information economy, consumerism and materialism open the way to control of our lives, etc.

Of course, the best commentary offered in this album is “The future is now,” in other words that the world depicted by cyberpunk authors was more of a commentary on contemporary culture than a mythical construction about the possible future. Considering that Billy Idol produced a work that was “ahead of its time” in many ways, acts out this sentiment exactly. In other words, Billy Idol was telling you “the future is now” almost twenty years ago, and if you didn’t listen then, you sure as hell better listen now!

Above all, this is a good album with tons of great music. If you are a Billy Idol fan then you should definitely have this album. If you are new to Billys music, then I suggest working your way up chronologically to this work. Buy it on CD: the sound quality is awesome, and crucial to the sound. 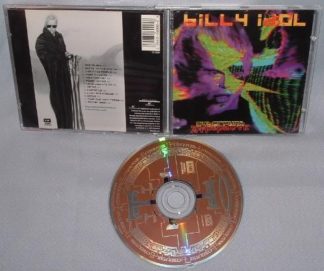