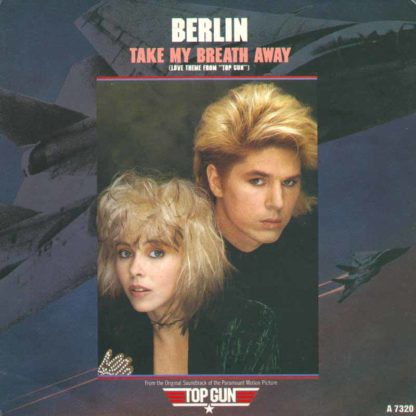 BERLIN: Take my breath away 7″ love theme from Top Gun soundtrack. Check the video + a Documentary of how it all came together!

One of thee greatest songs ever. Great story on how it all came together.

“Take My Breath Away” was the first single from the Top Gun soundtrack album and was released in 1986 as a split single alongside the song “Radar Radio”:
“Take My Breath Away (Love Theme from Top Gun)” (performed by Berlin)
“Radar Radio” (performed by Giorgio Moroder featuring Joe Pizzulo, written by Giorgio Moroder and Tom Whitlock)
The song reached number one on the Billboard Hot 100 on September 13, 1986 and became number 1 in the UK for four weeks in November 1986.

The video shows Simpson driving through a southwestern desert. She stops to fill up with petrol, and then arrives at a diner where she watches lovers in motion. The music video peaked at number five on MTVs TRL and spent a total of 12 days on the countdown.

Chart performance and certifications
“Take My Breath Away” became a number-twenty hit on the Billboard Hot 100, as well as a top ten hit on the Top 40 Tracks and the Top 40 Mainstream charts. The song also became another number-one hit for Simpson on the Hot 100 Singles Sales. Although the song did not break records of any sorts, it performed decently on the other tracks it charted on: the Adult Top 40, the Adult Contemporary, the Hot 100 Airplay, the Hot Dance Club Play, and the Hot Digital Tracks. In late 2005 it received a gold certification by the RIAA.

Be the first to review “BERLIN: Take my breath away 7″ love theme from Top Gun soundtrack. Check the video + a Documentary of how it all came together!” Cancel reply 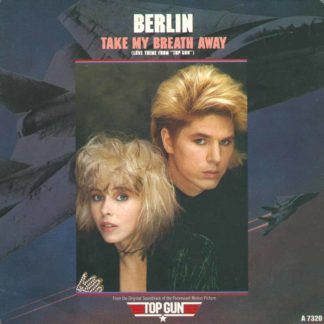 You're viewing: BERLIN: Take my breath away 7″ love theme from Top Gun soundtrack. Check the video + a Documentary of how it all came together! £2.99
Add to basket