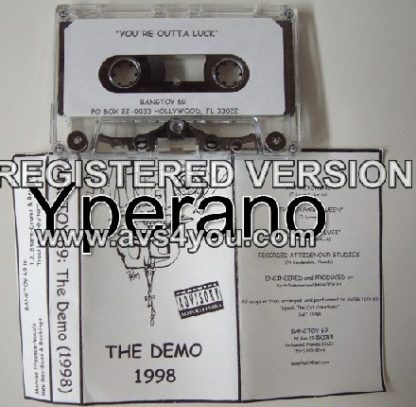 THIS IS THE ONE AND ONLY COPY WE CAN SELL TO YOU, ONCE THIS SELLS WE WILL NOT BE ABLE TO SELL THIS TAPE AGAIN.

Does anybody remember the good ol’ days, when MTV videos were filled with lingerie-clad women driving sleek sports cars and hanging out with skinny, long-haired rockers?
Bangtoy 69 sure does. Heavily influenced by ’80s metal, the hard-rocking Hollywood foursome — vocalist Marcus Fraunce, bassist Rey Rey, drummer T.J. Storm, and guitarist Traci Lynne — proudly plays the kind of music that used to sell records by the truckload.
“”We never really made that transition the other bands did,”” Lynne says, referring to the ’90s tendency to go altrock. “”Our hearts really lie in the Skid Row, L.A. Guns, Motley Crue and that whole West Coast thing. That what we like to do. We don’t want to change things because we’re not popular. I believe there a market for it somewhere.””
“”We know the type of music we play isn’t very prevalent right now, but it makes us very happy,”” Lynne insists. “”We didn’t cut our hair off and grow goatees and go out and buy rave clothes. And because of that, I think we’re very pure to what we do. What makes us happy is playing hard rock — straight-ahead hard rock.””

This tape includes the masterpiece “”You are outta luck, I am too drunk too fuck””, Monkey Shine,  trailer park queen.

Bangtoy 69 originates form Florida.  The band had minor success in the States (USA) before calling it a day.

Then renaming himself, singer Frank Lee decided to pack his bags for the UK and start afresh a decade later with a new line up.  Along with the wonderfully named Johnny Nonsense on guitar Bangtoy made a loud brattish noizz with some infectious riffs that lay in the gutter of where Skid Row would pee. Frank Lee has a lot of front and got the crowds singing every single time, especially on songs like ‘Your Outta Luck’, with lyrics that wouldn’t be out of place on a Steel Panther album.  Good greasy rock.

Check the new line up, years later, check this live review too:

“Great songs like this are normally associated with the likes of L.A. Guns, Motley Crue, Tesla or Skid Row and that’s where Bangtoy belong and somehow i get the feeling that they will quickly gain mass recognition.
The set was full of life, frontman Frank is a true performer he sings with a big voice and gets the crowd involved throughout, he is backed by a first class band complete with a drummer who does fancy stick twiddling !Solid bassist and stunning guitarist.
Show stealers tonight were “Spank The Cat” im sure you can work out what that’s about and the awesome “Your’re Outta Luck” which worked the crowd up with one of the best sing-alongs i have ever seen at the gaff….. “cause I’m too drunk to fuck!””.

Frank Lee (Vocals)
Jonny Nonsense (Guitar)
Pauly Tsarion (Drums)
Joey Kash (Bass)
First release for the new line up, now based in the uk, for former American rock group known as Bangtoy 69.
This is a great ep and one that shows that reforming after 10 years was a good idea and that they can be a force to be reckond with.
Hitting play we are treated to a song about female masturbation !
Its anthemic and heavy as fuck, imagine Poison with balls and behold, great guitarwork, screaming vocals and powerfull drums from former Paul DiAnno’s Battlezone skinsman pauly.
‘Demi’s Room’ is a moody fast paced rocker with that anthemic shout it out quality that runs through all these songs, nice pounding bass in this one as well.
Finally we come to ‘Outta Luck’, this my viking metal hoardes is THE song that will get you headbaning and screaming out the chorus “Too Drunk To Fuck”, not a reference to the Dead kennedy’s classic, but a full on post hair metal rock work out.
Its got it all kick ass drums n guitars, awesome lead vocals, great backing vocals and the afore-mentioned chorus.
Bangtoy are back with a (Excuse the pun) BANG!
Rating 10/10
For Fans Of : Motley Crue, WASP, Skid Row, King Lizard, Posion, Roxville, Bon Jovi.

Be the first to review “BANGTOY 69: The demo (1998) RARE [Tape cassette]. Check the mega hit “You are outta luck, I am too drunk too fuck”. For Steel Panther fans.” Cancel reply