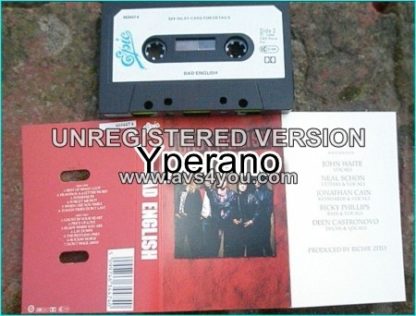 Simply put, “Bad English” is one of the greatest AOR / Melodic Rock albums ever made, easily in my Top 50 of All Time.
What happens when your talented lead singer decides to break up your legendary band, leaving you out in the cold?
Ask that question to Neal Schon and Jonathan Cain of Journey in regards to Steve Perry, and their answer will be to find another ‘super vocalist’ and form a new group.

That is exactly what led to the formation of Bad English; Cain called his former bandmate in The Babys John Waite (who already had a successful solo career), add a terrific Rock drummer in Deen Castronovo (future Journey skin basher) and you a have a super-group of talented musicians.
Chuck into the mix the great Richie Zito’s full production (particularly those drums) plus some songwriting contributions from Diane Warren, Mark Spiro, David Roberts and Martin Page, and you’ve got an album of pure AOR gold.

The songs in “Bad English” are awesome. All of ’em.
This band of course is best remembered for the #1 hit ballad “When I See You Smile” and to a lesser extent the top 10 “Price Of Love”, also a midtempo ballad. For sure, the ballads such as these shine on this album.
However, the disc had 4 other songs to receive radio airplay in one format or another, including the leadoff single “Forget Me Not” – a great rocker that was a top 50 hit. The first two tracks on the album “Best Of What I Got” and “Heaven Is A 4 Letter Word” are fantastic rockers that both got some rock radio airplay, and the third cut “Possession” is another nice semiballad that hit the top 40.

But Bad English rocks as well, with an extremely polished sheen, yes, but full of fire.
Check the standout “Ready When You Are”, “Lay Down” and “Rocking Horse” as well as midtempo “The Restless Ones”, a truly gorgeous anthemic song.
Then there’s “Ghost In Your Heart”… what a song. Dramatic, emotive, with lyrics reflecting the mood of the track perfectly. And the sweet closing track on the album “Don’t Walk Away”, a perfect poppy AOR song.

“Bad English” is so terrific simply because all these songs have killer hooks, memorable choruses, superb playing and stellar production.

AOR / Melodic Rock masterpiece.
A MUST HAVE

5.0 out of 5 stars A classic album,
I have never been sure why this album isn’t touted as one of the great AOR / Melodic Rock albums of all time (if it has, I haven’t read about it!). With a stellar line-up including John Waite, Neil Schon and Jonathan Cain, this project couldn’t really go wrong. And indeed it didn’t. Virtually every song on this dÃ©but album is genuinely great. The band penned some cracking material, the trademarks being John Waite fantastic heartfelt vocals, Neil Schon awesome guitar solos and a host of big, catchy choruses and hooks. As if they needed her, Diane Warren also lent a hand in writing the huge ballad ‘When I See You Smile’, not surprisingly a number one hit in the U.S.
It would take too long to go extol the virtues of each song, but my personal faves include mile’, ‘The Price of Love’ (immense passionate vocals from JW) and the grinding, cool groove of ‘Rockin Horse’. If you are into John Waite, Journey or any high class melodic rock, this is an essential purchase.

Bad English was an American rock band supergroup formed in 1988, reuniting keyboardist Jonathan Cain with singer John Waite and bassist Ricky Phillips, his former bandmates in The Babys. The members decided on a name for the band while playing pool. John Waite missed a shot and Jonathan Cain made a comment on how bad his “”english”” was (referring to the spin a player puts on the cue ball) and the band decided to use the phrase. Jonathan Cain and guitarist Neal Schon, who had enjoyed enormous success in Journey, continued on to form Bad English with Waite after Journey disbanded. The first album, eponymously titled, was a big seller with three hit singles, including the number one hit “”When I See You Smile”” written by Diane Warren, the top 10 hit “”Price of Love,”” and “”Possession.”” Another track from the debut album, the AOR song “”Best of What I Got””, was featured in the soundtrack to 1989 Tango and Cash The band second album, 1991 “”Backlash”” came and went without any fanfare. The only single, “”Straight To Your Heart,”” just missed the Top 40, peaking at #42. Ricky Phillips writes on his website that the group had parted company before the second album had been mixed. Both Phillips and guitarist Neal Schon expressed frustration with the “”pop”” side of the bands songs and wanted a harder edge. In the end, it proved to be the band undoing as everyone left to pursue other projects. In later interviews Waite revealed that although he loved playing to stadium-sized audiences, he was uncomfortable with the corporate rock image that he felt the band had presented and has been a solo artist ever since. Bad English drummer Deen Castronovo later went on to join a reformed Journey with singer Steve Augeri, Neal Schon, Jonathan Cain, and Ross Valory. He also played on Ozzy Osbourne album Ozzmosis in 1995

Bad English is the self-titled platinum-selling debut album by American rock supergroup Bad English, released in 1989.
The band scored two huge hits on the Billboard charts including the #1 hit “”When I See You Smile”” and #5 hit “”Price of Love””. In all, five singles were officially released from the album, all charting on the Hot 100.
First single “”Forget Me Not”” was a major hit at rock radio, spending two weeks at #2 on the Mainstream Rock Tracks chart, but it narrowly failed to hit the pop Top 40. The second single was the Diane Warren-penned power ballad “”When I See You Smile””, which was a massive multiformat hit, spending two weeks at #1 on the Hot 100, two weeks in the top 10 at rock radio, and getting significant and sustained play at Adult Contemporary radio. But “”When I See You Smile”” lingered in the pop Top 40 and was still climbing the Adult Contemporary charts, and close to being certified Gold, long after the song had peaked at rock radio. When the decision was made to release a second consecutive power ballad as the album third single (“”Price of Love””), the band released the stomper “”Best of What I Got”” as a promo to U.S. rock radio, hoping to maintain interest and credibility with the rock audience for their live headlining tour. The plan worked, as “”Price of Love”” hit the pop top five but didn’t receive enough rock radio airplay to hit the 40-place Rock Tracks chart, while “”Best of What I Got”” surged to #9 there (the band second-highest showing on that chart), and the band was invited to join the Whitesnake tour beginning in the spring for a second jaunt around the U.S.