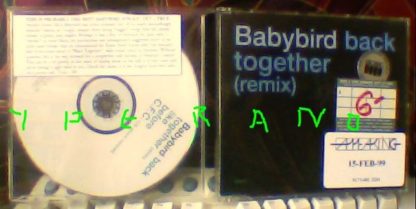 BABYBIRD: Back Together (remix) PROMO CD (3 songs) 1999. Check video, the additional songs, and all the press for this release.

All stickers are removable and attached on the surface of the jewel box.

Press release:
This is probably the best babybird single yet…true.
Stephen Jones aka babybird has never released one of his many astonishingly beautiful ballads as a single, despite them being “bigger” than the steady stream of guitar pop singles. Perhaps it was the fear of rejection by radio with a “slowie” or more likely, the production and arrangement suggested more of an indie band release than an international hit. Enter Steve Lironi who has remixed and re-recorded most of Back Together, with a new vocal by Stephen. Without question this is the way forward for a songwriter and vocalist of Stephen’s cabibre. This can be a hit purely on the basis of airplay alone so the ball is in our court and we’re hitting it right back to you. Check the video, it is the longest xxxx ever seen on a promo vid. True. -SP.

Review from The Bad Pages
“One can regret that this version never made it to the album because it is no less than the greatest and most grievous balled Jones have ever penned – no less. Far away from any bedroom-recording amateurism, this is Babybird on the largest symphonic scale imaginable.

Back Together is a tale of lost love and separation with grandiose stings arrangement and a final that will leave you breathless – it’s that beautiful, really!. Probably the best single so far, how I would have loved a 5 track version. CD1 includes a version of ‘Hatesong’ (sounds like a live take in the studio) and CD2 covers I was Born a man’s ‘CFC’ – the same version found on the US version of Ugly Beautiful.”

Be the first to review “BABYBIRD: Back Together (remix) PROMO CD (3 songs) 1999. Check video, the additional songs, and all the press for this release.” Cancel reply 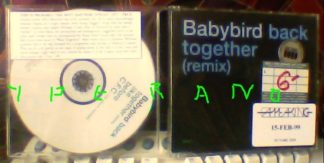 You're viewing: BABYBIRD: Back Together (remix) PROMO CD (3 songs) 1999. Check video, the additional songs, and all the press for this release. £2.00
Add to basket