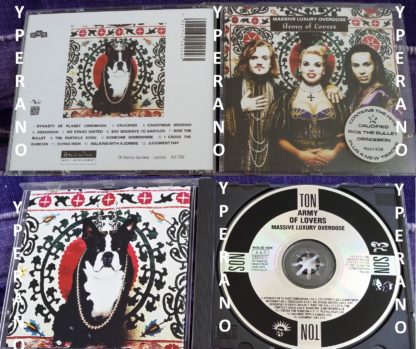 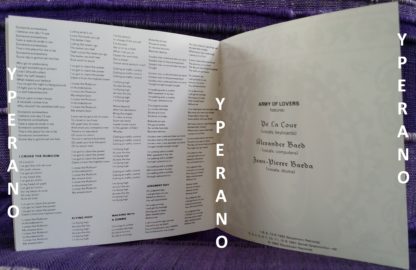 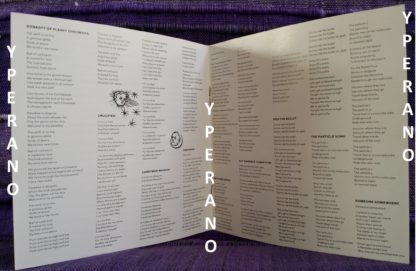 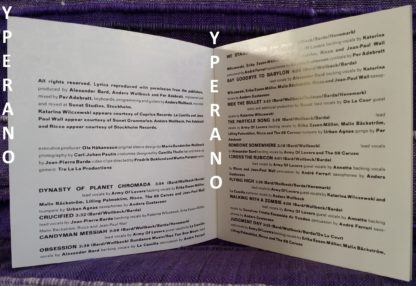 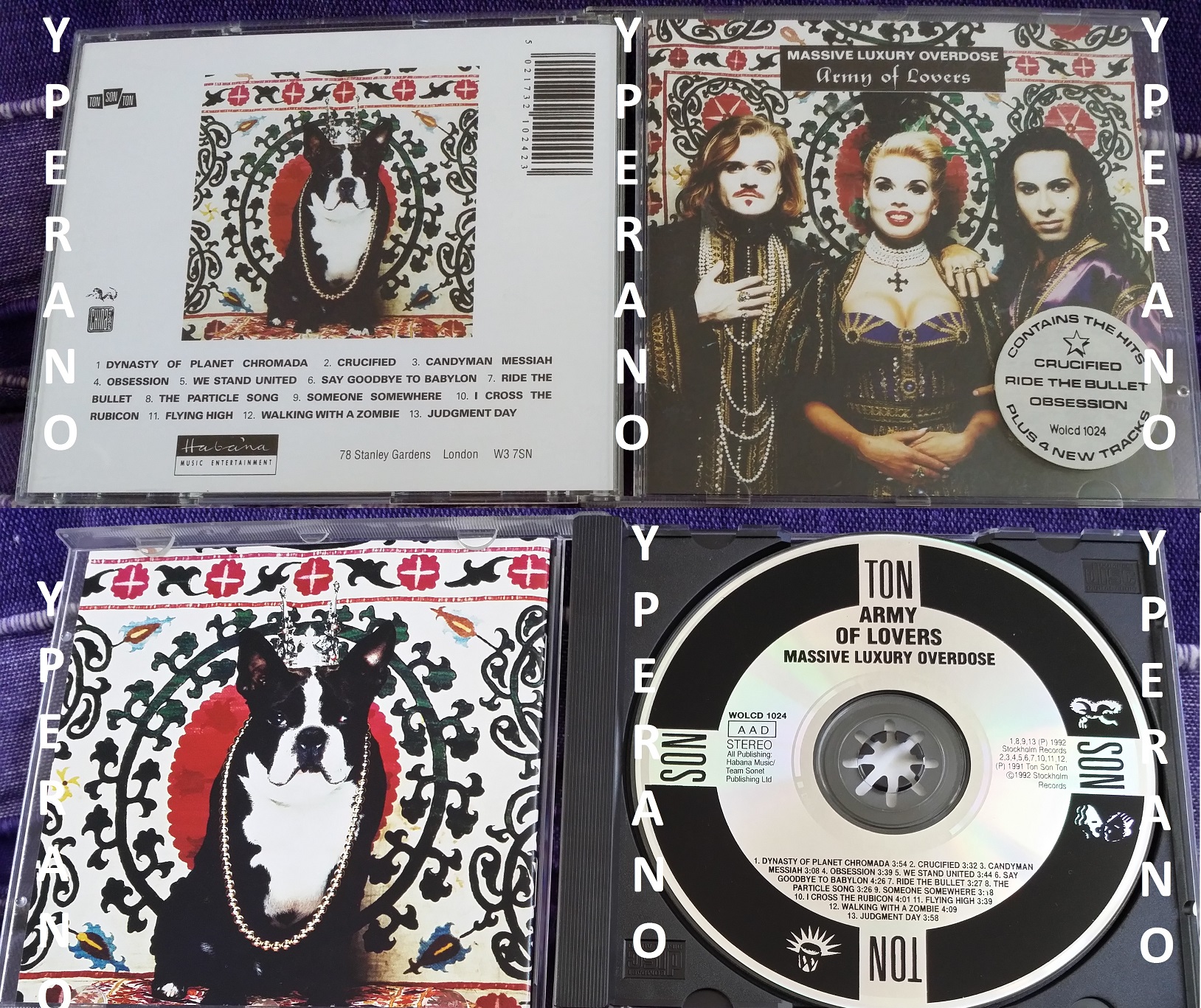 5.0 out of 5 stars More Multi-themed techno-pop from Swedish Army of Lovers,
Massive Luxury Overdose goes beyond its predecessor in incorporating more joint vocals among the trio, now consisting of Alexander Bard (vocals/computers), Jean-Pierre Barda (vocals/drums), and Michelle De La Cour, simply known as De La Cour (vocals/keyboards). La Camilla was fired from the group although she has some guest vocals here. More of the choir chorus introduced in the first album is emphasized, as well as the religious, sci-fi, and scientific motifs on their bubble-techno songs.
“Dynasty Of Planet Chromada” is about some beings from outer space who are self-styled heroes, like those at Masada, who seeing the Earth in the throes of apocalypse, seek to restore it under their rule.

The technofied, choir-vocal-oriented “Crucified” has Barda on vocals, plus the regular backing vocalists whose combined vocals make it an operatic choir add much to the religious aura of this song, whose protagonist is a very devoted acolyte to some god: “I’m crucified/crucified like my saviour/saint like behaviour/ a lifetime I prayed.”

“Candyman Messiah” is a moody drum machine and synth number with the main trio singing, with guest monologue by La Camilla.

She has the same role in “Obsession” set to Alexander Bards lead vocals. This number has a few airy synths permeating. A monologue by Bard sums up something I went through: “There ain’t no promises/ain’t no commitments/but how cruel love can be/how cruel can a broken heart like mine/there ain’t no right/there ain’t no wrong/but as long as hope survives/I’ll stay alive.”

“We Stand United,” with the backing choir, is a bouncy Stock-Aitken-Waterman type number, although their lust in material dreams might be a turnoff: “gold bars are a must/in money we trust.” The string-synth laden “Say Goodbye To Babylon” is a hymn to a citys thats fallen under so many invasions, with references to Nebuchadnezzar, the Hanging Gardens, the mysterious signs that Daniel translated the eve of the citys fall to the Persians, and Xerxes’ conquest of the city. The choir is present in the chorus.

Chemistry students will get the goofy techno “The Particle Song,” speaking of accelerated particles flying through cyclotrons, starring particle y and z as “macho men of the molecules,” and “atoms in disguise dressed like electrons.” Like “Crucified,” the choir is dominant here. A very silly song and a favourite.

The whispered desires of a certain Louis for power are intercut with soulful guest vocalist Annette on “I Cross The Rubicon,” in this reference to how Julius Caesar made the decision to march to Rome and get his empire.

“Flying High” is a Stock-Aitken-Waterman-type number fit for Kylie or Rick Astley about a pilot and passengers who are flying high, but they crash and end up flying high, with angels taking them away to Eden to play.

When singing of “Judgment Day,” the protagonist sees it as nothing more than getting revenge on someone who left him. Barda sings the chorus, followed by back-to-back monologues by De La Cour and Barda, and etc. The backing choir that sings at the end adds to the finality of that day, and they, along with more engaging songs and rhythms, make this higher than their debut.
——————————————————–
5.0 out of 5 stars ABNORMALLY GOOD FUN!,
Army of Lovers is one of those groups in the vein of “Queen” whos music took the club circuit by storm with their phenomenally unique and risque single “Crucified”. The groups versatile and harmonious vocals richly thread themselves through a myriad of double-entendre lyrics accompanied by some of the best upbeat tunes ever conceived. Once you’ve been exposed to this group you’ll be infected for life and crave anything they produce! Standout cuts from this album (in addition to “Crucified”) are “Obsession”, “We Stand United”, “Say Goodbye to Babylon”, “The Particle Song” (one of their best), “Flying High” and the fun and funky “”Walking With A Zombie.” The album closes with “Judgement Day,” a song you will long remember and hum in your head. Often campy, the group provides the listener with abnormally good fun. A must have album!
——————————————————–
5.0 out of 5 stars Leave your prejudices at the door,
I don’t know if anyone who doesn’t know this group is ever gonna buy their music. So if you read this you should know some of their music. Beside the fact that they were the weirdest thing around (later came Manson) and their behavior was quite unordinary and questionable, their music was quite good, funny and with a good sound. This in my opinion is one of their best albums. After parting with La Camilla (who re-joined them for ‘Les Greatest Hits’) they re-re-recorded ‘Ride the Bullet’ along with a couple of new songs (1.,5.,7.,12. and maybe another one – I don’t have it on hand) and substituted the cover from a similar to the ‘Crucified’ single with them standind on a Lion skin and with stuffed animals to the new one with Michaela Dornonville De La Cour as the new front woman. She too joined them in their cruise on flaunting their sexuality and fun.
Anthem ‘Crucified’ is followed by other incredibly funny-stupid lyrics but nevertheless great songs. I adore ‘The Particle Song’ and ‘Flying High’ and love all the others. Check out video collection below if you can (needless to say you’ll get what you expect). They perform in choir in the choruses, while a lead or more than one exchange the other parts. If you like on of their songs you’re more then likely to become a fan. This album is outstanding and its sad that they are so unknown. Neddless to say they deserve to be in the spotlight much more than lots of todays talentless acts.
———————————————————
5.0 out of 5 stars
Very cool album. Favorite song is “Crusified”, unfortunately that was the only song that got any airplay in the USA. I like just about every song on here.
———————————————————
5.0 out of 5 stars I didn’t expect such a GOOD MUSIC!,
I really enjoy the Army Of Lovers’ songs and especially songs from this album like Crucified, Say Goodbye To Babylon… Songs like Someone Somewhere and Obsession are one of the best I’ve ever heard.
———————————————————-
5.0 out of 5 stars Love It!,
Even though I have not heard Obsession for ten years I still know every word.
Warning this album will turn you into a dancing queen and you will never forget the lyrics until you die.
——————————————————–
5.0 out of 5 stars
it is deliciously great fun, listen to the cd on a Tuesday night and dance around your living room like its the weekend.
———————————————————
5.0 out of 5 stars ARMY OF LOVERS… OOO LA LA!,
Ok ok you MUST buy this cd. Cruified may the best best song ever written. Thier music can be described as a fusion between the vocal styles of Right Said Fred and the dance beats of Buster Poindexter, with a hint of Fabio. I nearly peed in my pants when I first heard it. For those 14 year olds reading this in the dark, late at night, you should buy the cd for the big breasted chick on the cover! BUY IT NOW!
———————————————————-
5.0 out of 5 stars crazy, but great, group. Its time to crank up the volume and enjoy the timeless classic! This album is sooo good. Current Hollywood crap-Pop should learn something! Be original! 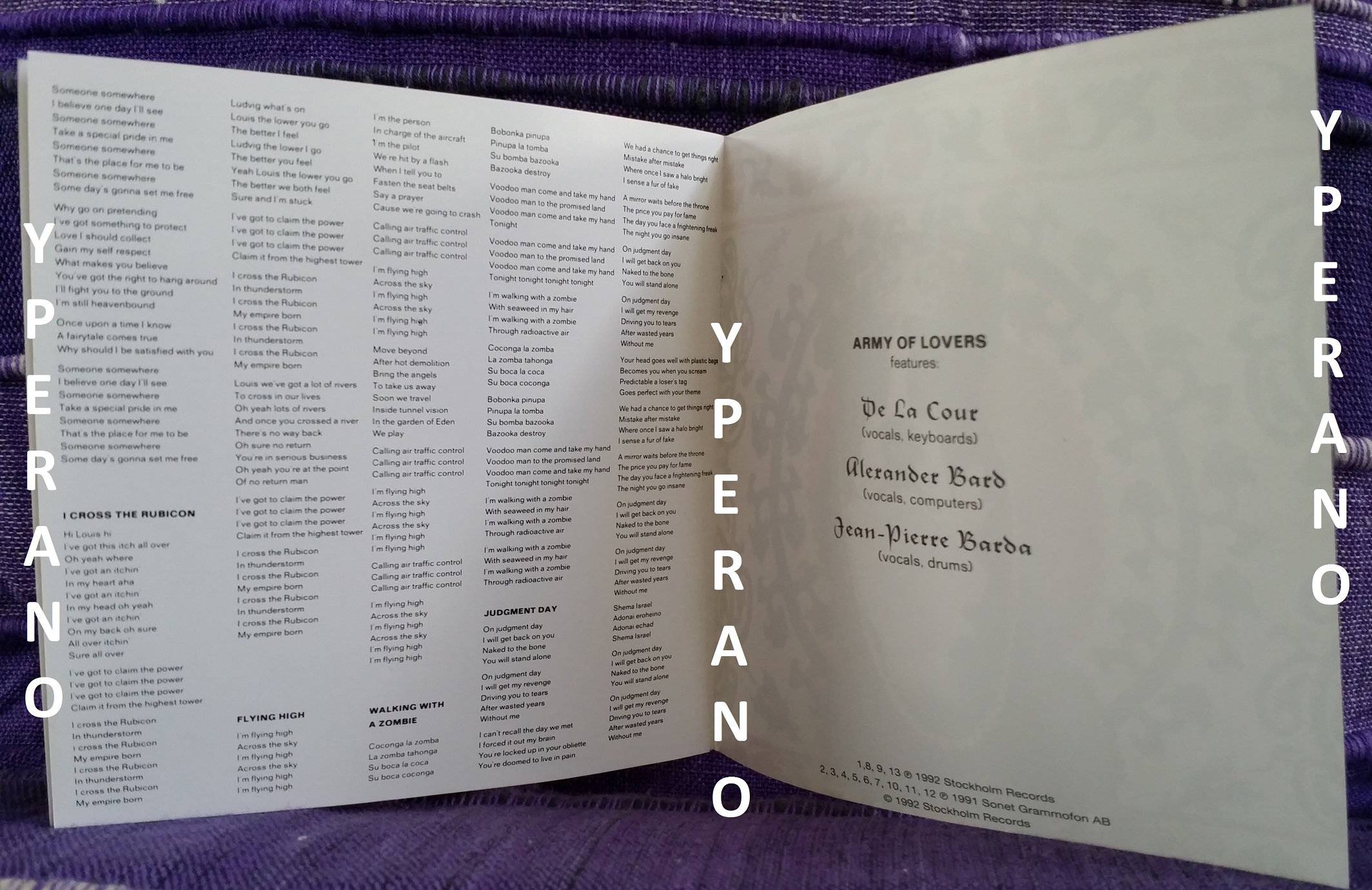 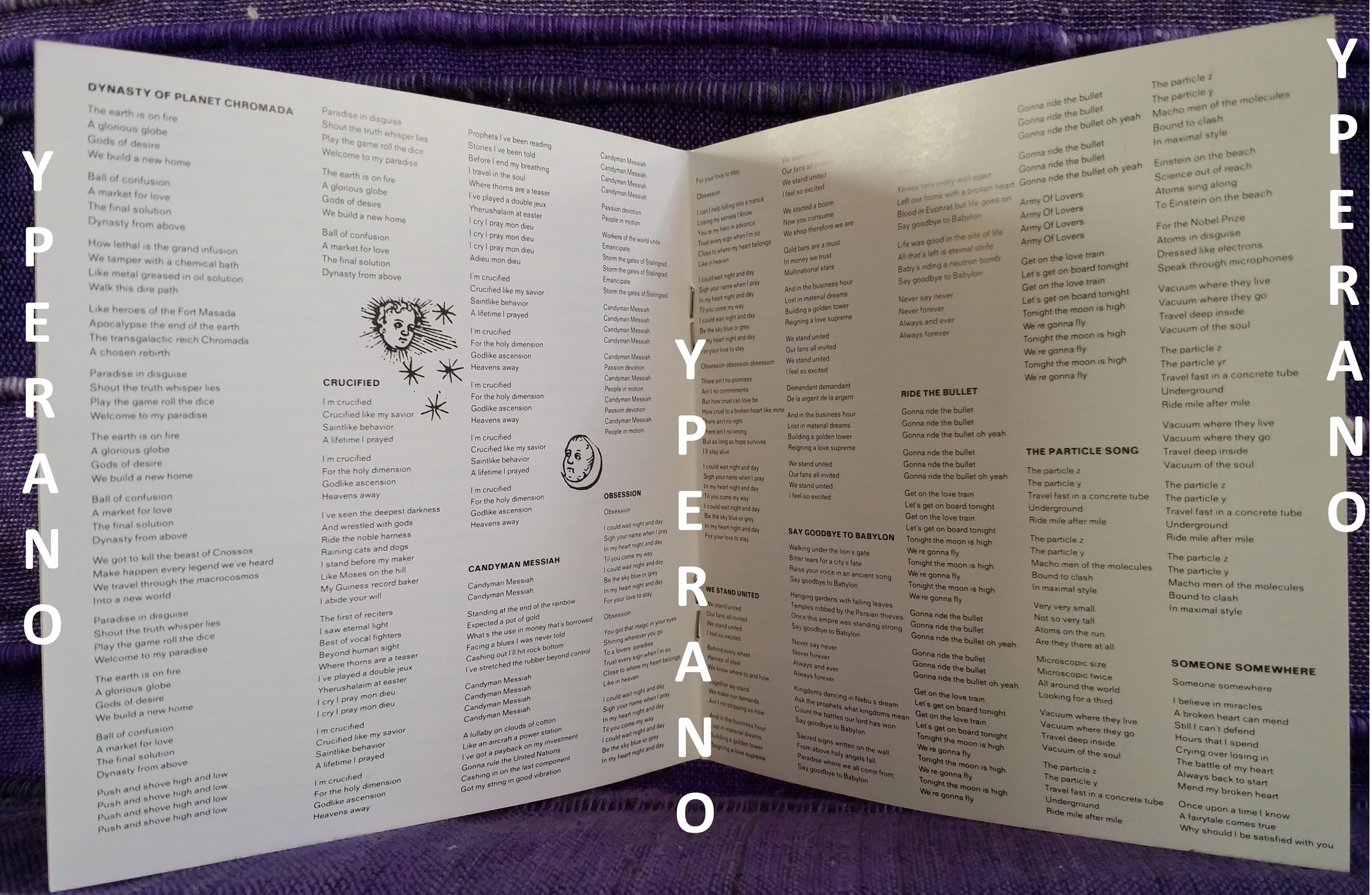 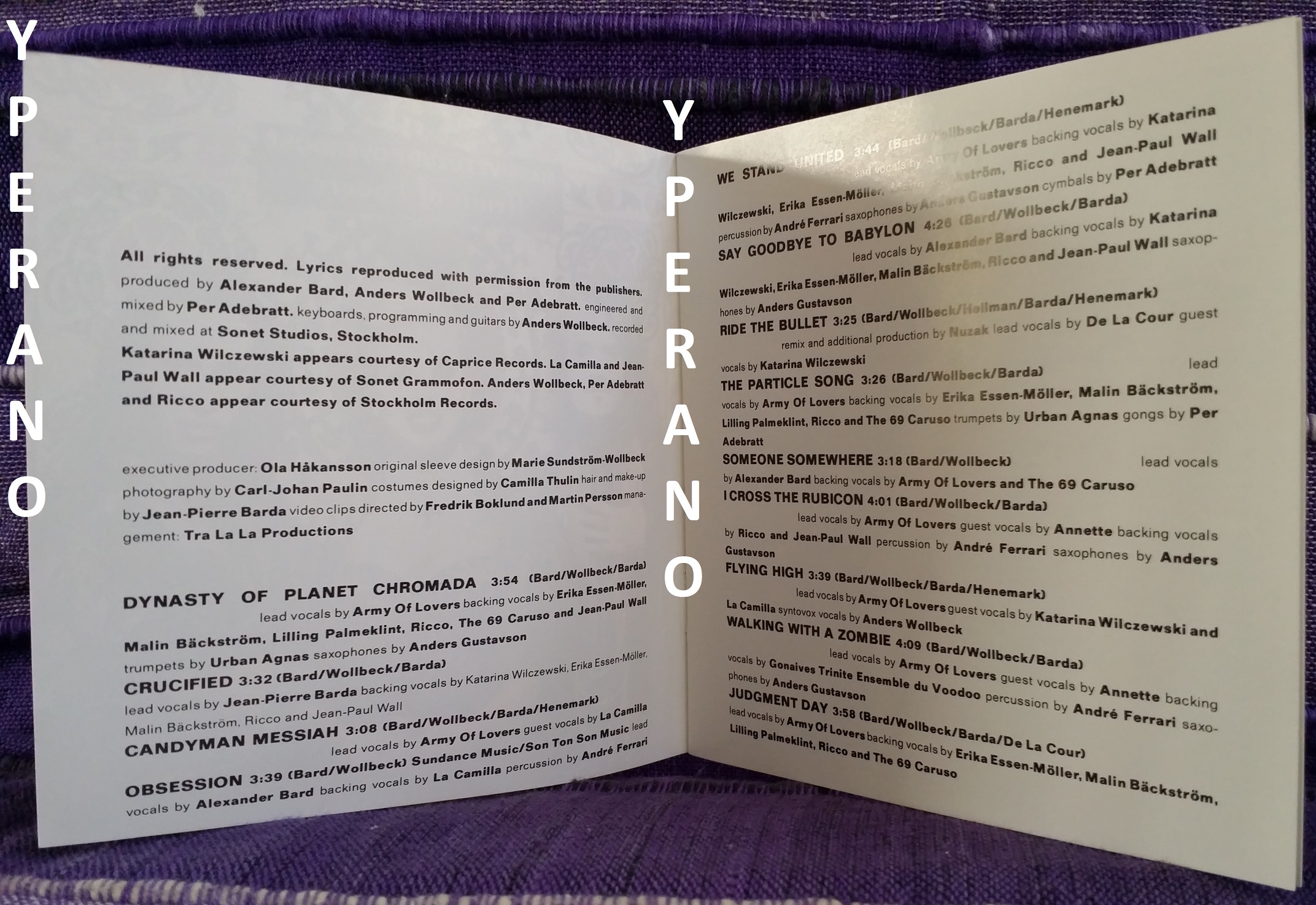 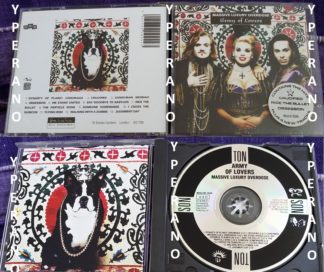