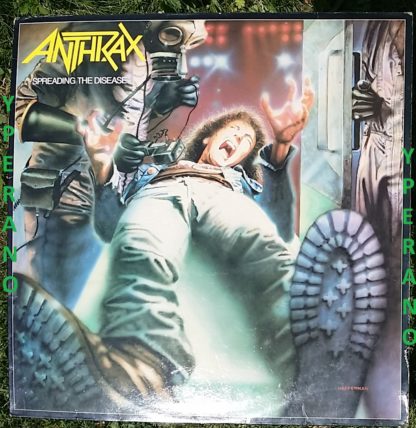 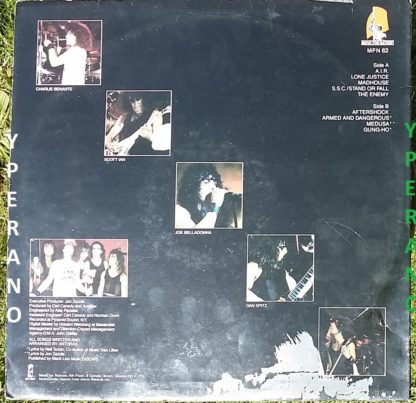 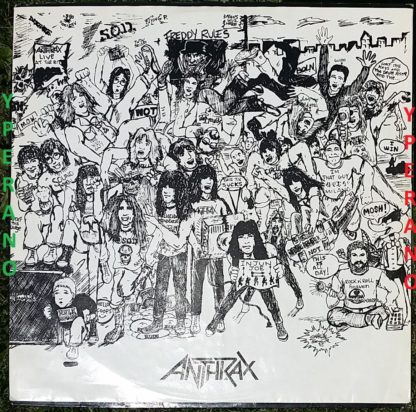 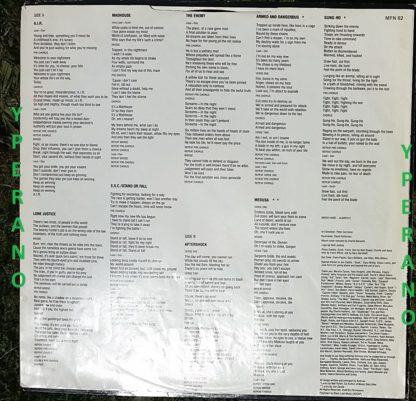 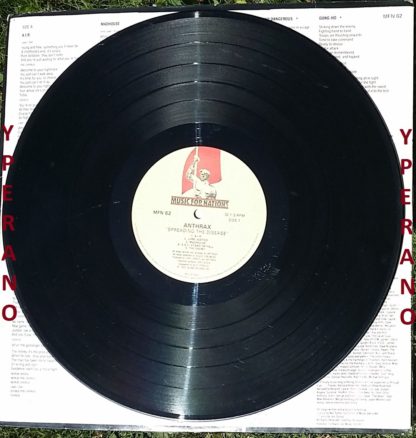 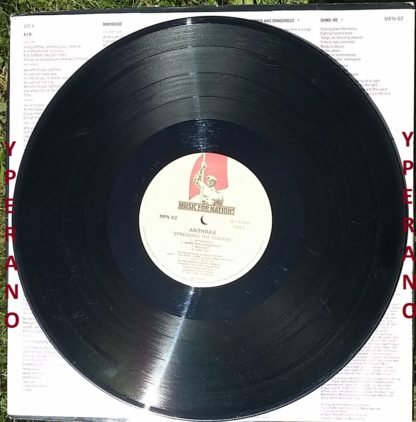 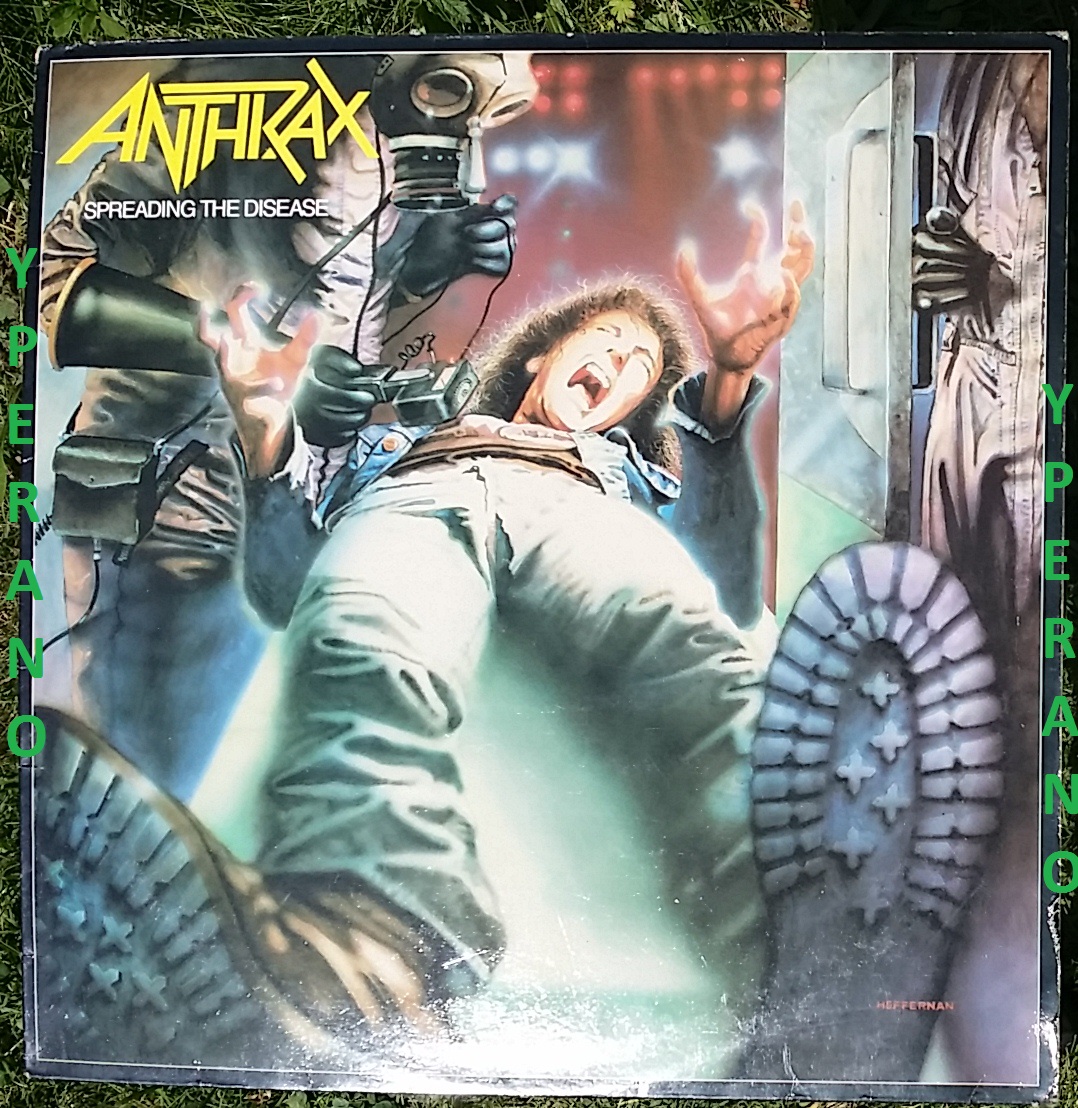 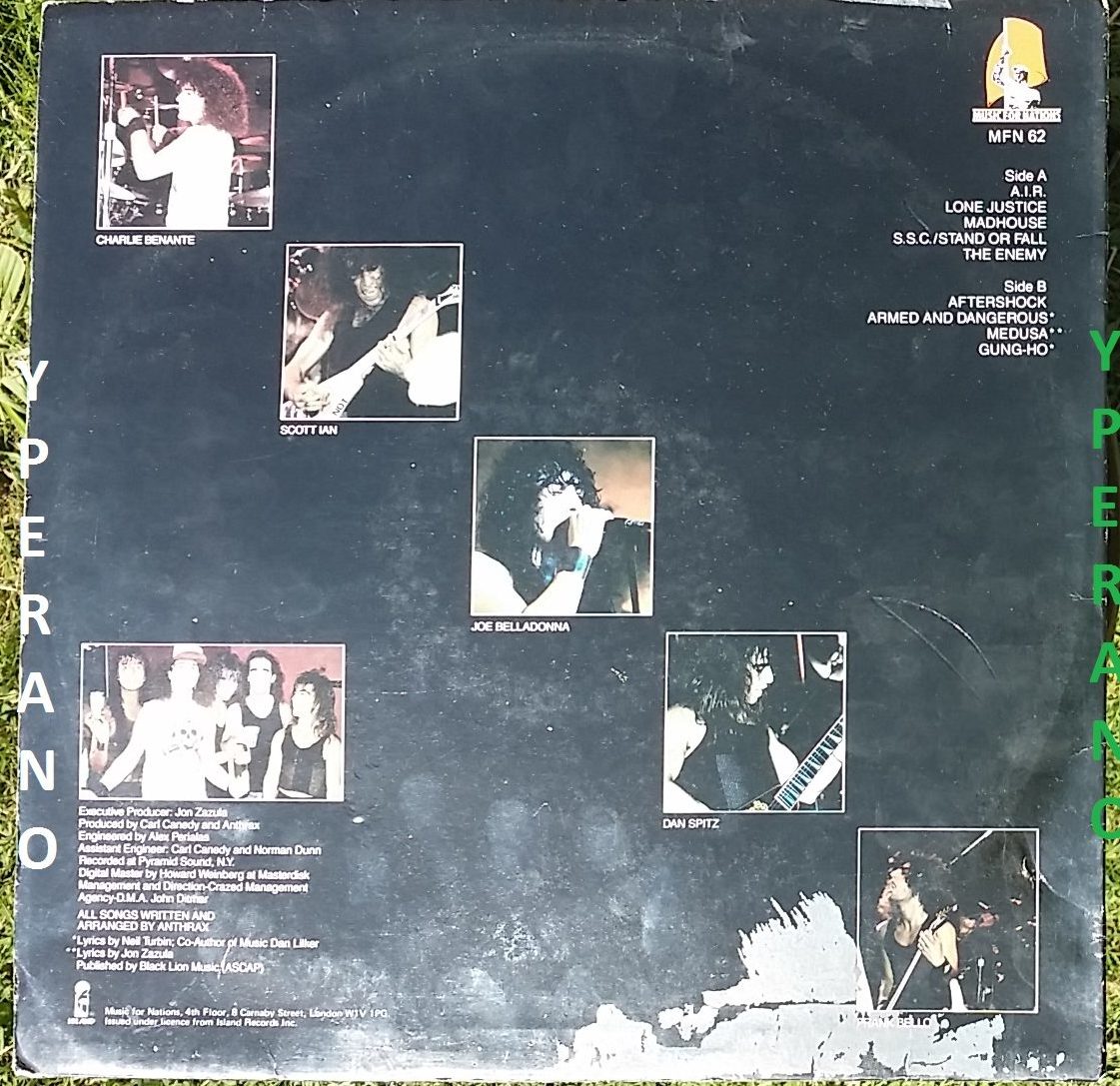 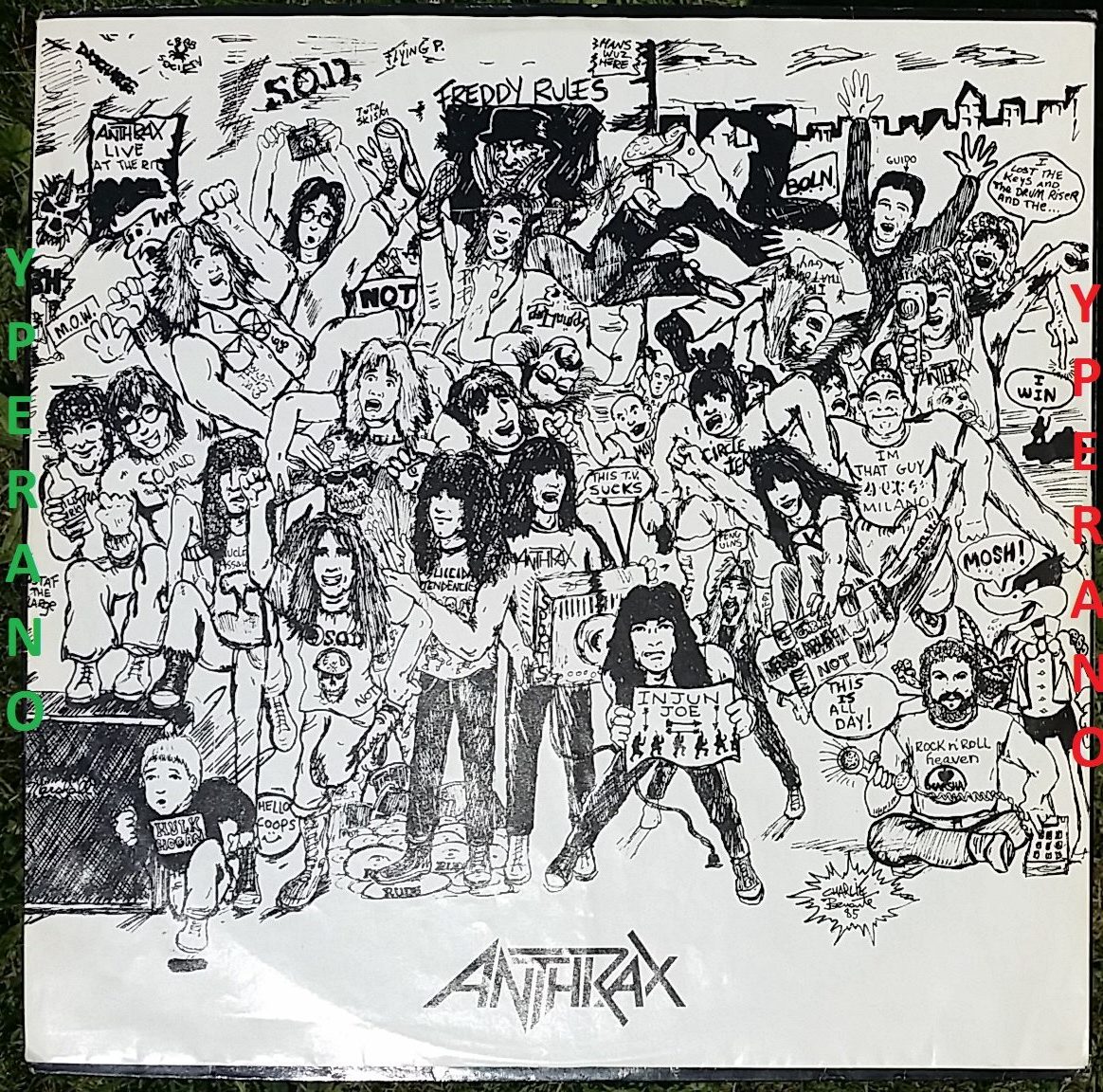 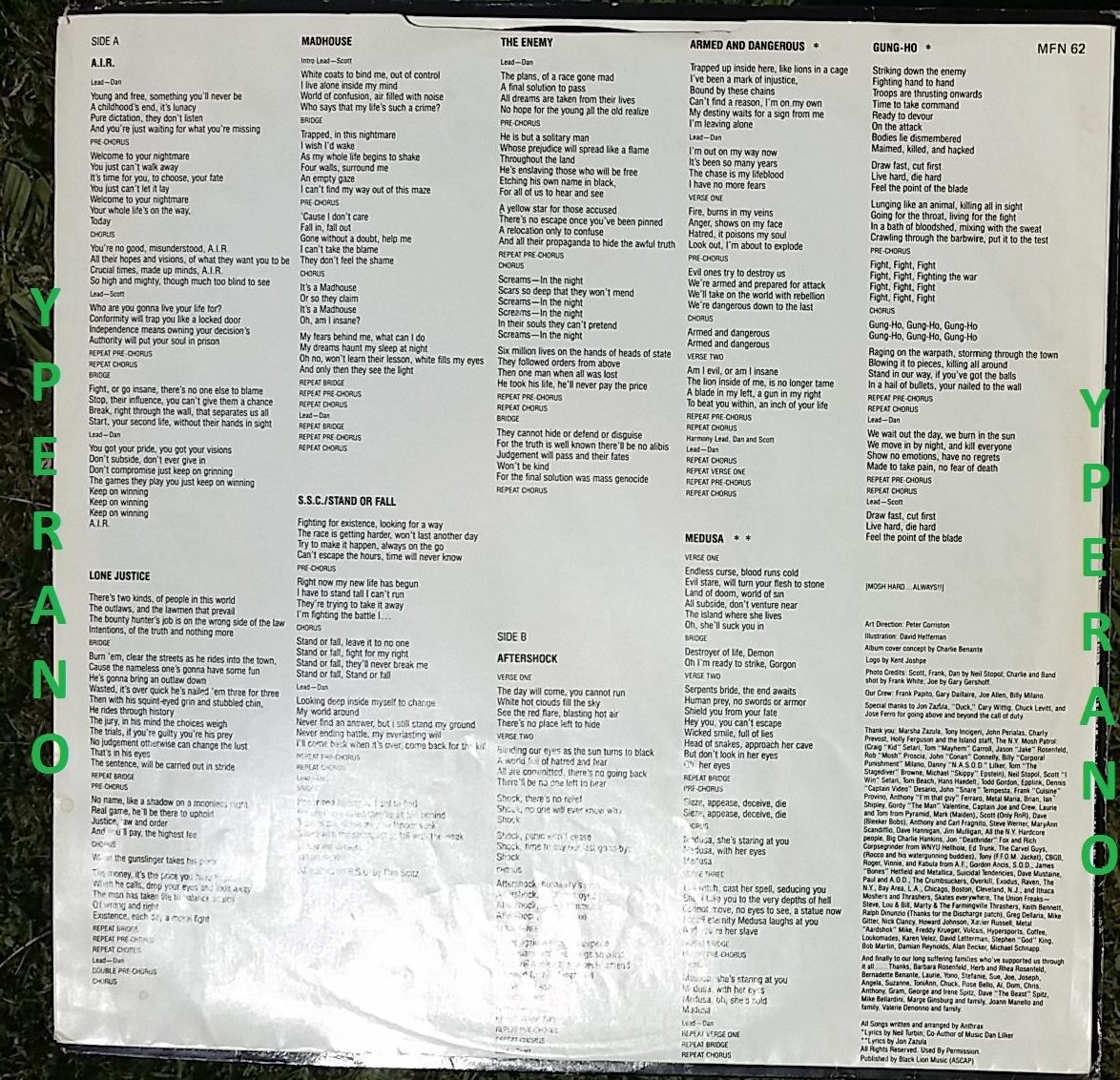 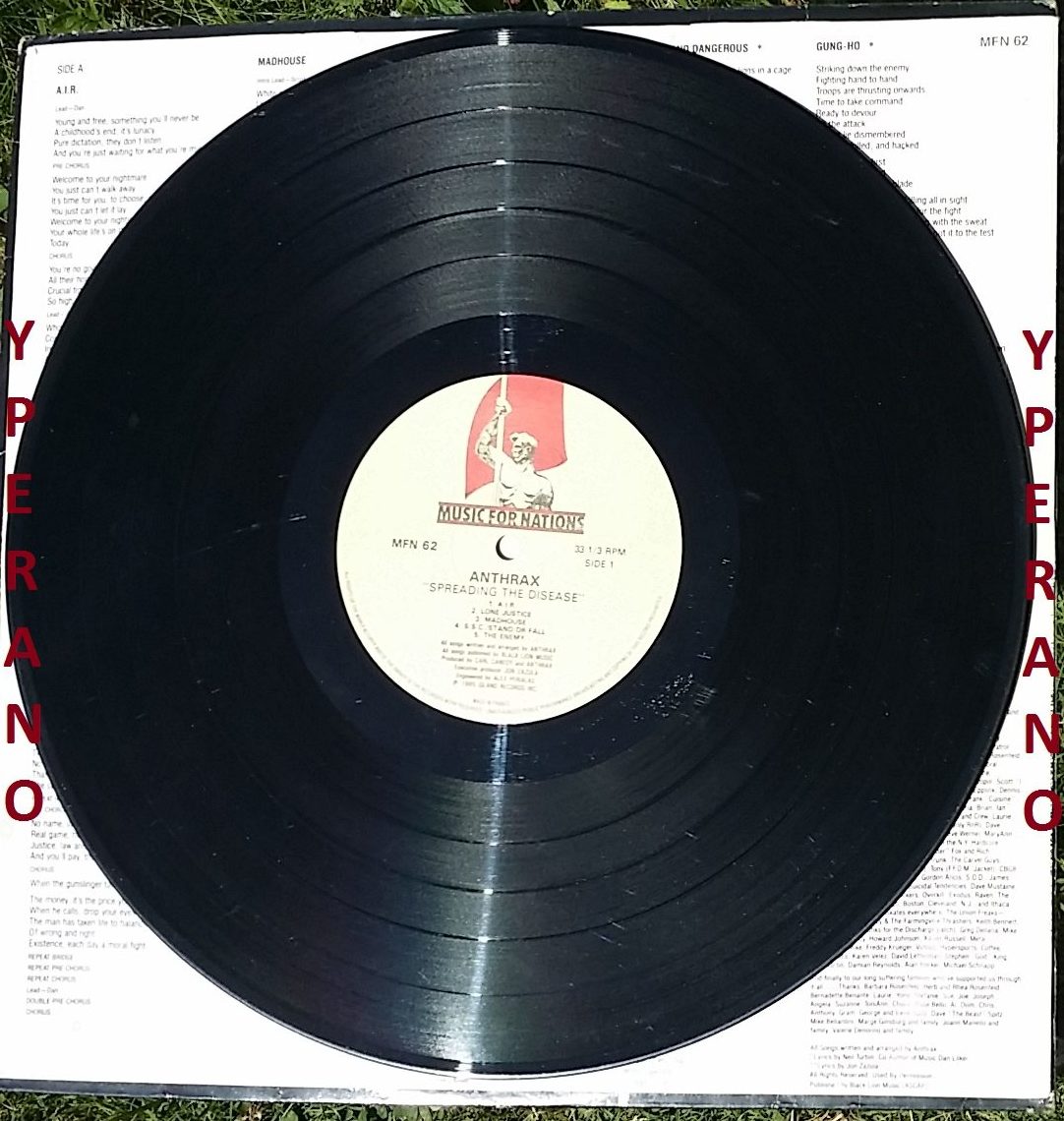 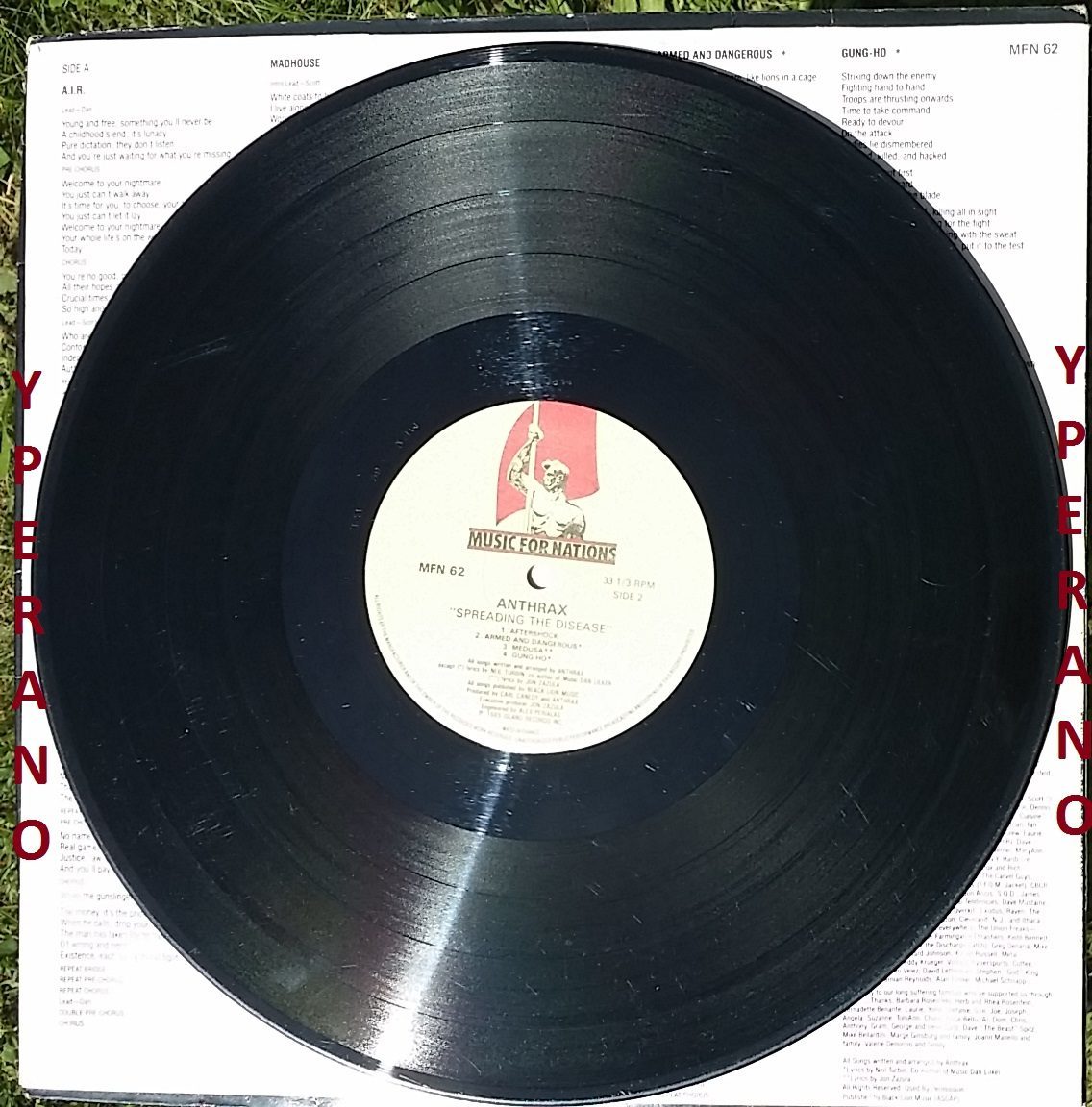 ANTHRAX: Spreading The Disease [When was the last time that you have seen this masterpiece around? Features classics like Gung-Ho, Medusa, Armed and Dangerous, A.I.R and the hugely overrated Madhouse]

Spreading the Disease is the second studio album by American heavy metal band Anthrax and the first with vocalist Joey Belladonna and bassist Frank Bello. The album was released in October 1985 by Megaforce Worldwide/Island in the United States and in March 1986 by Island Records globally.
The band produced the album with Carl Canedy, Jon Zazula serving as executive producer. The album includes the single “”Madhouse””.
A music video was produced for “”Madhouse”” as well, but didn’t receive much airplay because it was banned by MTV, who believed the content to be degrading to the mentally ill.
This was the last Anthrax album to feature songwriting from fired vocalist Neil Turbin, who is given songwriting credit on the songs “”Armed and Dangerous”” and “”Gung-Ho””. Songwriting credit was shared to the track “”Medusa””, the first and only songwriting contribution from former producer Jon Zazula. Originally he was credited as the sole writer of the song, but reissues credited the rest of the band to it as well.

Anthrax first album with vocalist Joey Belladonna is a huge leap forward, featuring strongly rhythmic, pounding riffs and vocals that alternate between hardcore-type shouting and surprising amounts of melody. Two tracks left over from the Dan Lilker days are here as well. The traditional metal lyrical fare is more original, while also introducing a penchant for paying tribute to favorite fictional characters and pop culture artifacts (“”Lone Justice”” and “”Medusa”” are prime examples). One of Anthrax best efforts.

With their classic lineup now in place, Anthrax unleashed Spreading The Disease in 1985. I now consider Spreading The Disease to be a great metal album. The first thing one may notice about Spreading The Disease is that, on average, it is not a particularly fast album. Compared to Anthrax’s debut Fistful Of Metal, as well as many thrash albums of the day, this album is a little more methodical in its approach. This allows the listener to really soak in the riffs and absorb the songs. The drumming of Charlie Benante (pretty much the quintessential thrash drummer) and the spirited vocals of Joey Belladonna highlight the album. Belladonna added a very unique element to Anthrax. He was an actual singer, one of the old school heavy metal style. He was given quite a task, to try to sing over thrash music, but he did a fine job. Without Belladonna, songs like Stand Or Fall and Medusa may not have reached their full potential. At times, he brings an almost power metal feel to Anthrax. Mixed in with their obvious thrash, speed, punk, and NWOBHM leanings, this gave Anthrax a sound that was all their own. Faves include the aforementioned pair; Stand Or Fall and Medusa, as well as Armed And Dangerous and the album’s lone OTT speed machine, Gung-Ho.
Spreading The Disease is a winner.

They got a foot in the door with their first album, Fistful Of Metal. With the follow-up they kicked it wide open. Spreading The Disease was an explosive record with which Anthrax asserted their authority on the thrash scene.

New singer Joey Belladonna was an upgrade on Neil Turbin, with more control as well as power. Equally, the band’s songwriting moved up a gear; Madhouse and Medusa, with slower, chugging riffs, were as catchy as they were heavy, and in Armed And Dangerous an atmospheric intro had Belladonna channelling Ronnie James Dio before a frenzied thrash onslaught.

video review of the album:

video review of the album: 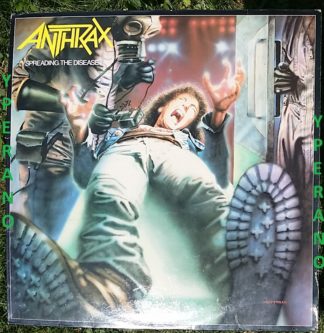