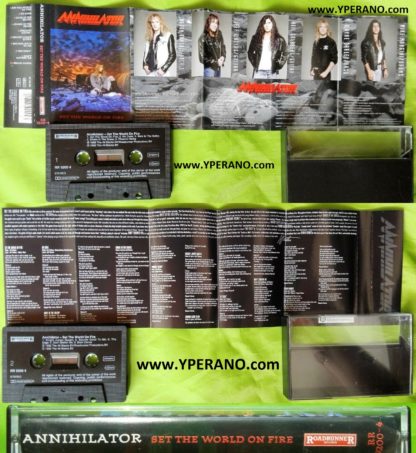 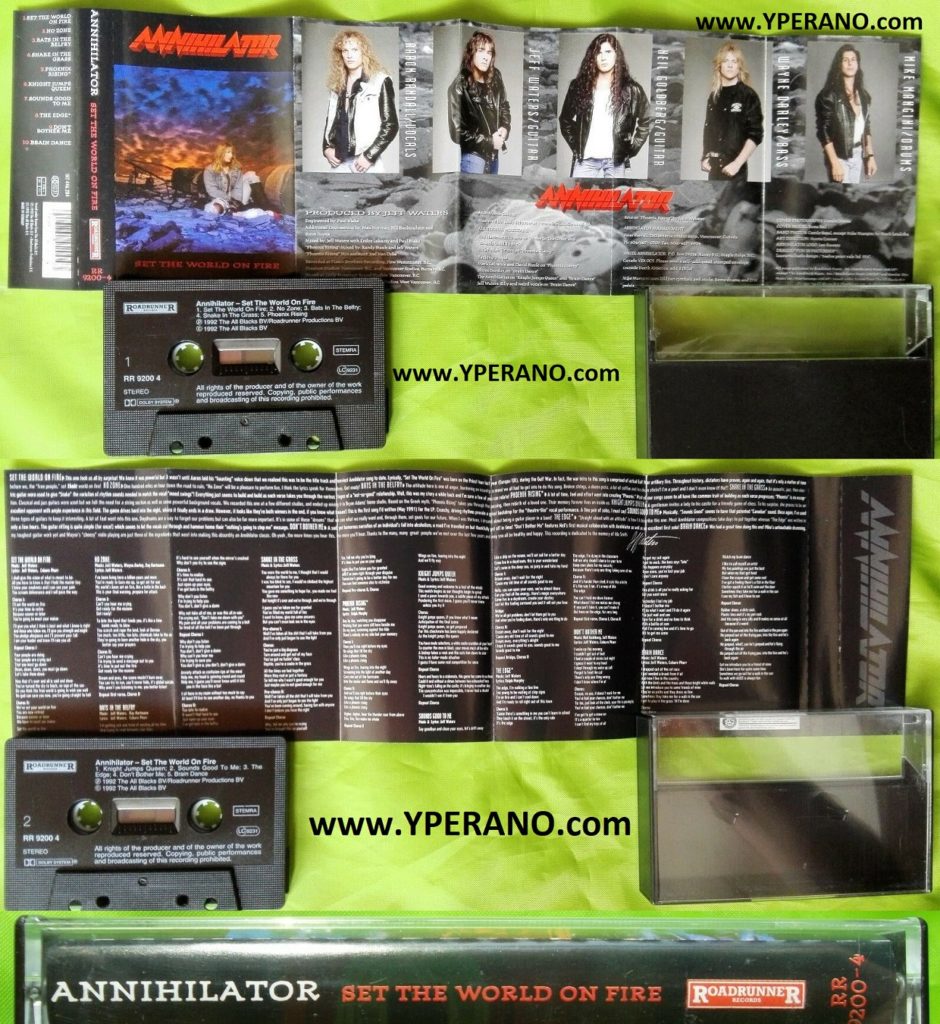 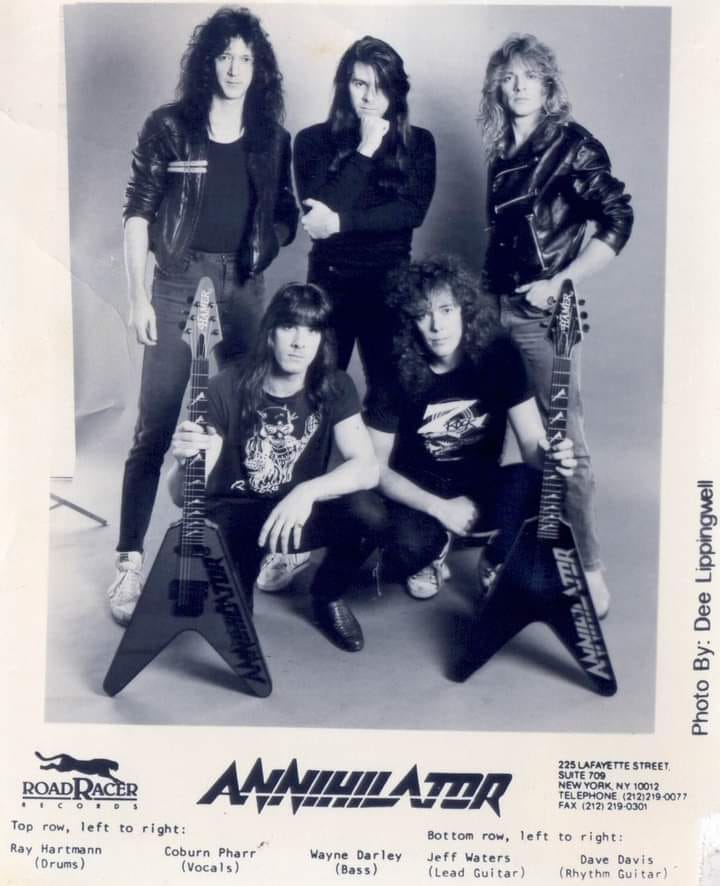 This is Heavy Metal of the best kind. It marries heaviness, melody, humour and cool solos into ten enjoyable pieces of music that just feel right and very well put together. Guitar wizard Jeff Waters conjures intricate and surprising riffs and solos throughout the album and I’ll never get bored while listening to him.
The band has left some of the Thrashier elements from their two first albums behind by slowing slightly down and focusing a bit more on melodies. The band still goes all out on several occasions and Set the world on fire is a very varied album. Musically you get everything from guitar-frenzied Heavy Metal to beautiful ballads. Lyrically tongue-in-cheek humor goes hand in hand with songs about political issues, the environment, personal struggles, death, dreams and love. The album has an air of freshness to it that lingers on, even today. Basically this is music that can take a lot of listens and still be enjoyable.
Sometimes Annihilator, with this album, remind me of older Savatage in the way that the music is built with simple means, flows extremely well and leans upon a brilliant guitarist.
New vocalist on the block is Aaron Randall and he fits these songs very well, being able to pull both melody, feeling and energy out of his voice. One thing that annoyed me for a while, but I eventually got used to it, is the production on his voice. His voice often has a weird hiss to it that makes it sound like he has mutated with a snake or something.
The album opens with sounds of artillery fire rising in the distance along with a bass and guitar melody, increasing until an intense and heavy machine-gun-riff takes over. Aaron’s voice has a little echo or maybe it is just a little layered and this gives it an increased sense of anger. The drumming of Mike Mangini very well adds to the intensity of the main riff. A good opener that will lay waste to any dictator’s living room.
The more straight ahead No Zone is a fast and furious speed metal trip that grips the listener hard and doesn’t let go. The guitar work is all over this one. The opening to Bats in the bellfry reminds me a little of Thorazine shuffle by Savatage with the same slightly unsettling mood in the beginning.
Snake in the grass starts off with acoustic guitar and the story of a broken relationship. The song nicely builds up emotion before letting it rip in the chorus. The guitar in the final chorus is a good addition and this is definitely a song that gains on repeated listens.
Phoenix rising is one of those sweet ballads that even your pop-loving sister will like (well, mine did). Beneath the seemingly simple exterior you will find a beautiful song that lives on and on. It is delivered in a convincing way and I know I will never tire of it.
Jeff Waters’ sense of humor shows itself in Knight jumps queen with some clever lyrics. The bass line adds great tension to the already intense riff and Aaron sings the song with a style that draws you right into the fray. From the opening guitar slaughter to the final withdrawal this is a song that can be described with just one word, cool.
The band is extremely tight, in no small part due to Mike Mangini [Dream Theater current drummer] on drums and Wayne Darley on bass, making the songs feel very compact. No time is wasted on long winded solos or build-ups. Everything is straight to the point.
The savoury Sounds good to me is my favorite song here. The dreamy guitar playing will draw you into the song instantly and it fits very well with the soothing lyrics. The guitar sound is just perfect as is the solo near the end. A warm and fuzzy song (If that is a way to put it) that basically just sounds good to me.
The edge has a cool feel to it and stands out as a classic “”Live your life be free”” message. When the two choruses merge together in the end the feeling is good. A simple rocker with a nice down-to-earth feel to it.
Don’t bother me is a fast paced song with some ironic lyrics that relate the sadness of descending into alcoholism. I find it interesting that Annihilator use the phrase “”Tic Toc”” a decade before Metallica decided to abuse it in Frantic from their St. Anger album, a song about getting over alcoholism… Now here’s a theory, is this song really a day in the life of James Hetfield in the year 1993?
Ending the album on a, shall I say, freaky note, Brain Dance is a far-out song that just works on every level. From the opening alarm clock through the frenzied guitar work and the theatrical Queen-like middle play which even throws a wonderfully quirky violin into the mix, to the final feeling of descending into the hell of insanity, this is all strikingly unconventional. The guitar work in this song is some of the best on the album and worth the admission fee in itself. All kinds of images fly through my head while listening to this song and it is one of the few songs which I will honor with the Monty Python definition of silly! This song is very silly indeed.

So, a highly varied collection of songs makes for an awesome album that is still worth listening to today. They just don’t make music like this any more. 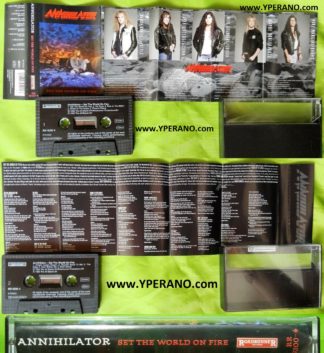