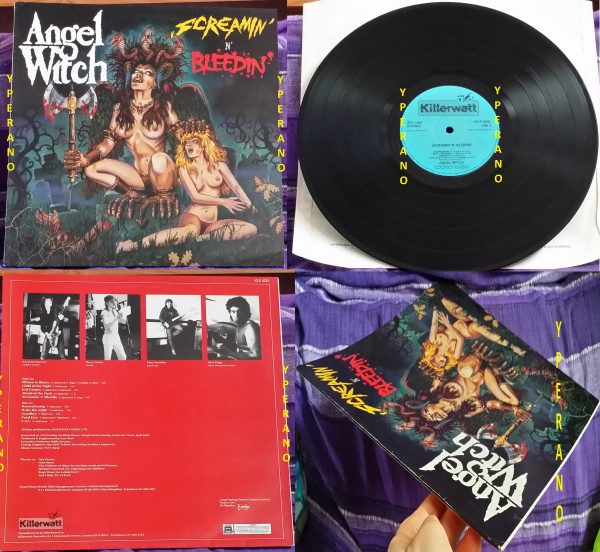 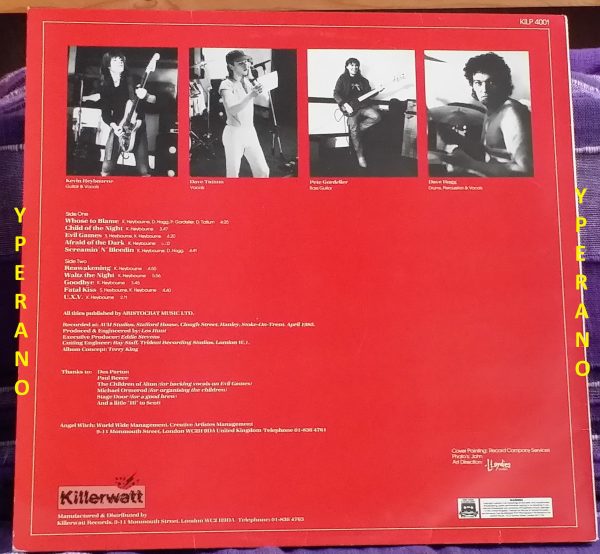 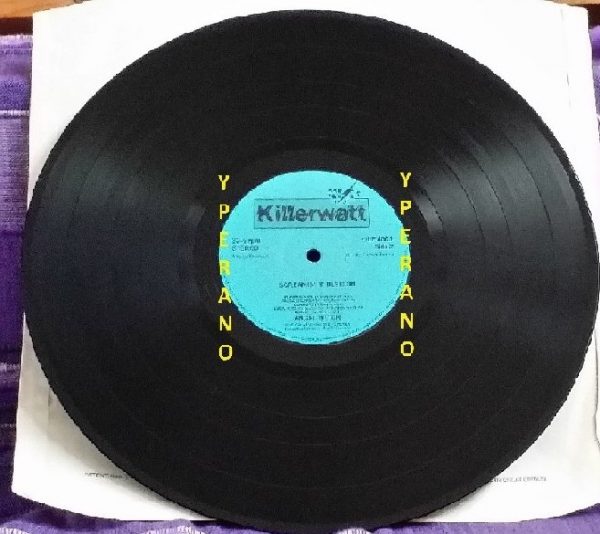 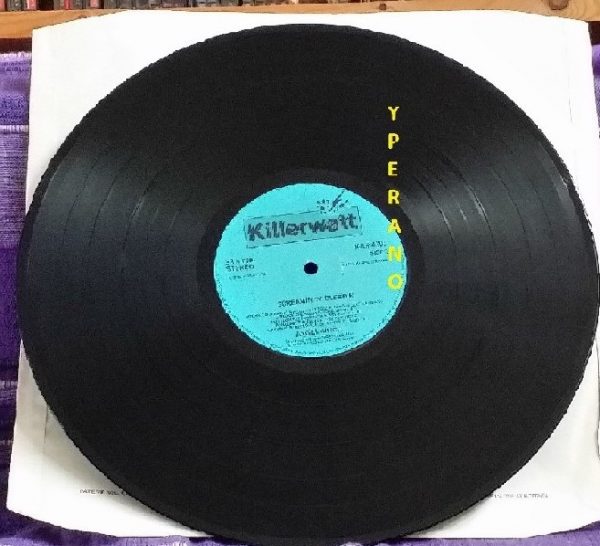 Screamin’ ‘n’ Bleedin’ is the second album by British heavy metal band Angel Witch. The album was released in 1985 through Killerwatt Records. Even though this is the second release of the band, it is the first release with the new line-up of 1984, after the split-up in 1981.
Contents Track listing

All songs written by Kevin Heybourne.

Progressing in the right direction! – 98%
Where do you go when your début album is a masterpiece? How do you follow that up? The answer is, you can’t. You can never top your best. You can come close but you’ll never reclaim what you had. This is the case with Angel Witchs sophomore album screamin’ n’ Bleedin’. However in saying that, its still an incredible album that shows the band in a new light. Gone are the rough edges and unpolished surfaces of before, replaced instead with a smooth polished veneer that is both progressive and commercially sound. Also, the addition of a real singer makes it much easier to digest.

The production is better but still pretty raw for its time. The guitars are still heavy, but they’re mature and well weathered. The songs are as sleek as the melodies. The solos are more controlled and thoughtful. The riffs are immense without being pretentious. There is an underlying darkness that wasn’t in the first recording, subtly permeating while sublimely overwhelming in a direct yet underlying tone. There is a little more palm muting to open chorded parts but this simply adds a new dimension to the music as a whole.

The bass is perhaps a little more stepped up. The drums are once again in the same boat as the bass and effective for what they are.

Dave Tattum was an excellent choice for a singer. Hes similar in tone to Heybourne, but more professional. Its hard to tell if hes been trained or not but regardless he effectively sets the tone for each song. His vocals are mid to lower ranged for the most part. He has a tasteful grasp of his vibrato and doesn’t showboat. He does hit a few highs here and there but stays in the mid for the bulk of the album. The lyrics are perhaps more serious but good all the same. Daves vocals float around various haunting passages, making some of darker songs even creepier (see ‘Goodbye’).

Heybourne has said that he wasn’t as pleased with this recording because its more commercial than the bands debut and this is correct. But, just because its more accessible doesn’t take away from its appeal. Its more simplistic in its presentation than its predecessor but just as effective in getting its point across. Had the band continued down this road they perhaps would’ve been bigger in the long run. This album is easily more in the Traditional vein of things than being a pure NWOBHM release. Either way this is worth hunting down as its amazing.

A Solid Followup – 86%
A more than worthy follow up to Angel Witchs excellent début. Although taking five years to come out due to problems inside the band, this release manages to almost be as good as the previous and there are even a few notable improvements.

The album starts off with one of the best songs on the album, ‘Whose To Blame’, which begins with some strange noises and erupts into a headbanging midpaced riff. When the vocals come in it is easy to notice an improvement in this department, as Angel Witch got a new singer for this album who, in my opinion, is better than Kevin Heybourne. The chorus is quite catchy and there is an above average solo 3/4s through. A good track to start the album with. ‘Children of the Night’ slows down the pace a little with an equally good riff as the previous featuring. It pretty much follows the same structure as the previous track, and the same things can be said about it. The solo is merely average however, which drags the song down a bit.

‘Evil Games’ is up next, which is faster paced and contains some great melody lines. It also has some nice soloing after each chorus, which is significantly better on the second chorus. The only down side to the song it the kids singing ‘evil games’ at the end, but it is only a small fault. Next up is a ballad, which has a great atmospheric solo to start things off with. It is made up of acoustic verses and heavy choruses with some more excellent soloing thrown in. The song as a whole is very effective and the vocalist sounds in top form. While ballads can often be the low point on albums, on here it is actually among the best of the songs.

The title track is next, and is one of the faster songs on the album. The vocalist is, once again, in top form, with him pretty much nailing the vocal lines perfectly. The under verse riffs are great, the chorus is extremely catchy and the solo in the middle is impeccable. Definitely the highlight of the album. ‘Reawakening’ has a great, ‘rocking’ intro riff where it turns into a slower, heavier riff. However, the intro riff is really the best part of this track, as the rest of it is pretty much average, the chorus in particular. The solos save it from being a bad song, but it would’ve been much better if the track as a whole was of more quality.

‘Waltz the Night’ is slow and plodding. When you first hear it you expect it to turn into something awesome, and that the riff is just an intro, but it continues throughout the song. Even the solos are mediocre, mostly consisting of random noises, and despite a spirited vocal performance, it is quite bad. ‘Goodbye’ is the second ballad I suppose, and is about some guy breaking up with his girlfriend. While not being as good as the first ballad, it is an increase in quality from the previous song, and is fairly enjoyable. An emotionally driven solo finishes off the track well.

‘Fatal Kiss’ is where the album picks up to its original pace again. It speeds up halfway through to lead into a solo. While the chorus is a bit unimaginative in terms of the lyrics, this doesn’t detract from its catchiness in any real way. If it weren’t for the faster parts, however, the song would be on par with the previous track. UXV is some sort of outro, mainly consisting of some random noises over two piano notes which are repeated throughout the song. It doesn’t really do anything for me and I usually end up stopping the album at ‘Fatal Kiss’, but because it is an outro it doesn’t lose the album any points.

The production is mainly what you would expect for 1985. The guitar tone suits the songs well, and is pretty heavy (and not in the downtuning sense of the word). The instruments are mixed well, except for the bass, which I assume follows the guitar lines anyway because I can barely hear it. As anyone who has heard a song by Angel Witch would know, the guitarist in particular is highly skillful, although his solos on here aren’t up to the standard he set on their debut. The drummer is fairly average, and does some nice drum fills at times. The vocalist is really good, and prefers to sing in a lower pitch.

In conclusion, while not being as good as the debut, this is still a solid NWOBHM release and a great follow up, despite dropping in quality a bit in the middle. I fear that a lot of people skip this over in favour of the debut, which is a shame really as this album deserves the recognition that the s/t got.

DURING THE halcyon days of the NWOBHM, I was one of the few critics who could find something endearing to say about Angel Witch. I still believe that with proper management and record company support, the three-man demolition line-up of Kevin Heybourne (lead guitar/lead vocals), Dave Hogg (drums) and Kevin ‘Skids Riddles (bass/. vocals) would have been massive in various Metal strongholds.

As it is, history dictated against such success. The band finally split in ‘81 leaving me with a trail of damp memories. However,’ such has been the failure of the various members since then to make any impression that Heybourn and Hogg are now back together, this time with bassist Pete Gordelier and, vocalist Dave Tattum under the revived AW monicker.

5.0 out of 5 stars Ever Wonder What Evil Sounds Like?,
The sound of evil, simply put, is Angel Witch, pure and undiluted. This is the British metal bands second album from 1985, and its every bit as worth checking out as their mind-blowing debut from 1980. Far too few metalheads know about Angel Witchs first album, but even fewer know about this one.

I present to you Screamin’ and Bleedin’, re-introducing Kevin Heybourne, the guitarist and original creative force and vocalist of Angel Witch, and Dave Hogg, the original drummer of the band. There are also a couple of new additions here: bassist Pete Gordelier and vocalist Dave Tattum, both of whom fit in most excellently with Angel Witchs sound, enhancing the dark atmosphere that this band thrives in. While Kevin handled both the guitar playing AND the singing in the debut (and did a magnificent job), there couldn’t be a better alternative vocalist than Tattum. He conveys the despair and agony Angel Witch fans love, and delivers almost as good as Kevin did on the debut. However, Kevin still sings a few verses here and there, delivering all the spine-chilling sensations we’ve come to expect from him in the title track, as well as in a few other places.

There is very little filler here, and satisfying variety. From the crushing march of “Waltz the Night,” to the sweeping, creepy rush of “Whose to Blame,” to the ghostly lament of “Afraid of the Dark,” Screamin’ and Bleedin’ boldly continues the atmospheric, haunting, goose-bump-inducing perfection that the first album started. The vocal and guitar melodies are infectiously eerie and sublime, as usual.

I recommend listening to this album on a dark, foggy night under a full moon. Don’t miss out on this one, metalheads.