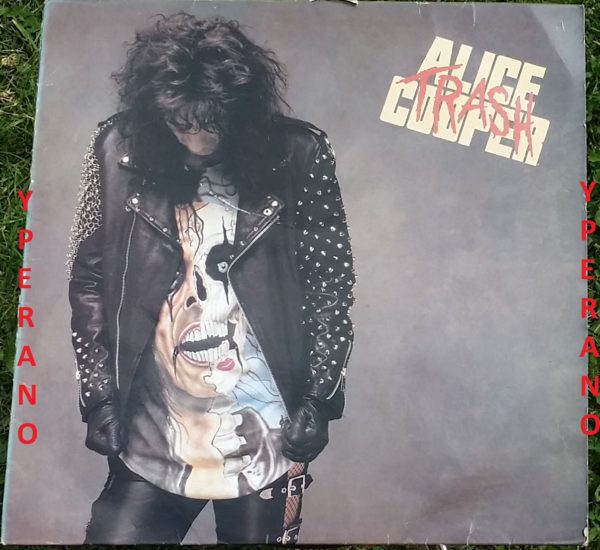 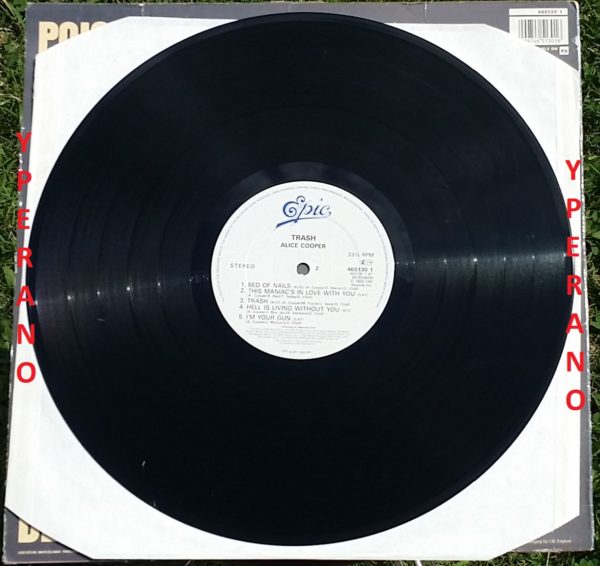 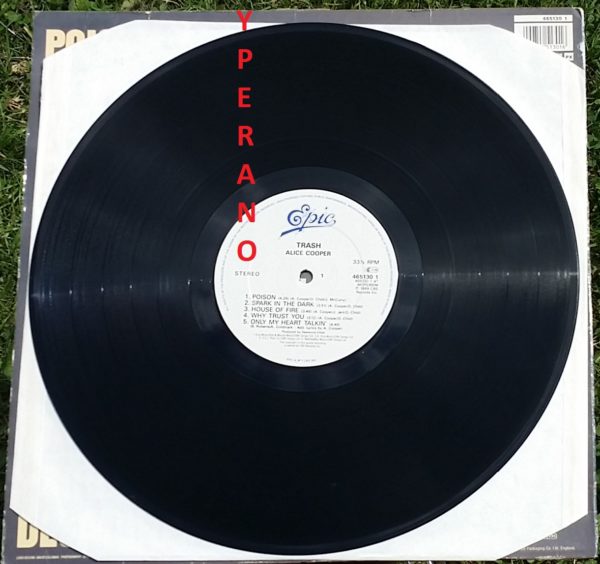 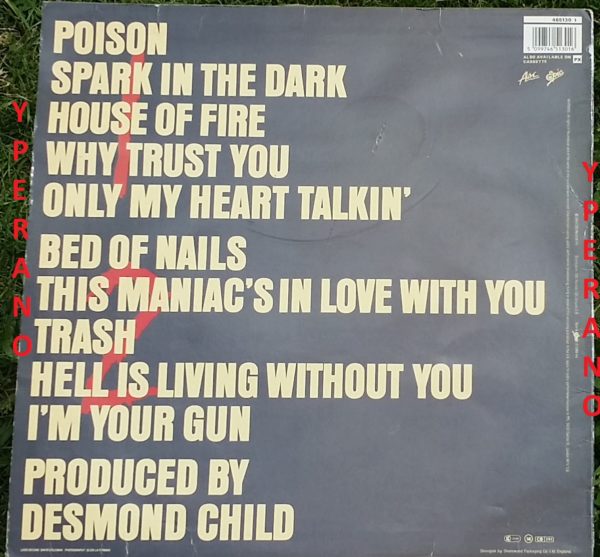 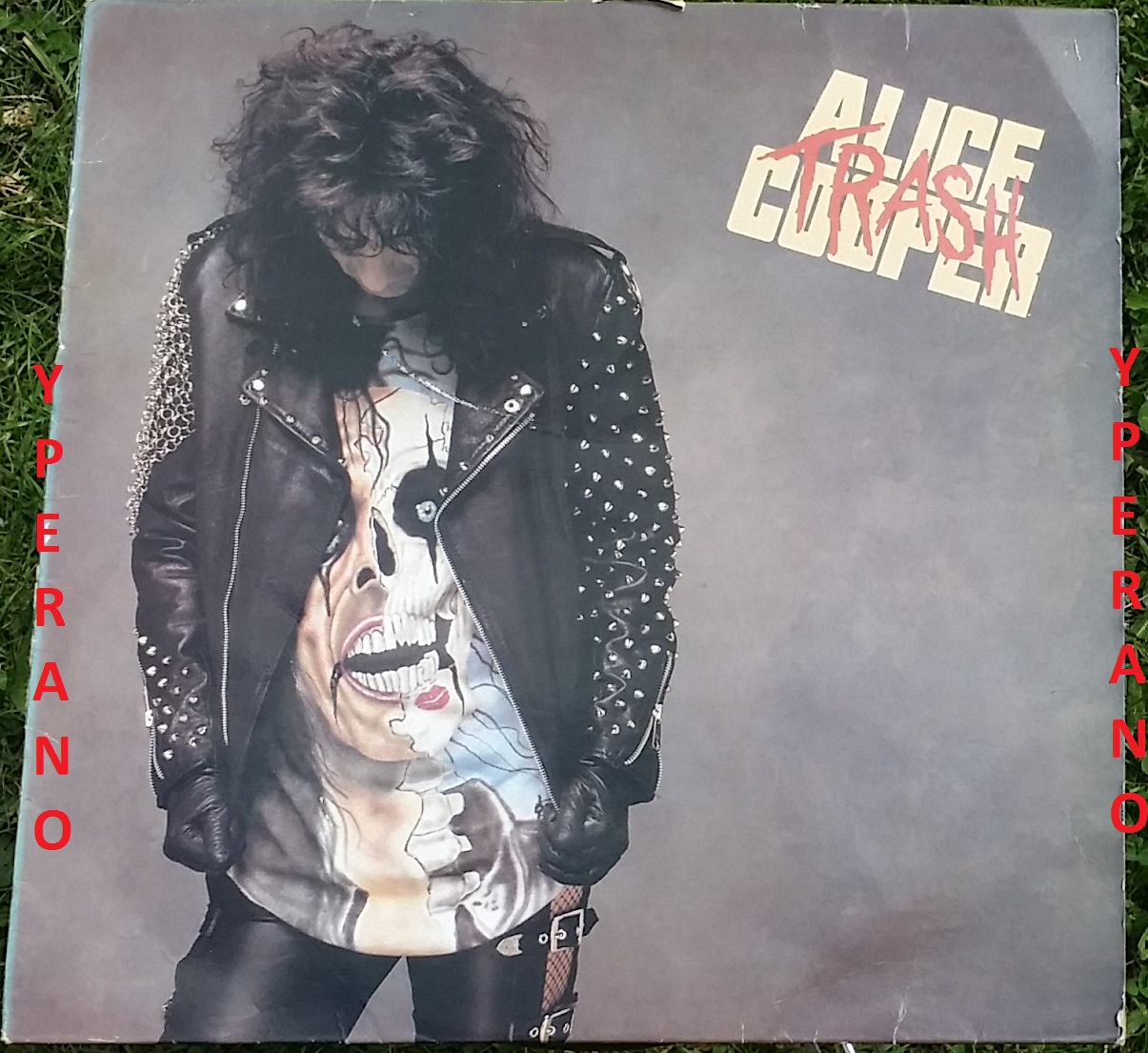 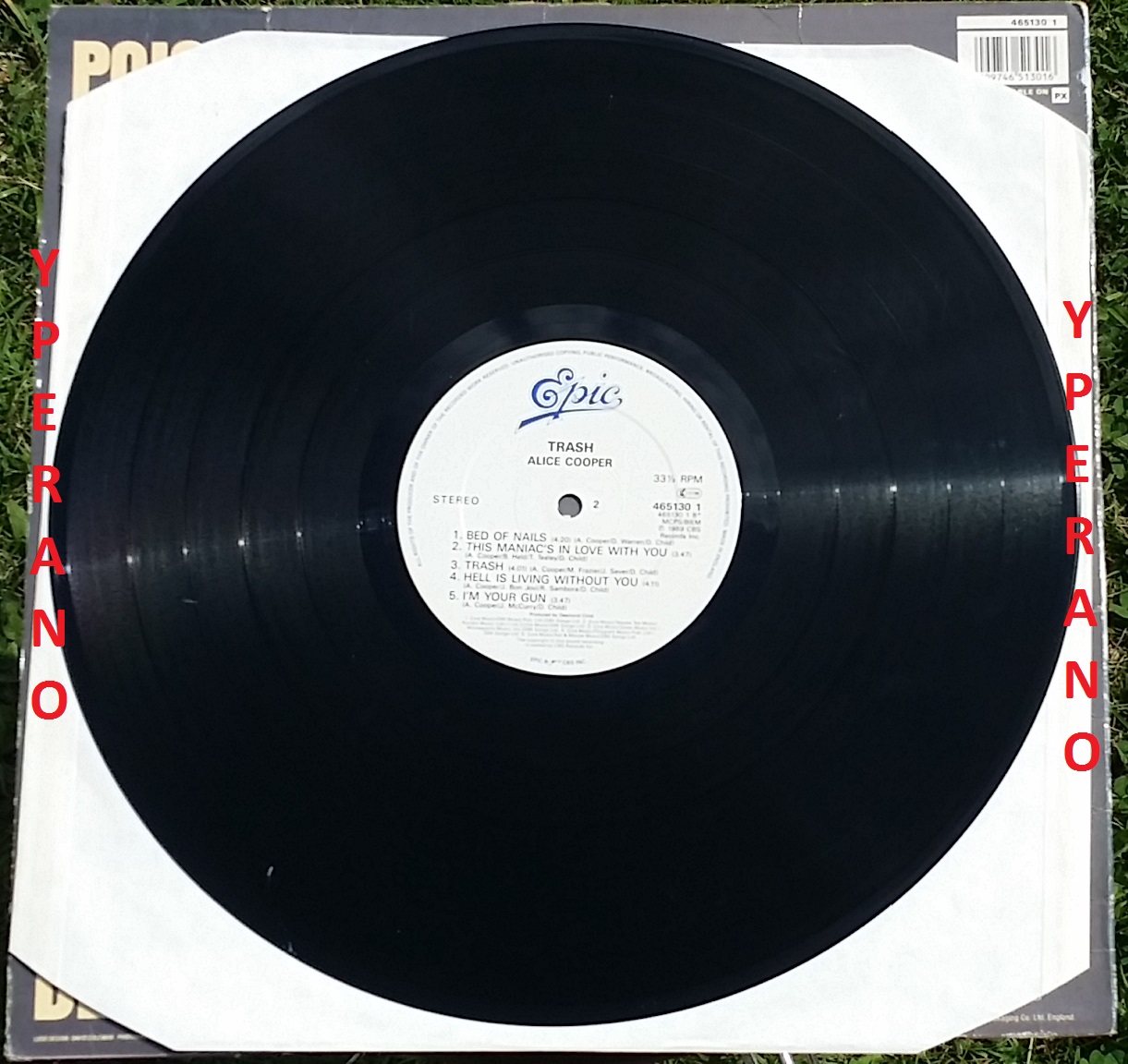 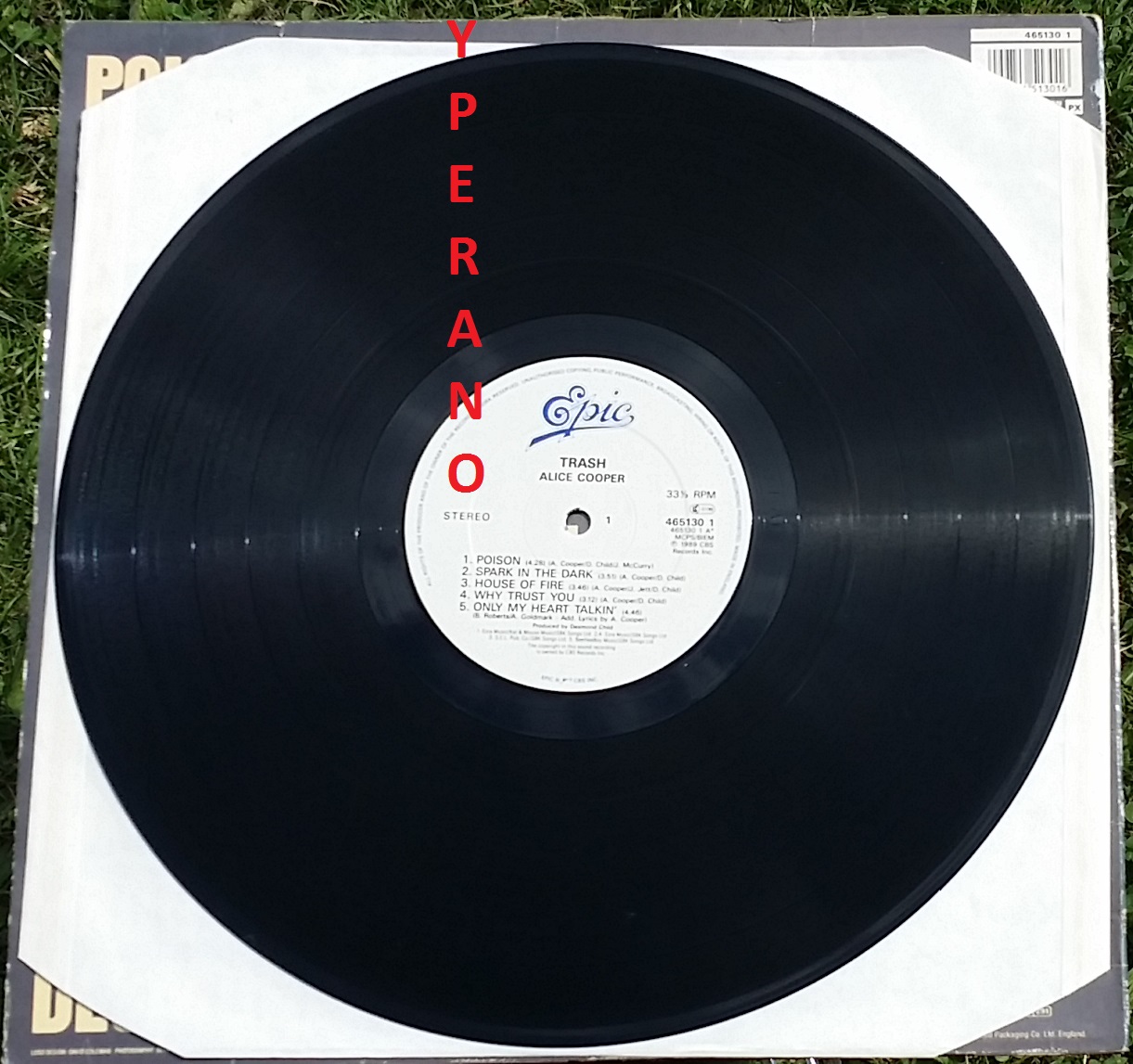 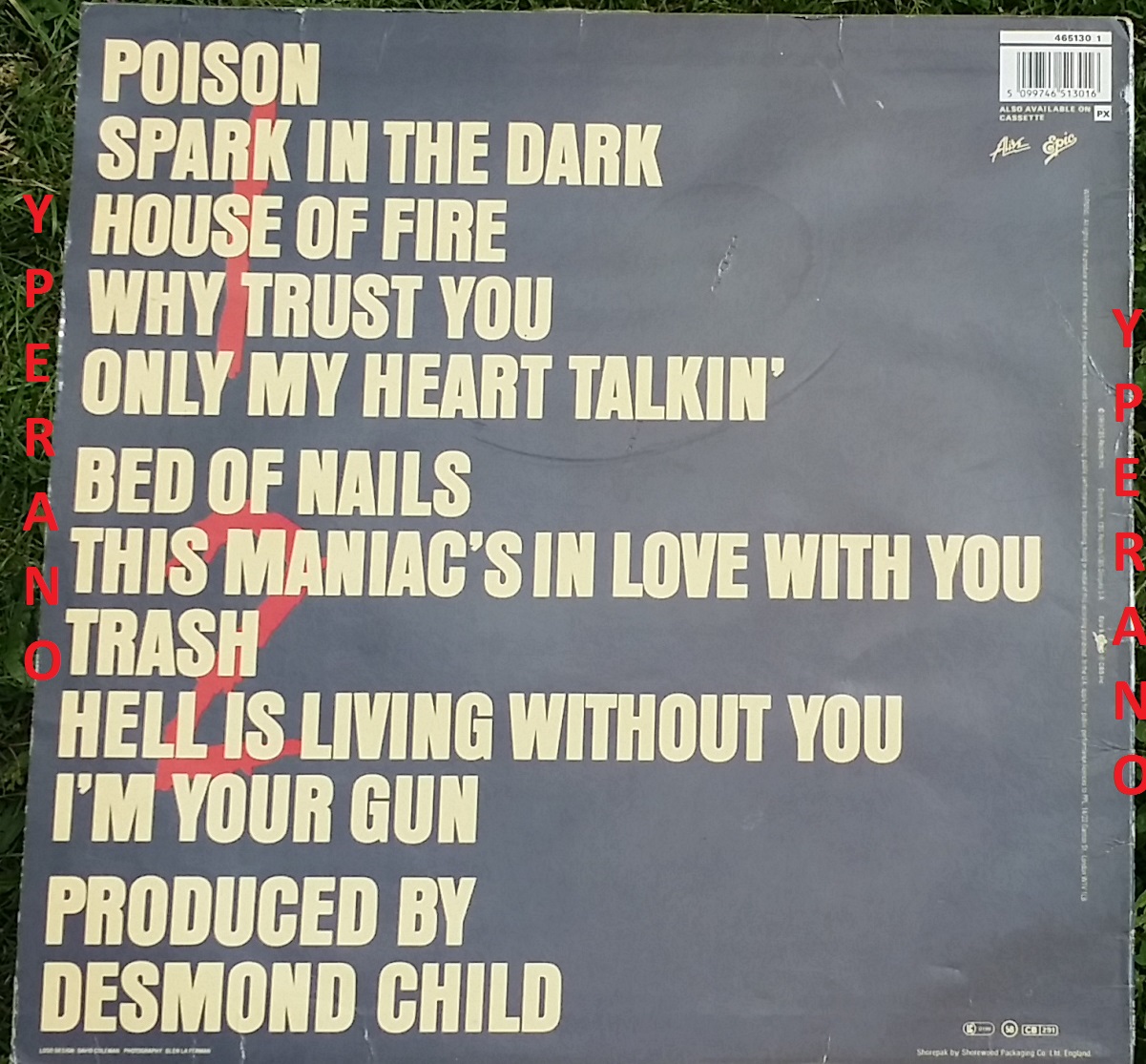 Trash is the eighteenth studio album released by Alice Cooper in 1989.

The album featured “”Poison””, Cooper first top ten hit since his single “”You And Me”” in 1977. After Alice return to the music industry in 1986 with the successful tour “”The Nightmare Returns””, Cooper had sought assistance from Desmond Child to create a comeback album. Trash became one of Cooper biggest albums, accompanied by music videos for “”Poison””, “”Bed of Nails””, “”House of Fire””, and “”Only My Heart Talkin'””. A successful year-long worldwide concert tour in support of the album was documented in the home video release Alice Cooper Trashes The World. Additionally, much of the album conveys a sexual theme.

‘Poison’ is one of Alice Cooper most well-known songs, and provided his last major mainstream hit, in 1989. It was taken from his album ‘Trash’, which was produced by Desmond Child. The whole album sounded more commercial and radio-friendly than previous Cooper albums, which may account for its success. The single reached number 2 in the UK, number 7 in the USA and number 10 in the Dutch Top 40. The music video for ‘Poison’ was available in two versions. Model Rana Kennedy wore nothing but a black thong in the original video, so a more modest version was filmed in which Kennedy wears a corset to cover her upper body.

Alice Cooper spent most of the ’80s looking for a hit, but with his 18th studio LP, Trash, the groundbreaking shock rocker promised “less gore, more MOR.” He delivered, too, with a million-selling smash that resuscitated his recording career.

Released on July 25, 1989, Trash was fronted by “Poison,” Cooper’s first pop Top 10 hit in over a decade, and accompanied by a successful tour that found him barreling through American cities behind the wheel of a garbage truck. After years of putting out records that failed to chart in the States, he couldn’t hide his excitement over his change in fortune.

“Certain people ought to be aware by now of what Alice Cooper is and what he does. But there is a whole new audience out there,” he enthused in the months after the album hit. “There are kids who come up to me on the street who think Trash is my first album. But then I’ll be up onstage and there’ll be a 15-year-old who knows every word to ‘The Ballad of Dwight Fry.’ There are certain kids who totally disregard any of the heroes of the ’80s. And these kids are very aware of who Alice is – and it’s great.”

It proved a particularly sweet vindication for Alice Cooper, who’d recently walked away from MCA after a pair of disappointing LPs and set out to put together a big hit record for his new label, Epic – starting by hiring one of the hottest writers and producers in rock, Desmond Child. “I would get into my Corvette, turn on the radio and hear all these great songs by Bon Jovi and Aerosmith,” Cooper explained in 1989. “When I found out how many Desmond had been responsible for, I knew he was the man to get. … I compare this album to [1973’s] Billion Dollar Babies. It’s the closest I’ve ever been to recreating that style. The music is right up front, right in your face. But I think this an album for the ’90s. It’s a little more intelligent.”

The sessions found Cooper fronting a new band that included guitarists Al Pitrelli and Pete Freezin, keyboard player Derek Sherinian, bassist Tommy Caradonna and drummer Jonathan Mover – a lineup that, as he later pointed out, brought together a blend of fresh faces and highly recommended personnel.

“I called up Steve Vai and said, ‘I know you’re taken, so tell me who the next best is,'” Cooper said of his search for a new guitarist. “He said Al Pitrelli. So, as soon as I got him [David Lee] Roth calls up and says, ‘Did you take that guy?’ ‘Cause he wanted him, but I had him, ha!”

The rest of the group coalesced from far-flung origins, according to Cooper. Calling the Toronto-based Freezin a “young version” of his former guitarist Dennis Dunaway, he noted, “It’s scary how much he looks like that. He plays all the classic material like ‘Muscle of Love’ and songs we haven’t done onstage for years like ‘Gutter Cats vs. the Jets’ – all this early stuff, he plays it exact. And if I go off-course he goes: ‘No, no, it goes like this.’ Al, on the other hand, is much looser. He flies around the stage.”

Adding that he found Caradonna through Lita Ford, he admitted that he drew a blank when it came to his new keyboard player. “I don’t know where he’s from,” laughed Cooper. “With a name like Sherinian, he should be my dentist.”

The record also included a number of high-profile guest appearances, including vocal cameos from Jon Bon Jovi and Aerosmith’s Steven Tyler. “I wanted Jon to sing on ‘Trash,’ because none of the stuff he ever sings is as nasty as that,” Cooper laughed, referencing the track ‘Hell Is Living Without You,’ a co-write between Cooper, Child, Bon Jovi, and Richie Sambora. “I wanted him to sing on something that he wasn’t allowed to sing on his album.”

When it came time to find a supporting voice for the song “Only My Heart Talkin’,” Cooper said, “I think Steven Tyler has the best voice in rock and roll. During our heyday in the ’70s, we were always too drunk to work together. I finally called Steven and he loved the song, so we went to Boston, sat in the studio for about eight hours and had fun. I sang as high as I possible could, and he was up there, even higher. That’s one vocal I would not want to have to do again.”

All that firepower combined to bring Cooper back to the Top 40 while introducing his music to a new generation of listeners. “There’s nothing wrong with radio-ability,” he argued. “When I was at my biggest, I had records in the Top Ten. There’s nothing wrong with having a commercial record out, because commercial is as good as you make it. And what’s wrong with commercial anyway? Everybody’s trying to get on the radio. Besides, the new album doesn’t sound like Tiffany! It doesn’t sound like Bomb the Bass! It sounds like Alice Cooper; it’s my version of what commercial is.”

Of course, Alice Cooper had tried different spins on “his version” of commercial viability in the years between his ’70s hits and Trash, and few of them panned out. Prior to this surprising comeback, he hadn’t had a Top 40 album in the United States since 1976’s Alice Cooper Goes to Hell.

“A lot of those things backfired,” Cooper admitted during a 1987 interview with Creem. “Like me showing up on ‘Hollywood Squares’ was great. It was on purpose. The same woman who wouldn’t let her kid come to one of our shows was on there trying to win a car. And I was sitting there, thinking ‘This is great.’ But the audience didn’t get it. They thought I really wanted to do that. They thought I had been Alice Cooper to get to the position so I could be on ‘Hollywood Squares.’ The same with the golf thing. It ends up that every heavy metal guy I know plays golf now, from Motley Crue to Iron Maiden. But if I play golf, it’s a cardinal sin because I represent all that is not parents.”

Aside from television and golf, Cooper conceded that a growing dependence on ballads helped wreck his transgressive image. “I’m a hard rocker from Detroit. I’ll always be a hard rocker,” he said. “When the ballads came out, I can understand how people thought that was a sellout. But it was the only way I could keep my hand in the game during disco, because they wouldn’t play my records or Aerosmith or anyone in that genre of rock ‘n’ roll on the radio then. Anything with a guitar was out. So we did ballads, which was like a hand in poker. You had to keep your hand in the game, even if it was a losing one.”

With Trash, Cooper found a way to balance radio’s demands for softer stuff against his own artistic point of view. And rather than outright buying tracks from outside songwriters, he co-wrote every cut on the album, working with a list of talented tunesmiths that included Joan Jett, Bruce Roberts and Andy Goldmark, and hitmaker-for-hire Diane Warren. Even if, at 41, he seemed like an unlikely idol for the MTV generation, he was already making plans for future decades of musical domination.

“When I get too old to do this, 55 years old or so, I’m going to create a new Alice,” Cooper mused. “I want Alice to go on like the circus – for generations. Maybe there’ll be like 10 Alices.”