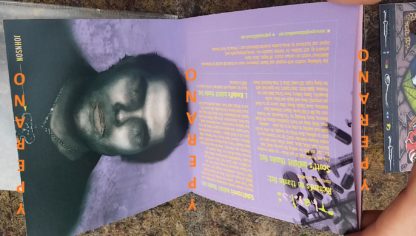 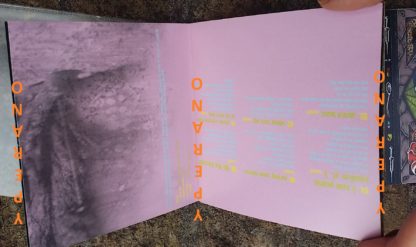 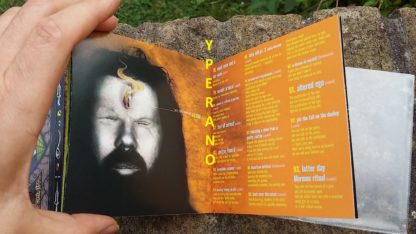 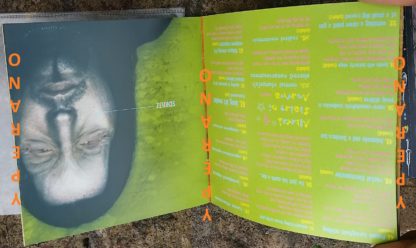 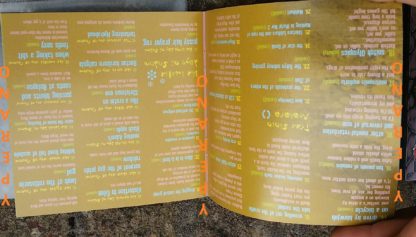 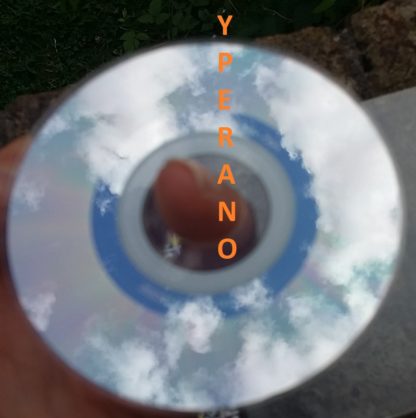 Since the essence of grindcore is speed, it only made sense for the members of Agoraphobic Nosebleed to go ahead and recruit themselves a drum machine. Its use has allowed them to craft an inhuman assault that flays the senses and leaves the listener drunk with future shock. The three-inch CD, ALTERED STATES OF AMERICA (2003), may be their ultimate vision. Coming in at 100 tracks, none of which is over a minute, ALTERED STATES crams an unthinkable amount of sheer punishing velocity on one mini-CD.

AGORAPHOBIC NOSEBLEED ‘Altered States of
America’ is 100 hits of pure acid-grind! Delivering completely inhuman music
with a complete disregard for the listener, this limited-edition 100 song 3″” CD
instantaneously shatters your nerves and makes a bull’s-eye of your mind. Round
after round, clip after clip, ANb unloads an arsenal of stupefying guitar work,
experimental noise, and drum machine-gun blast beats while swarming vocalists
hatefully taunt you into the crossfire. DIE AND GET THE F*CK OUT OF THE
WAY!!

5.0 out of 5 stars MOST IMPORTANT PIECE OF ARTWORK EVER CREATED IN ALL HISTORY!,
this is the most incitefull and emotionally powerful CD ever made. there is nothing but love and good feelings all over this album. the lyrics really made me wanna go out and make a difference in my community. i would’ve liked to see less love ballads and a little more brutality, but overall, i think there’s good moral lessons to be learned on this album that should be taught to children. in fact, i strongly suggest parents make this a staple in their young, developing child’s life. i think it’s important to teach society about the values espoused by agoraphobic nosebleed. they have shown us through intelligent, insightful, polite, and generally good-natured lyrics that being good to each other is the most important thing we can do with our lives. if i was president i would have everyone locked in a box with just this CD playing over and over for eternity.
————————————————————————————————-
5.0 out of 5 stars Mental madness,
Well, i can’t say I wasn’t warned. I bought this CD knowing that it was 100 tracks, i knew it was 20 minutes long, i knew they used a drum machine because the beats are THAT ridiculously fast, i knew that the sole purpose of this album was to actually harm the listener, or at least to scare them silly.
But I wasn’t expecting this.
After putting the little baby CD into my stereo, and the strange electronic intro (gotta rewind the CD to hear it), i found myself practically pinned to my chair by the 20 minutes of grinding, blasting noise coming out of my speakers. I actually felt I had to duck at some points else this music would take my face off. I was in pain, and I loved every second of it. An average song length of about 8 seconds doesn’t allow you to really settle down into any sort of groove or hook. You’ve basically gotta put this on and strap yourself in for the ride.
You think Pig destroyer are extreme? Anaal Nathrakh? (You see, its not like i wasn’t prepared) Well Ok, they are extreme, but Agoraphobic Nosebleed seriously have set the bar for extremity at an unnatainable high.
If you’re still even vaguely interested in this band after i’ve said all this, then you MUST buy this album. Its an experience you won’t want to miss.
————————————————————————————————-
5.0 out of 5 stars renders regular metal obsolete, slays all really!,
You do not possess a record like this. I haven’t found another band like them. It’s a psychedelic grindcore monstrosity. It feels like a concept triple album, with each concept/album lasting about 8 mins long! Give it a few plays. It takes over your life. Grindcore as mindcontrol? Just buy it, tell them Mark sent you.
————————————————————————————————-
5.0 out of 5 stars buy this cd,
This review is from: Altered States Of America (Audio CD)
100 songs of grind/noise/10,000 bpm drum machine induced insanity.
you wouldn’t believe how much noise a tiny 3 inch disc can actually make but this is way beyond extreme. their former albums are nothing compared to this.
buy this dammit!
————————————————————————————————-
5.0 out of 5 stars pure beautiful noise
straight off the bat this album is an assault on your hearing. no let up through out. Grindcore at it’s best. no stand out songs as this album doesn’t have songs. just a barrage of noise cut up in 99 segments. excellent stuff
————————————————————————————————-
5.0 out of 5 stars Wow!!!!
As soon as I got this CD, I put it straight on repeat! And what a CD it is! Crushingly heavy guitars going out of control, noise and samples to boggle your mind, and the token machine-gun drum machine drumming! At only just over 21 minutes you should decide whether you want quantity as well as quality, which this CD sadly hasn’t got, but after 21 minutes you’re head feels like it could explode anyway.
Best tracks for me are 4 Leeches (40000 Leeches) and Baby Mill parts 1 and 2.
Buy it, its the maddest thing you will ever hear.” 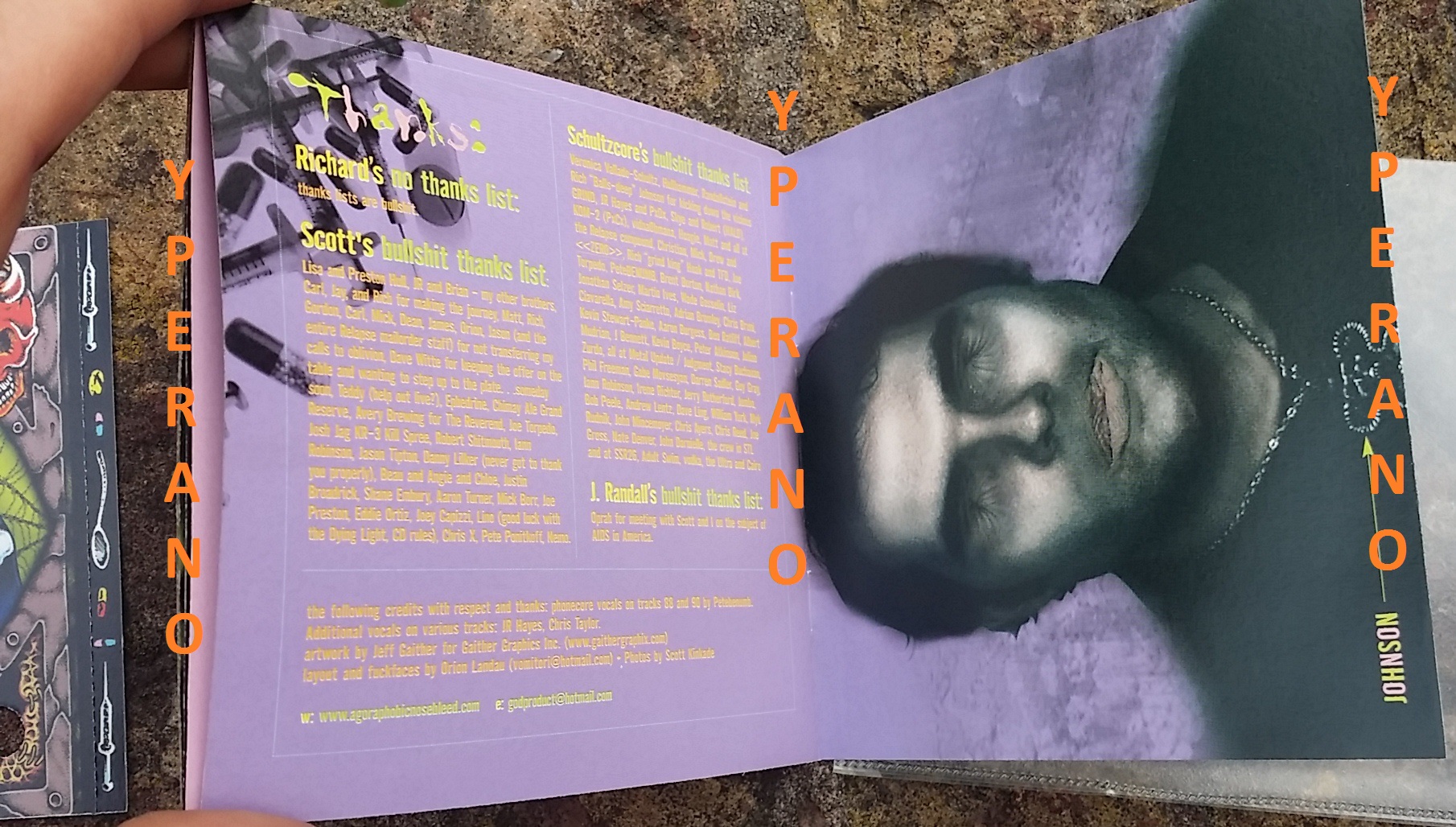 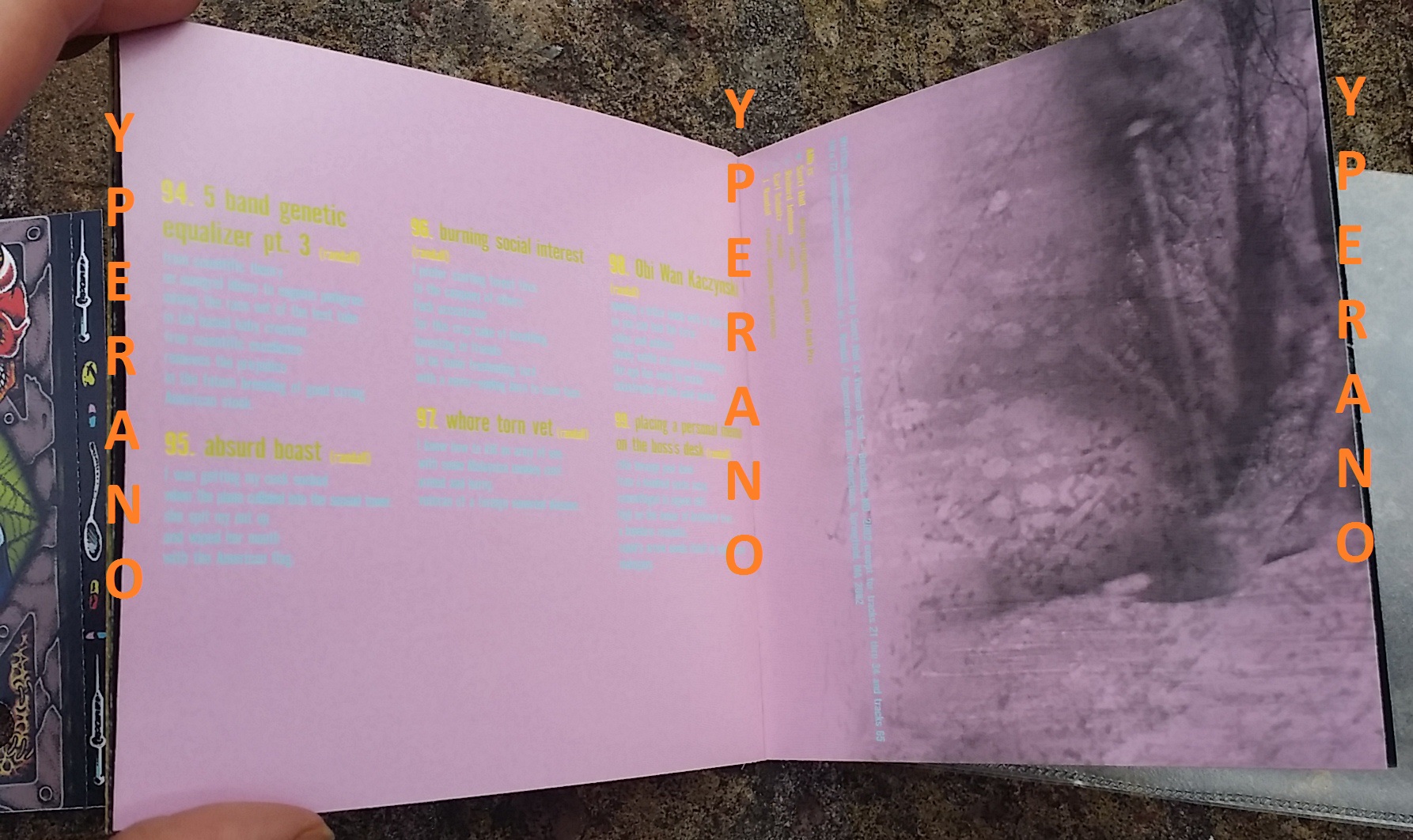 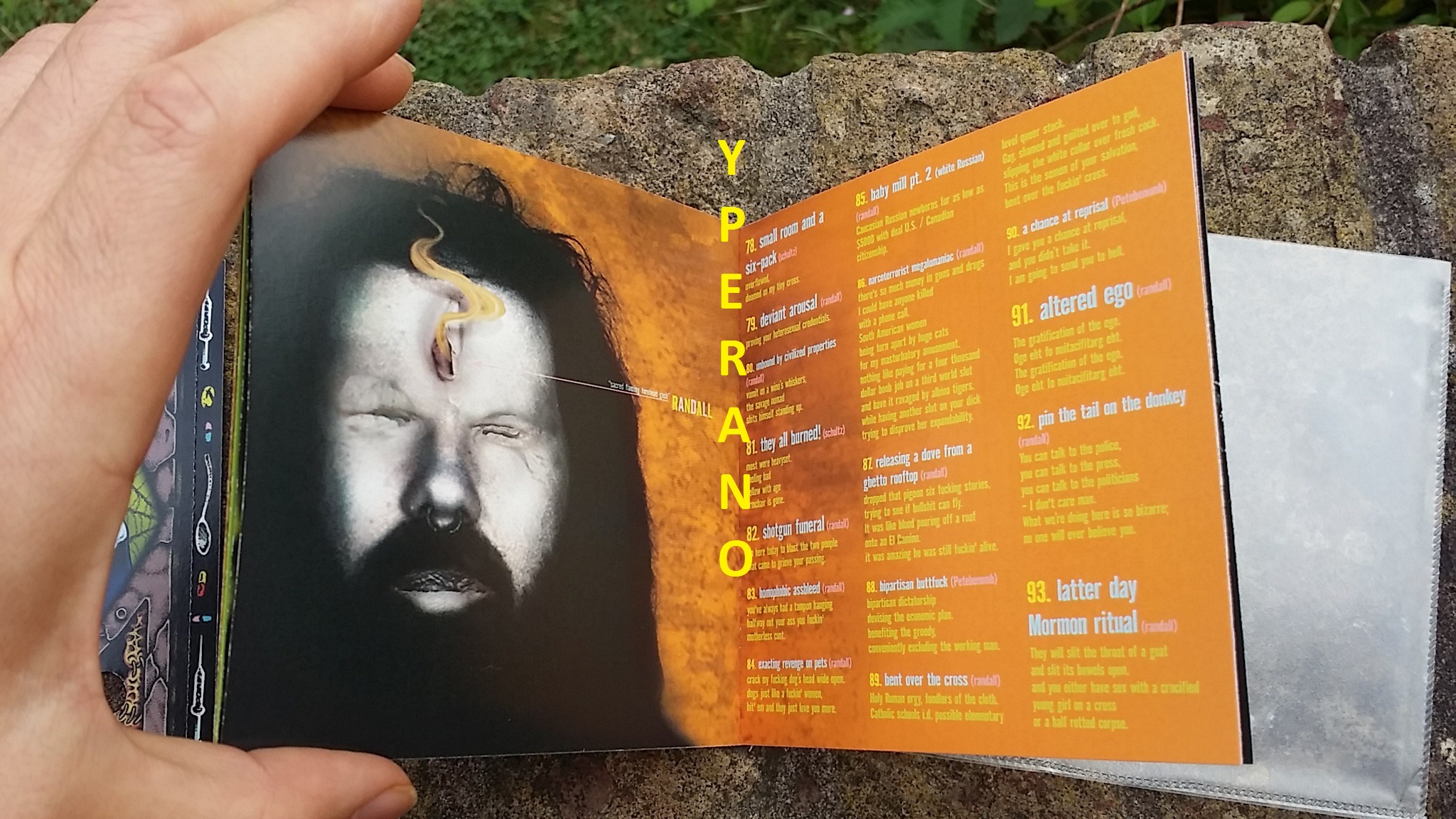 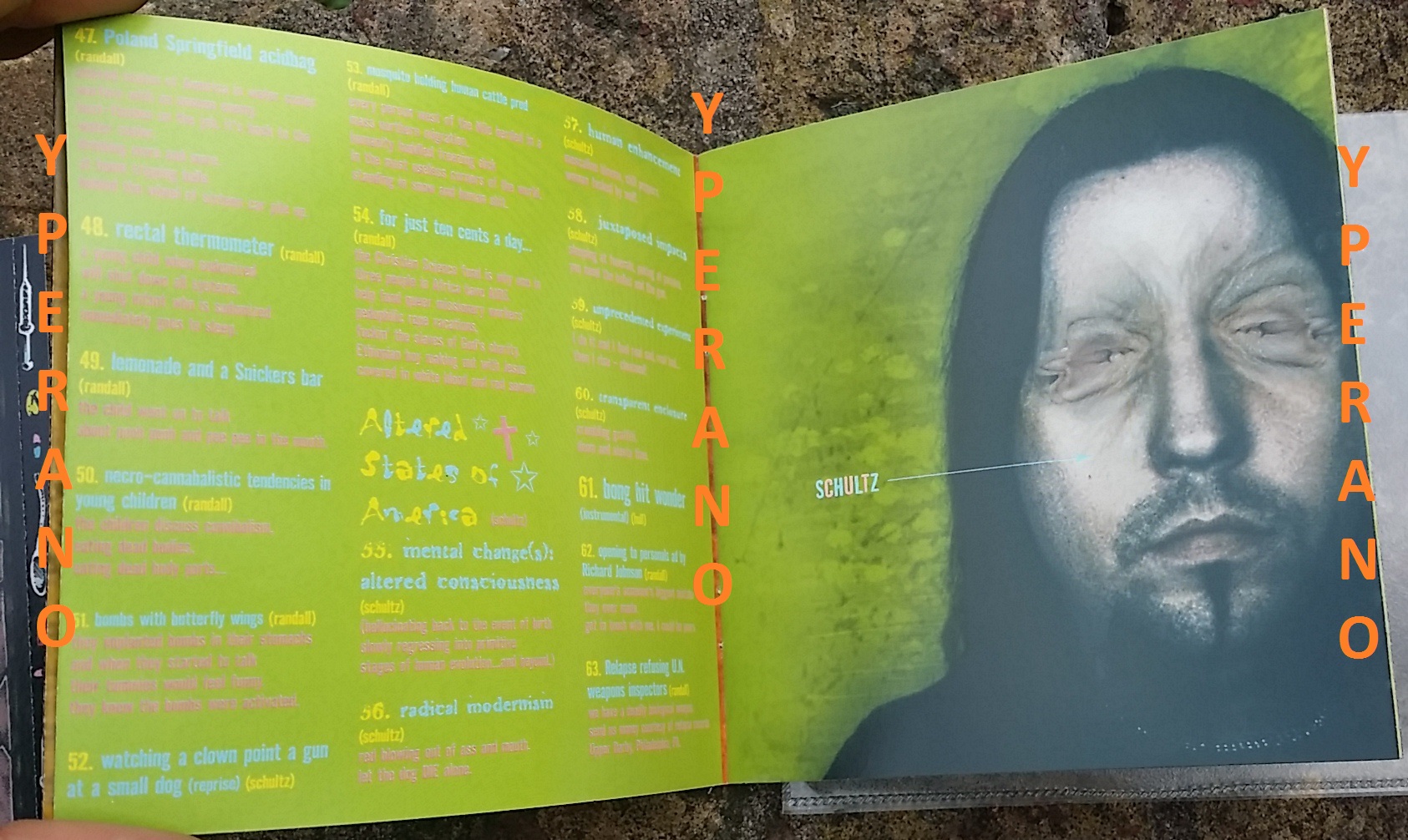 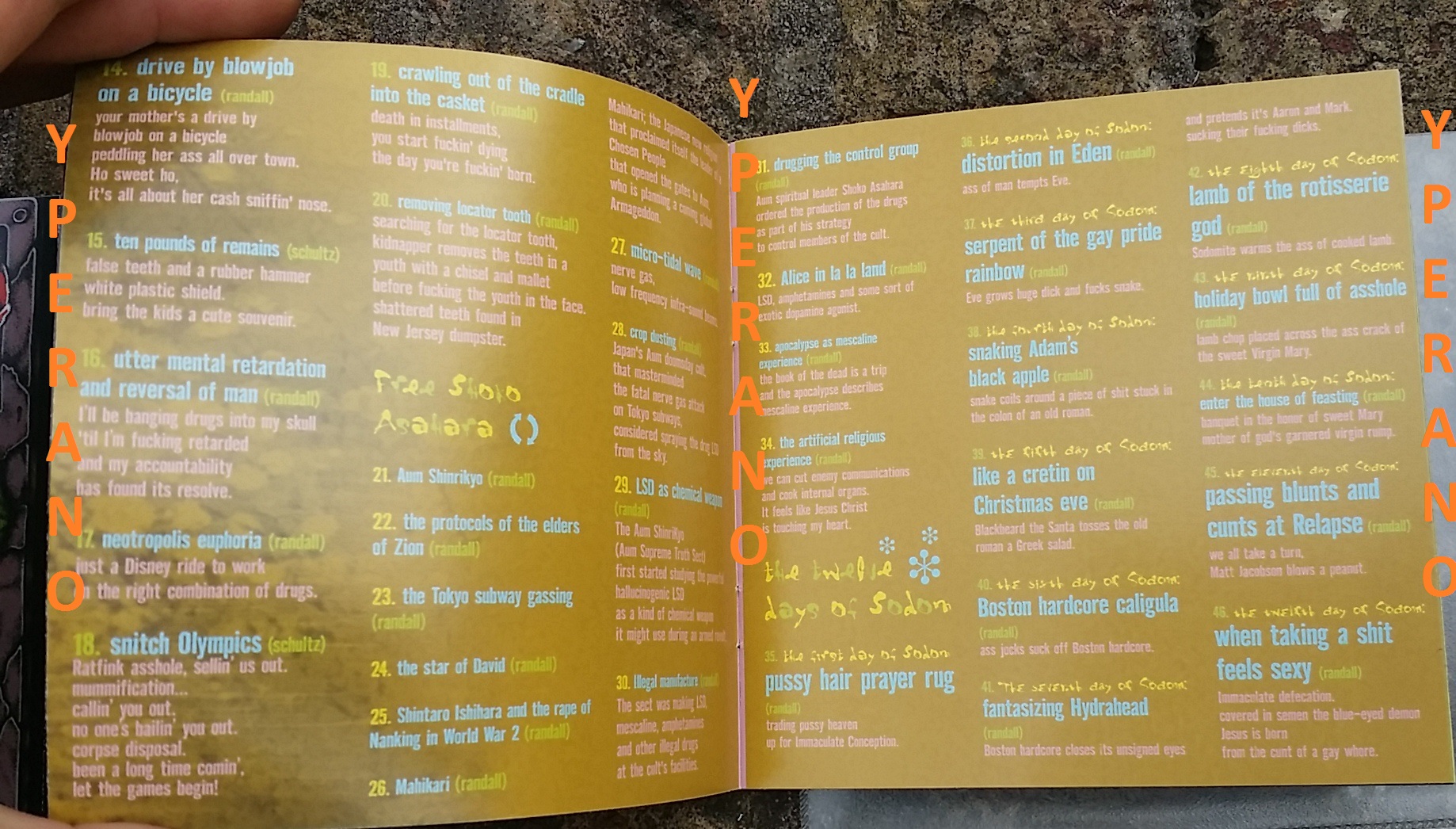 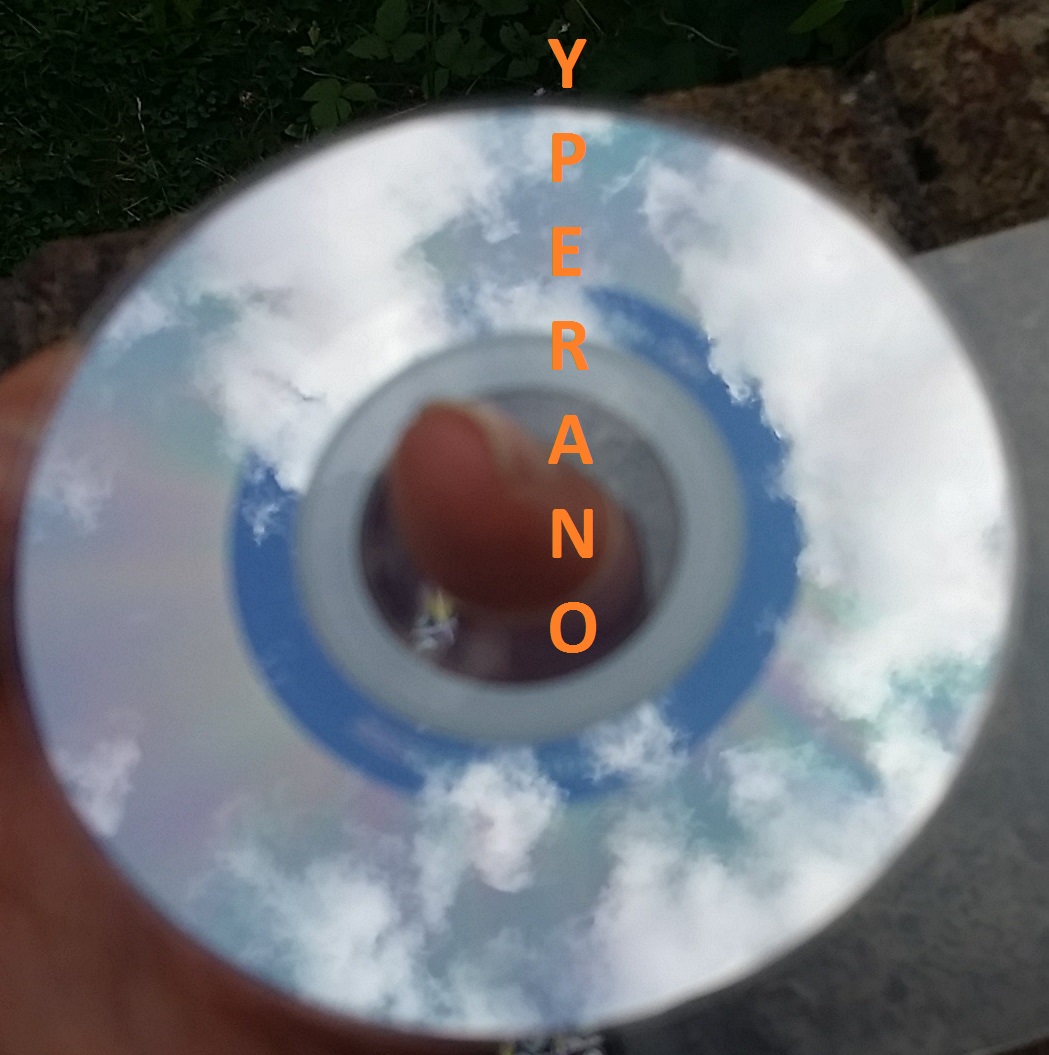 Be the first to review “AGORAPHOBIC NOSEBLEED: Altered States of America CD, not a regular, but a rare 3″ mini CD! acid-grind 2003. Check video + audio.” Cancel reply