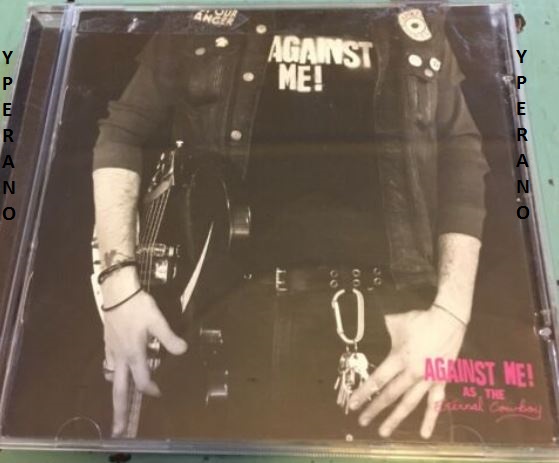 AGAINST ME: As the Eternal Cowboy CD punk / alt-country, w. some awesome acoustic songs. CHECK audio (whole album) + video explain why it is the Most Important Fat Wreck Chords Record!

Against Me! as the Eternal Cowboy is the second album by the punk rock band Against Me!, released on November 3, 2003 by Fat Wreck Chords. It was the group’s first release for the label and their first album with bassist Andrew Seward, who had replaced original bassist Dustin Fridkin the previous year. The album was produced by Rob McGregor, who had also produced their first album Against Me! Is Reinventing Axl Rose (2002). Two singles were released in support of the album, “Cavalier Eternal” and “Sink, Florida, Sink“, though each features different versions of the songs than those found on the album. As the Eternal Cowboy was Against Me!’s first album to reach the Billboard charts, reaching No. 36 on Top Independent Albums.

You can’t call Against Me’s new release a punk record. It is more than that. As the Eternal Cowboy is a successful blend of many different genres of
music, it is punk and alt-country, with awesome acoustic songs. I didn’t expect As The Eternal Cowboy to be a CD that I would want to listen to all
the time, but almost immediately I have the songs stuck in my head. “”You  Look Like I Need a Drink”” and “”Sink Florida Sink”” are well-written,
acoustic tracks. “”Clich? Guevara”” is an excellent high-energy punk song with a pop edge. The two guitars interact and mix really well; the vocal
harmonies work without overdoing it as boy bands do. “”A Brief Yet  Triumph”” is an instrumental track with an insane drumbeat. Some of the
songs totally remind you of Rancid, but in a good way, with strong bass lines and rough vocals. Against Me do have the songs about girls and love,
but include songs with a political message without stuffing it down your throat

Track listing
1. T.S.R. (This S*** Rules)
2. Cliche Guevara
3. Mutiny on the Electronic Bay
4. Sink Florida Sink
5. Slurring the Rhythms
6. Rice and Bread
7. a Brief Yet Triumphant Intermission
8. Unsubstantiated Rumors Are Good Enough For Me (To Base My Life Upon)
9. You Look Like I Need a Drink
10. Turn Those Clapping Hands Into Angry Balled Fists
11. Cavalier Eternal

Against Me! announced plans to record the album in July 2003, stating that they would work with producer Rob McGregor, who had recorded their first album and two previous EPs, and that the album would be released November 4.  The band planned to record at Ardent Studios in Memphis, Tennessee, where they could make an all-analog recording with very few overdubs.  In order to ensure that McGregor would be familiar with the new songs by the time they went to Memphis, the band recorded demos for the entire album at his Goldentone Studios in their hometown of Gainesville, Florida on July 15 in the span of a few hours. The rest of the album was recorded that August at Ardent. The version of “Cavalier Eternal” from the July 15 Goldentone session was used on the album, as Fat Wreck Chords head Fat Mike preferred it to the version recorded at Ardent.  The entire Goldentone demo session was released in 2009 by Fat Wreck Chords as The Original Cowboy.

Against Me! as the Eternal Cowboy was mixed and engineered by Pete Matthews and assistant engineer Adam Hill, and was mastered by Brad Blackwood at Euphonic Masters. Singer/guitarist Laura Jane Grace designed the album’s artwork and layout, using photographs taken by Bryan K. Wynacht

Grace described the record in 2003 as a concept album “that explores love and war”, explaining an ambiguity with regards to the album’s title’s reference to its songs: an Eternal Cowboy can be “symbolic of the power structure” or of “someone forever wandering, lost and alone”

Critic Charles Spano of Allmusic gave Against Me! as the Eternal Cowboy four stars out of five, remarking that “The Gainesville, FL, outfit may have embraced a slightly slicker production than with its fan favorite, Reinventing Axl Rose, but no matter how you stack it, As the Eternal Cowboy is an accomplished record of country-folk-punk that would only qualify as over-polished by the most hard-lined, anti-bar code punk kids’ criteria. He also called it “one of the few early-2000s punk albums that transcends its genre and has the rock & roll clout to storm the mainstream.  Nick Greer of Sputnikmusic also scored the album four out of five, noting that “This CD is the first in their discography to include a more rock feel to the music. The drumming is slower, the background vocals less prominent, the singing less gruff and less like screaming. Some songs are riff-based instead of chord progression-based, which utterly betrays punk and folk alike for rock and roll. This change, an obvious turnoff for original fans, isn’t terrible.

All lyrics are written by Laura Jane Grace; all music is composed by Grace, James Bowman, Andrew Seward, and Warren Oakes.

Be the first to review “AGAINST ME: As the Eternal Cowboy CD punk / alt-country, w. some awesome acoustic songs. CHECK audio (whole album) + video explain why it is the Most Important Fat Wreck Chords Record!” Cancel reply 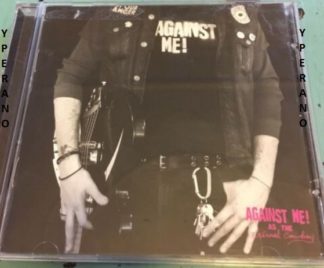 You're viewing: AGAINST ME: As the Eternal Cowboy CD punk / alt-country, w. some awesome acoustic songs. CHECK audio (whole album) + video explain why it is the Most Important Fat Wreck Chords Record! € 3.59
Add to basket