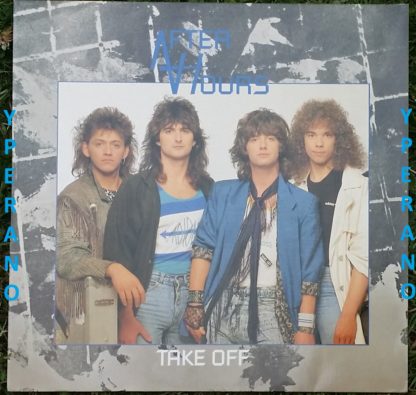 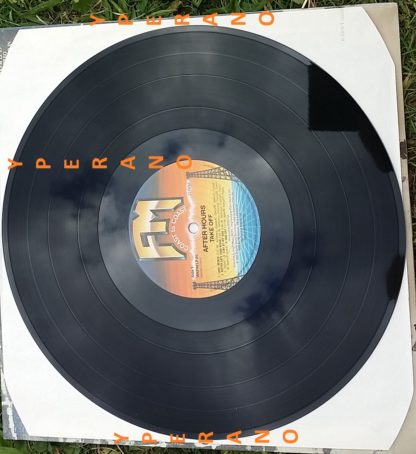 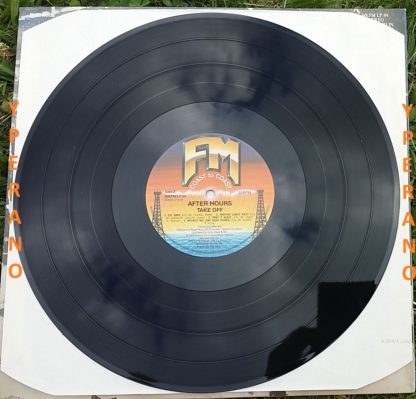 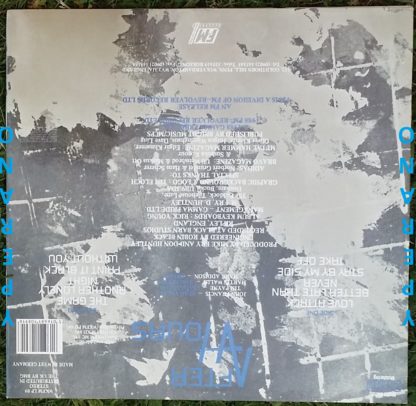 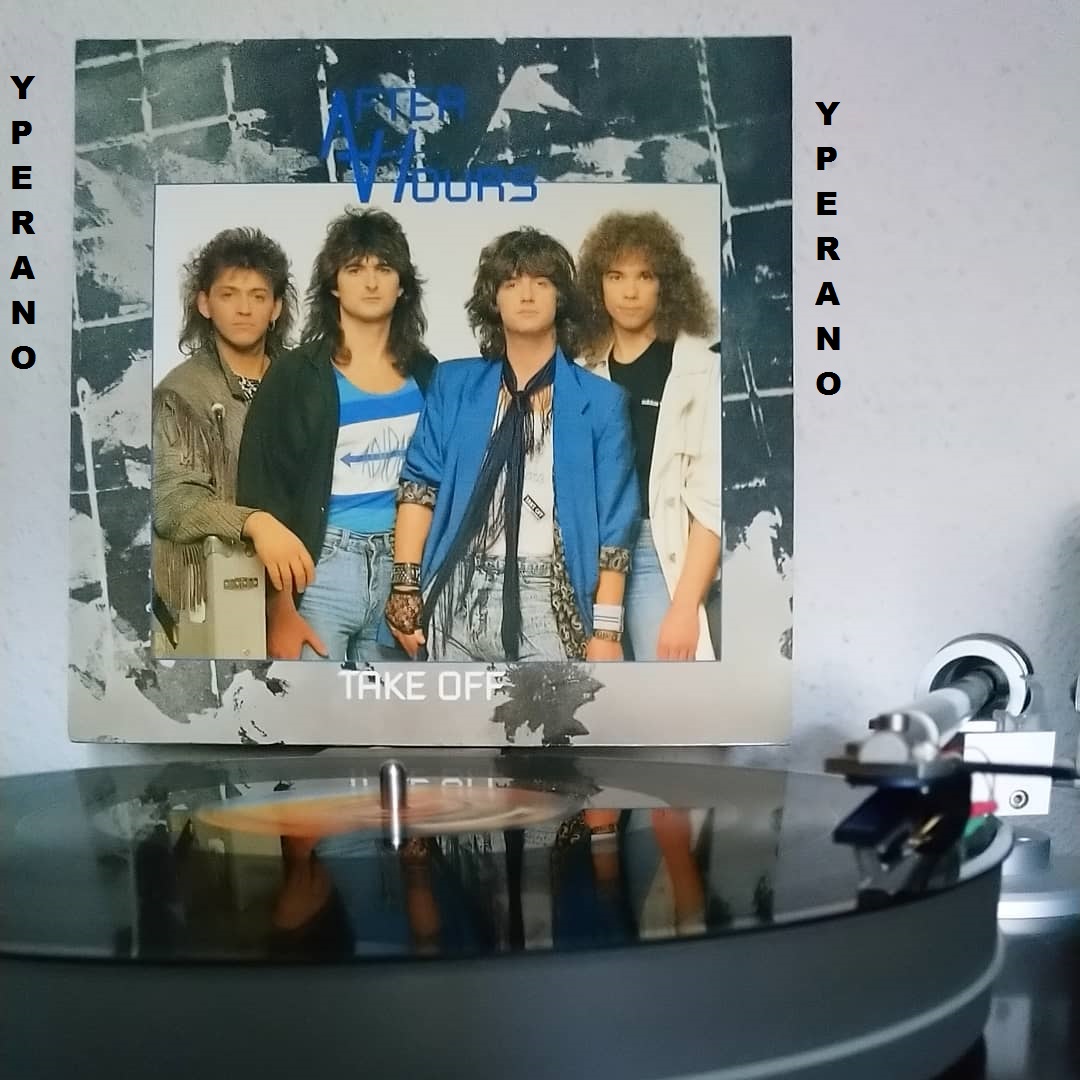 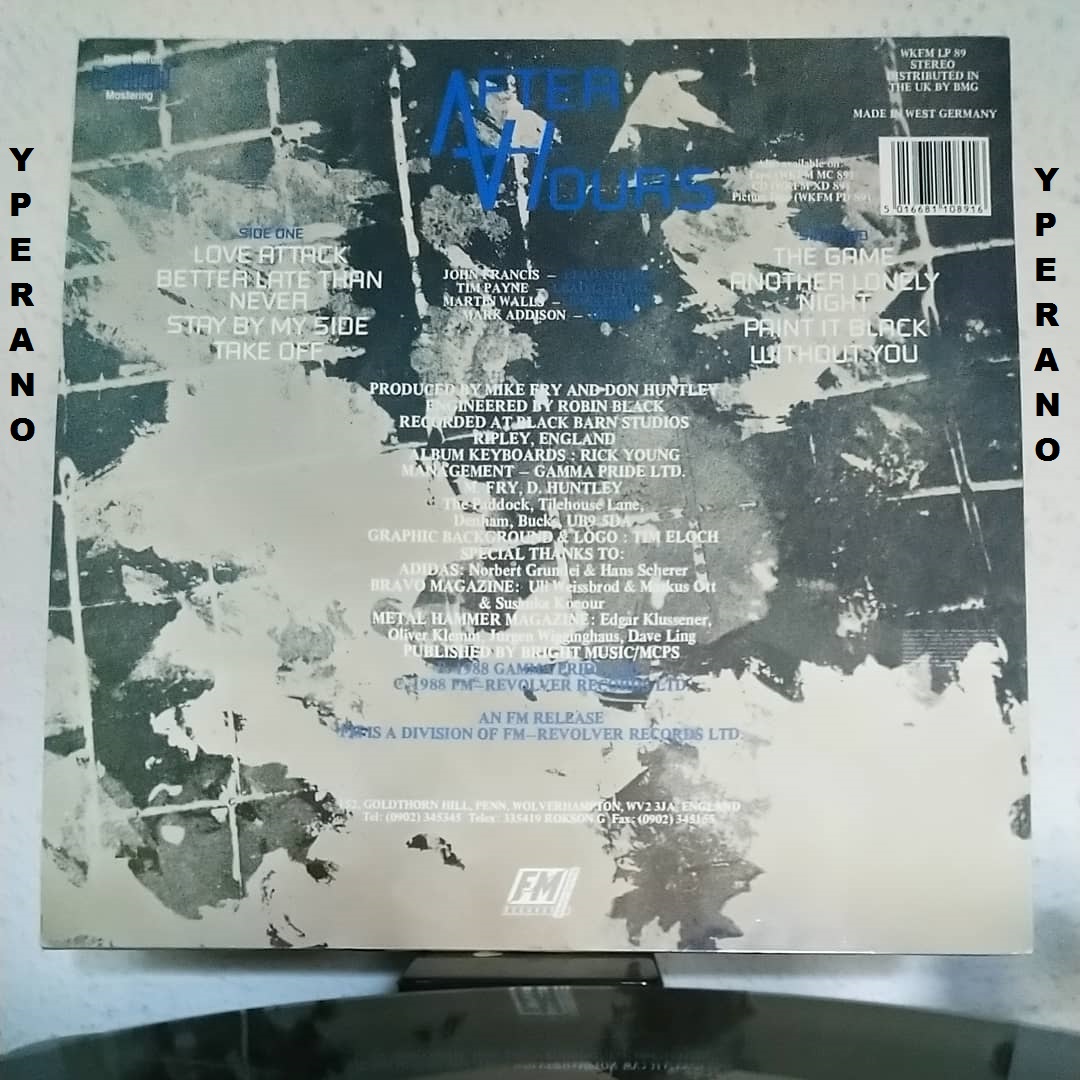 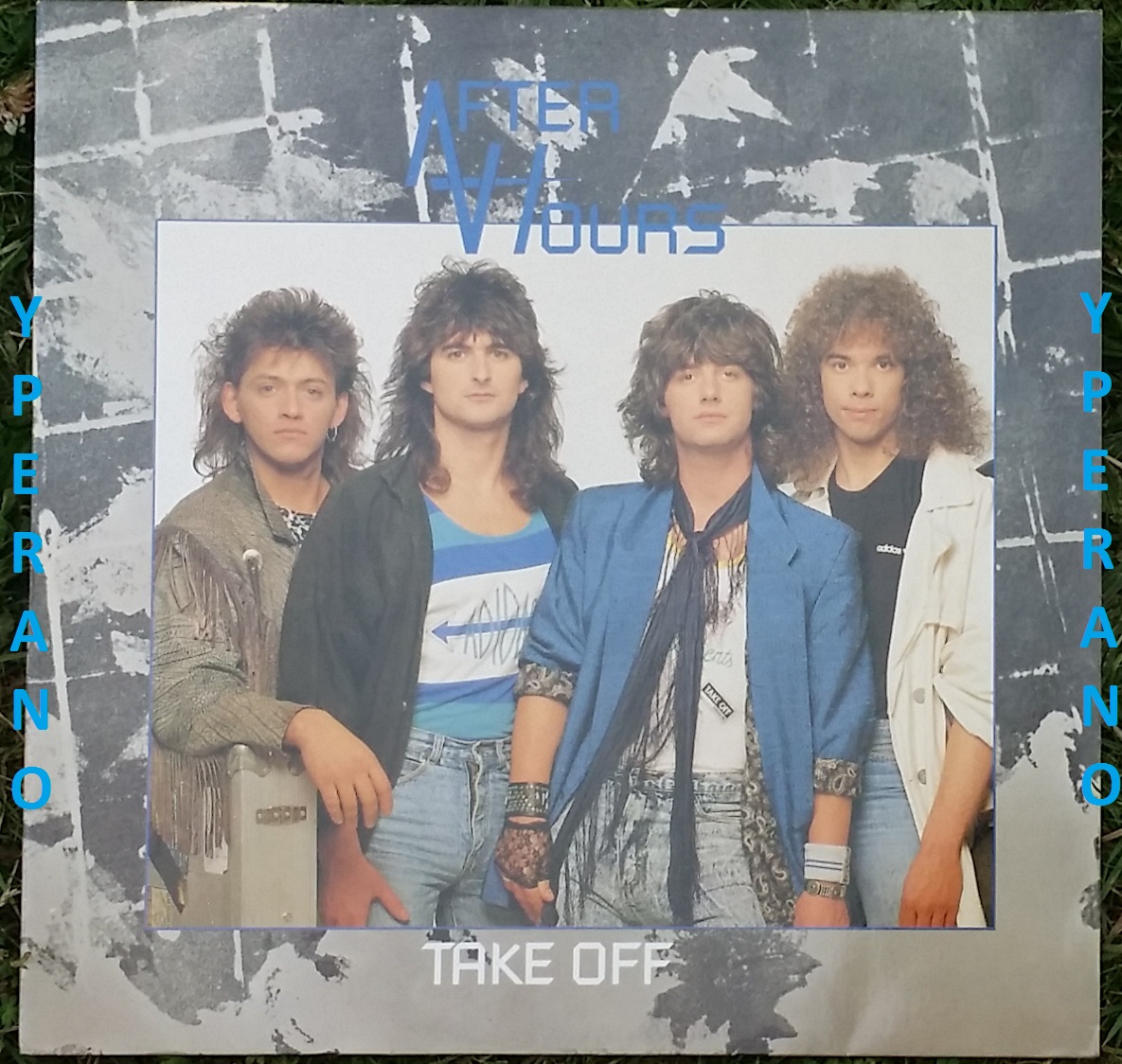 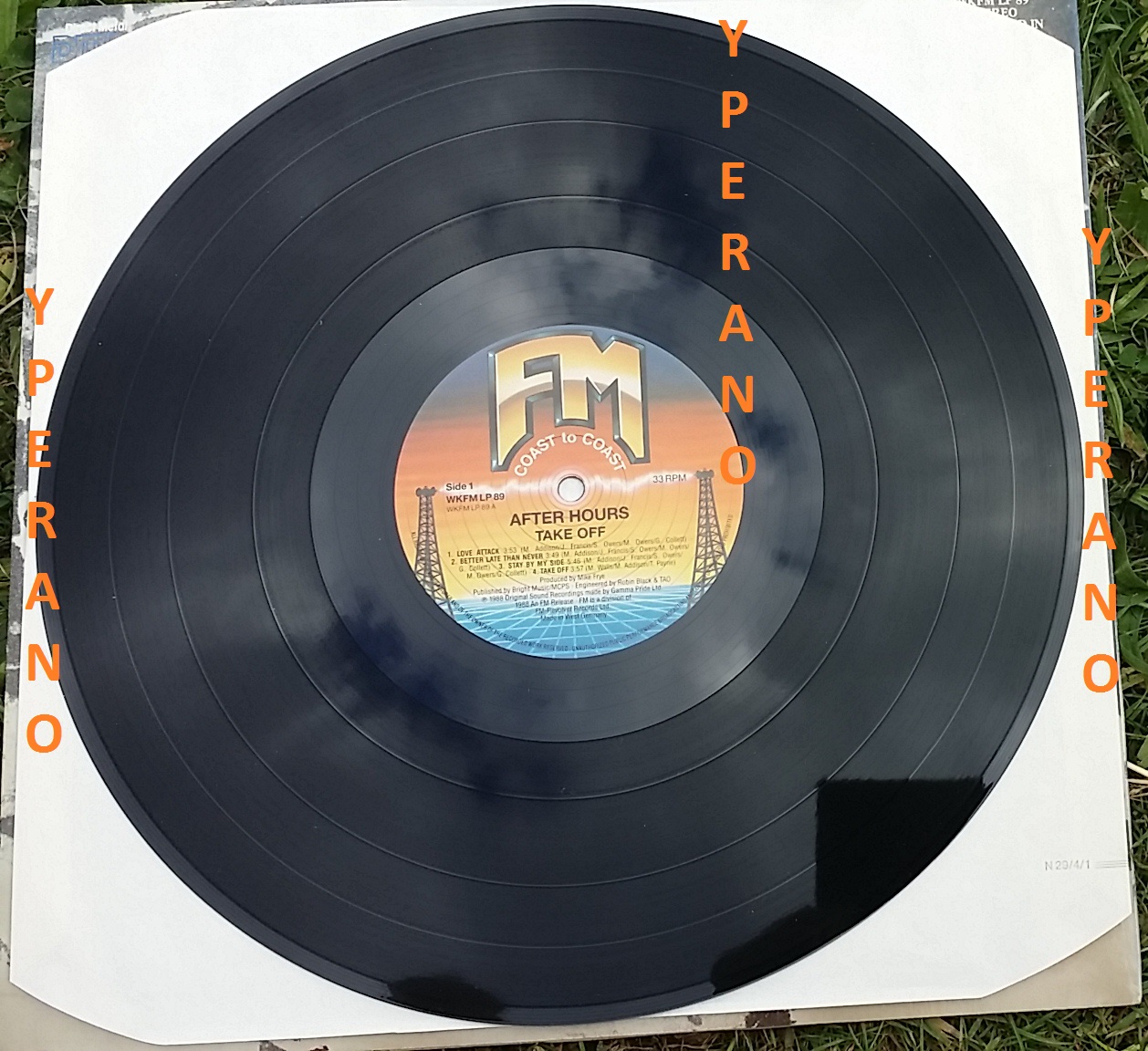 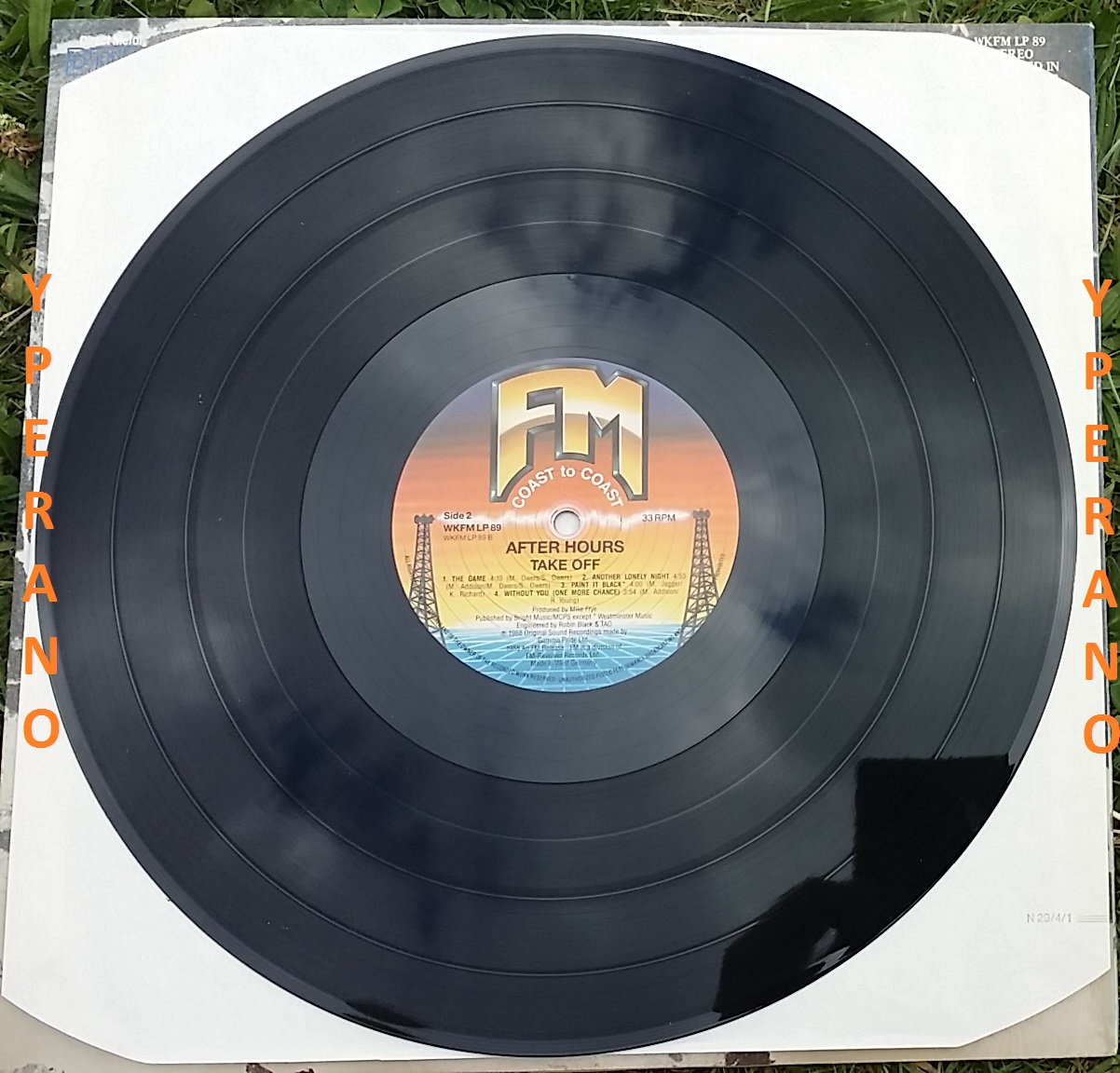 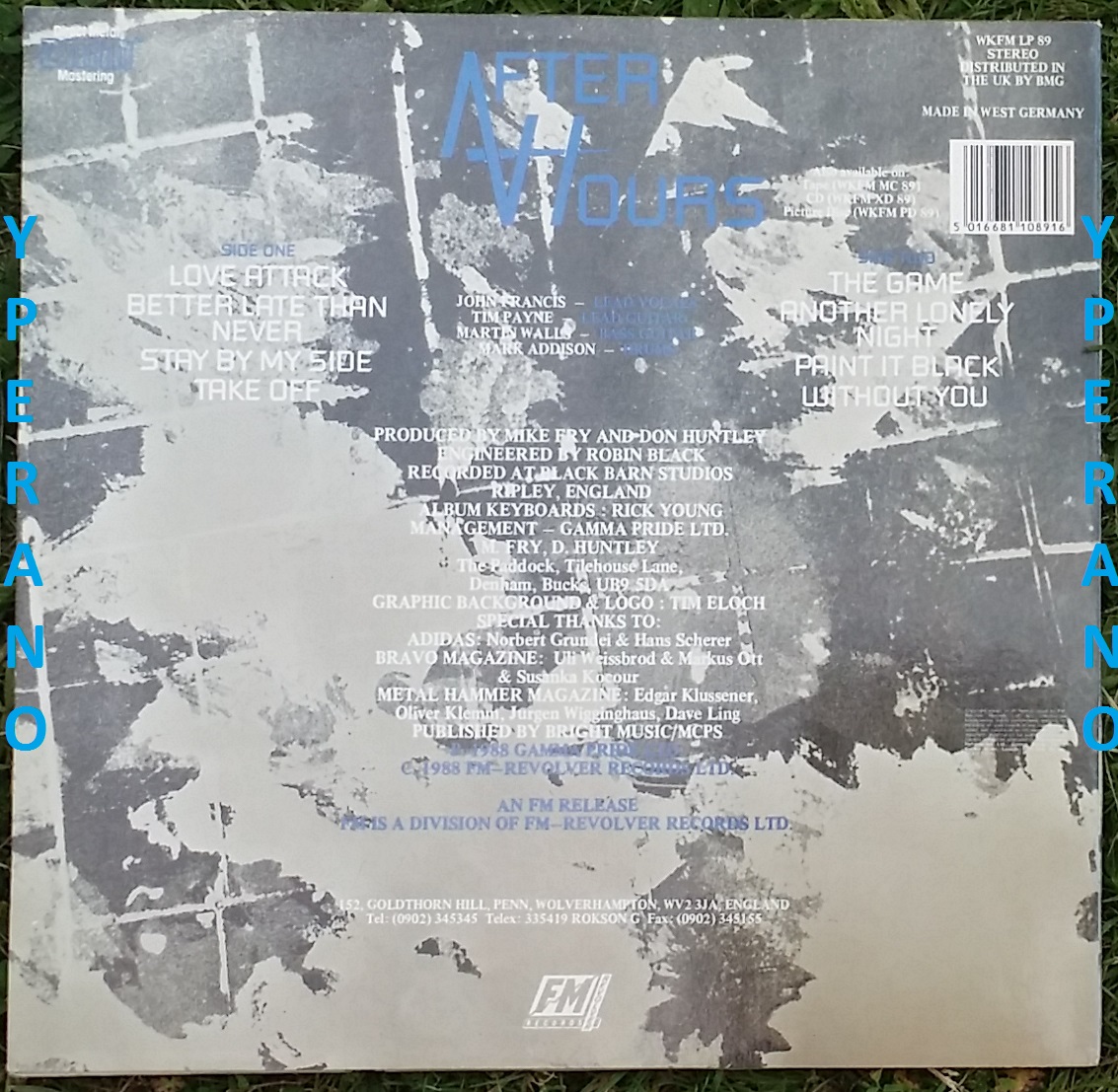 Southampton based melodic rock band that featured ex-IDOL RICH vocalist Mark Thompson-Smith and identical twins Mark and Steve Owers on guitar and bass before they departed to form TOUCHE then LIONSHEART. Andy Nye is an ex-MICHAEL SCHENKER GROUP veteran. The AFTER HOURS debut album ‘Take Off’, which included a cover version of the ROLLING STONES ‘Paint It Black’, was produced by the esteemed Robin Black. Drummer Alan Jackman, previously with THE OUTFIELD, joined a later line up in 1989. Walls was to depart in favour of Dave Marshall the same year. Francis joined BLACKCAT, actually an incarnation of Birmingham AOR act SHY, for a brief period. Thompson-Smith joined FLIGHT 19 and PRAYING MANTIS, conducting a tour of Japan with the latter. Singer MARK THOMPSON SMITH later issued solo product (AVAILABLE HERE!!!!!!!!!!)

This one is an 80ies classic. Strong album with the best cover of “paint it black” I´ve ever heard.

—–
Very good AOR album! With strong vocals from John Francis and some really nice songs. Just listen to “Better late than never” and the best track on the album “Another lonely night”…it´s perfect AOR. They sounds a bit like Tradia but with a little harder edge.
—–
Buen LP de AOR con un cantante de voz muy personal. Buenos temas. Great AOR LP with good songs and a good singer.
—–
Hey Man! The Album is a top AOR record! An the song “Paint it Black” in this version is one of my all time favourits. A real Killer!
—–
best album i have ever heard

—–
fantastic band, fantastic songs, AOR heaven, majestic paint it black, catchy songs like better late than never or fantastic megahit Another Lonely Night, AOR killer, great voice!
—–
This is a good example of 80’s melodic rock, very “rockmantic”,rock me in the sweetest way. Remind me a bit of Da Vinci, but it got heavier distortion. Give more keyboard and dont ever cut those big hair.
—–
Very good melodic rock. Good solid AOR / melodic rock LP
—–
Excellent melodic AOR 10/ 10
—–
I was amazed the first time i listened this album.It’s a killer. “BETTER LATE THAN NEVER” awesome!!!!.
—–
fantastic 1st album! don’t miss it! awesome melodic rock songs, colorful music. love attack, take off and another lonely night my favourite songs on this beautiful album. j. francis vocal performance is tuff. whole band is talented. cant be disapointed about this album, buy it!
—–
FANTASTIC ALBUM…. Im so privileged to be his daughter !! He only has to sing one note and im hooked!!! He’s incredible!!! And still going strong!!! Also, thanx for everything you’ve said… means alot!!! xxx
—–

I can’t imagine why After hours didn’t become AOR staples of the 80s, their sound is polished yet lightly melodic, John Francis certainly has one great voice, can only really compare his voice to Steve Perry (of Journey), but deeper and more soulful. There are some really good songs on here such as ‘Another Lonely Night’ and ‘Without You’, there are some RAR files of this album on the internet, if you search you shall find! Very good album…

—–
A lost gem of the AOR genre.Excellent songs, soulful vocals, great keys.They reminded me of FM or JOURNEY for some reason.”Better Late Than Never” & “Another Lonely Night” they are really astonishing tracks.The cover of “Paint It Black” is also fantastic.This album is a pure 80s superb AOR! (9.5/10)
—–
Very good LP! Perfect catchy AOR/MHR with lots of keys and great hooks!
—–
Excellent, just listen to “Better late than never” and you’ll think that this is a classic. Top notch record.

—–
A fantastic album and a great band! What an album just pure AOR, had this one for a few years and I still love it. John has a great voice sounds like someone 10years older the keys and guitars are excellent just buy it… KEEP ROCKIN ALL!!!
—–
This is one of the finest AOR bands coming out of the UK during the 80’s. This LP has it all……the voice, explosive keyboards, sweet guitars, uptempo melodic songs loaded with harmony……an AOR listener’s delite!!! There’s also an awesome cover of “Paint It Black” you won’t want to miss. Fans of early FM-UK, JOURNEY and BLUE TEARS will totally enjoy this LP as I did!!!
—–

stonking AOR masterpiece that is the debut album from After Hours.
The Southampton based AORsters had a brief foray into the world of Adult Orientated Rock that was short-lived and only consisted of a couple of albums (‘Take Off’ and ‘After Hours’) in the late Eighties/early Nineties before splitting up and going their separate ways. Lead singer John Francis had a brief tenure with Shy (check out the demo of ‘What Love Can Make You Do’ on the Shy Anthology) before disappearing completely with nothing being heard of any of them since. Now, with the history lesson over I’ll let the music do the talking…

‘Love Attack’ is an AOR masterpiece that deserves its place in the hearts of every AOR fan. How this band never broke the big time is a case for the criminal justice system or merely a case of bad timing. John Francis has the voice of crushed velvet with the soul of a man who has loved and lost a thousand lovers.

‘Better Late Than Never’ is up next, a belter of a song is this. The guitars of Tim Payne gel together the THAT voice… and I’m 16 again.

‘Another Lonely Night’ is the AOR masterpiece hit that never was. I mean if Journey released this song it would have been classed as a mega hit, but as it came from a UK band it was destined to be an undiscovered gem. This is the basic rule for this album and the one that followed. After Hours and especially John Francis were destined to be so much more.

Check out their cover of the Stones’ ‘Paint It Black’ which in my mind is the best version of the song EVER! And I HATE that song! So for a band to register it listenable to these ears is a feat done by no other!