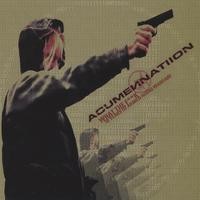 Once an original part of the coldwave music scene that fused guitars with industrial music Acumen Nation continuously evolves, adding the sounds of drum n bass, breakbeat, and hardcore into the mix over the years, resulting in a harsh amalgam of metal and electronics.
Before they launch into a new decade of armed audio warfare, they have decided to pause and recollect on their 10+ years as Acumen and Acumen Nation. Their WTII debut is not really a debut but more of a collection assembled to celebrate the bands extensive history. What The F**k is a 10-year remix retrospective, containing 14 never-before-heard versions of tracks from their catalogue plus 2 new tracks. With hard hitting tracks like Bleed for You, DJentrify plus the mega clubhit Gun Lover, What the F**k is a solid release from start to finish. What the F**K contains guest vocal appearances from Lucia Cifarelli (KMFDM) and Eric Powell (16 Volt).