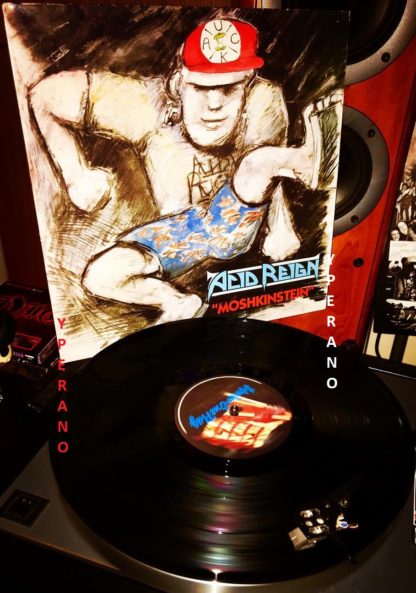 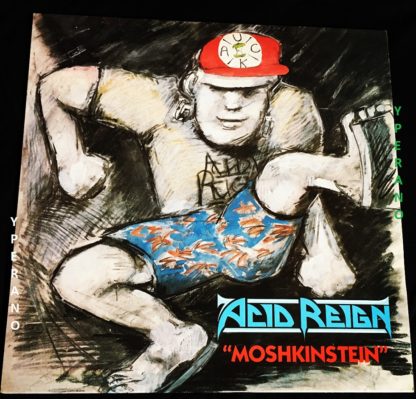 Better Than You’d Think
When I discovered this UK band, I was thinking they were Anthrax clones at first with the campy cover art and NYHC knockoff logo on the cover as well. Not to mention the title with the word “mosh” in it that the New Yorkers popularized. And to my pleasant surprise they weren’t at all. Acid Reign were slightly heavier and more straightahead than Anthrax were by this time, not quite as skilled as players, but making up for that with plenty of enthusiasm and attitude.

Despite a slightly mushy production–hey, its a debut–the LP surges right at you with unabashed energy from the get-go. Hs clear and high-pitched vocals radiate charm with a prominent Brit accent and the rest of the band are right behind him blazing away. The drumming is simple but spot-on and the guitar work is simple and direct, with the bass buried in the mix as always and most likely just following the roots anyway.

For the most part they stay in speedy uptempo mode, with slower bits here and there and alternate pretty effectively. There are no mosh parts as we know them today (no sludgy breakdowns for the Ozzfest brats to punch each other up to, in other words), but the ones they have are the more energetic old school hardcore-style variety that make you want to jump around and slam into your fellow concertgoers, as opposed to punching them and kicking them in the head.

Acid Reign certainly had limitations–Hs vocal range, the guitarists’ relative lack of technical prowess in the lead realm–but they worked with and around them admirably. This is part and parcel of their charm and overall feel, so you can’t help but give them credit for trying so hard and working so well together. And anyway, this is, as I said, a debut, so you get the sense that they are really eager to hit their stride and show you what else they can do.

If you can dig this up somewhere, whether online or in a store, its definitely a fun listen. If you want to lighten up from “br00tul death metal” or “kvlt black metal”, this is a good choice, and there are worse things you can be listening to out there, believe me.

A mismatched cover and book I almost burned alive.
my mother, she told me off today, and so I killed her

Man, I wanted to garrote this band when this eps title scraped across my ears with its obvious declaration of fun thrash or insipid, zippity hardcore.

I wanted to splinter some shins when the fruit-flavored and faggy, post-Armed & Dangerous/Anthrax-mentality cover art sailed into view. Whats he have on his feet, sandals? Metal and friggin sandals?! To match his gay shorts I guess.

I carved the back cover proclamation Acid Reign are the square-danciest band in the world into my Little League bat just in case they were ever in swinging distance.

Then theres the dippy band photo with Hs leg kick the center of frustration.

At the time, the fun and games attitude that moshed its way into the latter half of the decade frosted my shorts right up to my brainstem, and this eps visual landscape coins everything I loathed about that part of my precious, metallically mirthless scene, my burning thrash hell that was heaven to me. I blame Anthrax – Injun hats, jams, NOT, Im the Manall swirling ingredients in this recipe for stupidity. Any kind of logic at the time wouldve pointed to the all-out glam and melodi-rock plague to be my biggest heartburn producer, but this stuff irked me more. Glam was poser material from day one, for both the eye and the ear, and you saw it coming a mile away hair that would get caught in a ceiling fan, fruity sashes wrapped around tight zebra-print leather pants, feather earrings and tasseled jackets, a shirtless guy wearing red suspenders with a pucker on his lips, white lace gloves cupping a crotchdammit.
– but this was a metamorphosis of a once proud and destructive force that had been streaking across the underground sky like lightning for years, the then Darth Vader of metal styles. Suddenly, DV was dressed to ride a skateboard down to the beach. Chains, denim and leather were transforming into chromatic, boxer-like shorts and upturned-brim baseball caps (despite what theyre mostly wearing in the back photo). Caught in a friggin mosh. Mosh, mosh, mosh. Rubbish. For another stick in the eye, stuff like this not only coincided with, but also competed with the Bay Area logjam. Even Voivods war-like Korgull the Exterminator had escaped to some motorized tomorrow. Yes, I guess you could say I was grim (kvlt) for my day (unfortunately, I have only a few pictures).

Yet, when the thing took a spin on the ol Pioneer PLS40, I felt my blood pressure oddly dropping, and eventually I had to uncock my weapon. The UKs Acid Reign, I found out, are a wolf in sheeps clothing sorta speak. A scant few be-boppin stanzas aside, the five-piece is pretty on the straight-rolling ball, serious as a lump in your chest, and even weave some unexpected experimentation into the fracas. Of course, I wouldnt know this yet, so Goddess is the first track in my crosshairs, a track that saves itself from the hammer with some none-too-exciting, but tolerably bloodshot riffage. The Governor calls with a stay of execution for now. The chorus generates some power, and even though Hs standard sounding, oh-so-fleetingly aggressive hardcore edge isnt blowing my hair back, its at least bearable. Next, Suspended Sentence ambles along with a quiet stock motor, revs it up a little here and there, and launches a few quickly thick offenses to remain at the status quo. Freedom of Speech, a wordless wanderer where the notches of hope brighten, spreads its girth with a gnarly doom range and a flurry of unanticipated acoustics that wasnt at all on my mind as I scowled at the record sleeve.

But the biggest surprise is delivered with side twos Psycho-inspired (complete with film-snippet intro) Motherly Love, an extended quest that simmers modestly and with not much exasperation or a pace, but in a near seamless interlude dives into unforeseen vampire keyboards backdropped with cryptic innuendo. Whered this come from? With the keys subsiding, velocity flies in a brief sprint into a shorter, song-ending acoustical cushion. Unfortunately, the rather dull Respect the Dead fumbles the baton a bit despite a gamut of tempo changes, a flashflood solo by Kev and a short, vocally backed chorus. The title Chaos (Lambs to the Slaughter) rings true with early Nuclear Assault ferocity, thrash outweighing hardcore except in the vocals, and drives this ep home with a higher alarm fire than it started with.

The vox, of course, is the downer here. Something more volatile or even just irritated probably wouldve showered this with the real acid rain they most likely desired, but such are the woes of crossover.

More oddities prevail in the thanks list, hailing Tony Iommi no less than seven times (including one salute to Sabbath and one to Geezer Butler), but also names Suzanne Vega and Michael Jackson. The lyrics on the same page have nothing to do with the cover detail as well, and from worldly and competent standpoints are average at best.

Okay, the gravity of this thing still isn’t sucking in planets, but at least the sniper rifle went back into its case shortly after the record flipped. Mellowing with the years as adulthood took over but still enjoying my metal, I realized I don’t have to listen to those bands if I choose not, a revelation of all revelations (duh). I’ve since replenished all that psychokinetic energy I burned to hate this band before note one was even heard. We live and learn. Now I despise animal cruelty. I want to be a hit man for the ASPCA. I really do. 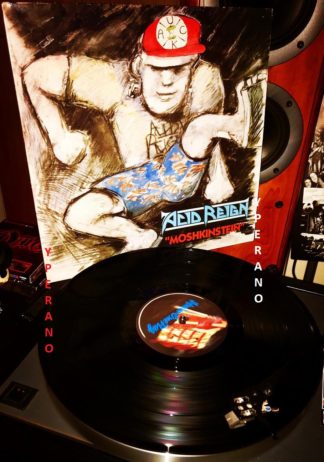